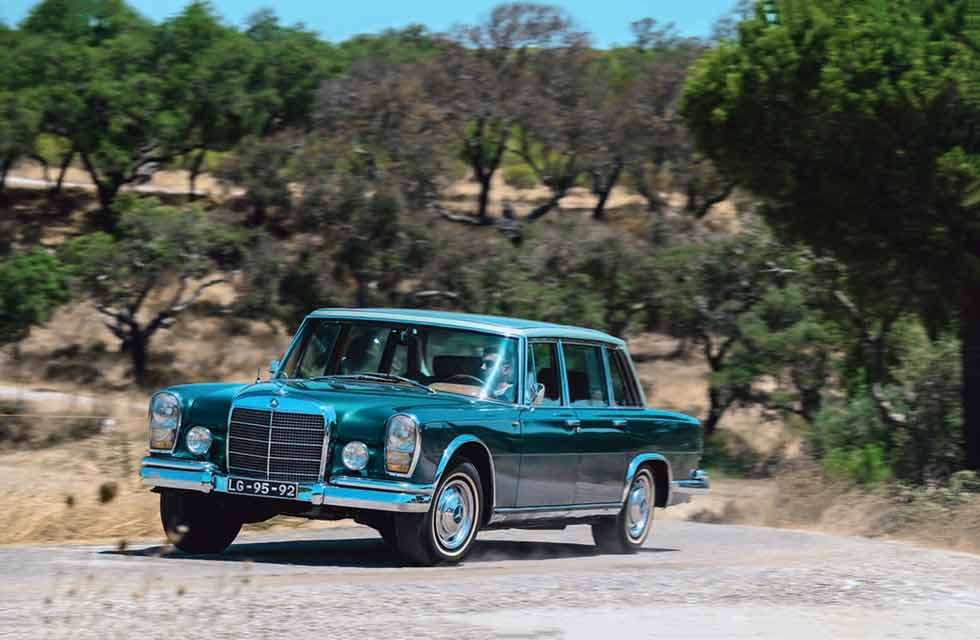 Nubar’s Green Grosser Driving the one-off, glass-roofed 600 limo that Mercedes said couldn’t be done. There were no glass ceilings for millionaire playboy and oil magnate Nubar Gulbenkian, but that didn’t stop him having one installed in his Mercedes-Benz W100. Words Greg Macleman. Photography Olgun Kordal.

There’s something strangely menacing and distinctly film noir about the Mercedes-Benz 600 W100. It’s difficult to even look at one without imagining that hydraulically- assisted boot snapping shut on you like a gin trap, tyres slithering on the rain-soaked cobbles of an Eastern European capital as you’re spirited off into the night.

But while the Grosser Mercedes proved a firm favourite of every tinpot dictator and third-world despot, from the cannibalistic Idi Amin to the war-mongering Saddam Hussein, it wasn’t solely the preserve of tyrants and fascists. For the celebrity in the 1960s and ’70s, nothing announced your arrival quite like this ostentatious Benz. Notable owners who didn’t subjugate entire peoples included peace-loving beatnik John Lennon, fashion icon Coco Chanel, and even a silk-robed Hugh Hefner; whether you wanted Bunnies in the back or dissidents in the boot, it was the ultimate status symbol throughout its 18-year production run.

Nubar Gulbenkian, the first owner of this example, counted himself in the second group following his own innocent brush with despotism – as a child he escaped Ottoman Sultan Abdul Hamid II’s persecution of the Armenians. Educated at Harrow and later Cambridge, Gulbenkian was by all accounts an international playboy, known as much for his impeccable manners and enthusiasm for the institution of the English gentleman as his love of the good things in life. The dashing and flamboyant oil magnate was rarely seen without his monocle or a fresh orchid in his buttonhole, a taste for the eclectic that extended to a fascination with fast, luxurious and rare automobiles.

That a W100 would eventually pass through his hands was never in doubt. Setting out its stall in 1963, the 600 picked up where the 300d ‘Adenauer’ had left off as a luxurious express for the great, the good and otherwise, a favourite of politicians and movie stars the world over. The limousine is perhaps the only car of the era to rival the likes of Rolls-Royce and Bentley for comfort and performance. Once the world’s most expensive car, the 600 was a statement of intent as much as a means of getting from A to B. Gulbenkian was no stranger to luxury cars, having owned a string of Rolls-Royces of a particularly unusual flavour – including a few that the firm was decidedly uneasy endorsing.

Among the most spectacular was a Hooper-bodied Silver Wraith with a vast glass roof that the bon vivant used while touring the Côte d’Azur, and which eventually found its way into the basement of a nightclub in Nice.

In 1966 Gulbenkian approached Mercedes with a request that a similar full-length transparent roof be fitted to a new 600 sedan. Much to his consternation Mercedes baulked at the idea, claiming the modification would compromise the structural integrity of the big saloon – this despite famed torsional rigidity that gave rise to several open-topped landaulet models. Frustrated with the decision, the oil baron took matters into his own hands by commissioning a standard 600 short-wheelbase saloon via a French Mercedes dealership using a false name.

With his DM82,000 prize now acquired, Gulbenkian tasked Parisian coachbuilder Henri Chapron with turning his dream into reality. The work cost more than the car itself, with the lion’s share of the bill attributed to the enormous one-piece Triplex panel spanning the entire length and width of the 600’s roof. Gulbenkian specified a fabric shade like the one in his Wraith for shelter when the sun was at its height – though he had originally planned for layered glass with an opaque-fluid-filled cavity to achieve the same effect. The rear seats, meanwhile, could be folded flat to form a double bed so that its owner (and no doubt a few specially invited guests) could gaze at the stars.

The modifications didn’t stop there. As with many of his cars, Gulbenkian had the exposed wood clad in hide, necessitating the entire interior be removed from the car, and had a supplementary speedometer, fuel gauge and Speedpilot rally timer fitted to the central divider. The playboy had a penchant for speed as well as luxury; when not at the wheel he would often enjoy the ride from the rear compartment, offering encouragement to his chauffeur, Wooster. In the immediate post-war years he raced a young Alan Clark from Estoril to Sintra, Clark at the wheel of a Jaguar SS100 and Gulbenkian animatedly directing traffic from the rear bench of his Buick Super, one eye on his personal speedometer and the other on the road ahead.

Other details to adorn the interior of the Mercedes-Benz include a well-stocked minibar, and pipe holders fitted to each rear door. Additional glass deflectors were mounted at the back of each rear window to reduce buffeting from the wind while still allowing fresh air in to what must have been a stifling hot cabin. The tiny interior handles seem at odds with the car’s scale and bring to mind silver spoons, matching a turned alloy dashboard embellisher – the dash itself is clad in matching hide – and period Becker Mexico TR stereo. Opening the heavy doors reveals the coachbuilder’s kickplates covering each sill, adding to the list of delicate French touches that help soften what is otherwise a great anvil of a machine.

Outside, stunning jade green paintwork was specified from new, with a softer pistachio hue for the roof and D-pillars, while Chapron added its customary motifs to each door, plus gold pinstripes that run the length of each flank. Its party piece is undoubtedly the Triplex roof, moulded beautifully to match the lines of the original design. Stress cracks are beginning to appear at each corner, suggesting that Mercedes’ engineers were right, but, despite its flaws, the ambitious endeavour was worthwhile. Sitting on the rear bench, the sense of occasion added by the transparent ceiling is almost indescribable. You feel as though you’re lounging in the back of a plush rowing barge gliding along the Nile; to do so at night on the winding roads of St Tropez or Monte-Carlo must have been truly magical.

Gulbenkian was no doubt drawn to the Mercedes for its performance credentials as much as its interior appointments. The outgoing Adenauer’s straight-six would never have done justice to the 50% weight increase of the Grosser, so engineers employed an all-new 6332cc V8 with single overhead camshaft per bank, mechanical fuel injection and an output of 247bhp. And while around 50bhp of that total was devoted to powering the 600’s hugely complex 150bar hydraulic system, which controlled the seats, windows and even the bootlid, what remains is enough to propel the heavy-weight Benz to 60mph in less than 10 secs and on to a 127mph maximum.

With such a focus on the comfort and relaxation of its passengers, the intimidating rumble of later Mercedes V8s is instead a muted exhaust note from which you are further insulated when inside the car. The four-speed automatic gearbox is operated by column change and there’s a soft mechanical thud as drive is engaged and the Mercedes begins to waft gently along. In contrast to its oil-tanker six-door stablemates and gargantuan Pullman cousins, the 600 feels quite manageable in short-wheelbase specification, and sits high with a commanding view of the road ahead; by modern standards it could almost be considered narrow.

Though complex, the famed air suspension combines well with front double wishbones and rear low-pivot swing-axles to endow the 600 with a world-class ride that effortlessly smooths the ruts and bumps of rough Portuguese roads. It’s even more effective when pressing on, gamely doing its best to limit body roll and offering greater levels of grip than you have any right to expect given its 2600kg dry weight. It takes a judicious stab of the organ-type accelerator to break the Mercedes’ air of calm togetherness, but, when you do, the rear wheels lose traction quickly and something of a growl is finally teased from the vast eight-pot engine. Despite all the inertia of a newly classified planet, the 600 proves majestic on the charge, riding the rough surface with smoothness and taking corners with a composure that belies its dimensions.

As unexpectedly engaging as the Mercedes is as a driver’s car, there’s no doubt that it’s best experienced from a passenger’s perspective: in the case of its first owner, with a glass of Dom Perignon in hand, cossetted by the hides of a small herd and the smell of smouldering tobacco.

Gulbenkian drew the short straw when his father died, inheriting just $2.5m of the $420m family fortune following a bitter court battle over the younger charging a plate of chicken in tarragon jelly to petty cash while working for his father, despite drawing no salary. Before his own death in 1972, the collector broke with miserly family tradition and gifted the unique 600 to his loyal gardener, who shipped the car home to Portugal. It remained there, locked away, for 30 years. Despite spending so long in isolation, the Mercedes shimmers with the memory of moonlit drives along the French Riviera.

Among even the most glamorous luxury conveyances, the Mercedes-Benz 600 stands as a true colossus. In terms of technological advancement, engineering prowess and sheer opulence, the W100 led its class for nearly 20 years and became one of the firm’s most long-lived models. This particularly special example, a rarity among rarities, reflects perfectly the extravagance and boundless ambition of its first owner, whose lust for life and insatiable appetite for its finest distractions would have given the Greek gods a run for their money. In their lifetimes, both man and machine remained without equal.

Thanks to RM Sotheby’s (www.rmsothebys.com)

Clockwise from left: despite its heft, the 600’s performance figures are impressive; huge 6.3-litre M100 V8 first appeared in the 600; wood dash is covered in leather, another unique feature of Gulbenkian’s Chapron.