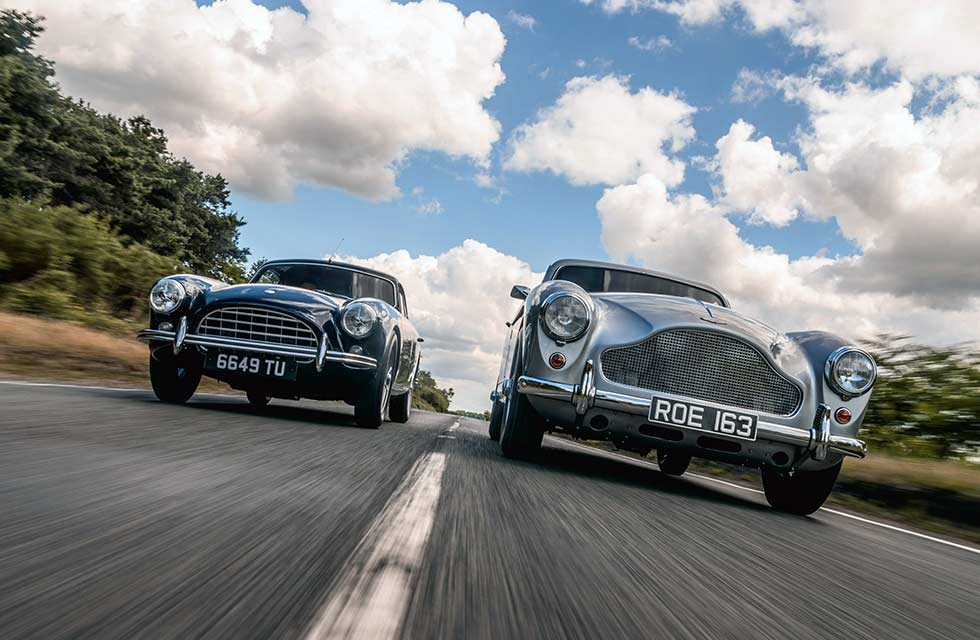 Life imitates art – the AC Aceca and Aston Martin DB MkIII are bound not only by their hatchbacks, but by the creator of 007 himself. Words Greg Macleman. Photography Olgun Kordal.

From the moment an Aston Martin DB5 first flashed across cinema screens in 1964, both car and maker became indelibly associated with the James Bond franchise. But while the DB5 was the vehicle that bound the two in popular culture, Bond’s enduring relationship with Newport Pagnell stretched back rather further, to a time when 007 existed only on the pages of Ian Fleming’s novels.

The earliest James Bond story, Casino Royale, was published in 1953, and in it Fleming’s lead man reflected the life of its creator: from his schooling at Eton and a decorated career as a Naval Intelligence officer to a deep love of all things automotive. That enthusiasm first manifested itself with a 1930 Bentley 4½ Litre ‘Blower’, but it wasn’t until 1959’s Goldfinger that Bond’s choice of transport made the transition from scene furniture to fully fledged character. When the film was released, its automotive star was to become an icon; but for the five years between the novel and the picture, however, the father of all Bond cars could have been very different.

Fleming presented the world of James Bond as a more polished and exciting version of his own, including exploits in the wartime casinos of Estoril and his love of golf; the sands of his own life became pearls with each keystroke. In Goldfinger, Fleming immortalised local Royal St George’s Golf Club pro Alfred Whiting as caddy Alfred Blacking at ‘Royal St Marks’, scene of Bond’s showdown with Auric Goldfinger; the arch villain borrowed his name from Ernö Goldfinger, a Modernist architect whose work Fleming despised and who sued the writer before settling out of court. And while Bond was issued a ‘battleship grey Aston Martin DB III’ in the book, just a few years later its author would take delivery of perhaps its closest rival: this very AC Aceca.

‘With the roofline raised and rear crossbracing removed, the transition from DB2 to DB MkIII was a product of evolution rather than revolution’

Though the Aceca beat the DB MkIII to showrooms by a year, the Aston’s lineage goes back to the Frank Freeley-penned DB2 of 1950 and the early David Brown era. The DB2 had been transformed by the time Fleming started Goldfinger: first to the more practical four-seat, Vantage-powered DB2/4 in ’1953; then a MkII redesign that in ’1955 brought vestigial fins, new tail-lights and a more attractive front wheelarch swage line; and finally, in ’1957, to the MkIII spec that would play a starring role in his novel.

The transition from DB2 to DB2/4 offered the greatest changes, with the roofline raised and rear cross-bracing removed to accommodate two extra passengers, while a redesign of the rear window gave access to the luggage compartment. It was retained for the final iteration, the MkIII’s body being a product of evolution rather than revolution and most notable for its grille. Heavily altered in the image of the DB3S racer, it has influenced every Aston since.

Beneath the aluminium body lay a sturdy chassis and a much-revised version of the WO Bentley-designed DB2/4 ‘six’, reworked by Tadek Marek with a new block, crank, intake and exhaust manifolds. Power was up from 140bhp to 162 (or 178bhp with twin exhausts, as here), while Girling front disc brakes were later standardised. The cabin featured an all-new fascia, which laid the instruments in front of the driver for the first time.

The Aceca traces its design to the open-topped Ace of 1953 – itself inspired by Ferrari’s 166 Barchetta. Built on a lightweight tubular chassis with aluminium body panels and wood-framed doors, like the Aston the Aceca featured a hatchbackstyle rear. The most notable changes through its nine-year production life revolved around its powerplant. Early Acecas left Thames Ditton with AC’s aged 2-litre ohc straight-six, but from ’56 cars could be specified with Bristol’s more powerful 120bhp ‘six’. When that eventually became unavailable, in ’61 it was replaced by the Ford 2.6-litre from the Zephyr, breathed on by Ruddspeed and available in five states of tune. Entry-level cars featured a lightly reworked iron head, while as much as 170bhp was coaxed from the humble unit in top trim thanks to a trick Raymond Mays alloy head mated to triple Weber carbs. Meanwhile, the Ace had attracted the attention of Carroll Shelby, and the looming shadow of the forthcoming Cobra meant that just eight Ruddspeed Acecas were built; Fleming took delivery of chassis RS5506 in August 1967.

Despite their similarities, there’s no escaping the fact that the Aston is the bigger machine, its higher bonnet and roofline contributing to a comparatively agricultural look. Both share a striking resemblance in profile, with a similar rear window treatment flowing into groundbreaking hatchback tails, but it’s the delicate AC that appears the better resolved thanks to its finer, slightly upturned wings and the perfect proportions of its smaller side windows.

At a glance, the Aston and AC are like a Hollywood actress alongside her stunt double, but their true characters come to the fore once the cameras are rolling. Show the DB MkIII a twisting country lane and it defaults to pootleto- the-pub mode, muscle memory from a lifetime of easy living settling the speedo at a comfortable 45mph. It bumbles along on a swell of torque, cruising gently with just the merest tickle of the accelerator. Even at these speeds there’s a characteristic steering dead spot in which the wheels seem to chart their own course; it demands constant input, and you saw softly at the wheel like an actor in a back-projection car chase. When the 2.9-litre ‘six’ requires you to swap cogs, the action is effortless and the delicate lever contrasts with the scale of the car.

Ask more of the DB and it responds willingly, the sonorous Lagonda-derived engine urging the big coupé onward. Straight-line speed is respectable, with 60mph coming up in a little more than 9 secs from standstill and terminal velocity reached at a whisker under 120mph, but as the pace increases the characterful foibles that enchanted at lower speeds become challenges. The steering feels slightly wayward, which, combined with the Aston’s 1270kg weight (some 250kg greater than the AC), makes cornering quickly something of an act of faith. The DB can be hustled, but doing so focuses the mind more than you might expect – particularly on narrow lanes with unpredictable camber.

Unlike the Aston’s antiquated – albeit coil-sprung – live rear axle, the Aceca boasts all-independent suspension with its transverse leaf springs in effect creating a double-wishbone set-up all round. Show the AC the same stretch of asphalt and it will strain at the leash, each press of the accelerator met with a roar from its triple SU carbs and a glorious straight-six howl that sets the hairs on your neck on end. It’s quicker and more free-revving than the DB, while the four-speed Jaguar-derived Moss ’box is a delight (Ford’s would have been unable to cope with the extra power Ken Rudd teased from the Zephyr motor). Where the Aston’s change is genteel the AC’s is muscular, with a positive action that ‘thacks’ with the satisfaction of snapping closed a Zippo. Paired with a heavy clutch, full-blooded launches are irresistible – so too is reining in your right foot as the needle climbs the dial to the soundtrack of that magnificent engine.

The Aceca’s bite matches its bark, proving hugely accomplished at tackling winding roads. It might not be as agile or fleet of foot as an Ace, but the difference is negligible compared to the gulf that separates it from the DB. The Aceca is lighter, stiffer and more direct, and every inch the driver’s car – particularly in Ruddspeed trim. Typical of all Acecas, the suspension is firm, and while the ride can suffer over broken surfaces it comes into its own when pressing on. The longer you spend in the AC, the greater the gusto with which you hurl it into corners, each time proving equal to the task. It has stacks of grip and all the poise of a racer, its direct and accurate steering inspiring confidence to press harder. As we pull into the car park, hot engines ticking as they cool, it’s difficult to imagine not reaching for the AC’s keys given the choice, such is the thrill and theatre of driving it quickly.

For a public whose recent memory was still swimming with wartime rationing and biting austerity, James Bond provided a welcome flight of fancy – a ticket to a world of luxury and excess that they could only imagine; the swashbuckling spy known for a love of shaken Martinis and sharp suits was destined to take the wheel of the glamorous Aston Martin. Away from the world of secret agents, high rollers and international intrigue, however, Fleming found himself drawn to this understated and supremely capable Aceca – and it’s easy to understand why.

Both cars feature sidehinged hatchbacks – the AC’s larger rear window and Aston’s higher roof the main distinguishers, plus the DB’s ‘cathedral’ lights. Similarities continued to the interior. Below: this Aceca’s Stage 2 ‘six’. has 167bhp. Above: AC offers the more engaging drive. DB2/4 featured an all-new dash. Below: WO Bentley-designed ‘six’ was heavily revised by Tadek Marek. Above: familiar profile.

Thanks to Redline Engineering (www.redlineclassiccars.co.uk)