This all started when my wife and I decided to update our cars. She got a new toy, but I decided I wanted something with a bit of age to it.

ONCE A DAILY DRIVER, THIS FAITHFUL HR

My criteria were that I did not want a new car and it had to have been built before 1970. Choices were narrowed down to Valiants AP5 or 6, Ford Zephyr MkII, Studebaker Lark and any Holden from 1956 to 1967. The search for vehicles was not providing anything that grabbed me.

So I went to a Flemington Racecourse car show and came across Dave from HR Parts & Stuff. He had a survivor HR on display that had been cleaned up and this rekindled a long relationship with the model, having owned a panel van from 1969 to 1975. We got talking, and I told Dave I was interested in a HR Premier, but it had to be Pyrenees Blue.

He took my number and said he would get back to me as he knew where there was a one-owner car he had been chasing for a couple of years. I was surprised when I got a call from Dave back in October 2007. The old guy he had been trying to get the HR from had actually sold it to a brake repair business in Ringwood. Dave visited them and they said they were thinking of putting a V6 Holden motor in it and were not interested in selling.

After 12 months Dave got a call from the shop and was asked if he still wanted the HR as they had lost interest in the project. We checked the car out at Dave’s and found it to have very little rust in the normal spots. The floor pan inside was like brand new. Other than a dent the full width of the front passenger door and a couple of minor dings, the car was in pretty good condition. It was a three-speed manual, Pyrenees Blue and with a not very common bone interior.

The motor had been changed at some stage and it had what we think were 112,000 original miles on the clock. We got the car it at a very reasonable price ($6000) complete with original plates. It easily passed a roadworthy. The HR was a joy to drive and always put a smile on my face when I hopped in it. It was my daily driver for the next seven years, doing the 30km run to work and back with very few problems. It had a tow bar fitted so it was used to haul my ’35 Indian Chief to various rallies with the Iron Indian Riders. 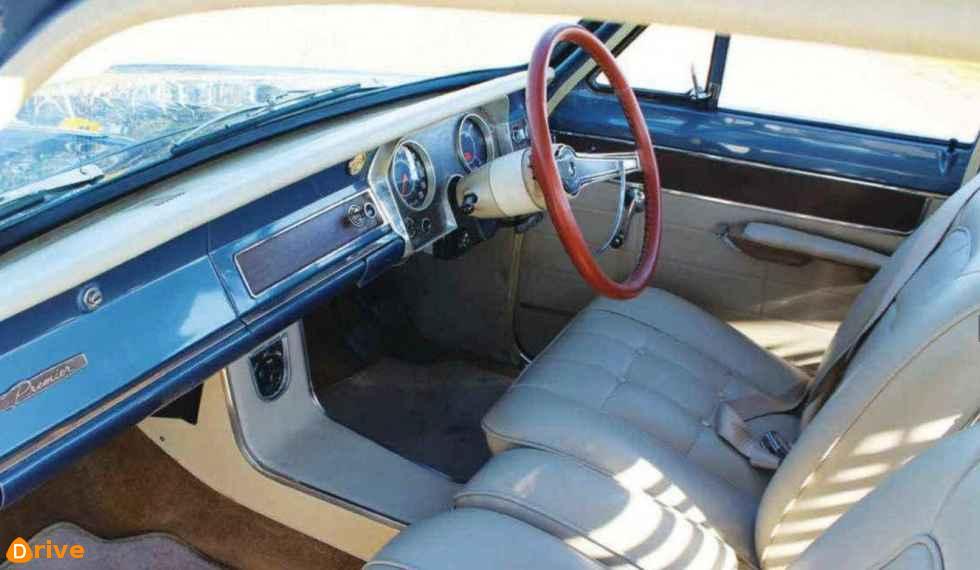 The interior got retrimmed and tidied up – good result..

Quite often it would be used as the backup vehicle on club rallies with my son-in-law driving. It went on rallies to Corryong, Inverloch and the club’s Gypsy Tour from Melbourne to Adelaide and numerous other runs. Just after buying the car I met a group of HR drivers out on a run to the All Holden Day at Geelong. They invited both my wife, Pat, and me to join their group. The club is known as the HD-HR Cruise Club. It’s a real nice group of people and we have been on most of their monthly runs since joining.

After five years with the club I became Vice President and recently my wife has taken over as President. Pat enjoys the runs in the car as well as catching up with people in the club who have now become good friends. The motor developed a rear main leak and was sent to Pat’s nephew who was the service manager for Ballarat Holden. He put the apprentices on it and they did a first class job fixing the oil seal and other minor things that they found need repair or replacement.

The upholstery was original but after 50 years the stitching was starting to give way and the top of the rear seat was cracking and falling apart. JMB, a local upholsterer, did a magnificent job on replacing it. He did front and back seats, rear parcel shelf, all the door cards and the center strip on the consul and consul arm rest. Price was very reasonable and he spent a lot of time shopping around to get material as close as possible to original. In 2015 I was on my way home from work when the unthinkable happened.

I got caught in a line of traffic and a driver in a VN Commodore ran up my backside. The impact pushed me into the car in front. The car was not drivable as the fan had been pushed into the radiator. David Kimpton at GAL Smash Repairs did a first class job on the car. After having the insurance company agree to what they would repair, Dave and I went over the rest of the car and put a plan together of what needed to be done to bring it back to a completely rust-free car, with all minor dents repaired and a new coat of paint.

Towing his 1935 Indian and a Triumph.

The rear end needed the left hand section of the beaver panel replaced as well as the bumper bar repaired and chromed. The front needed repairs to the grille, bumper bar front panel supporting the headlights as well as the bonnet straightened. Next Dave went through all the known HR rust spots and decided to: Reskin all the doors; Weld replacement sections into the corners of both guards; Make and weld in place a new bottom lip for both the bonnet and the boot lid; Remove rear window and cut out rust at bottom of window frame; Remove some rust spots from behind the stainless steel sill trims.

Dave’s work was consistent with an old school tradesman and he was insistent in doing it correctly and making sure every panel was straight and all gaps were correct. While the car was being repaired I retired from work and decided to put the car on club plates. After spending the first few weeks of my retirement helping put the car back together it was ready for a roadworthy in Dec 2017.

The finished car caught everyone’s attention because it was so straight and the paint work was a mirror finish. Like me, the car is semi-retired. Gone are the days when it risked the dangers of peak-hour or the weekend Bunnings car park. These days it’s a cruiser reserved for the occasional club run.