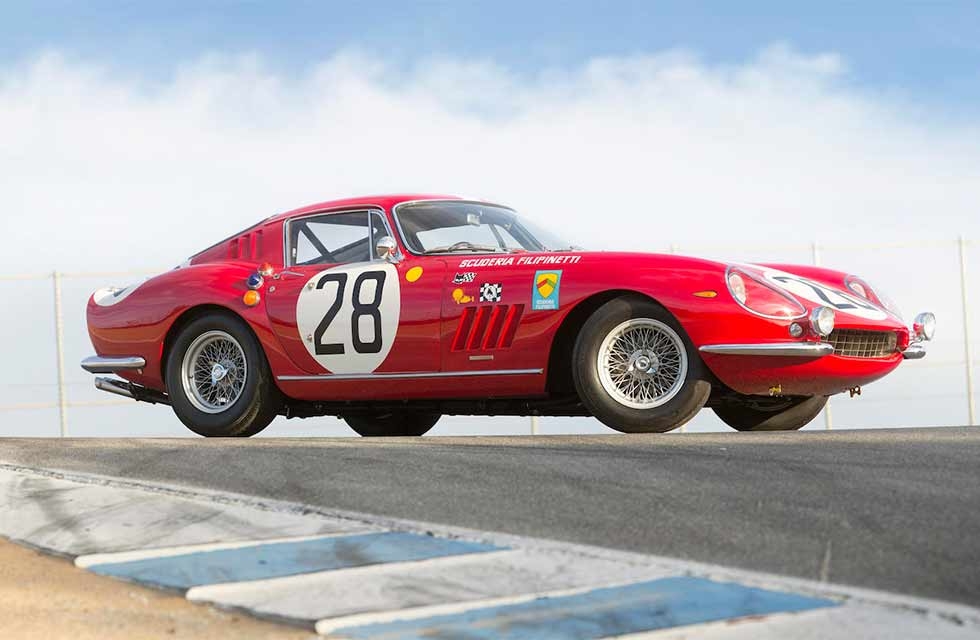 Top of the Class A celebrated Ferrari with class wins at Le Mans, Spa and Monza is ready to race again. Story by Richard Heseltine. Photography by Bonhams/Pawel Litwinski.

It is often said that Enzo Ferrari viewed road cars as a means to an end, a method of bankrolling his precious Scuderia. That may have been the case, but street-legal GT racers accrued more than a few major prizes trackside, the car pictured here being a case in point. However, this glorious machine – a Le Mans class winner no less – is that rarest of things: an underrated Ferrari.

In the general pecking order of Ferrari racing cars, the 275 GTB/C was a low totem fixture when compared with its 250-series GT predecessors, but that isn’t necessarily the case today. Substitute the race track with the auction room, and the ‘Competizione’ is up there with the best of ’em. This example will be going under the hammer at Bonhams’ Scottsdale, Arizona sale in January and, while no estimate has been released as yet, the firm expects it to reach eight figures.

Scroll back to the early ’60s and Ferrari the marque had made the leap from penny number coachbuilt offerings to volume road car production, all things being relative, but with varying degrees of success. Unveiled in late ’1964, the importance of the 275 Gran Turismo Berlinetta in Ferrari lore cannot be overestimated. This was the last two-seater GT car built by Maranello’s finest as an independent player and without any Fiat influence. It is one of the brand’s true exemplars, blessed with the sort of jaw-slackening outline that only Pininfarina in its pomp could muster (or rather the Turin firm’s unheralded stylist, Francesco Salamone). This wasn’t mere smoke and mirrors either: all four wheels were independently suspended (a first for Ferrari road cars), while the single-cam-per-bank V12 was sited far back for a 50:50 split with a five-speed transaxle – a feature that first appeared on competition Ferraris a decade earlier – further aiding weight distribution.

The original 3.3-litre 275 GTB was a polished performer, too, just as long as you remained below 130mph (otherwise the front-end became a mite floaty) and could somehow block out the excessive propshaft resonance. From the spring of ’1966, there was an unofficial second series edition, Pininfarina elongating the nose in an effort to keep it planted, the addition of a torque tube ensuring that the engine and transaxle stayed rigidly in-line. However, with several challengers muscling into its territory, not least Lamborghini from over the hill in Sant’Agata, there were constant updates over the 275 GTB’s four year existence in a bid to maintain its standing. Six Weber carbs became an option early on and, with the arrival of the quad-cam 275 GTB/4 from October ’1966, it received a substantial makeover with revised gearing and dry-sump lubrication. The factory’s performance figures claimed an optimistic top speed of 160mph and 0-60mph time of 5.5sec.

And just as night follows day, more adventurous customers demanded a competition variant. The Gran Turismo category had long been a happy hunting ground for the marque, even if the firm’s recent attempts at duping the Commission Sportive Internationale (CSI) into believing the 250/275LM was a GT car had come unstuck – this being in essence a 250 P sports-racer with a roof; the same model that won the Le Mans 24 Hours outright in ’1963. The 275 GTB/C, however, was very much a road car-derived competition tool even if no two examples were ever strictly alike.

There had been prior attempts at building a 275 GTB racer, not least the four Competizione Speciale editions laid out for the 1965 season, each being powered by 3.3-litre 250 LM-derived V12s. The first example was fielded by Ecurie Francorchamps and driven to third place overall in that year’s Le Mans 24 Hours by Belgian duo ‘Wild Willie’ Mairesse and ‘Beurlys’ (Jean Blaton), albeit in a race of high attrition. However, this latest strain was something else altogether. While the outline was familiar, the 275 GTB/C was significantly different from the road car beneath the Rizzla-thin aluminium coachwork, a Mauro Forghieri-conceived lightweight tubular steel chassis also contributing towards an alleged 150kg weight saving over the standard car.

And the ‘Competizione’ made an instant impression, the Maranello Concessionaires car driven by Anglo- American pairing Piers Courage and Roy Pike placing eighth overall and winning its class in the 1966 Le Mans 24 Hours. Two places further down the road, and second in the 5-litre GT category, was the Ecurie Francorchamps car of Pierre Noblet and Claude Dubois. This 1-2 result did at least spare a few blushes for the men from Maranello as Ford steamrollered its way to outright victory. Nonetheless, ‘our’ car, chassis 9079, is perhaps the most celebrated of the 12 Competiziones believed built.

Originally fielded by Scuderia Filipinetti, the Ferrari was entered for the ’1967 running of the 24 Hours where the Swiss pairing Dieter Spoerry and Rico Steinemann completed 317 laps to finish in eleventh place overall. They also claimed class honours. Steinemann recalled in Ed Heuvink’s Scuderia Filipinetti: “Since the organisers refused the Porsche 906 of Dieter and myself, the invitation of Georges Filipinetti was very welcomed by us… During scrutineering, the car was lined-up behind one of the new seven-litre Ford Mk IVs.

Mario Andretti, who was scheduled to drive that car, came up to me asking what I was going to do with ‘that museum piece’. Looking at the Ford and then at the Ferrari with real spoke wheels, he had a point… It was my birthday that weekend. I really wanted to do well. In practice we managed a 4m 10s lap; not amazing but starting 24th was OK. It was a good, comfortable car to drive; not fast – it would do 250km/h max – but as a Gran Turismo car it was well equipped. It only missed the radio.”

Steinemann went on to recall: “After the race, Filipinetti offered us the car for 25,000 Swiss Francs. But the engine was a little used, so Dieter and I decided not to do it…” Unbowed, Filipinetti soon found a buyer in fellow Swiss Jacques Rey although the car remained in the team’s colours.

The car’s next appearance was the April ’68 Le Mans test weekend, with Frenchman Sylvain Garant posting the eleventh fastest time. However, student protests and union unrest across France prompted the Automobile Club de l’Ouest to postpone the 24 Hours for the first time ever. The race would now take place in September, with Scuderia Filipinetti fielding the 275 GTB/C alongside a 250 LM and a brace of big-block Chevrolet Corvettes. With Garant being requisitioned to drive one of the American muscle cars, Rey was teamed with Le Mans rookie Claude Haldi. Having qualified in 38th place, the 275 GTB/C made the 3pm kick off (an hour earlier than the traditional June start time) but retired eight hours in with Rey at the wheel. It would prove a miserable weekend for the team, with all four entries dropping out by Sunday morning.

Nonetheless, while in no way the class of the GT field, ‘9079’ continued to rack up the miles, with Rey being joined by experienced Swiss Edgar Berney for an assault on the May ’1969 Spa 1000km. They would finish 14th overall and first in class, thirteen laps down on the victorious Porsche 910 of Jo Siffert and Brian Redman. And then came another Le Mans bid, with Haldi being reunited with Rey for what would prove a troubled outing. The Ferrari developed an oil leak early on, which prompted a visit to the pits for an unscheduled top-up. The game was up by Saturday evening when the car was disqualified. The old stager then bowed out of contemporary racing in the best way possible with another class win in September’s 500km of Imola, admittedly against limited opposition.

Rey sold the car that same year for $6000, the Ferrari heading Stateside where new owner Phil Henney had hoped to run it in the 1970 Daytona 24 Hours only for a holed piston to end his bid before qualifying. It subsequently passed through several hands only to be damaged in a garage fire in 1985. More recently, the Competizione was comprehensively restored and reconfigured by Fossil Motorsport of California before placing second in the competition Ferrari class at Pebble Beach in 2006. Returning to Europe shortly thereafter, it has been campaigned extensively in historics, claiming the outright Italian Historic Car Cup prize in 2010 for starters.

And it is truly, really, fabulous to behold. The 275 GTB/C – any 275 GTB – is a sensational-looking car, the addition of stripes, race roundels and decals only heightening the sense of drama. That long, priapic snout, gracefully swollen haunches and fat Borrani wire wheels conspire to produce arguably the last genuinely beautiful GT racer (the 365 GTB/4 ‘Daytona’ Competizione is brutally fabulous, but beautiful?). From inside, it appears very much a road car, right down to the heavily spring-loaded ashtray, the small matter of a roll-cage rather giving the game away that this is a track weapon.

It might lack the cachet or the strike rate of the 250 GTO, or the 250 GT SWB Berlinetta for that matter, but consider this: variations on the 275 GTB theme won their class at Le Mans three years in a row. That’s quite a strike rate. It’s just that this wonderful machine emerged from a manufacturer that was nothing if not an overachiever. For that reason alone, it was always going to be a footnote of a presence relative to the gong-garlanded works racers. But, as footnotes go, few are more deserving of name above the title billing.

BELOW: Ferrari Classiche certified, ‘09079’ will go under the hammer at the Bonhams Scottsdale auction on January 15th.