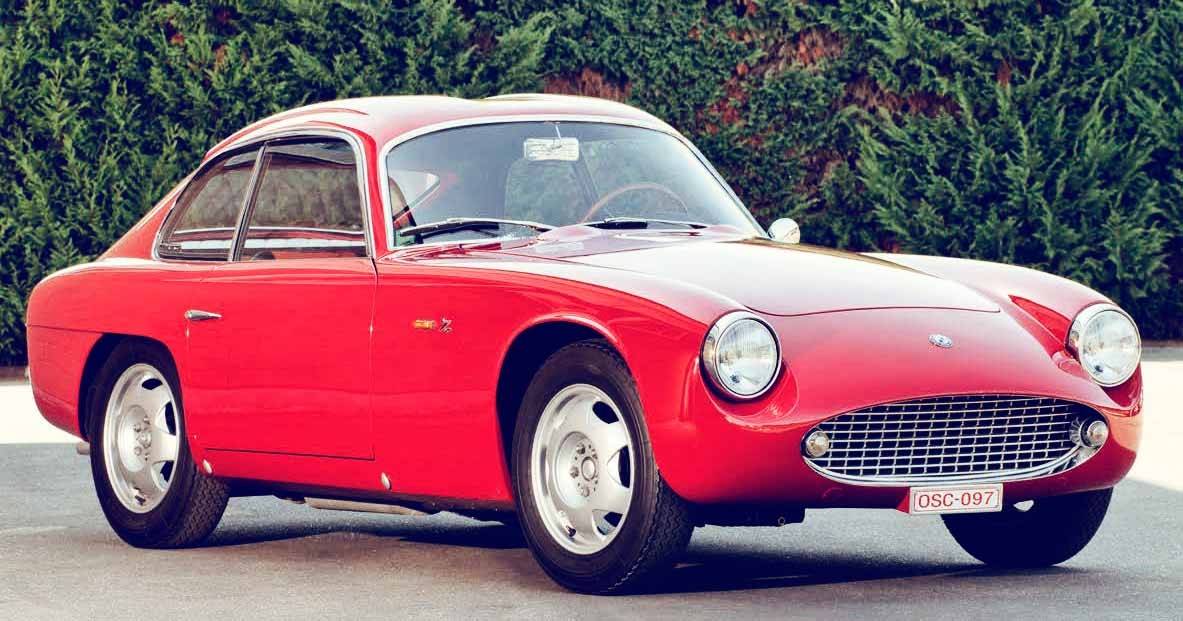 Maserati ‘Junior’ OSCA 1600GT Zagato’s zinger Masterpiece from the Maserati brothers. Having sold the brand that bore their family name, the Maserati brothers continued to build cars with OSCA badging – and the 1600 GT was one of the best. Story: Elvio Deganello. Images: Archivi Deganello, RM Auctions & Auto Italia.

The OSCA 1600 GT represents the final chapter of an extraordinary adventure: the Maserati brothers who were dedicated to the art of building cars (all except Mario, who became a painter). The story begins with the first-born Carlo who worked for Fiat, then Isotta Fraschini, until he finally became the director of Carrozzeria Junior. Carlo Maserati died prematurely in 1910 after introducing the brothers Alfieri, Bindo, Ettore and Ernesto into the world of motoring.

If the story started with Carlo at Fiat, it crossed again with Fiat in 1958. At that time, the Maserati brothers returned to Bologna after selling the ‘Trident’ brand to the Orsi family in Modena. The brothers decided to build their own racing cars under the brand name OSCA (Officine Specializzate Costruzione Automobili) at Via Emilia Levante 144.

In 1958, the twin-cam engined OSCA 1500 was at the height of its sporting success when it became the subject of an agreement with Fiat that a spider version should be built to challenge the success of the Alfa Romeo Giulietta Spider. Following this agreement, the Maserati brothers decided to enter the Gran Turismo market with a sports car equipped with a tubular chassis derived from their racing Sport ‘barchetta’ using an engine evolved from Fiat’s to OSCA’S design. To dress the GT car, the Maserati brothers turned to several coachbuilders: Touring, Boneschi, Fissore and Zagato, which each presented proposals at the Turin Shows in 1960 and 1961. Zagato was chosen to construct coupé bodywork on the majority of the chassis (98 out of 127) following a design by Ercole Spada, who was only 23 years old at the time.

Ercole Spada designed a berlinetta with a long nose, a wide grille, low sides, strong back and short tail. The car may not have had the feline grace of other Zagato creations but it looked aggressive, rather like a reptile with ridges on its back, ready to snap on its prey.

To discover the genesis of OSCA Zagato design, we must go back to the time when Elio Zagato, eldest son of company founder Ugo, was engaged in motor racing, from which he derived much satisfaction and great experience. The father listened to him and Elio’s ideas became the mantra for the company.

Each body at Zagato evolved naturally through competition experience. This house style was all but unique to Zagato’s darting ‘zed’ badge. Few observers, for example, were able to distinguish a Moretti 750 Zagato from a Fiat 750 MM Zagato: they were referred to as ‘Zagatine’, more in appreciation of style rather than the mechanical specification and performance. This was the situation when the Maserati brothers asked Ugo and Elio Zagato to build their GT car. It was clear that an OSCA must look like an OSCA and nothing else. Ercole Spada understood that a racing car was not required, nor a trivial coupe, and nor did he have to draw a ‘Zagatina’. He concentrated on the comfortable and practical, but with a ferocious look like a nervous beast.

The tubular-framed OSCA was to be based on the Sport ‘barchetta’, and for this reason Spada decided to keep the waistline low. Inevitably there was a compromise with the volume of the passenger compartment, which had to be set back to balance the weight distribution and yet be of sufficient size to satisfy Elio Zagato’s requirement for driver comfort. Spada drew a large and well lit compartment and embellished the roof with the signature ‘double bubble’ typical of Zagato. One evolution in this design was the openings at the rear to ventilate the cockpit.

Unfortunately, during the time between presentation (1960) and the start of production (1962), new race regulations made it difficult for the 1600 GT Zagato to have a competitive career. The model debuted in the World Sportscar Championship races on 23 March 1962 at the 12 Hours of Sebring, entered by the North American Racing Team (NART) for the crew H Spencer Lichtie/Robert Publicker. They retired after 33 laps with a blown head gasket.

The second event in the World Sportscar Championship was the 24 Hours of Le Mans in 1962, with two cars entered by OSCA. They had to run in the prototype category because they were equipped with the double ignition that was still awaiting homologation by the FIA. Chassis number 0036 driven by John Bentley/John Gordon stopped after 13 laps due to an engine problem, while the second car (chassis 007), driven by George Arents/Josè Behra retired after 277 laps due to gearbox failure.

After Le Mans, the 1600 GT Zagato’s racing career took place mainly in Italian national events. The best result of 1962 was victory by Gianfranco Stanga in the Fasano-Selva di Fasano hill climb on 26 August 1962.

In 1963 NART entered a 1600 GT Zagato at the 12 Hours of Sebring with Tom Fleming/Harold Baumann, ranking 40th overall and fifth in the GT 1600 Class. In the same race, chassis 007 driven by Robert Publicker/Burrel Besancon retired on the 41st lap due to a differential problem.

In April 1964, Mario Nardari and Ottorino Zarattin raced 1600 GT Zagato chassis 00101 in the Targa Florio and were ranked 27th overall and fifth in class (preceded by three Alfa Romeo Giulia TZs that were now dominating the GT 1600 class). Soon after, Nardari had a class win in the Stallavena- Boscochiesanuova hill climb, then sold 00101 and bought a Lotus Elan. Ottorino Zarattin remained loyal to OSCA, but dropped further and further down the rankings. The best results of 1964 were second places by Fausto Mariani in the Svolte di Popoli hillclimb and of Cesidio De Bernardinis in the Micangeli Trophy.

In 1965 results for the 1600 GT Zagato went further into decline. The only notable result was Mariani’s class victory at the Gallenga Cup hillclimb. Although no longer competitive, the 1600 GT Zagato attracted new drivers because it was a cheap car that could be repaired using parts from the Fiat 1600 S. Among the last drivers of the 1600 GT Zagato were Giampiero Contro (best result: second at Nevegal with chassis 0080), Renato Matteuzzi (ninth in the hillclimb at Raticosa with 0026) and car dealer Gilberto Romano who had bought 0101 from Nardari and closed the sports career of the OSCA 1600 GT Zagato in June 1967 with the fourth class place in the Rieti-Terminillo hillclimb. OSCA Zagatos then became cars for enthusiasts, who saved around 30 examples that currently survive.

The slender structure of the OSCA 1600 GT suggested daring bodywork opportunities for stylists. As well as the Zagato berlinetta, there are also bodies by Fissore, Boneschi and Touring. All were a bit different from each other.

Fissore applied Maina’s design with a low waistline and soft shape to 21 coupés and three cabriolets, the last of which is was later converted into a coupé. Boneschi’s 1600 GTs are perhaps the most extravagant because designer Rodolfo Bonetto disputed what he called “false aerodynamics” and traced straight lines and curves that harmonised in a very unusual way; he decided to use the windscreen of the Alfa Romeo Giulia SS to save costs.

The three 1600 GTs by Boneschi (chassis 0018, 0072 and 00108) are all slightly different from one another. The first is the most angular, the others become gradually softer. Only two 1600 GTs were built by Touring (chassis 0014 and 0019), looking almost identical. They were characterised by their concave rear window, recesses around the bonnet and small rear bumpers. One unusual feature was the removable spare wheel placed in the rear compartment and accessed by an articulated arm.