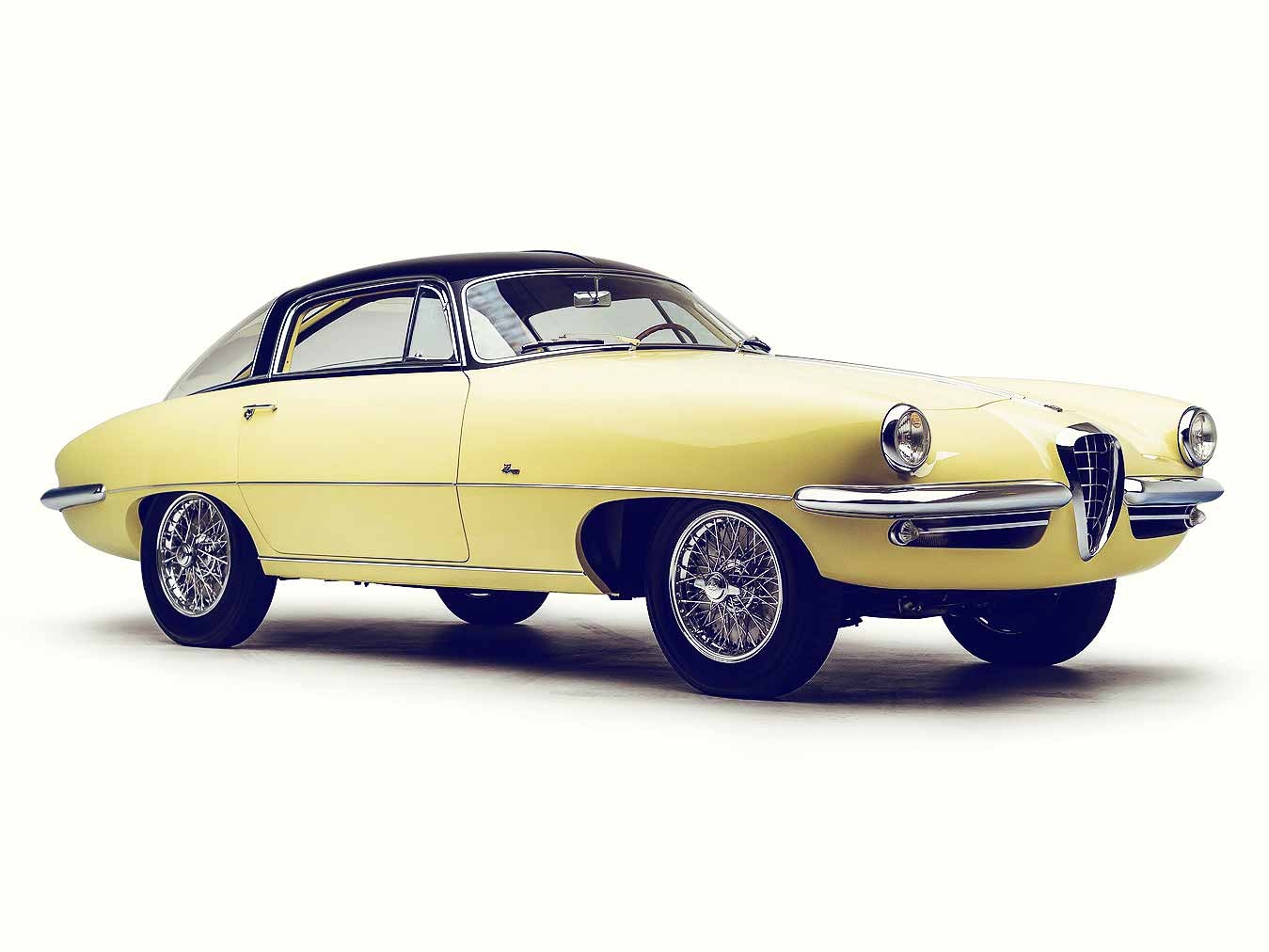 Boano is not a name that ranks alongside Pininfarina or Bertone in the annals of car design, but that’s rather unfair. Boano was, in its day, one of the pre-eminent design houses that might have gone on to truly great glory. Only when its founder, Mario Felice Boano, departed to head up the fledgling Fiat Centro Stile did its story come to an end.

In its wake was left a small quantity of exquisitely upmarket examples of the Italian coachwork art form. Better known for its work on Ferrari chassis, Boano also had a brief, and not entirely smooth, relationship with Alfa Romeo.

Let’s go back to the start. Mario Felice Boano began his coachbuilding career on the shop floor at Stabilimenti Farina. Then in 1930, he departed with ‘Pinin’ Farina when the latter left to start his own workshop. As technical director at Pinin Farina, Boano specialised in building the wooden structures that were used as formers to shape steel bodywork.

A measure of the regard in which Boano was held can be gleaned from this remarkable fact: when Giacinto Ghia died in February 1944, he left half of his celebrated Ghia coachbuilding company to Mario Boano, so greatly did he admire him. Boano headed up Carrozzeria Ghia, where his career was a rich and successful one. He was responsible for such important cars as the Fiat 8V Supersonic and Volkswagen Karmann-Ghia. Boano was technicallyminded, with a great eye for what worked. He was never really a stylist in his own right, instead relying on the input of such pen-men as Giovanni Michelotti, Virgil Exner and Giovanni Savonuzzi.

By 1953, Luigi Segre had effectively ousted Mario Boano from Ghia. As a result, Boano founded his own company, Carrozzeria Boano, in Turin along with his son Mario (who had joined Ghia in 1950 as an apprentice draftsman). Other members of the new team included Mario’s son-in-law, Ezio Ellena, and business partner, Giampaolo Luciano Pollo.

Carrozzeria Boano immediately began rebodying Alfa Romeos. It first tackled a 2000 Sport mounted on a chassis that had been developed by Abarth. Then came a trio of rather soberly styled Alfa Romeo 1900 Super Sprints, two coupes and a convertible. These were built in a flurry of activity at the time, involving several coachbuilders who were all keen to win the contract to do a two-door version of the in-house designed Alfa Romeo 1900 saloon. In fact, it was not Boano but Touring that would eventually be awarded this business. Boano also essayed an Alfa Romeo 1900 SS ‘shooting brake’ body, but not did this make production either. However, Alfa Romeo eventually rewarded Boano with the contract to make the 1900 Primavera two-door model.

Perhaps it is no surprise that, in the wildly experimental days of Italian coachbuilding in the 1950s, Boano should move on to more extravagant projects. One of these is the amazing 1900C SS Speciale that graces these pages, built in 1955. It was constructed on Alfa Romeo’s high-performance 1900C Super Speciale chassis (number AR1900C 01846). The 1900C was Boano’s 1955 Turin Motor Show car – a flamboyant expression that was, perhaps, born of Boano’s disappointment at not being awarded the contract for the Alfa Romeo 1900 coupe.

This car can be viewed as an extension of the ‘Disco Volante’ school of design. There’s no doubt that it has resemblances to Touring’s famous Alfa ‘Flying Saucer’, as well as Franco Scaglione’s aerodynamic BAT Alfas for Bertone.

In 1955, Boano had built an Alfa Romeo 6C 3000 Coupe that presaged this car very closely. The story goes that several Alfa Romeo 6C 3000s had been built with racing bodies by Carrozzeria Colli. One of these, having been severely damaged, was rebodied for the Argentinean president, Juan Perón, by Carrozzeria Boano in 1955. Boano had hoped to display Perón’s extravagant coupe on its stand at the 1955 Turin Motor Show but the president scuppered that plan by insisting that the car be shipped out to South America before the event. (Perón’s car would eventually end up in the UK; after being crashed heavily, its Boano bodywork was scrapped in favour of a replica of the original Colli Berlinetta body).

Without a car to display at the ’1955 Turin Show, some frenetic coachbuilding took place at Boano. The carrozzeria decided to construct a car that, in many ways, took up the baton of Perón’s car. But rather than base it on the exotic 6C, it used the more readily available Alfa Romeo 1900C SS chassis.

The result was quickly created but very striking indeed. Whether you think the car is elegantly curvaceous or rather bulbous is down to personal taste. But there is no doubting that the body’s curves have an elegant simplicity to them. The classic ‘long bonnet, short tail’ proportions are set off by delicate chrome half-bumpers. The front bumpers form the upper part of twin side grilles, flanking a classic eggcrate Alfa grille. At the back end, small round taillights sit elegantly above a curving bumper.

But it’s the amazing arc of the glasshouse that really makes this car special. The split rear window, in particular, is noteworthy, undoubtedly inspired by Bertone’s BAT Alfa of 1953. The raised central highlight motif extends all the way from the front bonnet right the way back to the rear numberplate plinth, bisecting the rear glasshouse. The raked Bpillar design would later appear on Boano’s celebrated bodywork for Ferrari. The whole upper part of the car – roof pillars, roof and window surrounds – were painted black, contrasting with the light yellow paint of the lower body. The Boano Alfa appeared in the March 1956 issue of Quattroruote, where Boano’s “creation of a modern line” was applauded.

Accentuating its sporty pretensions, the car was fitted from new with numerous competition features. A racing-type Tipo 1308 engine was installed with large-diameter valves, a ram-type induction system and twin Weber 50 DCO3 carburettors. Mated to this was a five-speed manual transmission.

This 1900C SS Speciale was strictly a one-off with no production future ever envisaged. Following the 1955 Turin show, the 1900C SS was sold off to a chap called Giuseppe Dalmazio Vallerga of Milan. Several other Italian caretakers followed, culminating in the 1980s with the renowned Bolognese collector, Mario Righini. The car was finally sold on in October 2013 to a new owner and exhibited at Rétromobile in Paris in 2014. The following year, it competed in the Preservation Class at the Pebble Beach Concours d’Elegance because it was such an original and largely unrestored car (aside from an ageing red repaint).

The car’s new owner then had it restored to its original Turin Show livery by Fastcars of Redondo Beach, California. The correct yellow-and-black colour scheme was recreated using a sample of original paint hidden under the decaying red finish. Luckily the original interior has been left intact: black leather piped in cream-yellow with a Nardi wood-rim steering wheel. The original unique instrumentation is still present, as is the Autovox vacuum-tube radio (which still plays, we’re told).

Mechanically, original items include the engine and induction system, tubular header, twin-exit exhaust and Borrani wire wheels. The correct spark plugs, ignition wires and points were sourced and installed during the restoration.

Following the restoration, the Boano Speciale appeared again at the Pebble Beach concours in 2017, this time to win its class. It finally came up for sale in January 2018 at the RM Sotheby’s auction in Arizona, where it sold for a remarkable $1,270,000 – one of just a handful of million-pound post-war Alfas.

As for Carrozzeria Boano, the coachbuilder went on to achieve fame and some fortune with its work on Ferrari chassis. Indeed, in 1956, it took over production of the Ferrari 250 GT from Pinin Farina, eventually constructing 60 or so examples – the largest production run yet for Ferrari. Boano also made custom bodies like the 250 GT Genève convertible and the 410 Superamerica Cabriolet. Surviving Boano Alfa Romeos are very rare indeed.

Eventually, in 1957, Mario Boano was called upon by Fiat’s management to manage its fledgling Centro Stile design department. He would eventually go on to be responsible for such brilliant designs as the Fiat 124 Coupe and Fiat 850 Coupe. As for the former Boano works, that was renamed Carrozzeria Ellena and run by Antonio Ellena. But that, as they say, is another story…

Disco Volante themes are clearly echoed here. Halfbumpers elegantly frame the triple air grilles. Star of the show has to be the swoopingly shaped glass rear windows with their strong centre divide.