Successfully raced when new during International Speed Week in the Bahamas, this E-type then went to Australia in 1965, before returning to the UK in 2005.

As the sides of the huge, staged, packing cases fell away to reveal Jaguar’s E-type for the very first time at a press dinner prior to the 1961 Geneva Motor Show, preparations were already underway to spread a thin number of newly produced cars across the world. North America, Jaguar’s keenest market, received both open and closed versions at its New York Auto show; elsewhere, it was just a trickle. Just two E-types were exported to the Bahamas, in 1961, one in July, the other in September. 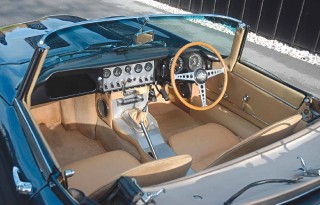 Could there be a more exotic race than International Speed Week in Nassau, Bahamas? Held in December – first at Windsor Field in 1954 and from1957 at the Oakes Field Circuit – it was the brainchild of Captain Sherman ‘Red’ Crise, and ran until 1966. With controversial financial input From the government, its prize money was the highest in sports car racing at the time and attracted top names and manufacturers. Among such luminaries as Moss, Brabham, Hill, Ireland and Stewart, was a local celebrity chef called Hans Schenk.

Schenk was serious about his racing and improved tremendously over the years. His first entry was in 1957, driving a Healey 100, but he moved onto a Healey 3000 for 1959 and 1960. His results were respectable enough, but to have any real chance of winning he needed something quicker. Managing to secure this E-type in 1961, it left Jaguar on 29 September; chassis number 875511 was finished in cream with a light blue interior and, when registered, wore NP975.

Delivered and prepared in time for the Speed Week, NP975 appeared with a factory hard top and a dark nose. Sponsors’ logos showed that Schenk had support from Goodyear and Champion. In the five-lap Island Residents race on 9 December, his first race with the E-type, Schenk achieved his best result ever, coming home second to Tony Adams in his Corvette-powered Healey 3000. There was a repeat performance the following day in the ‘Bahamas Cup’ race. 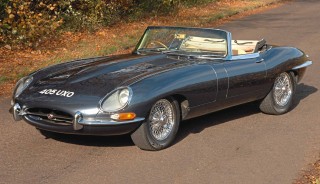 In 1962, there were two Locals’ Races, into which four Jaguars were entered for the first race and two for the second: two E-types, an XK 150 and, curiously, a Jaguar 3.4-litre-powered MGA. Schenk was again denied the top spot, although it was won by an E-type, driven by Peter Bethell.

Edward Treglown brought his XK 150 home in seventh, but the MG Jaguar of Jim Albury did not finish.

Schenk finally got his first win in the second race, and the MG Jaguar came in behind him. Schenk won again in the Bahamas Cup that year, with Albury fifth in the MG Jaguar. Bethell was a non-finisher. Schenk was getting into his stride now and won all three races in 1963 (Albury was third and runner-up twice). Maximising his track time, Schenk also entered the Governor’s Trophy and Nassau Trophy, where he came 31st and 36th, respectively, against formidable racing machinery.

By 1964, Jaguar’s E-type was less competitive, and that convinced Schenk that a competition Shelby Cobra was the way to go. He sold the car to rival Tony Adams, who had initially beaten Schenk driving the awesome Healey Corvette. Adams had competed at Speed Week since 1954, initially driving an MGTC before moving onto a Healey 100, Healey 3000, and then shoehorning the Corvette engine into the Healey. Adams proved to be extremely quick in the E-type, and, given that Schenk had moved onto faster machinery, it is a credit to his skill that he achieved such impressive results. Schenk took the Cobra to a double win in each of the Locals’ Races, while the E-type took a podium finish in the Bahamas Cup. 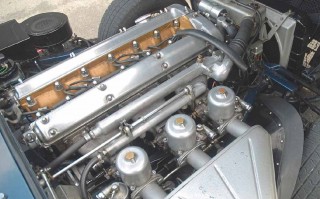 For 1965, Schenk was Porsche 718 RSK mounted and would beat Adams again into second place in the Nassau Cup. The E-type was, by then, looking more racer than road car, sitting lower with the screen removed and a roll bar fitted.

Speed Week continued into 1966, although that was the final year. Government backing came to an end and political pressures, as well as competition from other circuits, signalled its death knell. Quite simply, the big names had stopped going. Through the Fifties and into the Sixties, the relaxed attitude to racing encompassed fun, and who could resist a week or so in the Bahamas while taking in some serious racing? The entry lists had been full of world champions from every sphere of motor sport, from sports cars to F1. It was no second-rate affair and anyone who achieved a decent result in the Bahamas did so on merit. The Schenk/Adams E-type was no exception, especially as it remained relatively standard throughout.

Adams didn’t race in the last event. After competing in 1965, he shipped the E-type off to Europe on a driving tour, before arriving in the UK in 1966. The following year, he moved to Australia, taking the E-type with him. It was inevitable that the E-type would be sold. Although we do not know the actual date, it is known that the next owner, Mr Skevington, set about a comprehensive restoration between 1997 and 1999. 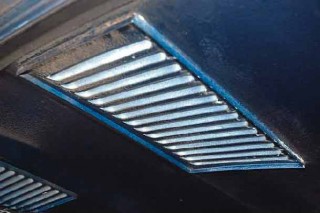 Entrusted to Western Auto Dynamics WA, it kept a detailed history file containing every step of the procedure right down to the test-drives and results. When totalled, the invoices added up to around A $145,000 (£58,000 at the time, or around £100,000 in today’s money).

Trawling through the invoices, it is evident that the bodyshell wasn’t devoid of rust. In December 1997, reference is made to a replacement left-hand bulkhead panel, left-hand floor assembly, lower rear quarters, and sills. Various colours were optioned before settling on Lapis Blue, with tan leather trim. Then, the assembly began with a replacement wiring harness, fitted in October 1998. The engine was rebuilt.

With few exceptions, cars entering Australia are required to be right-hand drive. A conversion is necessary if road use is intended, which was incorporated into the E-type’s rebuild. Other upgrades included a direct swap to Jaguar’s all-synchromesh four-speed gearbox, bigger calipers (although the original Kelsey Hayes bellows booster remained), an alternator and an additional electric cooling fan. Wheels were changed to 6in rims with 205 70 x 15in tyres.

Following final assembly and shakedown, in September 1999 the E-type was handed over to Mr Skevington, who registered the car in Perth with the appropriate number: ‘61 ETYPE’.

Scant reference is made to its use in the history file, although there is a magnificent black-and-white photograph of the owner in riding boots, mounted on a splendid horse. A keen enthusiast next secured the purchase of 875511, in July 2003. Professor Nimal Jayaratne, who had left his native Sri Lanka to take up a position in the UK, moved to Perth, Australia, for a headship at the University of Technology in 1999. He was happy using the E-type in the Australian climate, where it proved very reliable, so when he returned to the UK in March 2005 after being offered the headship at the Manchester Metropolitan University, he took the E-type with him. Anglo Pacific recorded an arrival date of 31 May 2005. When the Jaguar was registered in the UK it was given the number 405 UXO, and its first UK MOT test recorded 20,909 miles. Mick Duffy, of the Jaguar Drivers’ Club E-type Register, inspected the E-type four years later, in June 2009, and the speedometer showed just 36,600 miles.

Nimal kept up the service routine, the invoices now charting its life in the UK. The bills show the usual items, like new Greenstuff pads and driveshaft universal joints, but in 2011 there was a cylinder head overhaul, which might account for the 3.8 Mk X unit currently fitted. However, the original and correct matching-number ’head remains with the car. Later, the brake master cylinder was replaced. Nimal clearly enjoyed the car – in his hands, the mileage increased to 62,170. 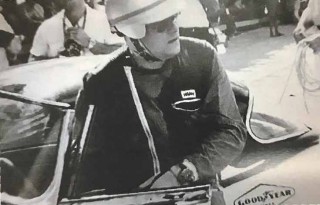 It was in 2017 that Duncan Hamilton ROFGO, which specialises in some truly epic historic cars, discovered what, at first glance, appeared to be just another E-type, admittedly, a very nice example. But then, its amazing racing history came to the fore. It is now offered for sale, and although in its current state it is a wonderful road car, little would be needed to get it back on the track again.

The sun is shining on the crisp November day that I am at Duncan Hamilton ROFGO, in Micheldever, Hampshire, to drive this ex-race E-type. The company was established by Duncan Hamilton, nine times competitor at Le Mans and winner for Jaguar in 1953, although the business today is run by his son, Adrian.

Aware of the history, I am inclined to look past the colour change and even the swap of the steering wheel from left to right. I try to imagine Hans Schenk and Tony Adams lining up with the other competitors and ready to run across the track for the Le Mans-style start, then howling down the track, taking care not to collide with others of the same intent. The performance and handling today is almost irrelevant (although impressive) given its distinguished past, but, all the same, I revel in the way the engine revs soar, rewarding with a punch in the back that an E-type on song can give. The all-synchromesh gearbox is so easy to use, too – an improvement that the Bahama boys would have relished. 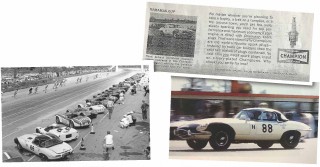 Handling on the 6in rims and 205 tyres is excellent, although unfortunately for me there is not the opportunity to exploit the system on the local roads around Micheldever. The brakes are a surprise, though. It is a given that the larger brake calipers would be efficient, but I expected the Kelsey Hayes booster to let the side down, requiring an extra push to get the brakes working. It isn’t so. The system has an ability to perform way above expectation. I can see the destiny of this car, not as a regular E-type to use on a sporadic basis, but returned to its roots. There is almost a duty to get it back racing again. There are so many options within the various historic racing events now available that it could so easily be a competitive entrant without too much trouble. For example, there is the Kinrara Trophy, at Goodwood, which requires that pre-1963 E-types run with a steel bonnet, full chrome and standard engine. Hard tops are not allowed. This Bahama racer, with its unquestioned history, is the perfect car. Throw in the Tour Auto, Modeno Cento Ore and other perfectly suited events, and this E-type could be very busy indeed.

Now right-hand drive, this historic racing E-type has been restored to roadgoing specification.

Champion was obviously pleased with the publicity from the race-winning E-type, using it in the advertisement.

This colour shot shows how standard the E-type was, with not only bumpers but nose chrome, too.

ABOVE: This 3.8-litre engine had enough power to propel the car to victory in the Bahamas