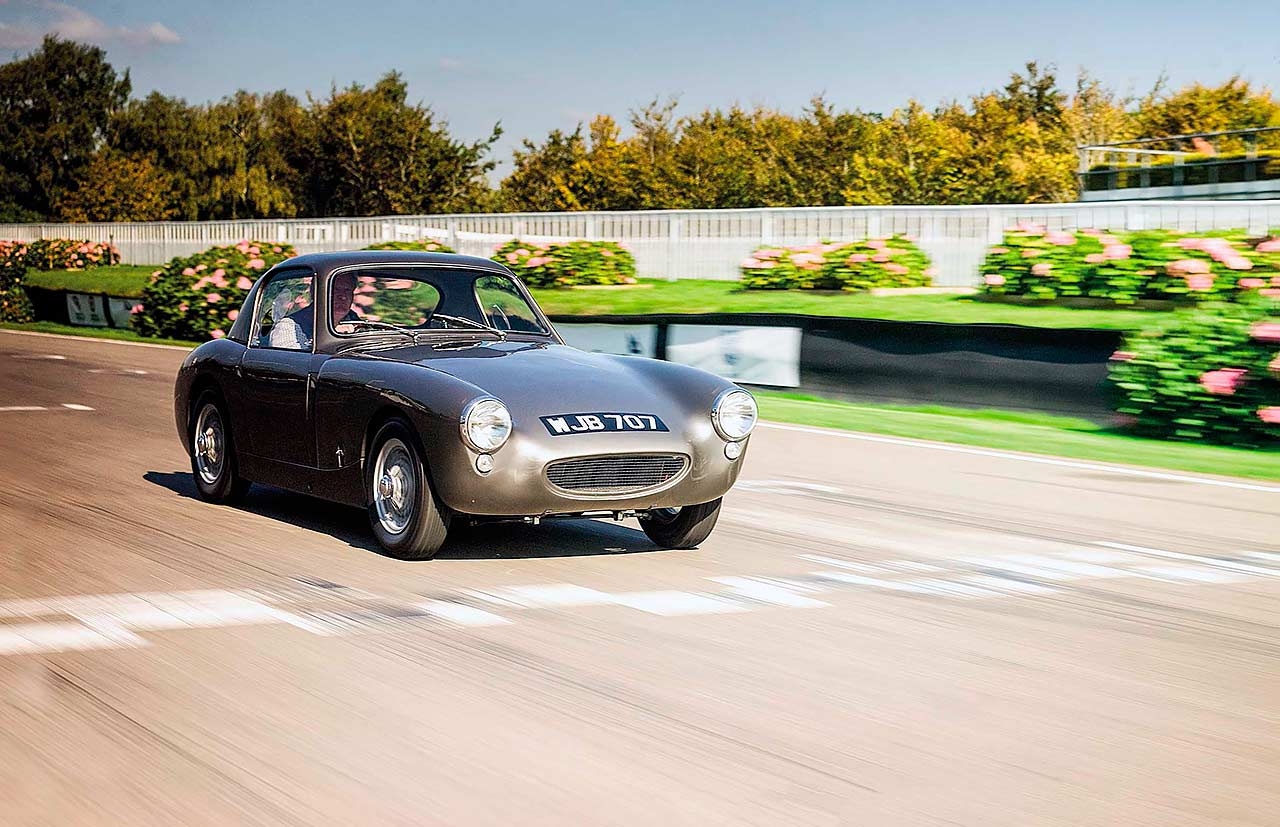 This unassuming little machine is a legend. A giant-killer. A four-wheeled history lesson. And a perfect representation of the life and times of a 1960s race car – though how it survived is as close to a miracle as you’re likely to find in the automotive world. So, a few facts to set the scene: WJB 707 is the most original of the remaining Sebring Sprites (legends, one and all). It’s been driven by Pat Moss and John Sprinzel but mostly by Lotus stalwart Ian Walker. During the 1961 race season it set class records at every circuit where it raced. It was later rallied, Autocrossed and hillclimbed – while being used as a daily runabout during the week. And it’s not long emerged from a [cough] 22-year restoration.

But here it is, back in one piece, with its owner-since- 1966 Stephen Bowen and the guys from CCK Historic, who are looking after it (and offering it for sale, hence this rare sighting). So let’s start at the beginning… WJB 707 emerged into the world in October 1960 as an Austin-Healey ‘Frogeye’ Sprite, modified by the BMC Competitions Department as a rally car with Girling disc brakes, uprated suspension and wire wheels. Pat Moss, sister of Sir Stirling, and Ann Wisdom drove it in the Tour de Corse but failed to finished due to gearbox problems. Not long after, in late 1960, the Sprite was sold to Ian Walker. At the time Walker was already an established and relatively well-funded Lotus racer, and he went on to form the highly successful Ian Walker Racing equipe.

But during the 1961 season his focus was WJB 707, which he’d bought on the understanding that he would convert it to Sebring Sprite specification and race it in a team of three, organised by Sprite legend John Sprinzel. Responsibility for the conversion of each of the three Sprites to Sebring spec would be down to their individual owners.

Walker was ex-RAF, and had spent two-and-a-half years as a Lancaster bomber rear gunner, one of the most vulnerable and dangerous positions of modern airborne warfare. The trivial matter of his own safety wasn’t going to get in the way of producing the most competitive Sprite of the three. So, as stipulated by BMC Comps, he went to Williams & Pritchard for the Sprite’s steel body to be swapped for the sleeker, lighter, alloy Sebring replacement. But he went further, installing alloy inner wings, stressed floor and bulkhead, keeping only a small portion of the original steel bulkhead on which to mount the clutch and brake pedal mechanisms.

At the rear he was even more extreme, removing the boot floor entirely, with just a tubular brace between the rear ’arches to keep them apart. The fuel tank was held in with strips of Dexion. Even the sidescreens were lightened, and the windscreen was made smaller, because alloy is lighter than glass. Vision? Who needs vision!

So Walker’s emerged as the lightest of the Sprites, but that wasn’t enough for him (especially as he was no lightweight himself). With deeper pockets than the other two owners, he commissioned an engine from tuner Don Moore, complete with Harry Weslake cylinder head.

In this form, WJB 707 proved just about unbeatable in its class. Even in its first outing, at BARC’s Oulton Park Spring Meeting, Walker took class honours, and that set the pattern for the rest of the ’1961 season, leaving Walker with 15 wins to his name in WJB 707 by the end of the year. By that point it had competed in the Nürburgring 500km as well as at all the major UK tracks, and had lapped the Silverstone Club circuit a second quicker than the vastly more powerful ex-Le Mans works ’Healey 3000 ‘DD 300’. What a machine!

Walker’s next step was to run his own team for 1962, and the Sprite became surplus to requirements. He sold it to the wife of a Suffolk level-crossing keeper as a surprise for her husband – John Sprinzel recalls that the ‘funny, little and rather scruffy blonde lady’ arrived at the Lancaster Mews showroom in a taxi, ‘baby in her arms, didn’t even want to inspect the car’.

Her husband raced WJB but it caught him out on the first lap of a Brands Hatch test day, and had to be repaired by the nearby garage of Rob Walker, better known as Stirling Moss’s team manager. It was probably at this point that WJB’s alloy Sebring bonnet (one of two made) had to be replaced with glassfibre.

Three further owners followed: Leslie Osborne of Walton-on-Thames, James Warne of Abinger Common, and Alastair ‘Mac’ McHardy of Portsmouth – who has returned to Goodwood to be reunited with the Sprite. ‘It meant nothing to me at the time; we just moved onto another race car. I knew this had a history though – Ann Wisdom and Pat Moss were well-known at the time. I used it as a road car, drove it back from the races. My first was Goodwood, then Oulton Park, then Brands.’

In late 1966 Mac offered WJB for sale, minus engine, with this unconventional advertisement: ‘Last week I offered my genuine Sebring Sprite for only £350. Miss it? It’s the greatest. Phone for details. Three customers, two with horrible exchanges, the other offered £270. It’s robbery. Best offer over this buys bargain of the year.’

Stephen Bowen’s was the best offer, at £285, and he promptly installed a 1098cc rally-spec engine and got on with the serious business of having fun in the Sprite. ‘I was working for Nerus Engineering, a BMC Special Tuning dealer, so we knew everyone. I went to the Comps Department and they said “Ah, you’ve got that old thing from Pat Moss – it will make a good donor car.”

‘I did everything in it. Croft circuit every two weeks during the winter – 350 miles with no heater and snow coming through the floor! – Bodmin hillclimb, Rallycross, Player’s No6 Autocross. At one event John Sprinzel was commentating; he was surprised to see one of his old cars!

‘It still had the open back [ie, no boot floor] – that’s how it was. I was driving it every day so I was used to it. I replaced the floor panel every three months [because Stephen’s heels would wear through the thin alloy]. People thought I was a complete nutcase.’

For three years Stephen campaigned WJB relentlessly, in every discipline. In an effort to attract sponsorship, he decided to paint it lime green with a pink stripe. ‘I started painting it at six in the evening and finished at five in the morning. The next day all the machines in the workshop had a green tinge.

‘In 1969 I’d taken the Sprite apart after I’d been to Germany [working for Weslake]. In 1970 I was back out there with Ford Motorsport and Zakspeed, then I moved to Holland and started a car parts business. I was really busy with that but I took the Sprite to the 1967 RAC Rally, where I was working with the service team. While I was there a guy reversed his Transit van into it. I had it repaired but later took it to [Sprite specialist] Wheeler & Davis, where it sat on a pallet for the next 22 years! We didn’t make much fuss, we were still busy.’

During this time Stephen allowed WJB to be used as a template for the restoration of other Sebrings, as well as the Archer’s Garage Sebring replica kit. But with Stephen distracted by work, little happened until the deadline of the Sprite’s 50th anniversary in 2008 began to loom.

‘In May 2008 the bodyshell was painted inside and out in Gunmetal, a Jaguar colour from 1960,’ explains Stephen. ‘We fitted glass, suspension, lamps and steering and a loose seat so that it could be seen at Goodwood for the Sprite 50th event, though we had to push it round.’

So, progress at last, and slowly the restoration progressed. The disc brake system was overhauled, and new clocks and wiring loom fitted (‘Much neater than the original,’ notes Stephen). A new 998cc FIA-spec engine was built by Entune Garage, with a 649 camshaft and twin SU HS4 carburettors. Weighed with two seats and the heavy glassfibre bonnet, rather than the one seat and alloy bonnet of the original, it comes in at a mere 572kg.

‘This is probably the first time it’s had a completely legal engine,’ laughs Stephen, with a nod to the long-held doubts that Ian Walker’s engine really was the required 1000cc. Certainly Stephen’s own engines didn’t quite comply with the rules while he was competing…

So, what next for WJB 707? ‘I did a friendly rally with it but I can’t drive it anymore,’ says Stephen. For this reason he’s reluctantly offering it for sale through CCK Historic, who have known both Stephen and the car for years. As it is, it’s a wonderful period piece, and there’s an argument to keep it that way. Alternatively, it will make a great Historic racer – but for that a full rollcage will be needed, and CCK recommends a race-spec 1380cc engine for it to be competitive. It’s a conundrum that the new owner will have to juggle with.

‘I did everything in it. Croft circuit every two weeks during the winter – 350 miles with no heater and snow coming through the floor’