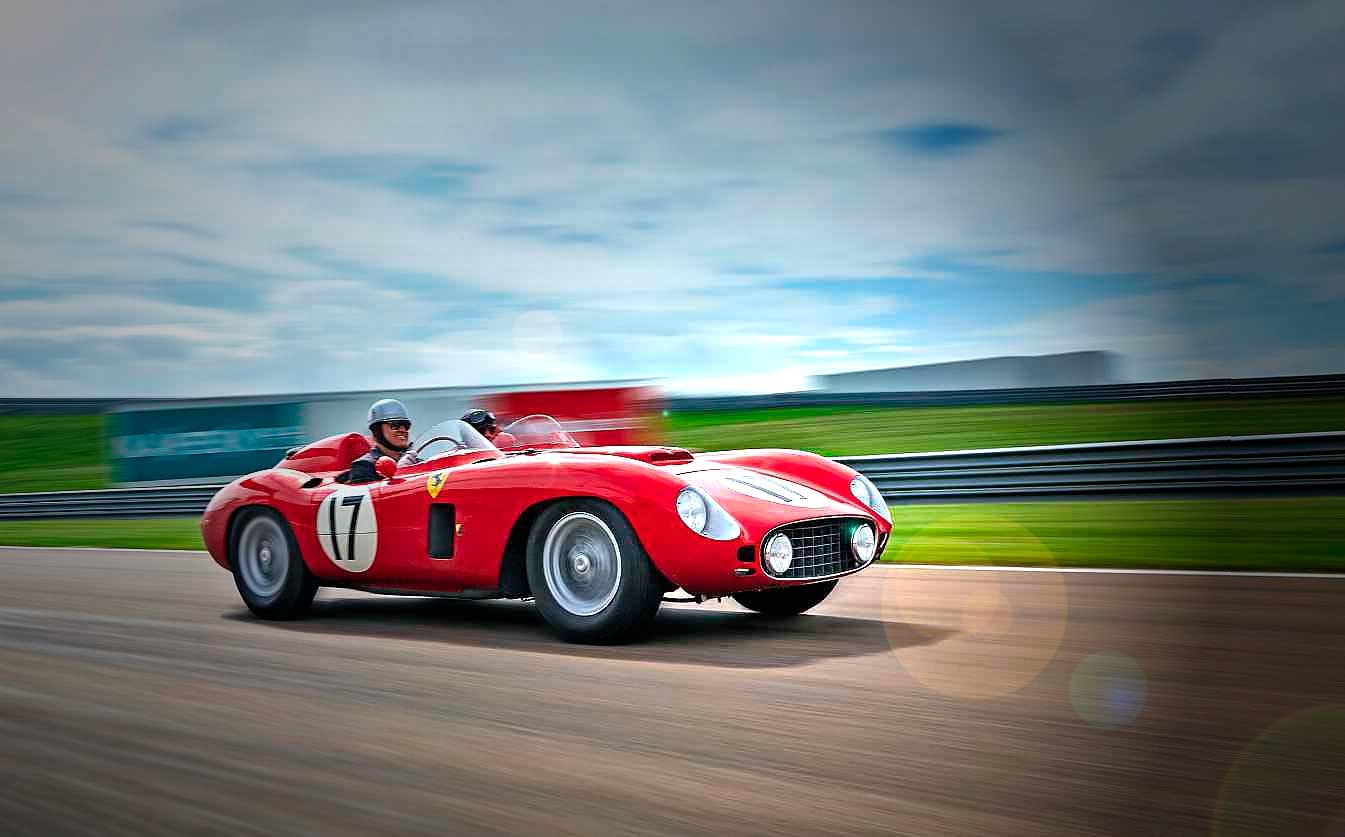 A party on Italian roads Ferrari Cavalcade. Driving an 860 Monza in exclusive company. Join Robert Coucher in a sublime 860 Monza, as Ferrari celebrates its 70th anniversary with the Cavalcade Classiche. Photography Ferrari.

Three days of touring around beautiful Tuscany in the Italian sunshine are promised. And I’d be taking part in a glorious, ultra-rare Ferrari. Where do I sign? We are entered in the Cavalcade Classiche, along with 69 other Ferraris from all over the world, to celebrate Ferrari’s 70th anniversary. I join my friend Damian in his exquisite, freshly restored 860 Monza, one of only two constructed, and it has a fabulous racing pedigree.

The Cavalcade is based at the luxurious Augustus Hotel, which includes the Villa Agnelli, in the picturesque seaside town of Forte dei Marmi, a favourite with Italian gentry. Rosso Corsa of varying hues is the predominant colour, though many of the 70 cars taking part are silver, blue or Giallo Fly. While being checked and issued with rally numbers, they look stunning in the evening light. The assembled Ferraris range from the earliest surviving example, the 125 S, to Sally and Dudley Mason-Styron’s enthusiastically raced and campaigned 166 MM, plus another from the United States, a 212 Inter from Mexico, a 340 MM from Argentina, Andrew Pisker’s 250 GT Tour de France, Brandon and Eileen Wang’s 250 GT SWB California, and a deeply patinated and raced 250 GT SWB Competizione, mixing with numerous 275 GTBs, 330s, Daytonas, Dinos, a 288 GTO and the latest LaFerrari Aperta Settantesimo (literally ‘70th’, one of nine reserved for sale in this anniversary year) in menacing black.

The sunset at the beachside Augustus Lido is beautiful, the aperitivo is chilled, and dinner is delicious – with the promise of the most beautiful roads in Italy to come. But early next morning the weather forecast is not looking good, so Damian and I stow waterproofs where we can within the tight confines of the Monza. With our start time looming he clambers into the driver’s seat, allows the fuel pump to prime, gives the throttle two kicks, and pushes the starter handle on the transmission tunnel.

Mamma mia! The Monza’s engine is no delicate little V12 but a whopping great four-cylinder, and the sound is incredibly loud, angry and hard. Ferrari’s classic nomenclature is to name the cars after the individual cylinder sizes. So a 166 has 166cc for each of 12 cylinders, which equates to 1992cc, and a 250 is 250cc times 12, so 3.0 litres. Sweet, sonorous sewing-machine engines thanks to small bores. ‘Our’ brute has four 860cc cylinders, so almost 3.4 litres to play with. When it’s warming up you can almost hear each pot’s ignition. Being careful not to bruise the prosciutto-thin ally bodywork, I insert myself into the tight co-pilot seat and peer out through Perspex – kindly, Damian has had a passenger’s ’screen fitted specifically for my benefit. It looks suitable, is easily removable and, as it turns out, will be incredibly beneficial.

‘Its engine is a whopping great four-cylinder, and the sound is loud, angry and hard’

We guide the still-warming 860 through the narrow streets to the centre of Forte dei Marmi and the startline. The full-race Ferrari is truculent and does not really enjoy all this hacking about at low speeds. We line up, receive our time card and look at the Tulip map that directs us towards the magnificently ancient walled city of Lucca. Our start time clicks up, a Ferrari flag is waved and we’re off. Damian can’t resist a bit of showboating so he revs the 860, drops the clutch and the crowd erupts.

Then the rain starts. Hang on, that wasn’t in the invitation! We are fine behind our little Perspex windscreens but it’s time for me to don my leather helmet and goggles and Damian to flip on a flat cap – which instantly blows off, so we stop and retrieve it. I’ve done the Mille Miglia enough times to know that, when it rains in northern Italy, it pelts. I’d advised him to bring full motorcycle-type waterproofs including leggings, so we wrestle on the Gore-Tex kit. I’d noticed the experienced Mason-Styrons had waterproofed-up in their Barchetta from the off, so we are not alone. Elegance is forced to make way for practicality.

Even so, as the rain falls ever harder, my reading glasses become opaque, the Perspex ’screen mists up, and the road book starts coming to pieces in my hands. Water begins gushing in though various cooling orifices in the bodywork and we’re soon drenched.

Those in sensible Ferraris, the coupés with roofs and the cabriolets with functioning tops, are unaware of the conditions we seafarers are facing, although Andrew Pisker’s Tour de France is fogging up and the owner of the 288 GTO loses it in the wet conditions and takes the front and rear off. Fortunately, he’s near the factory. In the Monza, the conditions prove challenging for the driver – limited visibility and streaming wet roads unsuited to the non-existent grip of the cold, old-tech 16-inch Dunlop racing tyres. But what fun being able to flick the 860’s very obedient tail out at modest speed.

Only modest speed is not what this 1956 860 Monza, chassis number 0604, is about. This is a pure-bred racewinner with impeccable history. It was prepared as a works car for multiple World Champion and factory driver Juan Manuel Fangio, and in it he won the Sebring 12 Hours that year with Eugenio Castellotti, contributing to Ferrari’s 1956 World Sports Car Championship. Research indicates that this is the only Ferrari sports car in which Fangio won a race, so you can imagine how special it is to be blasting through Italy in this incredibly rare piece of Ferrari lore.

The Monza was then sold by Ferrari to successful American racer John von Neumann, who campaigned it with then-future F1 World Champion Phil Hill, and it came second at Pebble Beach in ’56. Hill said: ‘Fangio was the lead driver on the works team. He could have driven anything he wanted… but he ran almost every race that year in the 860 Monza.’ It was then raced by Richie Ginther at Riverside and Pete Lovely at Laguna Seca before being retired in the 1960s. Ferrari authority Jean Sage then drove it on the Mille Miglia retrospective, at Spa and at a number of Ferrari Challenge meetings.

The 860 uses an evolution of the Tipo 520 chassis with double wishbones and coils at the front and a de Dion axle at the rear. With its tubular spaceframe chassis sparingly clothed in breathtaking Scaglietti ally bodywork, the car weighs just 860kg and whacks out 300bhp.

Complete and with all matching numbers, the Monza is just out of a restoration during which specialist engineer Andy Prill carefully reconditioned the mechanicals, while aircraft aluminium guru Tony Ditheridge meticulously restored the body and found the original panelwork under layers of filler.

The Monza was repainted in the correct shade of Rosso Corsa (which Ferrari changed every year) and returned to Sebring-winning livery, proudly wearing No17 handpainted roundels (inexplicably an unlucky number in Italy, as we find out) and period-correct water-soluble-transfer Cavallino Rampante shields. It is perfect, and so it’s all the more impressive that Damian is prepared to give the Monza a proper stretch on this three-day rally, torrential rain, road grime and grit notwithstanding.

And it is a handful. The racing clutch is sharp, the steering reasonably accurate, but the four-speed gearshift with reverse lock-out is recalcitrant, with no real synchromesh to ease the changes. Yet the brakes are strong and the ride is extremely impressive, making the Ferrari feel secure and planted on rough road surfaces, exhibiting no suspension crash and with superb damping.

Day two includes a beautiful run along the coast north from Forte dei Marmi to the fishing village of Lerici then back south to Pisa, where the cars are corralled under the leaning tower for the lunch stop, which is very special. And the final day includes a drive along the legendary Via Abetone to Modena for lunch at the Enzo Ferrari Museum, followed by laps at Ferrari’s Circuito di Fiorano, finishing at Ferrari SpA in Maranello.

With the sun finally shining and the ‘co-operative’ motorcycle outriders’ knee-length boots gleaming, the event really comes on cam. And so too does the big Monza. Along the magnificent Via Abetone, which Ferrari used as its test track before Fiorano existed, the 860 at last has the opportunity to gun it. With sirens hee-hawing, the gungho Carabinieri clear civilians out of the way and the 860 starts to sing. The hard engine note smoothes noticeably above 4000rpm and then it all comes together.

Revving enthusiastically to the redline at 6500rpm, the 860 morphs into the thoroughbred race-winner we have been waiting for, hunkering down to unleash all 300bhp. The response is immediate and thrilling as the gearbox now works, cleanly snap-changing up into top gear amid an unrelenting rush of acceleration. Bravissimo! I now understand what this magnificent racing car is all about and why it was one of Fangio’s favourites.

And Damian concurs. Having forcibly spanked it all the way down the Via Abetone and around the Fiorano track, on entering the famous red-brick entrance at the factory he says, with a crack in his voice: ‘This is extremely emotional for me. Here I am driving Fangio’s ex-works Monza back home.’

The Cavalcade Classiche has proved to be more than merely a unique celebratory experience. Superb roads in the most scenic part of Italy, indeed, with five-star service all the way, certainly. But more than that, this reassuringly expensive event has provided access to what none of these well-heeled Ferrari aficionados can actually buy. Shutting down Forte dei Marmi, Lucca, Lerici and Pisa and providing the Enzo Ferrari Museum and Fiorano circuit for our enjoyment with Enzo’s son, Piero, in attendance en-route are simply beyond price.

Yet the undoubted highlight has to be the final black-tie gala dinner within the hallowed confines of the normally out-of-bounds Ferrari factory. Amid the gleaming production line, full of partially assembled Ferraris, the entrants enjoy a final flourish in true Ferrari style. And that is priceless.