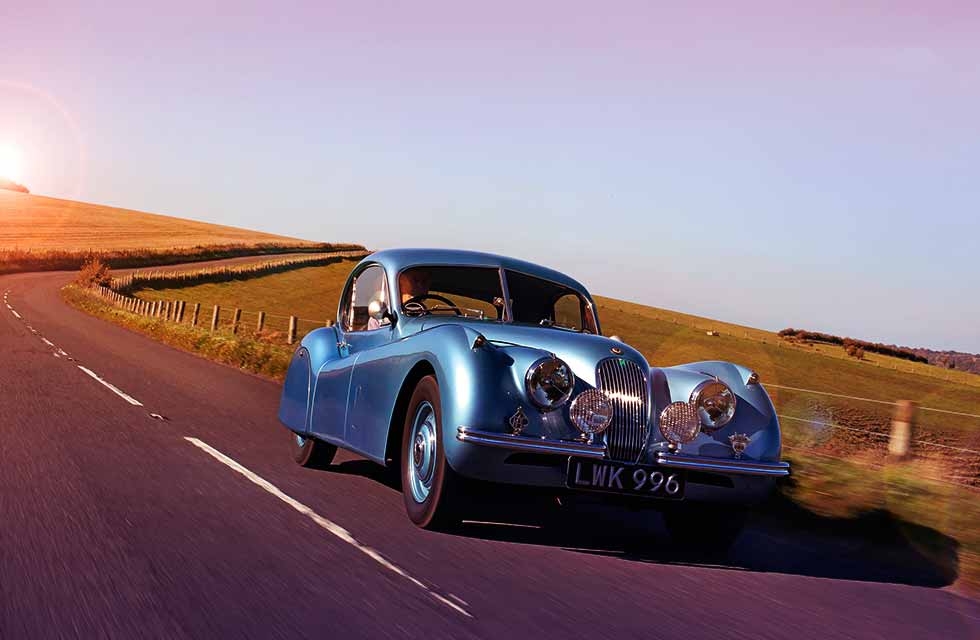 Unsung Hero. The important early Jaguar XK120 that has somehow tracked under the radar. There are many more famous Jaguars, but few more intriguing than the original XK120 fixed-head coupé. Words Greg Macleman. Photography James Mann.

Few cars have made such a striking impression on the world of motorsport, the public consciousness and the future success of their manufacturer as the Jaguar XK120. Formed around the now-legendary XK engine, itself forged in the Swallow Road works beneath the searchlights of the Blitz, the groundbreaking ‘Jaguar Super Sports’ captured both the zeitgeist and the growing obsession with technological advancement.

Just a few years of conflict had brought about the transition from piston-engined planes to jet fighters, the splitting of the atom and the development of radar. Such leaps influenced people’s expectations of their sports cars, which went from being toys for wealthy gentleman drivers in the 1920s and ’30s to serious performance tools. Jaguar capitalised better than most in the postwar years, stealing the show at Earls Court in October 1948 with a sleek and powerful design that blew away the competition in all areas, from its sexy modern looks to record-setting performance – at a price that made it near-irresistible.

“I remember once going on the A3 just to see what speed it could do. It was reading well over 100mph, and approaching 120”

Capable of 120mph, the XK120 rendered its rivals obsolete and the sports cars of the pre-war era – T-series MGs and Austin Ulsters – hopelessly quaint. Competition success drove sales, and within a year it had become the fastest production car in the world, clocking 126mph at Jabbeke in Belgium and taking its first chequer at Silverstone on 30 August. The model’s assault on Le Mans and victory in the inaugural Pebble Beach Road Races, the Tourist Trophy at Dundrod and the Alpine Rally followed a year later. It was an overnight success.

The arrival of the fixed-head coupé in 1951 brought an impressive level of refinement to the range, offering a quieter, more relaxed cabin and more headroom than a roadster with the hood up, plus a smooth shape with improved aerodynamics inspired by the one-off 1938 Jaguar SS100 Coupé. It was more practical, too, thanks to external doorhandles that could be locked and glass wind-up windows with front and rear quarter-lights. Ventilation flaps in the front wings also helped keep cabin temperatures down.

Lauded from the beginning and highly prized in collector circles today, it’s easy to assume that the XK120 always occupied the rarified air reserved for blue-chip classics – but it wasn’t always that way. Rewind the clock to the mid-1960s and the sight of a tatty old Jag smoking up the Kilburn High Road like a cut scene from Withnail and I was not uncommon. So it was for David Roper, a young man on the cusp of leaving school, with £50 in his back pocket and the blessing of his father to go and get his first set of wheels: “He knew I was into cars, but he didn’t expect me to come home with an XK120,” laughs Roper. “I bought it from a guy in Walthamstow who told me it had been owned by a famous racing driver, but it was a wreck. It was driveable, but that was about the most you could say for it: every panel was dented, there were bits missing, and there were no bumpers on it.”

That the battered XK120 won the young enthusiast’s heart was all the more impressive given its competition; Roper also considered a Vincent Black Shadow at £60, and a later XK140 for £10 more. “The 140 with the occasional rear seats spoils the lines a bit – this is a much purer shape,” he says, acknowledging a cheery thumbs up from a passing van driver.

After the car was delivered to his mother’s house in Wimbledon it was immediately pressed into service, as a commuter and for running friends around the city: “I was working in a betting shop and would take off the rotor arm and put a big chain around the bonnet so it didn’t get stolen. I remember once going on the A3 just to see what speed it could do. It was reading well over 100mph, and approaching 120. A friend was hanging on for dear life – he had to cling to the door because it wouldn’t stay closed! It was madness really; you do crazy things at 18.”

Roper’s automotive passion eventually led to a career as a mechanic, and so came a desire to do right by the big cat. Putting his new skills to the test, the young spannerman set about the car’s mechanicals: “It was a bit noisy so I took the head and sump off, replaced the clutch, piston rings, shells and timing chain. That’s when I found out about the racing parts in the engine…” The bodywork, meanwhile, was farmed out – but the standard fell well short of expectations.

The ‘racing’ stamped internal components weren’t the only unusual features of Roper’s XK120. The original engine and gearbox were finished in red paint, unlike most other XK120s, and the cast brake drums had been replaced with lightweight aluminium Alfin units (an improvement, supposedly). The plot thickened when the ratty seats were taken to be retrimmed. “Despite its condition, the car was pretty much original,” explains Roper. “When I had the seats reupholstered, I asked the guy to keep as much as he could. I went back and he said: ‘You know those seats you gave me? They were just old ones out of a roadster!’” Upon closer inspection, each had a cutout to accommodate the hood frame that had been blanked off with a piece of wood.

When the old green logbooks were thrown out in favour of the new V5 in 1974, Roper was required to have the car – then in pieces – authenticated by the DVLA: “Unfortunately I’d lost the buff logbook, and I wanted to put it back on the registration number I’d bought it with, EAN 100.” Perhaps unsurprisingly, given Roper’s youth and the fact that the car now resided in several large boxes of bits, the response from the DVLA wasn’t positive: “I got a letter saying there wasn’t any proof, so I wrote to Jaguar to see if they had any history of it.” To his surprise, Jaguar’s reply was more enthusiastic: the XK120 was not only totally original and known to the firm, it was chassis 679001 – the first left-hand-drive XK120 fhc ever built. If Roper was still standing after that news, the discovery that his car was also owned by Peter Whitehead was enough to bowl him over.

A well-travelled and experienced racer, Whitehead had close associations with the Coventry firm having campaigned an XK120 at Le Mans in 1951, and won the race outright the following year in a C-type. He bought the coupé direct from Jaguar following lengthy deliberation. It isn’t known how long he kept the coupé, or indeed whether he had any hand in its race-derived modifications, but he probably moved it on quite quickly because the car turned up at Coombs garage at some point, most likely in the early 1950s. Period photographs show the car lined up with other significant Jaguars, including the Montlhéry car, LWK 707, and LXD 437 (later to become OLH 3 and campaigned extensively by WW2 flying ace Benjamin Harvey Bowring), before it was sold and disappeared into private ownership.

Following its false-start restoration in the mid-1970s, the car remained off the road for 20 years. It followed Roper from house to house until, in the late 1990s, he was finally able to devote the time and money the project required. He tackled the mechanical work alone, drafting in professionals for the bodywork and a refresh of its striking original shade of Twilight Blue. Care was taken to preserve the unique features that mark out this extraordinary car.

Jaguar built one fhc before Roper’s example, a right-hand-drive car that is thought to have been broken up at the factory, which makes this the earliest. Beyond its chassis plate and the different seats, clues abound to the expert eye that this car was based on the roadster. Small details such as the spacing between the window winders and the door pulls – wider on later coupés – and having only the ignition light below the lighting switch. The first three coupés were built without indicators and were modified later by the factory, with the switch relocated to the left of the map drawer.

Further evidence came to light after Roper picked up a copy of the original workshop manual, which featured a number of photographs of early cars. “In one section there’s a picture of the engine bay with the chassis plate in a different position,” he says. “I looked at it and looked at it before blowing it up and realising that it was my car’s chassis number!” Four holes were discovered where the plate had originally been mounted, and there was a telltale shadow on the plate where the oil line had run – clearly visible in the workshop manual. The car was still in left-hand-drive configuration then. “I’m not sure when it was converted,” says Roper, “but it could have been for Whitehead.” The car also sported chrome sidelight housings, which had been changed to match the rest of the production run by the time it was sold by Jaguar in 1952.

How the car flew under the radar for so long is something of a mystery, considering the attention that was paid to the next example off the production line. At one point no fewer than four cars purported to be 679002 before the genuine article finally emerged in Australia, was restored by JD Classics and shown at Pebble Beach in 2014. Meanwhile, Roper’s arguably more significant car purred along in anonymity.

That suits him just fine. Having been owned for a lifetime and brought back from the very brink of oblivion to close-to-concours standard, the XK120 owes Roper as much in blood, sweat and tears as it does in time and money. As anyone who fell in love with their classic before rising values of historical significance became anything more than a passing afterthought will appreciate, some things are more valuable than the number stamped on a chassis plate or printed on an insurance document.