When Americans began to migrate west from New York and Chicago, the US Government decided to build a roadway named “Main Street of America” spanning 2,448 miles throughout seven western states. On November 11, 1926 the highway was opened and officially named Route 66. It quickly became a heavily traveled passage to California. While more Americans began to move west for better living conditions, Route 66 became a powerful place of economics with motels, stores and gas stations lining the highway. During World War II, Route 66 was vital to the United States Military to transport equipment to the West Coast. Route 66 was also a source for iconic Hollywood movies, music and historic photographs. 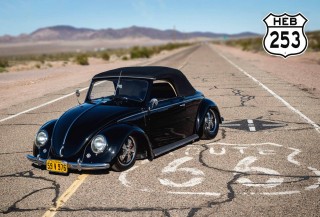 In 1956, President Dwight D. Eisenhower signed the “Interstate Highway Act” to rebuild America’s highways. As Route 66 became outdated and unusable due to bigger and faster automobiles, Interstate 40 was constructed with state of the art pavement, including on/off ramps and signage. Sadly, in the early 1960s, Route 66 began to crumble and it was officially disbanded. Today, the very few remaining stretches of the highway are highly regarded by tourists and occasionally serve as backdrop for car photo shoots as you can see.

From June 1949 to 1953, Hebmüller and Sons, a coachbuilder “Karosserie” firm in Wuppertal, Germany with a proud 60-year history began production of a 2+2 sport cabriolet for Volkswagen, which was designed by Charles Radcliffe and Joseph Hebmüller II. Known as a “Heb” or 14-A (A = Aufbau or Special Body) model, Hebmüller used the standard VW Type 1 chassis, engine, and body panels for the basic design. One month after production began, it was quickly halted due to a fire engulfing the plant on July 23, 1949. The fire severely damaged 35 bodies which were never replaced in the production line. Within 30 days, Hebmüller had rebuilt the production line and commenced production. In total, 696 of 731 documented bodies were built using the rare identification number of 14-00000. The last 14 documented “Hebs” were actually built at Karmann of Osnabruck, Germany after Hebmüller closed due to bankruptcy in mid-1952 with the final two being based on a Zwitter and an early Oval. The incredible history of Heb 14-00253 began on November 25, 1949.

The birth certificate, photographs, and documents that date this car to the early 1970s, when it was living in Connecticut, were provided by Steve Dressler of Hong Kong and owner of Heb 14-00418. In 1988, Gary Lavere of Concord, California purchased 00253 and later sold it to Lloyd Kee. After restoring the car a year later, Lloyd sold the car to Mr. Komori of Flat4 in Japan. The Hebmüller Registry has less than 25 Hebmüllers in the United States and approximately 159 worldwide.

In 2017, Dave “Pip” Pipoly of The Compound Restoration shop in Southern California asked his friend Nao Fujita of Japan to negotiate the sale of 00253 for Tony and Allison of T&A Motorcars Collection in Orange County, California. The penguin-colored Heb needed a transformation, which was tasked to The Compound. Pip, Bob LaCoste and Mike Davis only had a few weeks before the 2017 VW Treffen. The Heb was stripped down and taken to Dee’s Auto Body in Bellflower for painting. The seat covers and door panels were taken to “Manuel the Interior” in Los Angeles, California for black leatherette trim. The Compound didn’t stop there, and they painted all the accessories and seat frames gloss black. Lenny Copp at West Coast Classic Restoration made the custom black carpet to keep the triple-black theme. Pip then acquired a narrowed beam, dropspindles and Wilwood brakes from Old Speed in Paramount, California. The Compound finished the slammed Heb on original (re-configured) 5.5- and (deep) 6-inch Fuchs in the rear.

At the 2017 VW Treffen, fans were astonished over the transformation that took place in just a few weeks. The crew at The Compound Restoration completed months of work in just a few short weeks. Social media glistened over 00253, and at a rate rarely seen in the VW industry.

Tony and Allison weren’t done with the restoration; they had David Nevarez of DNR Restoration in Phelan, California paint the engine bay. Joe Mohr at Mohr Performance of Hesperia, California built the 2332cc (84x94mm) engine topped with original Weber 48IDAs. Pip, Bob and Mike then installed a Rancho Performance Transaxle’s Freeway Flyer transmission, and finished dressing the engine with JayCee Enterprise pulleys, fuel block-off cover, oil filler cap, velocity stacks, T1 billet street linkage and a Joe Hunt magneto. Tiger Vasquez at A-1 Performance in Santa Ana, California provided the exhaust system While at the 2019 Classic Auto Show held at the OC Fair & Event Center in Costa Mesa, California, Heb 253 received rave reviews from Dave Kindig of “Bitchin’ Rides” and Wayne Carini of “Chasing Classic Cars” which can be seen on Motor Trend Channel. Heb 253 was videotaped for a feature on the Motor Trend channel which will air in the fall of 2019.

Double Split pods and glove boxes seen on pre-52 production Volkswagens are the most desirable to a enthusiast. Detailed 3-spoke steering wheel and column painted gloss black. The crew at The Compound used a Joe Hunt magneto and JayCee pulleys, velocity stacks and a custom-fabricated magneto clamp. Looking oh-so good: The unique engine lid only seen on the rare Heb.

Heb 253 draws attention from celebrities such as Wayne Carini of Chasing Classic Cars who signed the Heb.

UPHOLSTERY BY/ Manuel of LA Interior

STEERING WHEEL/ Stock 3-spoke, detailed and painted at The Compound