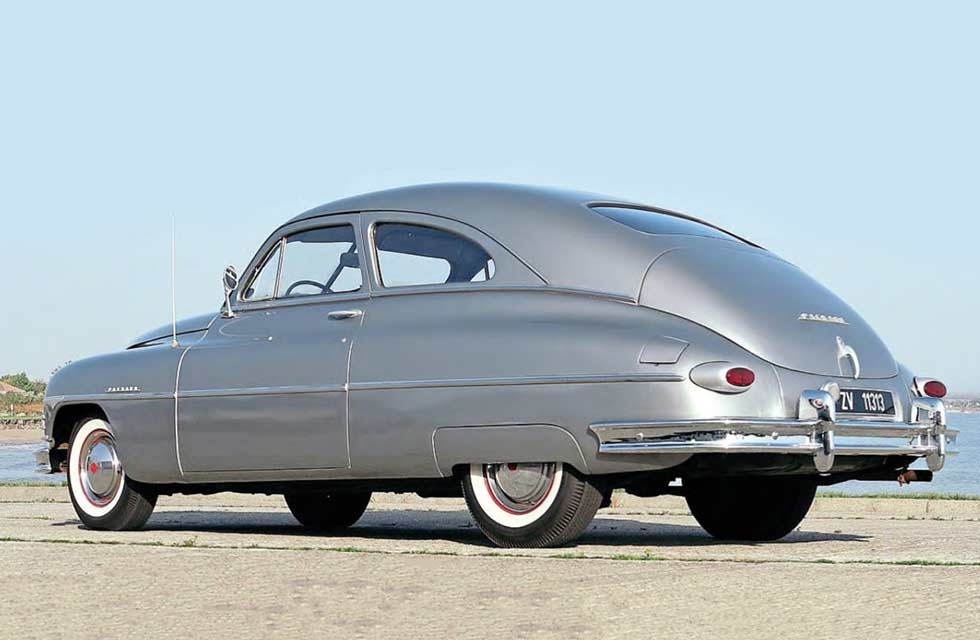 This lucky Irishman has literally gone from one extreme to another with his cars, from an Austin Seven to a Packard 1949 Deluxe Eight Sedan! Words & Photography: Ian Shipley.

Declan Connolly once had an Austin Seven, albeit one that had been converted to a flatbed for tradeshow use, having been used for exhibitions. The little Austin was then stored away, but eventually the time came to decide what to do with it and having trawled eBay, Declan came across an ad for the 1949 Packard Straight Eight Deluxe pictured on these pages. The ad read: ‘Selling because I cannot find suitable garage space’ and ‘Would be interested in part-exchange or swap for something new or Seventies’. The key was at the end of the sentence ‘(smaller obviously)’. Now, let’s face it, that statement left the ballpark wide open, as something smaller covered most of the automobile field, with the Packard coming in at 5.2m (17ft) long by 1.97m (6ft 4in) wide. The diminutive Austin was smaller and would certainly be easier to house. A phone call was made, and a trip to Scotland followed. After a bit of discussion, the deal was done and the Austin was swapped for the mighty Packard.

Prior to finding its way to Scotland, the Packard had originally been found in a barn in Atlanta, Georgia. It was in a pretty sorry, but stable, state, with rusted and pitted chrome, and its bodywork was in need of full restoration, although without too many holes. It was going to be a time-consuming project, but one that would be well worth the effort. There are some that would love the car in the condition it was found and left it that way. This, however, was not to be one of those cases. For the restoration, the car was fully stripped down and stripped back to bare metal ready for a respray in the silver/ grey it wears today. During this process the electrics underwent extensive rewiring to bring everything back up to the required standard.

The mighty straight-eight engine block still had some of its original blue paint and was mechanically in reasonable condition. The block is a side-valve affair, with two valves per cylinder. Getting access to the block takes a bit of effort, as the hood opens in a similar fashion to the 40s Buick Eights, hinged on one side, by pulling a lever below the driver side console. By pulling another lever on the passenger side, the large and heavy hood can be fully removed, giving unhindered access to the large engine bay. With these cars it’s all about perspective; the engine bay is so large, that even this big straight eight block looks lost within the space.

To help performance of the Packard’s naturally-aspirated petrol 4.7-litre engine, the carburettor had been rebuilt. And perform this car does. For a car that weighs in at around two tons (1755kg), it can still pull 0-60 in around seven seconds. A manual three-speed transmission (or what Packard called Selective Silent Synchronized.) pushes the power out to the rear wheels. Top speed was listed at 88mph, although we reckon that handling could be a bit of a challenge at that end of the speed. For a car of its size and weight, the Packard could hold its own and even during its final years of production the cars saw a modicum of success, taking part in the Pan American Road Race, against factory-race prepared Lincolns.

Prior to Declan getting the car, the Scottish owner fitted a new dual action fuel/vacuum pump, along with a new Pertronix ignition module and a new rotor arm and distributor cap. No matter how many times I asked Declan to move the car during the photoshoot, the car fired up first time, every time. Once restored, the Packard found roles in TV and movies, with a list of credits which include film and TV appearances. Back in 1949 you could buy this car for $2299, which was a lot of car for the money. The interior is cavernous, with large bench seats in both the front and rear, the front seat backs pivoting on a centre hinge to allow unhindered access to the rear cabin. Little touches include the adjustable armrest on the door, which allows you to make minor adjustments to the position of the small armrest.

Despite being a 40s classic American, the overall feel of the car is that of Art Deco influences, and this was one of the problems for Packard; they had simply not moved forward as their competitors had. Whilst we might look at this 1949 model with enthusiasm, back then this car was looking dated, as was the engine – GM was already equipping its Cadillacs and Oldsmobiles with their high-performance overhead V8 blocks, whilst Ford and Buick followed swiftly with their own V8s. By the late 40s, Packard had well and truly lost the market lead which they had carried for years with the solid straight eight, and within a few years they were in trouble from the likes of Chrysler and Buick. Packard became known as the last of the straight eights, eventually phasing out the straight eight in 1955 with the introduction of Packard’s own 320cu in V8 engine.

The instrumentation is clear, but takes a little getting used to. The left-hand speedo, which simply reads 1, 2, 3 etc, as opposed 10, 20 30mph, is simplistic, yet effective. The right-hand main dial is a large clock with four small indicators between the main dials showing temp, fuel, oil and a battery-charge indicator. One unusual touch is the vertical radio, with its push buttons and dial reading top to bottom as opposed to the traditional left to right. The instrumentation panel is illuminated by what they termed ‘Flite Glow’, known to us as Black Light; this came on with the headlights, or could be switched on separately.

The wood console gives a rich feeling to the cabin. Unlike the 1948 model, where the windscreen-wiper switch is on the window frame, the wipers are operated by a chromed knob found halfway down the steering column. Many of the main switches are to be found in the ‘Console Key Instrument Panel’; this is the chromed grille to be found in the centre of the console. The switches covered map lights, blower and other essentials. Below the main grille were the two-tone coloured Bakelite knobs for the heating controls. However, all was not well at the Packard HQ. The stuffy, old-fashioned styling and old-fashioned flathead engines were causing problems for Packard’s marketing, and the specifications just were not cutting it any more. To maintain production volumes, base version Packards started to be marketed as taxi cabs, something that rapidly put off luxury buyers from purchasing a Packard, as the brand became ‘cheapened’. The Packard name would struggle on for a few more years, before finally disappearing from showrooms in 1959/1960.

When you see this car on the road, it commands a presence which many other cars cannot even dream of. From the front fender the car flows up and past the two doors into a great swooping curve down to the rear fender, giving this car a fantastic side profile. Packard produced around 59,390 cars in 1949, split across the extensive range of model variants produced. Driving these leviathans takes some getting used to. Firstly, there’s the obvious factor of it being a left-hand drive, where you have to be careful not to over-compensate. Secondly, there’s the little matter of a lack of power steering – parking can be a true workout, turning two tons around! It’s funny how something can go from being dated in its own era, to being a classic in ours, and even out on a weekday morning, the car still draws a number of admirers. I wonder which of the past three decades’ ugly ducklings will turn into tomorrow’s swans?!