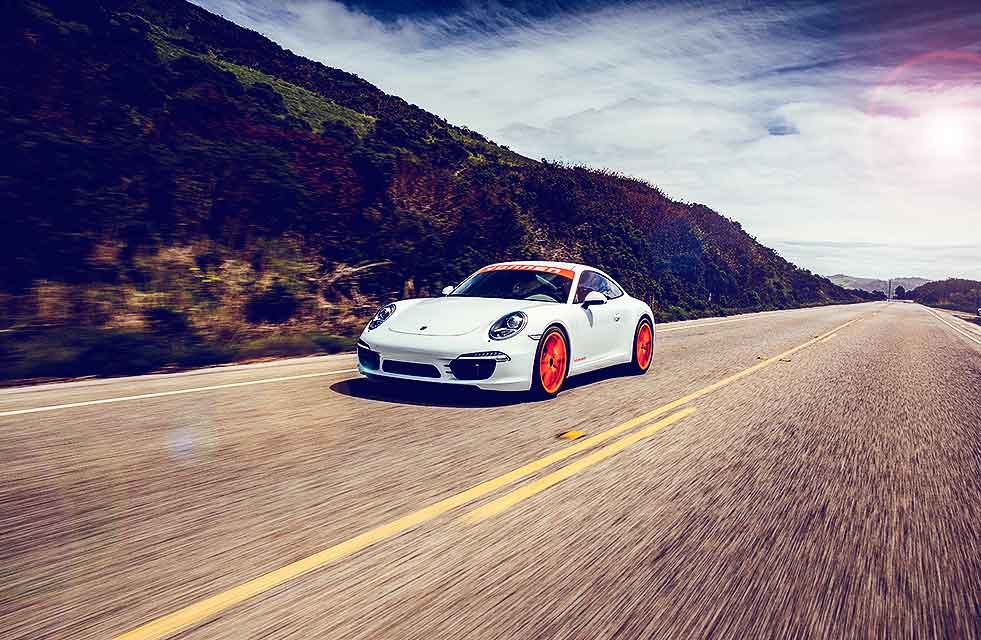 The hybrid 911 has arrived, but it’s not out of Stuttgart. Drive-My heads to California to test the Shadow Drive from Vonnen. Written by Kyle Fortune.

A company in the States has beaten Porsche to the hybrid conversion of its most precious sports car. Drive-My is one of the first to drive it 991 hybrid test.

“The internal combustion engine doesn’t realise it’s there,” says Chuck Moreland, owner of Elephant Racing. You might know the company – it’s a specialist in Porsche suspension – but here Moreland’s talking about the flat six in an early 991.1 3.4-litre Carrera. Specifically, he’s talking about the Vonnen Shadow Drive, Vonnen an Elephant Racing offshoot that’s developed a hybrid 911 before Porsche itself.

If it was going to be done anywhere outside Weissach, then it’s hardly surprising it was here. Vonnen is in California, specifically Silicon Valley, the absolute global heart of innovation and technology. Moreland explains how it happened: “It was a case of us sitting around talking among ourselves and thinking, ‘hey, wouldn’t it be great if…’. And then we started exploring different ideas of how you might hybridise an existing 911 platform.”

That was three years ago. Today we’re standing around an engine and gearbox, looking at the axial flux electric motor that Vonnen has developed with a European supplier, sandwiching it between the two. If that sounds familiar, it’s exactly what Porsche will do with the 992 to hybridise it, only it’s left space inside the gearbox to do so. With the 991 there’s no such luxury, so Vonnen had to get clever with the space it had.

It’s been a quick development cycle, especially considering this wasn’t Vonnen’s first solution. Initially Vonnen tried pushing electrically generated drive back into the gearbox via the front-axle output shaft on a 996 Carrera 4. Moreland says: “That was more a proof of concept, but we learned a lot from it, and we recognised that there was real opportunity for improving. The biggest issue was that the torque was being added on the output shaft of the transaxle, so we weren’t taking advantage of the gear-reduction capabilities from the gearbox.”

Buoyed by the potential, Moreland went all in, saying: “Okay, cost be damned, what if we wanted to make this thing rip? What would we do?” And so we went back to the drawing board and this is what we dreamed up, and it basically addressed all the issues that existed with this car. And that’s how we got where we are.”

Squeezing an electric motor between the engine and transmission adds 26mm in length. That’s required some modification of the structure fore of the gearbox to allow clearance, the electric motor replacing the flywheel, as well as the starter motor, and taking over all the functionality of it, including stop-start, if fitted. The batteries powering it are situated in the luggage area, robbing it of some space. The batteries are of a chemistry and output that Vonnen isn’t currently prepared to reveal, though they’ve been picked specifically for their ability to both quickly provide power as well as accept charge. It’s a self-charging hybrid, too, scavenging power from the internal combustion engine when possible, as well as featuring a regenerative effect when braking. You can plug it in, but it’s not a means of charging it, rather a maintenance possibility in the same vein as leaving the 12-volt battery on your conventional 911 on a conditioner during periods of inactivity.

There’s a cooling circuit for the hybrid inverter and electric motor, the only visible element of the Vonnen Shadow Drive being that inverter situated under the rear window. It doesn’t have to be, though, admits Vonnen’s VP of engineering and ex-Tesla engineer Bill Davis, saying if owners so desire it can be hidden from view. Do that and the system really will live up to its Shadow name, with no obvious clues as to its fitment. It inevitably adds some weight, however, the Shadow Drive adding 77kg to the kerb weight, that gain not so much as it’s aided by the loss of the heavy flywheel and starter motor.

The motor generator unit – or e-motor – pushes an additional 150hp and a maximum of 200Nm through the transmission depending on which mode you’re in. Here it’s hybrid tech not for parsimony, but instead performance, though fitment does nothing to change the smog rating, that crucial in its Californian home market. This isn’t a hybrid you can smugly glide under electric power alone into a low-emissions zone, the electric motor not able to be driven independently of the internal combustion engine. It’s an assist that supplements, rather than replaces. Tantalisingly Moreland says it can, in theory, be fitted to any 911, whether it’s manual, automatic, rear-or four-wheel drive, turbocharged, naturally aspirated, water- or air-cooled, or stock or tuned. Proving that, Vonnen is currently running a development Shadow Drive on a GT3.

On older cars Moreland admits there would need to be some additional micro switches and sensors for the system to know things like the accelerator position and suchlike, that information in more modern cars having the Shadow Drive’s brain simply reading the CAN Bus data. Otherwise the engine management isn’t in any way altered, the Shadow Drive exactly that, working along in support. That explains Vonnen’s name for it, which Moreland initially describes as “made up” before mentioning that it also relates to Viking boats that used both oars and sails for the best speed.

That’s an apt description of how the Shadow Drive operates: its additional power quietly assisting, giving the flat six a near-silent boost. The support it delivers is selectable through differing driving modes via a Bluetooth-tethered smartphone app, the three available driving modes being Street, Sport and Overboost. Street adds 125Nm of torque from 40 to 60 per cent throttle, Sport 0 to 110Nm from 65 to 95 per cent throttle and Overboost adds the full 200Nm with the same accelerator application as Sport.

The full torque load isn’t used in anything but the Overboost mode, as Moreland admits doing so quickly overloads the thermal capacity of the e-motor, lessening the opportunity to use it. He admits it’s a compromise, but one that’s balanced. Meanwhile Vonnen is working on an improved cooling system for the motor.

In the 3.4-litre 991 Carrera the Shadow Drive adds drive through a PDK automatic, the gearbox software having had a reflash to stop it from slipping with the additional torque loads. Starting up the Vonnen-equipped 991.1 3.4 Carrera is no different from any other Carrera. The internal combustion engine is started by the e-motor, even if the system is otherwise off.

Its effect in Street is initially so subtle as to not realise it’s working. There’s none of the incredible step-off acceleration that some hybrids and all electric cars offer, the Carrera feeling very much like a regular combustion-engined car. That’s because it essentially is until you find yourself deeper in the throttle, where the e-motor starts to provide its energy into the system. Its linearity is such that it does so without any spike or noticeable boost, the Carrera merely gaining speed with more authority. It’s unusual because the gain isn’t accompanied with a more menacing engine note, or at least one that you’d expect with the gain in performance that comes with it. It’s perhaps best described as if the flat six finds itself having to shift less mass, or there’s a surging tailwind – one significant enough to surprise you when you glance at the accelerator. In Street mode I’d like a little bit of additional assistance earlier, just so you know more often where you’ve spent your $75,000. It’s not cheap, but it is new tech, and since when was gaining power in 911s ever inexpensive?

There’s a slight electrical whine from the motor when it’s giving its assistance, but it’s not an unwelcome sound. Think of it as akin to the whistle of a turbocharger or the whine of a supercharger. You can watch your smartphone’s screen if you want to see what the hybrid system is doing, whether it’s regenerating, the status of the battery, the heat in the motor or when it’s giving all its assistance.

In Sport mode on a more interesting Californian mountain road is where it really comes into its own. You learn to lean a bit more on the elasticity of the electric assistance when exiting bends, getting on the throttle early and enjoying the punch out of corners. In the bends there’s no perceptible difference thanks to the increased mass the system brings, the Carrera not feeling unbalanced or changing dynamically over its stock alternatives.

Overboost allows full use of the additional torque, allowing the Vonnen 3.4 Carrera a standing start that feels Turbo-like in its off-the-line urge. Vonnen’s yet to figure it, but with a combined circa 500hp and near-600Nm of torque it’s not difficult to imagine it matching its forced-induction alternative.

It’s a neat trick, a stealth tuning that gives you the potential for increased performance while not removing the character and appeal of the standard car you fit it to. It’s impressive in the 991, though arguably the greatest opportunity exists in the older cars where the electric motor’s boost would add contemporary performance when you want it, yet still allow the car to retain all its originality and be driven so when you want to. An electric-only mode would be a useful gain, too, particularly as more and more cities demand zero emissions. One thing is certain, a hybrid 911 presents an opportunity, and Vonnen’s proved it works, Silicon Valley beating Stuttgart in the race to produce it.

BELOW Battery packs are fitted in the front boot and contribute significantly to the Shadow Drive’s additional 77kg weight. BELOW Vonnen’s cutaway daigram shows its inverter, electric motor and battery packs (front) in place.

ABOVE Street, Sport and Overboost modes are selectable via the Shadow Drive’s Bluetooth-tethered app. LEFT Vonnen’s Shadow Drive adds a healthy 150hp and 200Nm torque to any 911 model, though there’s no fully electric mode available – yet.

Proving that we shouldn’t be scared of a hybrid 911, Vonnen’s Shadow Drive adds performance without any real compromises, except price.