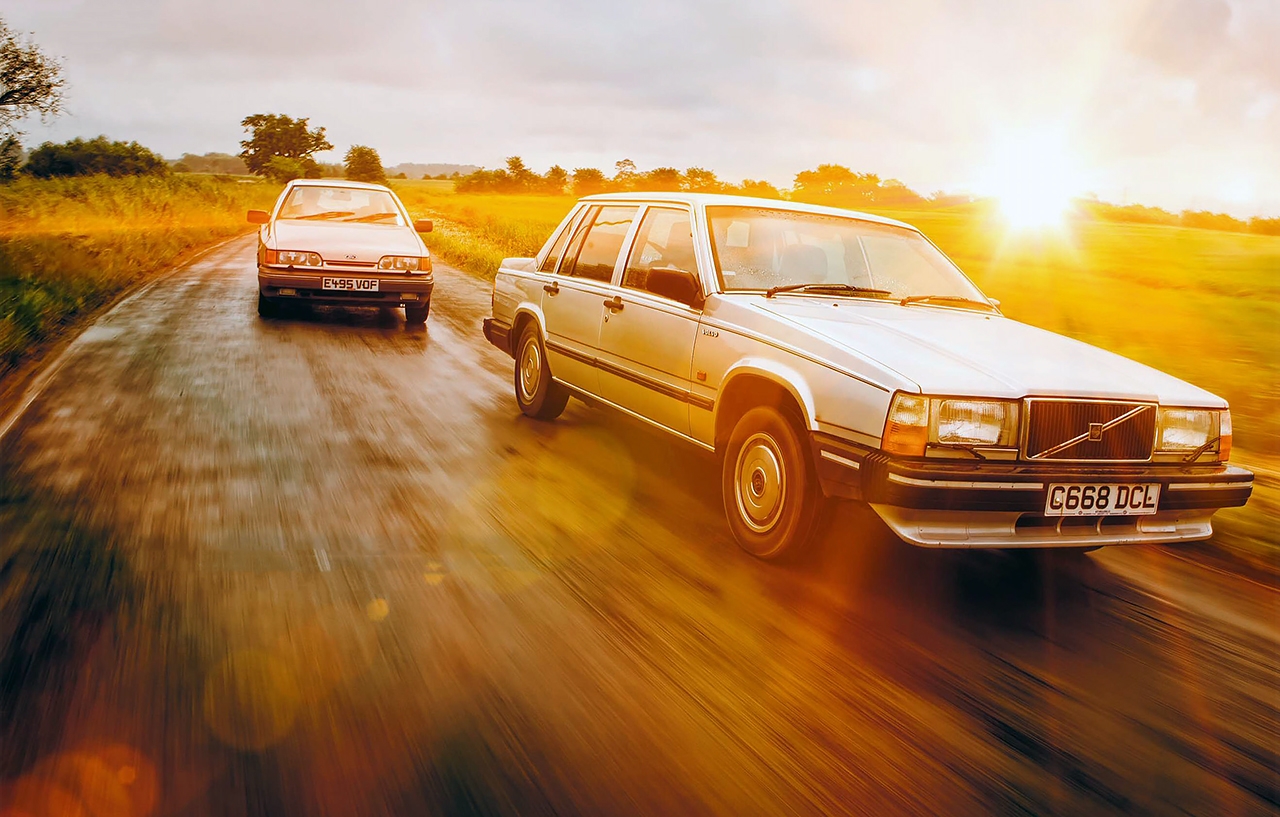 Fast Lane Warriors Volvo 740 vs. Ford Granada. Enjoying the fast lane heroes your dad drove. Among friends. Two doyens of the 1980s fast lane, the Volvo 740 and Ford Granada MkIII, come head-to-head for an old-school rematch. Two doyens of the 1980s fast lane come back for a re-match. Does Sweden’s finest have the kudos to see off the pride of Uncle Henry? Words Nathan Chadwick. Photography Neil Fraser.

These aren’t just cars. For the drivers who piloted them from anonymous business park to anonymous business park, they were much more than transport. With a life that seemed a never-ending hamster wheel, punctuated by service station food and furtive B&H inhalations in remote laybys, cars like these became companions.

For those who grew up in the back of them, the sons and daughters of said cigarette-shuffling business types, again these are no mere automobiles. They’re vast playpens, battlegrounds with siblings, a front-row seat to the vast world flashing past the windows. Childhood imagination would turn bits of trim into intergalactic stargates, perilous deserts, rally stages and more. Much like a Labrador, these cars were part of the family. 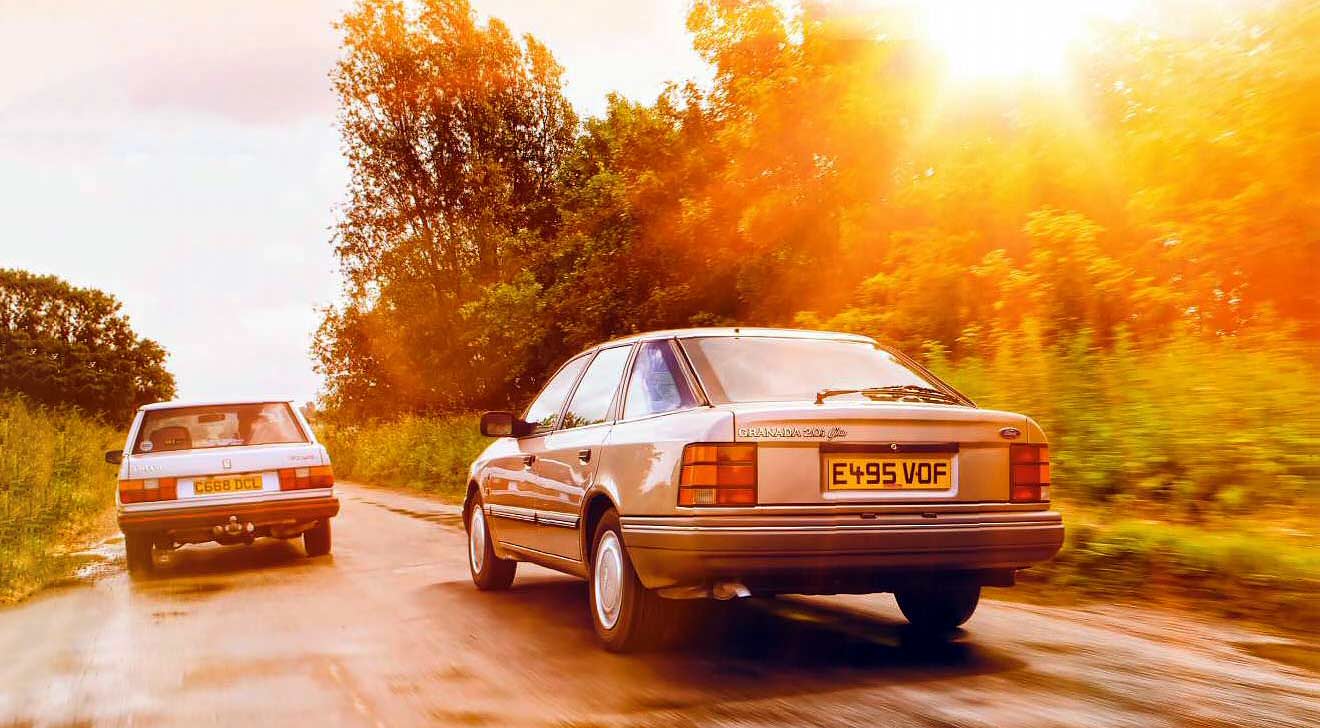 Unlike our canine pals, however, it was a love that was soon forgotten. Once replaced with something newer, cars such as these were thrashed, crashed and reincarnated as drinks cans.

That means the Ford Granada and Volvo 740 before you are rare survivors. They approach the executive express routine from very different positions – but which makes the better Modern Classic now?

These two couldn’t be more different. The Volvo, even at launch (as the V6-powered 760) in 1982, was dated. From certain angles it looks American in its square-jawed manner. The USA, after all, was a key market for the 740 – not long before the 700-series’ launch, Volvo had celebrated its millionth car sold there.

Swap the badges for Chrysler ones and you’d be hard pressed to see the Swedish design influence. Almost mirroring the breezeblock visuals, the 700-series was no technical tour de force. The 760’s V6 was an 2.8-litre version of the 2664cc ‘Douvrin’ engine used in the old 264.

Heck, it didn’t even have independent rear suspension, which was pretty the class norm by this time. By the time the lower-priced four-cylinder 740 arrived in 1985, its only frontline rival to retain an old-school live axle like this was the Rover SD1. Not that Volvo buyers cared in the slightest. Oh, no – they would continue buying these flying bricks in big numbers until 1992. Even then, its replacement, the 900-series wasn’t that different to look at.

The Granada MkIII (or Scorpio, as it was known everywhere other than the UK and Ireland) certainly was a big change. After the square-rigged Granada MkII, the new MkIII was something of a shock. Its collection of smooth shapes and unobtrusive detailing combine to create a car that still looks modern today. Its stylist, Patrick Le Quément, once joked that the Scorpio was a simple scale-up of the Sierra – that certainly looks the case now.

Like its smaller brother, the Granada was a highly aerodynamic bodyshell that clothed fairly conservative mechanicals. The underpinnings were similar to the Sierra’s (and not that different from the Granada MkII), and the engine line-up comprised of well-known Pinto four-pots and the Cologne V6. Its biggest innovations were that all models came with standard ABS, and you could specify a heated windscreen. And unlike the Volvo, at least the Granada had a sophisticated independent rear suspension set up.

How things have changed with the passage of time. Of the two it’s the Volvo that’s the more interesting design, simply for its brutality. You could imagine the 740 trundling around a trendy London district, much like that other Swedish doyen of the Vice-reading classes, the Saab 900.

The Granada just looks, well, secondhand. It does, however, have the all-important ‘i’ on its rump – just the thing to keep up with the reps at the motorway services. The 740 has no such adornment, just a mid-range GLE moniker.

The Volvo looks much more special inside, though. There’s the vibrant red seats, which are comfortable and supportive, but there’s not much in the way of adjustment. The steering column doesn’t move either.

That rationality extends to the simple dashboard, but is best exemplified by the big, chunky gearleaver that feels like you’re shifting railway points. It’s all very rugged.

Inside, the Granada looks more modern, but not in a good way. The Ford’s mixture of beige and black plastic has dated badly. Being a Ghia, there’s loads of equipment, with electric windows, air conditioning and countless buttons to investigate. The seats are firm yet comfortable, and the steering wheel is pleasing to handle, if not look at. But, looking back to comparable cabins of the same era, the moulded curvy plastic and masses of space (especially compared with the 740) must have felt like going from Economy to Business class.

The Granada’s lot improves when you turn the limp-feeling, plastic-bodied key. The 2.0-litre engine fires with a zest, and settles to a whisper-quiet idle. Get up and running and the engine’s willing to rev, though hooligan execs would have to work the kickdown pretty hard to get the best out of the gearbox.

But it can be reassuringly brisk, and quiet too. Perfect for listening to Brian Redhead interrogating his latest politician victim on Radio 4’s Today programme. If you prefer torque to talk, all 118lb ft comes in at 4000rpm, giving you enough punch to get past most dawdlers in the middle lane, but the automatic gearbox is quick to shift up. Probably best to cruise – wouldn’t want to upset the fleet manager, now would we?

The Volvo is altogether more measured in its pace, despite the extra horses corralled under that long, Jan Wilsgaard-penned bonnet. That’s due to the extra 50kg it has to haul around. It’s also much noisier – perhaps the huge induction noise is useful for warding off elk – always safety conscious, Volvo. But it’s a much more tiring place to be, with lots of roar even before you pin the pedal to the floor. When you do, there’s a theatrical girding of loins, but not much in the way of faster onward progress.

Things don’t get much better in the corners, with the 740 feeling resolutely leaden. Though we’d rather disappoint our insurance provider in the Swedish offering, there’s not much fun to be had here. It is solid-feeling, and safe – which was the point. But for enthusiasts? Nej tack…

The steering, while firm, lacks much in the way of feel. It may be rear-wheel drive, but it’s not a car you’ll feel comfortable flinging about – press too hard and there’s huge dollops of understeer to contend with. But drive it as intended, and the 740 makes a relaxing companion, ambling around smoothly. The suspension’s wallowy and creamy smooth, the body roll a bit like tobogganing with an old mattress – but in an endearing way.

The Granada is much more entertaining; the Ford is light, crisp and progressive. Become a little more enthusiastic at the expense of the company’s fuel card and the Granada seems to shrink around you. The suspension is compliant, the damping smooth but without slop and there’s plenty of grip. Robert Lutz, Ford’s executive vice president – and handy driver himself –was determined to make the Granada out– handle a BMW 5-series. While we wouldn’t go that far, it’s certainly a lot of fun, if pressed. And if things do go wrong, there’s the ABS to rely on – a first for the Granada. But which would you choose – staid but stylish or zest but Z-list looks?

The Granada’s roof-mounted clock is a lovely throwback to your bedside table,’80s style. Even the shifter for the three-speed auto is brutalist in design on the Volvo 740. Mix it up in style when you choose either one of these middle-manager specials from the golden era of the motorway service station.

Feel the beige. The beige and brown plastic and fake wood must have seemed like a rapid ascent up the company car ladder in the 1980s. While an excellent time portal, it lacks the simple charm of the Volvo. There’s plenty of room, however, and there’s plenty of equipment to play with on those long-haul trips along the motorway to yet another meeting…

Digital Marvel. The Granada’s roof-mounted clock is a lovely throwback to your bedside table,’80s style.

Take it as red. Eye-popping red velour contrasts with functional but fabulous switchgear.

Big selector. Even the shifter for the three-speed auto is brutalist in design on the Volvo 740.

Generous sounding praise. Ford made a big deal of its modular in-car entertainment systems in the 1980s. It pushed separate amplifiers, graphic equalisers, and faders, all of which were branded with the Blue Oval. You’d not get away with that tactic now, in a premium market where badge is king. This six-speaker set-up does a good job of filling the Granada’s vast interior. 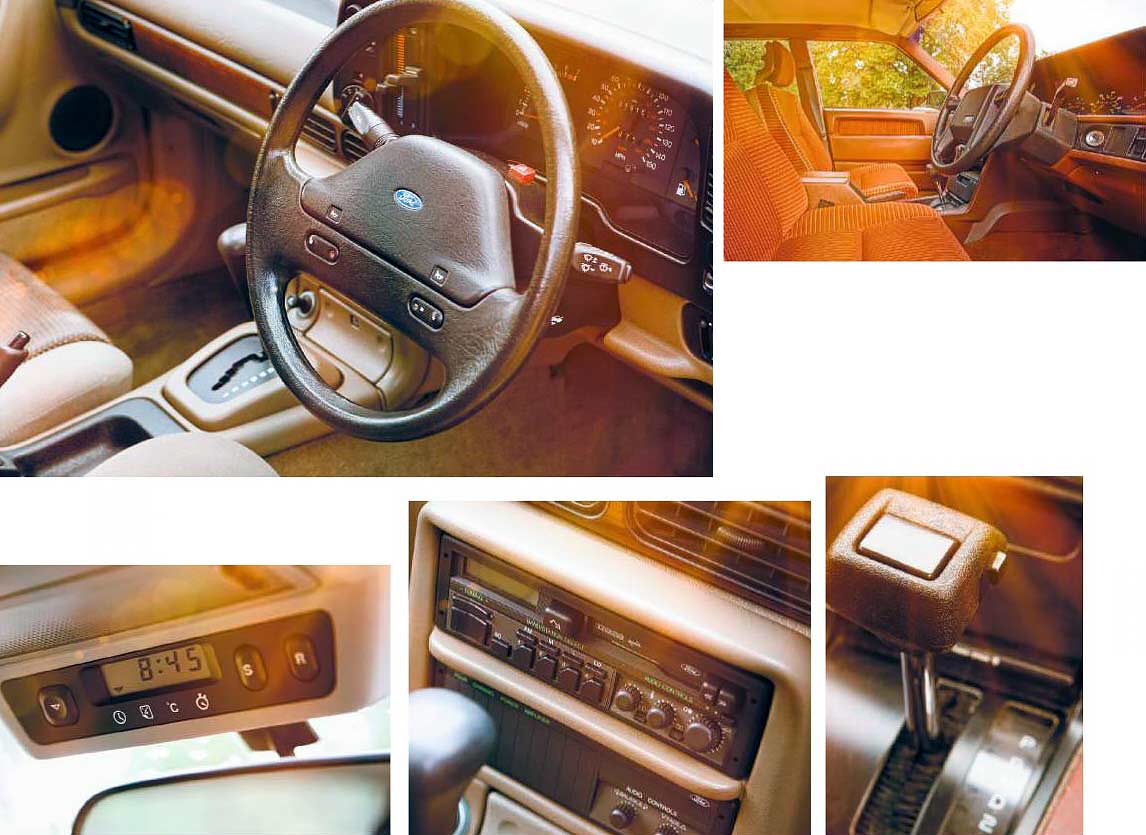 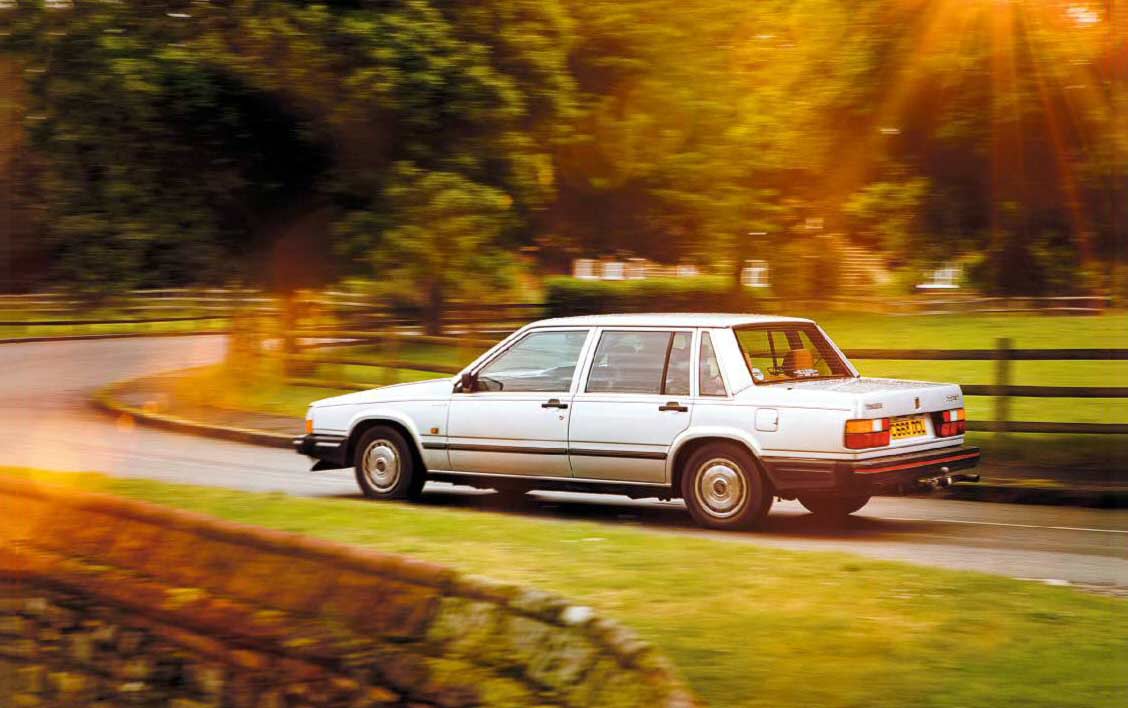 Both cars deserve respect, but for very different reasons.

The Granada, despite its old-style automatic gearbox, really is an engaging drive. It’s nimble, quick and genuinely entertaining if you decide to get frisky with it. The Ford’s also a much more relaxing place to be, with plenty of room to stretch out and soak up the miles. However, it does just look like a secondhand car. Where once curves were radical, now it’s hard to think of a vehicle with a 90º edge on it. Therefore the Granada just looks like the first stage of an evolutionary process to the state of car design as we see it now. That’s not to say it’s ugly – far from it – but would you be casting loving glances back at it from across the car park? Most probably wouldn’t. Yet.

The Volvo, however, will. Its sharp, brutal style is like nothing we will ever see again, and that’s what makes it such an intriguing design now. OK, so it doesn’t handle with aplomb and neither will you be itching for another invigorating exploration of the country’s twistier tarmac, but that’s not the point. It’s big, tough and well-built, which is what Volvos are for. Add in the red velour interior and you’ve got style and substance.

That makes the Volvo a fashion statement – and as such, even ropey ones are selling for £1500. The very best could easily go for much more than that. And while fashion is fickle, the 740 should have character enough to survive.

The Granada’s future is much more uncertain. There’s a frenzy for most things with a Blue Ellipse on the snout, although it seems to have bypassed the non-Cosworth Granadas. But this car is much rarer, with only 19 left – worth bearing in mind. We’d take the 740. It may not drive fantastically, but the Volvo takes its driver right back to the 1980s. And does so in a wonderfully Swedish and, therefore, timeless way.

The Volvo is more at home than you’d think in the lanes – but it’s far from fun when going quickly.

The Granada’s styling was forward-thinking, and leaves it looking almost modern today.