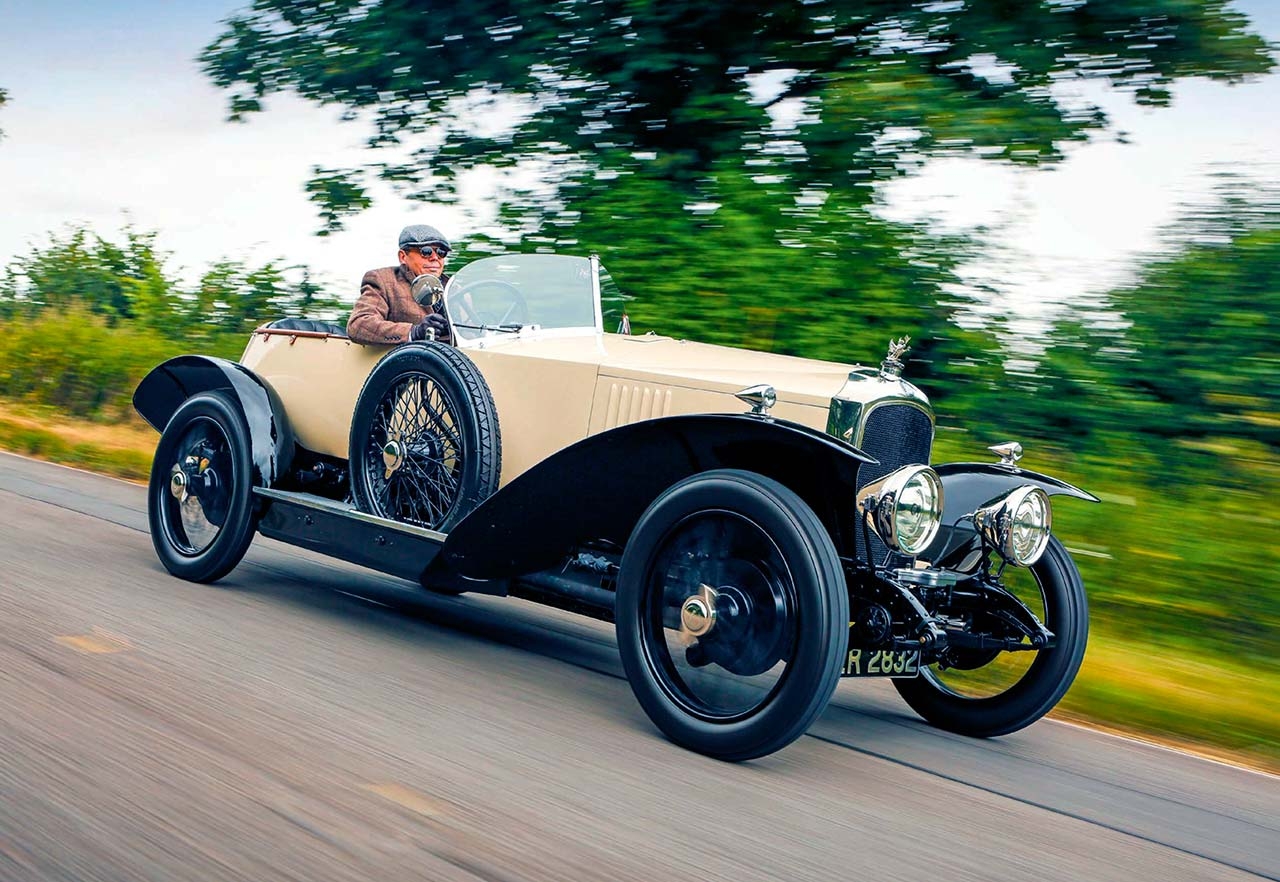 If you judge a car by its previous owners, then this Vauxhall 30-98 Wensum, once nicknamed ‘The Yellow Peril’ by Eton schoolboys, is remarkable. Throughout its 90 years, this rakish vintage thoroughbred from Luton has been prized by its distinguished custodians and has kept company with the world’s greatest machinery.

It’s hard to imagine the Bedfordshire town being the home of a premier marque, but the 30-98 was a match for Bentley and Sunbeam in the early post-WW1 years. In some minds, the development of the Prince Henry into the 30-98, with its gutsy 4½-litre pushrod ‘four’, is rated higher – notably the ultra-desirable Wensum.

Always drivers’ cars, despite their reputation for poor brakes, many of the 313 OE models built lived tough lives with three out of five being sold to Australia. Unlike other survivors, though, the car featured here, OE141, has rarely been off the road and remains highly original thanks to cherished ownership over the decades. When WW2 hostilities ceased, OE141 was one of the first cars to be recommissioned and was selected for the 1946 Jubilee parade through London.

‘ON NARROW, BEADEDEDGE TYRES THE STEERING IS SUPERB, WITH FLUID WEIGHTING’

The Wensum was conceived by Vauxhall’s London agent Shaw & Kilburn to boost sales of the 30-98. Influenced by the fashionable skiff body style developed by Labourdette, the nautical look drawn by Vauxhall’s own Jock Hancock was inspired by a boat that he kept on the Norfolk Broads. Sporty modifications included a raked steering column, lower ’screen and easy-reach outside gearlever. With the introduction of overhead valves for the shorter-stroke, 4.2-litre OE, the ultimate Wensum was developed for Major Coe, a Brooklands racer, who lapped at more than 90mph in the new model. As well as it being the talk of competition events, Coe’s car also won a concours at the Boulogne Speed Week in 1924. Orders soon started to surge.

Few Bentley 3 Litres matched the raffish lines of the new 30-98. Hancock had a great eye and, with the car’s flared wings, long bonnet, motorlaunch type split ’screen and elegant tapered rear, the Wensum really enhanced Vauxhall’s image. Other coachbuilders tried to emulate the styling but none came close to the shape of the factorybuilt body, which cost £1300 in 1924.

A spare wheel is mounted on each side of the slim, doorless bodywork, so the Wensum is not the easiest car to climb into. Entrance is best attempted from the passenger side. The steeply angled aluminium dash panel augments the nautical flavour with a fine array of white-on-black dials around a bold, central CAV ignition cluster. With the handbrake and gearlever both external, there’s plenty of legroom and, once you’re ensconced on the buttoned-down leather seats, the view forward is commanding.

The big ‘four’ has a deep, earthy rumble and pulls strongly from low revs, delivering smooth, lusty torque. The clutch is heavy, but the gearchange is a joy. From first – inside and forward – the deep slice through the H-gate has a delicious mechanical feel that makes silent swaps extra rewarding. Timing downshifts when doubledeclutching is eased by the eager engine, but the modified right-hand throttle doesn’t feel natural.

On narrow, beaded-edge tyres the steering is superb, with fluid weighting and fast gearing. The 30-98’s brakes, particularly early rear-drum only models, have reputedly driven nervous owners to drink but, thanks to specialists, this example has plenty of feel – plus the handbrake is impressively powerful. In an emergency, the lever will lock up the rear and must be used judiciously, so the best precaution is to read the way ahead carefully, just like a motorcyclist, to avoid dramas. When the road is clear, the handling feels predictable and balanced. This fabulous machine must have been a joy to drift through bends, as proven by shots of 30-98s at dramatic angles on the loose surface at Shelsley Walsh in the ’20s. Little wonder all of the previous owners relished driving this yellow beauty so much.

Chassis OE141 was one of the first Wensums ordered. Painted Lake (light blue), the ultradesirable Vauxhall was sold through a Cambridge dealer to Charles John Paget Dorman, a wealthy young undergraduate. The body was soon repainted a creamy yellow, with later owners including Hylton Ralph Philipson, who kept OE141 at his castle near Stobo in Peeblesshire, where the car was a familiar sight racing around deserted Border roads. It kept company with Philipson’s new Hermes Moth biplane.

After his death at just 31, the Vauxhall passed to his brother-in-law, Aubrey Claude Beasley- Robinson, another colourful character that OE141 seemed to attract. Educated at Eton, he served with the Royal Field Artillery during WW1 until wounded in action in 1915. He eventually returned to Eton in 1920, to teach maths and coach the rowing team. Keen horseman Beasley-Robinson adored 30-98s, keeping two – including a Velox – at the school. When he became a monk with strict vows of poverty, he gave OE141 to his sister who kept it until 1953.

The Wensum was then acquired by Anthony Geike-Cobb who instructed Alfred Stradling, an east London-based engineer, to restore the well worn OE. After three years and 2800 hours’ work, the car was delivered back in ’1961 – together with an extensive instruction booklet produced by Stradling. As well as maintenance and driving advice, the notes feature much humour, including ‘use your loaf’ and ‘Oh, Mr Bentley’.

The rebuilt car was used by Geike-Cobb as everyday transport around London, raced once at Silverstone, and became a regular concours winner – the owner was later asked not to enter again to give other people a chance. Geike-Cobb loved driving the car, and delighted in sharing its strong performance with friends. At a steady 70mph, he’d mischievously open the exhaust cutout much to the surprise of passengers and other road users as ‘The Yellow Peril’ roared by.

OE141 had impressed the Hon Patrick Lindsay when he’d spotted the 30-98 motoring around London. After several requests, he finally bought it in 1970, the Vauxhall joining one of the most famous English car collections alongside the Napier-Railton, ERA ‘Remus’ and one of the finest Alfa 8C Monzas. Lindsay kept OE141 at his home in Bayswater and, as head of the old masters department, he regularly drove it on Christie’s business to clients. Always a ‘press-on’ driver, Lindsay often alarmed his colleagues when they joined him on windswept trips in the hoodless Wensum. Lindsay sold OE141 after two years, but always regretted letting her go.

OE141 has attracted assorted automotive connoisseurs, none more so than Bruce Spollon. During 28 years of ownership, he enjoyed the distinctive yellow Wensum possibly more than anyone. Spollon picked up the Vauxhall from Holyhead in 1977, and instantly prepared it for the Welsh Trial, a pre-war-type event that mixed observed off-road sections with enjoyable road miles around Presteigne. Over the next 18 years, the 30-98 contested all the VSCC trials, the heavy, near-standard machine always driven four-up with gusto. The sight of the handsome car storming the legendary Drumhouse section at the head of Honister Pass in the Lakes – or launching off muddy crests on high-speed sections over the Welsh border hills – was a feature of the era. Spollon, who was an apprentice at Austin, and later VSCC president, always kept OE141 in superb fettle, and argued that the great car was only doing what it was designed for.

After the Spollons, the 30-98 had a succession of enthusiastic owners including Bill Ainscough and later Peter Rea. Once the engine had been rebuilt by Bill Mitchell, Rea took the vintage beauty on a trip through Italy to the Targa Florio anniversary rally. Running the car on period-type beaded-edge tyres, Rea revelled in the robust performance of the big ‘four’, following the wheeltracks of Latin legends around the famous mountain course. The Sicilians applauded the oldest car on the event all around the route.

Michael Kadoorie had long wanted a Wensum for his collection, and acquired OE141 after an approach to Rae in 2007. Ever the perfectionist, Kadoorie instructed Keith Bowley of Ashton Keynes Vintage Restorations for a full rebuild. During the stripdown, it was discovered that the chassis was out of true and the front axle was twisted, so the frame was dispatched to 30-98 guru Julian Ghosh for straightening. While the running gear was being fettled, Bowley’s coachbuilders set about the bodywork. The skin was removed from the wooden frame and carefully sand-blasted. The car’s history was revealed, including evidence of a cutaway door modification made by Beasley-Robinson in the early ’30s.

“The steel wire around the aluminium had corroded badly and was replaced by stainless, while the panels were carefully cut, repaired, and welded up,” says Bowley, who was determined to preserve as much of this historic machine as possible. “The handbuilt ash frame had stood up remarkably well after 85 years’ active life. The planked teak decking that so defines the Wensum only required polishing.” A stickler for authentic detail, Bowley replaced all of the incorrect round bolts with hexagonal fittings. The seats were retrimmed in horse hide with proper stuffing.

And all the plating was re-done with nickel. Mechanically, the car was tired. The engine was overhauled with new bearings and a special four-branch exhaust, while the worn ’box was fitted with a fresh gear set. All of the roller-bearing universal joints in the propshaft were renewed and a cracked gearwheel in the differential was replaced. The exhaust cutout was also rebuilt. The brakes were improved with the help of Arthur Archer, who coupled together the front and rear stoppers. For practical use, the brake pedal was moved to the left of the accelerator.

The Wensum was never offered with a hood and, to make the car more usable in English weather, Bowley fabricated a neat conversion without modifying the body. The frame and cover are cleverly stored in new trays beneath the running boards: “The Wensum has always been tricky to get into, so we made leather caps to protect the original wooden door tops.”

By 2012, OE141 was ready for testing, with over 1000 miles covered around the Bath hills to fine-tune the brakes, cure a wheel wobble and adjust the steering to make it as light and direct as possible. A final detail was an elegant pair of rear-view mirrors crafted at Ashton Keynes. The finished car was shown to the public at the first Windsor Castle Concours of Elegance to mark the Queen’s Diamond Jubilee. Lined up with stately ex-Maharajah Rolls-Royce Phantoms and brutish-looking vintage Bentleys, the Wensum seemed sleek in comparison – confirming its original appeal as the ‘sportsman’s choice’.

It was appropriate that OE141 made its debut at Windsor because the car spent nearly a quarter of its life at Eton when it was owned by Beasley- Robinson. During the 1930s, the handsome yellow 30-98 was a familiar sight burbling down the High Street at a swift pace full of schoolboys en route to the boathouse on the Thames. Long may this wonderful car be enjoyed out on the road, just as previous owners have done.