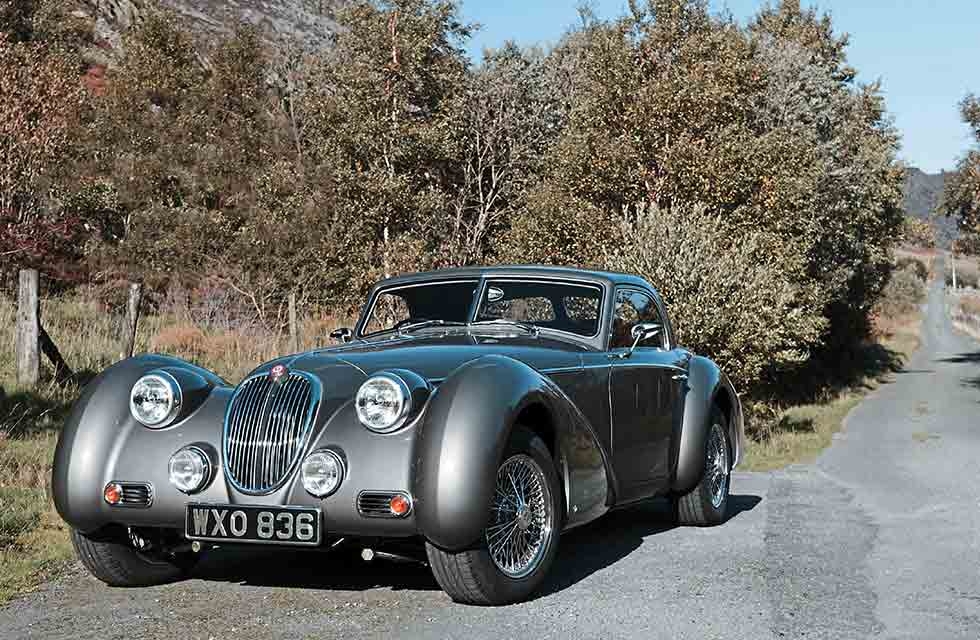 What might have been Modified Jaguar Royale Special. The Royale Special is one man’s view of what might have come between the SS 100 and XK 120. Handmade, unique and using the 3.6-litre engine, we talk to the man behind this striking car before driving it ourselves. Words & photography Paul Walton.

It might look like a Thirties coupe, but this beautiful, unique car was handmade in 2017 using the 3.6-litre engine and independent rear suspension of an XJ-S.

Even before I understand what the Royale Special is, I know I want to feature it. Long, low and with the looks of a Thirties sports car, it is the most striking car I’ve ever seen. Yet its pre-war image is just a ruse, because it was handmade in 2017. I have a bag of dried pasta in my kitchen cupboards that is older than this car. Thankfully, though, there’s enough Jaguar DNA in the mix for it to be pertinent to Jaguar World, because beneath that voluptuous body is the 3.6-litre straight-six engine and independent suspension sourced from an XJ-S.

The man behind the car, John Barlow, might not be well known in Jaguar circles, but he’s something of a celebrity in the kit car world, having being involved with some of the most successful models since the early Eighties.

He started his career at Leyland’s bus and truck division in the Seventies, initially as a craft apprentice before moving into the technical side. Outside work, he always had an interest in kit cars. “They were the only way I could get into building vehicles without the huge finance required,” he says.

He left Leyland in 1981 and, along with two business partners, set up JBA Motors a year later, a manufacturer of pre-war look-a-like kit cars that he called the Falcon and Javelin. In 1990, he left JBA to start the Royale Motor Company and designed a pair of roadsters, the Windsor and Sabre. The former looked like a Bentley Mk VI, the latter the BMW 328. Unusually for kit cars, they were well built, and based on a substantial steel ladder-frame chassis clad in aluminium/glassfibre bodywork with reinforcing door bars for increased crash protection. Ford Sierra/ Granada running gear was the norm, with engines ranging from the 1.6-litre 4cyl to the 2.9-litre V6.

After starting another company in 2011 that specialised in large, pre-war-esque kit cars based on the FX4 London taxi – the Imperial – in 2017, John decided to take a step back from work and concentrate on his own project, a handsome coupe with pre-war styling cues.

Explains John, “My interest has always been with Thirties vehicles, mainly French and British coachbuilt cars. I see the Royale as a blend between the two – not totally outlandish (like the French were doing at the time), but a touch more reserved, which the British would have done.” His other aim was to design something that could have been produced by Sir William Lyons had the Second World War not broken out – a car that fits between the SS 100 and XK 120. “I think Jaguar was going that way,” he says.

John has always been a Jaguar enthusiast, owning his first, an XJ6 Series 1, when he was just 21. “They represent my own views in terms of quality, styling and drivability.” John also wanted to use an inline six because sports cars in the Thirties usually had them. Jaguar’s 3.6- litre AJ6 was a natural, affordable and attainable choice. John bought a 1989 XJ-S coupe that, as he puts it, was ‘past redemption’ and stripped it for parts. He then designed a totally new twin-rail ladder chassis, which incorporated the independent rear suspension sourced from the donor car.

John undertook everything for his car, from its design to making all the bucks for the body and then the moulds. “I do get immense pleasure from building vehicles,” he admits. In fact, because he enjoys the construction of the car more than its actual ownership, John soon sold the Royale to The Real Car Company, a Rolls-Royce and Bentley specialist based outside Bangor, in North Wales. It was this company’s online advert for the car that caught my attention and it’s there that I’m heading to drive this magnificent vehicle.

It’s a long drive from my house in the East Midlands to The Real Car Company’s premises close to the Snowdonia National Park’s mountains, and one that’s worth the miles as soon as I spot the Royale parked outside waiting for me. It looks even better in real life than online, because what the pictures didn’t capture are the car’s perfect proportions.

The long bonnet, round roofline and gently sloped rump lend the car an Art Deco feel – the sort of vehicle that the cartoon detective Dick Tracy drove around New York in the Thirties. The gunmetal grey metallic paint suits the car’s Thirties character, as do the fat 16in MWS wire wheels that glint in the autumnal sun like my mother’s best silver. I wonder if the nose is a little like John’s Royale Sabre kit car, but he corrects me: “The Sabre had full front wings, whereas the Royale has more torpedo style. I based the car on a Thirties style when separate wings were just starting to be incorporated into the body.” The prominent headlights and familiar oval grille give the impression of being more closely related to a Jaguar than it actually is. To play on that misconception further, John has even added a 3.8 badge from a Mk 2 or XK 150.

It’s obvious that John has a keen eye for detail, evidenced by the split rear window and delicate LED teardrop rear lights. The car is also beautifully made and it’s hard to believe the panels are created from glass fibre rather than steel because of how straight they are. “What I’ve done over the last 40 years is develop techniques to make GRP [glass-reinforced plastic] bodies stand the test of time. It won’t suffer from stress cracks or crazing because I’ve used my experience to change things and develop my own ideas that work.”

The exterior class is mirrored inside. The large white-on-black speedo and rev counter, plus the three auxiliary dials, are beautifully simple, while the plinth of good-quality burr walnut veneer is so shiny I check my hair in its reflection. Even the steering wheel is the thin Bakelite type, obviously sourced from a classic Jaguar, and although the Growler badge in the middle is modern, it’s a nice touch. The row of modern black plastic switches is a little at odds with the interior’s classic look, but it’s all well built and doesn’t squeak or rattle, the Achilles’ heel of many a homemade special. It’s comfortable, spacious and there’s even a large boot, ideal for touring. The only thing missing is air conditioning, but that could be added simply enough.

Starting the engine is via an old-fashioned- looking Bakelite button (how else?) to the right of the dash, and its 3.6 straight-six sounds meatier and gruffer than it does in an XJ-S due to the sports exhaust John has fitted. I slot the gearlever – sourced from the donor car – down into drive and gently squeeze the pedal.

More familiar with the slightly lazy nature of the XJ-S 3.6, I’m taken aback by the eagerness of this car, the keenness of its acceleration, which is due to the Royale’s weight. Although I don’t know what that is exactly, it’s obviously a minnow compared to the lardy XJ-S, resulting in a crisper performance. It’s responsive, too, and it doesn’t require much for the ZF four-speed automatic gearbox (robbed from the donor XJ-S) to kick down and produce a strong and instant burst of speed. Says John, “One of the car’s most important criteria was that it had to be useable in modern traffic.”

What surprises me the most about the Royale is its sublime handling. Take the steering, for example. It’s a little overassisted for my taste, but on the fabulous roads around Snowdonia it enables me to take corners with the same precision as a modern sports car. John’s clever steel ladder chassis and perfectly set-up suspension make the car feel light and agile as it dances through bends with the litheness of Fred Astaire. When I give the throttle the berries on the exit of a corner, there’s little noticeable body roll, the car remaining calm and composed. Yet, on the occasionally rough mountain roads, it can still ride over imperfections comfortably.

I appreciate that some readers will be dismissive of the Royale due to its kit car origins, while others might baulk over the £95k that The Real Car Company is asking for it, especially because you can buy an XK 150 coupe (from which the Royale takes many styling cues) for the same amount, or an XJ-S 3.6 coupe for a tenth of that. But, while those cars are beautiful, they were also mass-produced; arrive at any Jaguar event in either and you won’t be alone. The Royale, by comparison, is a one off, and the Jaguar that might have been.

“It’s not totally outlandish (like the French were doing at the time), but a touch more reserved”