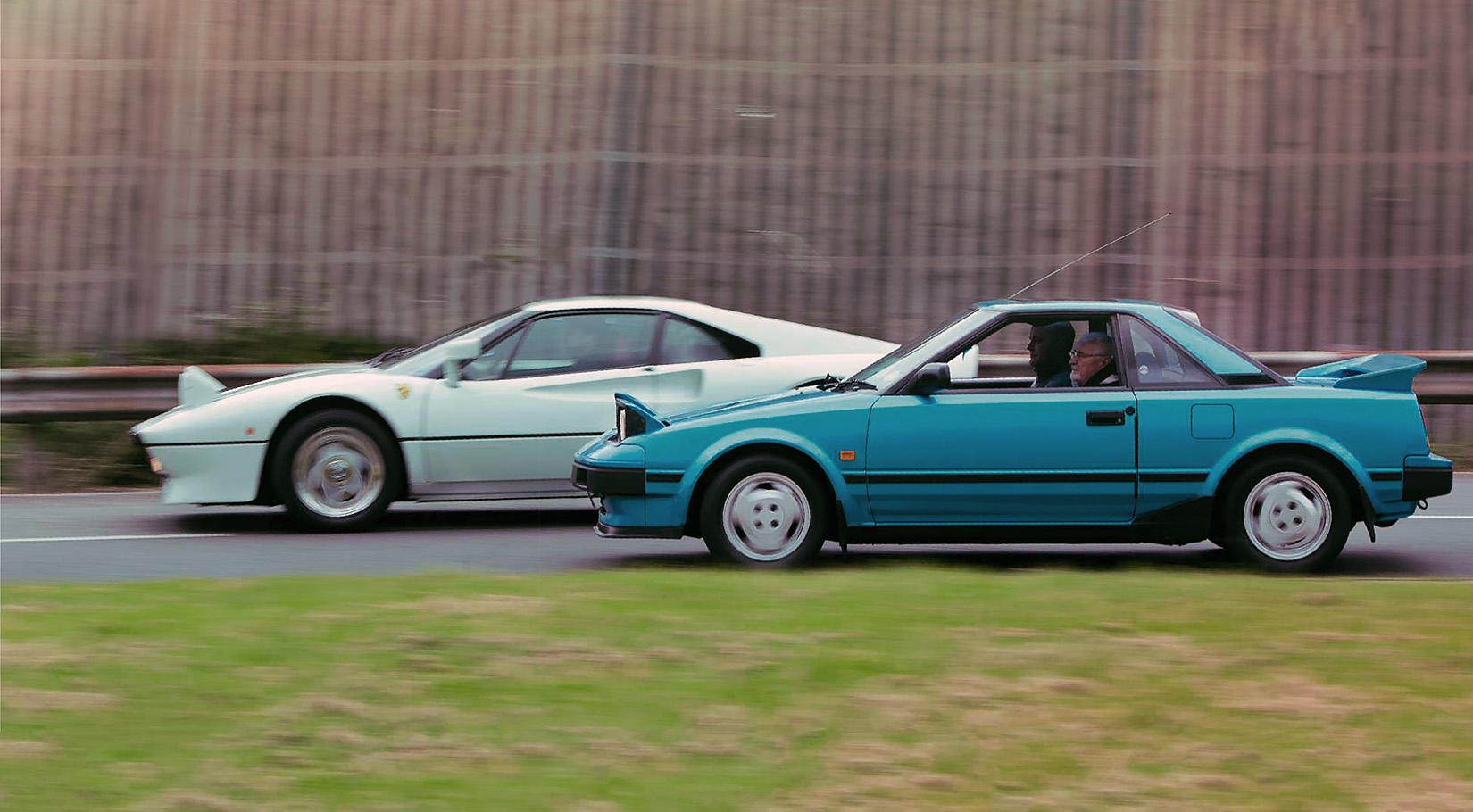 Toyota MR2 Test-Drive. Popular opinion has it that the hot hatch killed the sports car in the Eighties, but the Toyota MR2 not only proved that there was a healthy worldwide appetite for rear-drive two-seaters, it also did so in a way that genuinely ruined its rivals’ fortunes.

In order to understand how revolutionary the MR2 was, you’ve got to think back to the desolate sports-car wasteland of the very early Eighties. All the traditional British contenders were dead, and their coachbuilt Italian rivals were outdated and maintenance intensive. Then Reliant bravely stepped in with the Scimitar SSI, and Panther and Ginetta rebodied the Solo and G25. They may have been shoddy glassfibre wedges with Ford Fiesta dashboards and asthmatic hatchback engines, but they offered pinpricks of light in the gloom, a sense that things were about to change.

Unfortunately for the plastic Brits, Toyota felt that need for excitement too, and in 1983 fired a brace of warning-shot concepts on the international motor show circuit – Sumio Ono’s flush-glazed, computer-controlled FX-1, which offered a glimpse of a future Celica; and Akio Yoshida’s mid-engined ‘commuter sports car’, the SV-3. The motoring press nodded appreciatively, but assumed Toyota would concentrate on churning out millions of Corollas for motorists who appreciated reliability above all else. Then Road & Track spotted an SV-3 undergoing endurance-testing in Death Valley. Yoshida’s team had been hard at work since 1979 co-operating with

Lotus – thanks to a deal brokered by Colin Chapman – to help Toyota create a new generation of sporty cars to banish its tedious image. In return, Lotus got a high-quality, low-cost parts bin to raid when building the new Excel and Esprit S3. After 1984, when Roger Becker had flown to Japan to set up the suspension, the car emerged in the world’s showrooms as the MR2.

It only takes a few seconds behind the wheel of an MR2 like this one – built just six days after the start of production – to realise just how devastated Reliant, Ginetta and Panther must have felt. The MR2 may be mass-produced, but everything feels specially designed and of high quality, from the substantial steel bodywork to the bespoke switchgear and stealth-bomber instrument cluster complete with short-travel, joystick-shaped gearlever.

The twin-cam engine fires eagerly and idles with a fizziness that the SSI’s carburettor-fed Ford CVH could only dream of. The Toyota 4A-GE engine delivers its peak power high in its rev range – in this case 6600rpm – and beyond 4100rpm when the butterfly valves of its Twin Venturi Induction System are fully open, produces a metallic shrieking akin to a Formula Three racer hurtling through a steel-lined tunnel. No surprise, really – Novamotor- tuned Toyota twin-cams dominated the F3 grid in the early Eighties.

The pedals and unassisted steering wheel both feel saloon-car light. This doesn’t come at the expense of feel, because the car squirrels slightly under braking and writhes through tight hairpins. The MR2 may have been designed for the whole world, but its slide-happy 185/60 SR14 Bridgestone Potenza tyres betray the Japanese passion for drifting.

Storm into a corner and although initial turn-in is sharp and immediate, it’ll quickly offer a whiff of understeer, letting you know that oversteer will follow unless you ease off. Keep your foot down, though, and the ensuing drift can easily be controlled by steering on the frisky, immediate throttle. It’ll catch out unwary motorists used to front-wheel drive but it’s highly entertaining when you know to expect it, endowing the MR2 with an ability to misbehave in a friendly, controlled, legal manner similar to an Austin-Healey Sprite.

There are further parallels. The Sprite emerged in the aftermath of economic desperation, and used the might of mass-production to steamroller the British low-volume specialist sector, as did the MR2. The Sprite also used specially designed combustion chambers and low-drag-style bodywork informed by glamorous Le Mans racers, whereas the MR2 employs racing induction technology feeding a mid-mounted engine in bodywork inspired by supercars – the Ferrari Mondial and Lotus Turbo Esprit in particular.

Both also served as gateway drugs to the world of hardcore sports cars – legions of MR2 drivers helped to fuel the Nineties track-day boom, buying Lotus Elises and Caterham Sevens in the way that former Sprite owners made a beeline to Triumph and Jaguar showrooms in the Sixties.

The MR2 was ultimately outsold by hot hatches, but it proved beyond all doubt that there was still virtue in a small sports car with two seats and rear-wheel drive at a time when the concept was in danger of fading into complete obscurity. It’s every bit as important both culturally and industrially as the postwar British sports cars that now form the mainstay of the classic car world.

This car was built six days after the start of production,’ says Gary. ‘Despite its mint condition, I got it on eBay for £600 – some people don’t know what they’re selling. It’s one of just two in the UK in this colour. Lots of little things were changed early on – the round console in the door, for example, and some switchgear. Parts are generally easy to find but those items would be impossible.

‘There’s a lot of confusion in the classic car world concerning the MR2 Mkl. To some it’s just an old used car, not worth saving if it’s rusty, but it’s prized by others. Let’s hope they end up in the right hands while there are still enough of them around: they’re too much fun to be treated like museum pieces.’