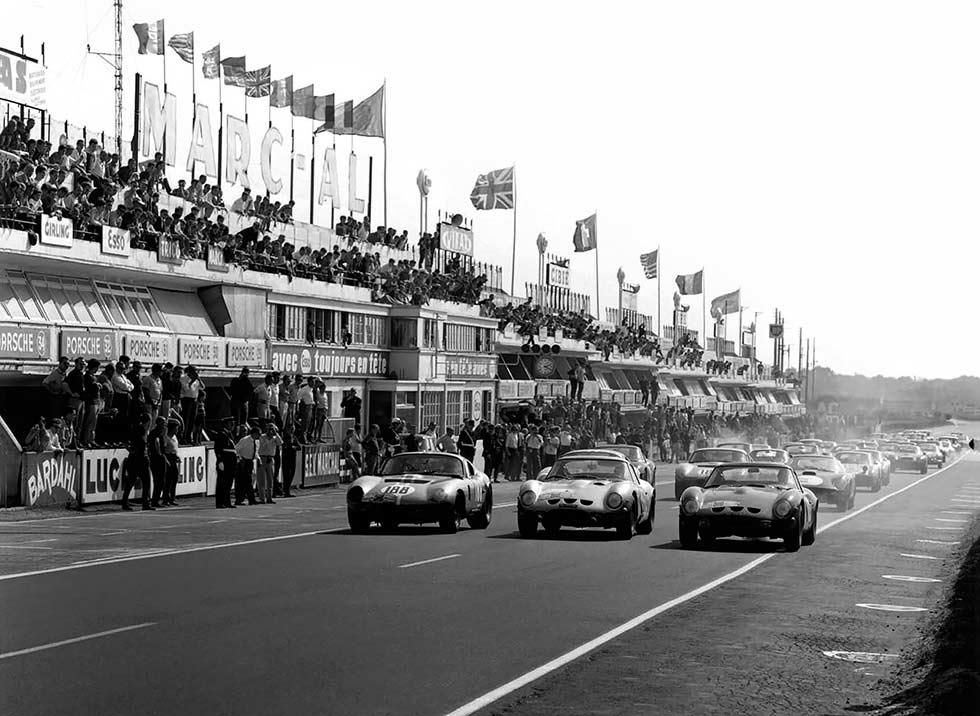 First held in 1899, when it was won by René de Knyff on a Panhard et Levassor, the Tour de France really started to capture the public’s imagination following WW2. Aces such as Stirling Moss, Phil Hill, Olivier Gendebien, ‘Fon’ de Portago, Lucien Bianchi, Jean-Pierre Beltoise and Jean-Pierre Jabouille all took part in the event, which was described in 1954 by one correspondent as ‘epic’ and ‘dynamite’.

Take, for example, the 1957 itinerary: it lasted six days, the route comprised 3418 road miles, and there were races at Pau (10 laps), Le Mans (eight), Rouen-les-Essarts (17), Montlhéry (10), St Étienne (one standing-start lap against the clock) and Reims (24). Then there were the hillclimbs at La Turbie, Mont Ventoux, Tourmalet and Mont Revard. Competitors travelled from Nice on the Mediterranean coast across to Pau, before turning north to Rennes and then over to the Belgian border at Roubaix. From there, they went south through Vichy, then back up to Strasbourg and the finish at Reims.

As The Autocar once put it, it was like running three RAC Rallies consecutively, with one night’s rest, and tests at Silverstone, Shelsley and Prescott then a race around Brighton seafront. With good prize money on offer, however, those big names were happy to take on the challenge over the following years. In the early 1950s, Osca and Gordini had done battle for outright honours, but from 1956 Ferrari won the GT category for nine years in succession.

When the Tour returned in 1969 after a five-year break, some of the cars were spectacular but wholly unsuited to road mileage. In 1971, Gérard Larrousse won in a Matra MS650; Jabouille was second in a Ferrari 512M!

As the decade progressed, rally machinery came to the fore. Bernard Darniche won it four times in a Lancia Stratos, and Jean Ragnotti twice in a Renault 5. In its later years, in fact, the fixture had became part of the European Rally Championship, and the final pukka Tour de France was held in 1986.The varied nature of both the cars taking part and the tests that they faced made it a unique event.

In the hot seat

In 1957, Stirling Moss was joined on the Tour de France by Peter Garnier, sport editor of The Autocar. They didn’t get off to a great start: their recce of the hillclimb at La Turbie – conducted ‘at a very reasonable speed’ – was interrupted by the gendarmes, who clearly disagreed and fined them Ffr2700.

When they did the run for real, Garnier found it ‘difficult not to be distracted by Stirling’s masterly performance. He flipped the car into slides, caught it, corrected it, drifted it and did goodness knows what else with it.’

Garnier’s own responsibilities were administrative and navigational: ‘If we were to arrive at a single control a few seconds late, it would have meant we were out of the running once and for all. I sat, therefore, studying the maps through a map-reader while Stirling chided and said that it was quite unnecessary – eventually referring to me as “my man Cyclops”.’

Moss’ popularity brought with it added complications: ‘At each control, the Mercedes was surrounded by people as soon as it came to rest, making it almost impossible to open the gullwing doors and climb out. We would pull up and try to spot the control before the view from the car windows became obscured.’

The pair got 13 hours’ sleep after the race at Le Mans – a rare break in the schedule – before competing at Rouen then heading to Roubaix: ‘We were beginning to grow accustomed to the transition from day to night, the fading light, and the prospect of another night on the road.’

Although Garnier drove while Moss slept – he’s pictured below during the wait to tackle MontVentoux – the British ace was not a great passenger: ‘We drove down a succession of lacets…On one of them, the tail slid wide. A quiet voice enquired: “Are we behind schedule?” I said that we weren’t. “Why, then,” said the voice from the pillow, “are we going so fast?” They survived the adventure to finish fourth overall. 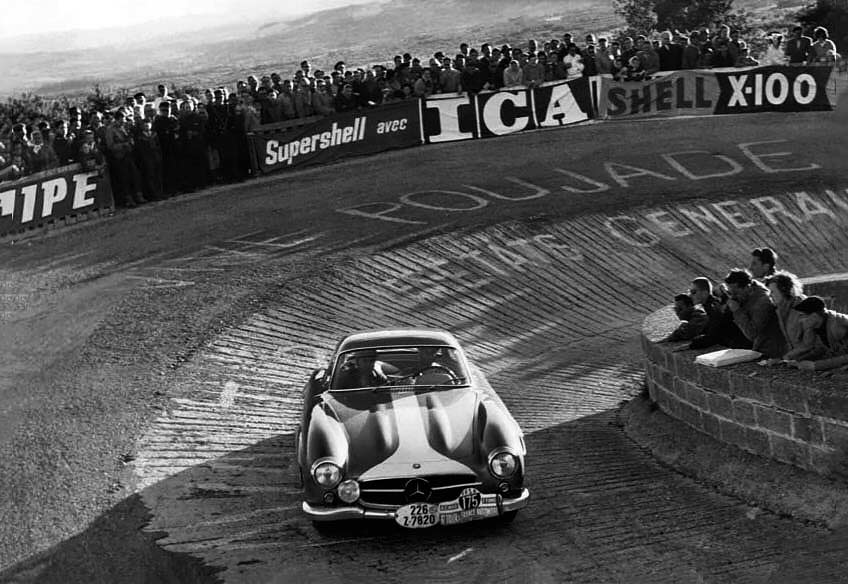 Above: not even Stirling Moss – here tackling Mont Ventoux – could prevent a Ferrari 1-2-3 in 1957 (see panel). Right: Bob Bondurant waits for the start of the circuit race at Reims in his Shelby Daytona Coupe, 1964.

Below, from top: the battered Ferrari of eventual winner Willy Mairesse waits in Eaux Bonnes to climb the Col d’Aubisque, 1960; Peter and Graham Whitehead didn’t make the finish in ’57 aboard their Jaguar. 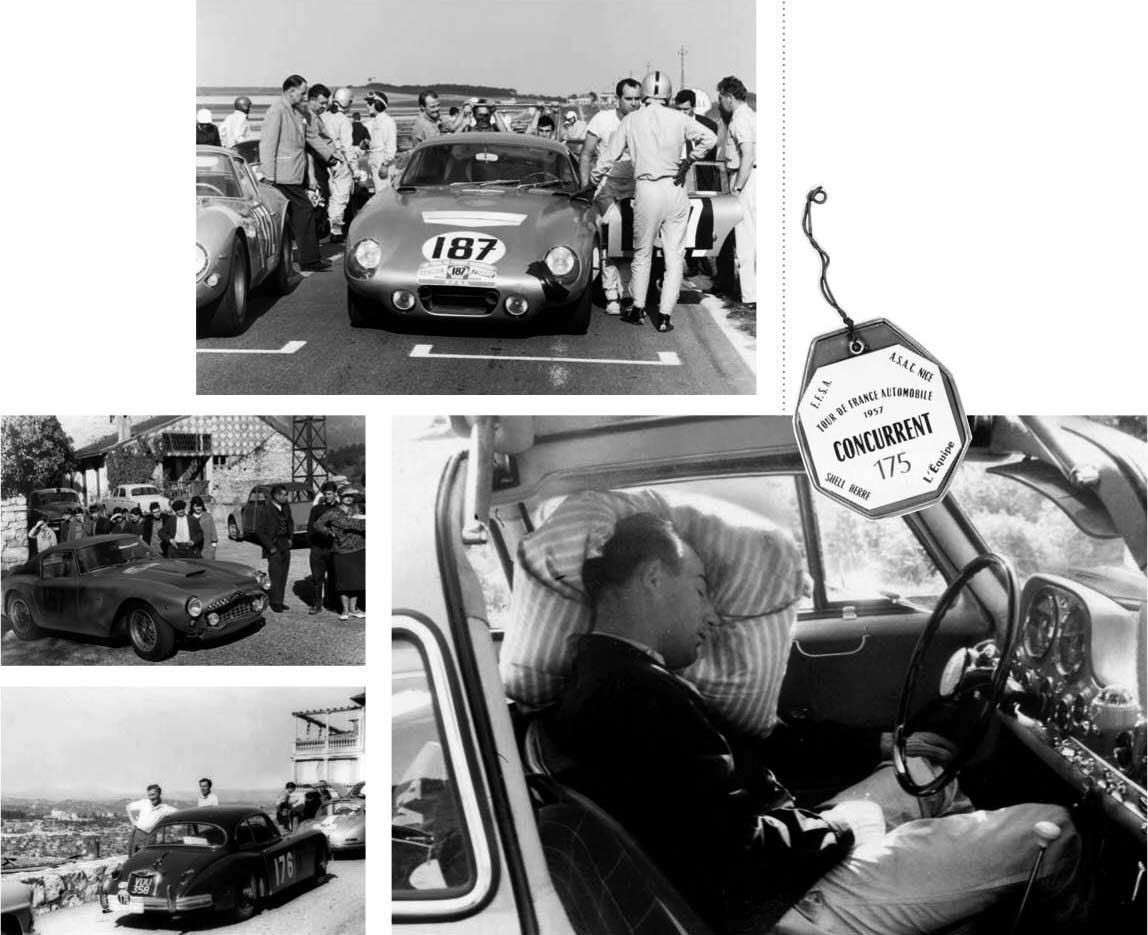 Five years after the last Tour de France, it was revived as an event for historics and is now organised by Peter Auto. The 2016 Tour Auto marked its 25th running, and comprised a 2000km route from Paris’ Grand Palais (below) to Cannes. In keeping with the original Tour, the five-day event featured road sections plus circuit tests – visiting Dijon, Bresse, Lédenon and Paul Ricard – with competitors split into classes for Regularity (maintaining an average speed) and Competition (going as fast as you can). Jean-Pierre Lajournade saw off a fierce challenge from Ludovic Caron’s Cobra to take victory in the latter in his Jaguar E-type, while Martin Sucari claimed the former in his 250GT.

Many of the cars ran in the event in period. Adrian Beecroft, for example, entered the Ferrari 250GT in which Willy Mairesse won the 1960 Tour, but everything from Ligier JS2, GT40 and 911 RSR to Abarth 750 and Osca MT4 was represented. Famous names included Jochen Mass, Jürgen Barth and Guy Fréquelin, with Anthony Beltoise – son of Jean-Pierre – taking the wheel of a Chevrolet Corvette. 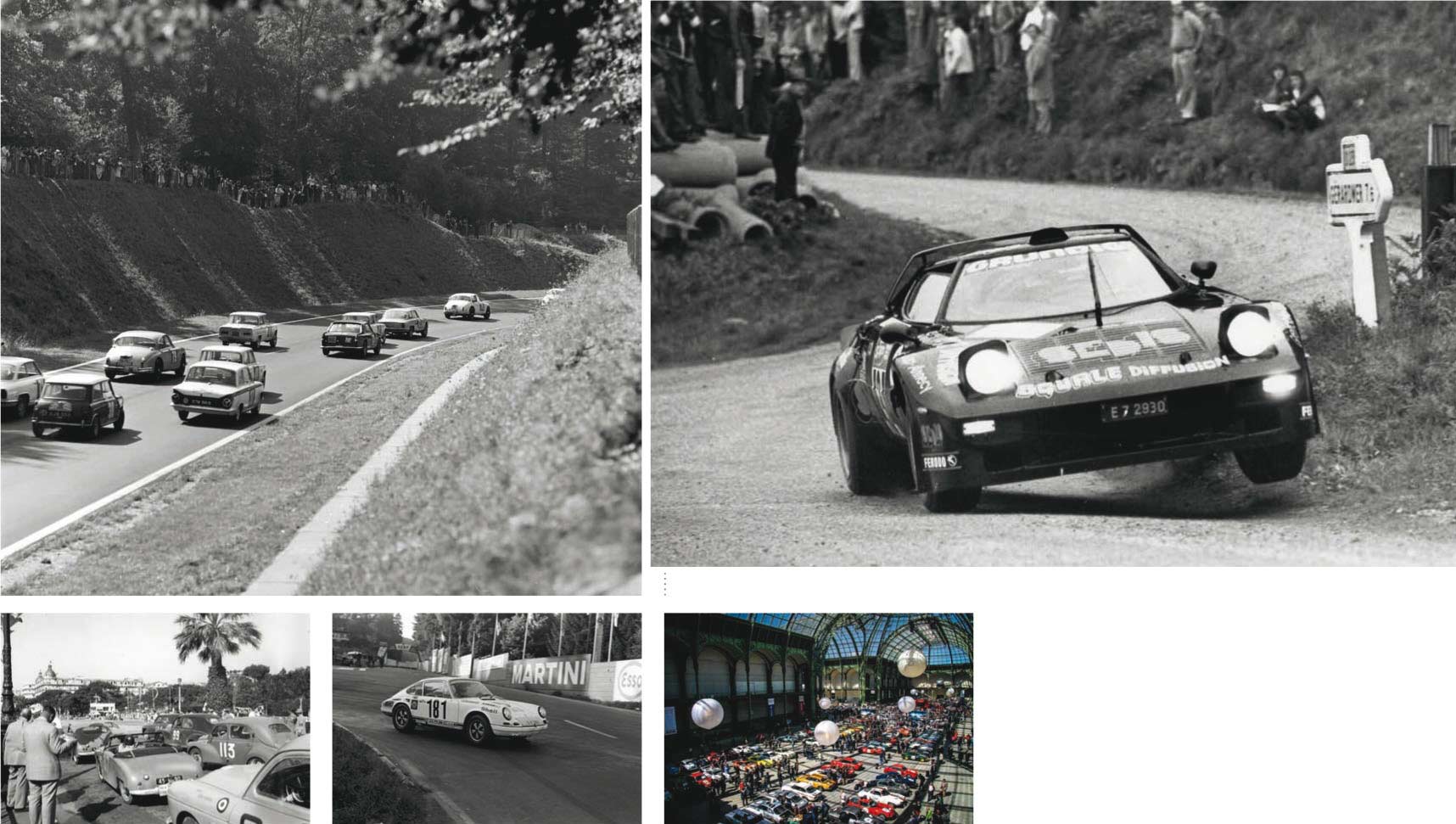 From top: an eclectic grid heads into Rouen’s first corner, 1964; awaiting the start of a test in Nice, 1953; the Tour ventured into Belgium, too – 1969 winner Gérard Larrousse is pictured at Spa; Bruno Saby trying hard in 1976 aboard the Lancia Stratos in which Bernard Darniche had won the ’1975 Tour.