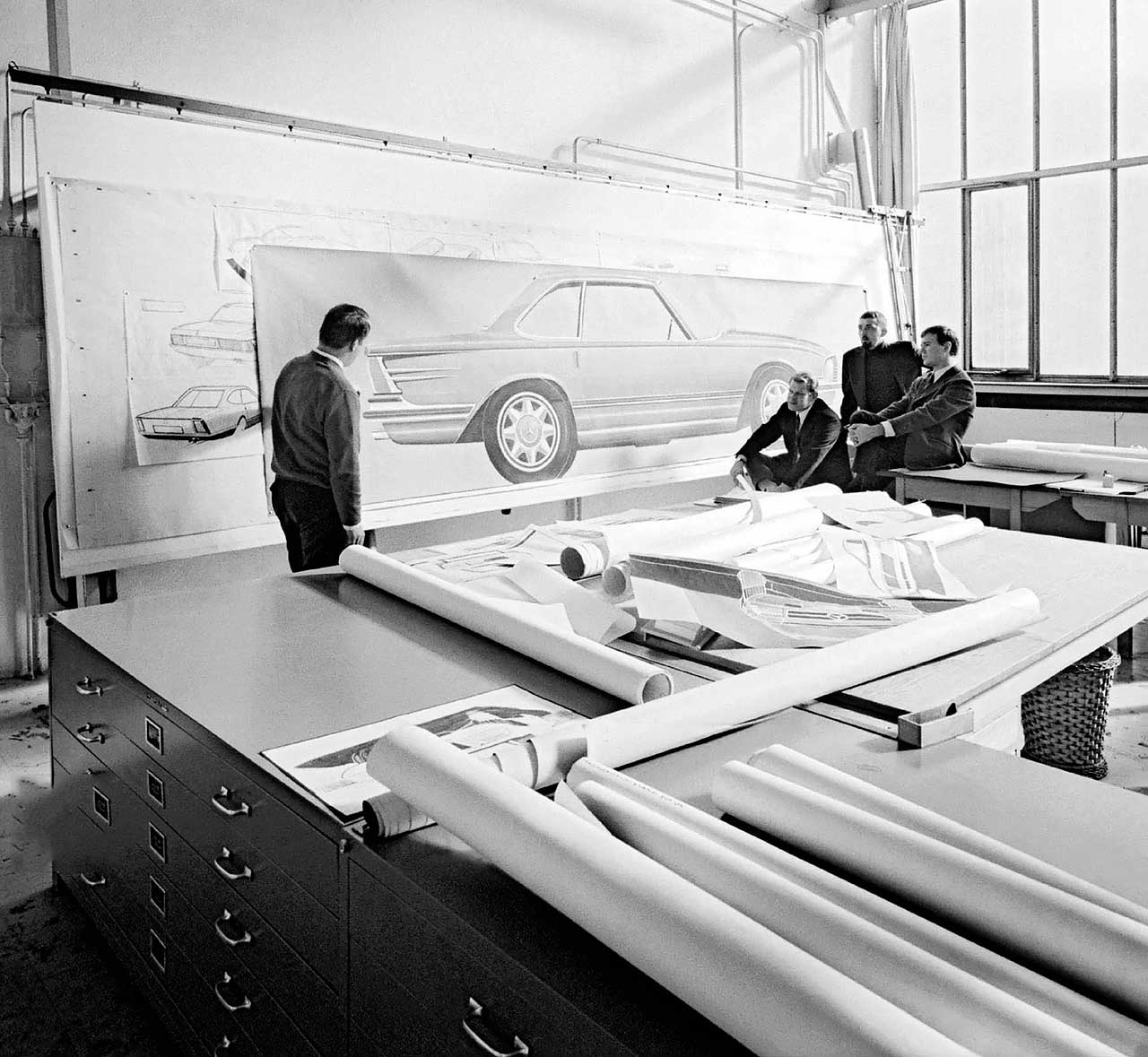 Tom Tjaarda on the concepts. The concepts grand designs. Car design legend Tom Tjaarda casts his eyes over the stylists’ original plans to see which ones made it to production most successfully.

Bruno Sacco’s early ideas for the Mercedes-Benz R107 SL was more flamboyant and reminiscent of the Triumph TR4.

Bruno Sacco’s R107 coupé design has a clean and elegant lower body design, in contrast to the elaborate styling of the roof rear quarter area. The roof immediately draws your attention and becomes the focal point of the overall styling. The thickness of the chrome mouldings that border the side louvres is an unusual touch seen on few European cars – it’s something I’d expect on a styling exercise for an American manufacturer. They’re a bit overstated but are done with good taste and give the car personality.

The production car’s removable hardtop is more refined and understated than the concept and perhaps more in tune with the overall styling of the lower body. Both of these roof proposals work and each enhances the overall design of the lower body, which is a bit too simple – it needed something to set it apart. You can see from the original design sketches of the removable hardtop that a different approach was taken, first of all replacing the fake louvres with a window. Then there is the lower metal area that supports the rear window and attaches to the body, giving the impression of substance and strength. From the very first sketch to mock-up and on to the final design, it seems that the designers had a clear idea as to what they were creating. Everything else was detail.

The Jaguar XJ-S is a difficult car to pass judgement on. Certain design themes were established from the very first scale model and faithfully carried through to the production run with a few refinements. To me, though, this is a car that must be observed driving down a highway to understand its stylistic impact.

The rear quarter panel that swoops down into the tail-light cluster on the coupé could look a bit more subtle – in the final execution it’s too slab-like. Also the rear window is too rounded and looks a little out of place within the angular overall theme. It would take no more than a few centimetres here and there to make it right, though.

The first production-ready prototype was the best, since immediately after 1972 safety regulations came to prominence and wreaked havoc with traditional car stylists. Bumpers suddenly became huge black masses that had to be incorporated somehow into existing body designs – integrated bumpers had yet to catch up with production technology. The production XJ-S suffered from ugly bumpers and Jaguar made several attempts to redesign this aspect but never achieved a convincing solution. The interior was rich and elegant in the British tradition with just enough space for four people, and personally I would just leave that exactly the way it is.

Robert Sinclair was president of Saab America in the early Eighties and thought a convertible 900 might increase sales. At the time there was only one place in Detroit that could realise a project like this – the American Sunroof Company, owned by German emigré Heinz Prechter. ASC built a prototype and tooled up for production but underestimated demand after the concept was shown at the 1983 Frankfurt Motor Show, and couldn’t keep up with orders.

Saab later increased capacity by using the Finnish Valmet plant. While I was working for Rayton-Fissore, Sinclair asked me to design a 900 coupé styling prototype – called the Viking – which was shown at the Turin Auto Salon and Los Angeles show in 1983. I found him very open-minded and receptive to innovative ideas. The convertible design in my opinion was an improvement on the basic sedan, which had a rather bulky roof and rear quarter pillar. It’s a shame that Saab was eventually destined to use less expensive platforms when General Motors bought the company, but the fact the convertible was produced up to 1992 at Valmet on the original platform just shows what a strong design it was.

This Pininfarina design presents another unusual story regarding its conception. It’s a typically clean and well-proportioned Italian design and I was curious who was responsible for this beauty. I was at Pininfarina at the time and remember the prototype being built, but couldn’t remember who did the actual design work. A call to my friend and famous Pininfarina designer Aldo Brovarone – now 90 years old – quickly got my answer. The prototype was conceived by purely practical methods – that is, by cutting the existing body off a 504 saloon and building up a wooden structure over the platform, establishing height and simple, basic lines until the buck took a certain form, then refining it. Sir William Lyons used the same approach when he designed Jaguars. This part I do remember well because both engineer Renzo Carli and Sergio Pininfarina would go to the workshop during their lunch breaks and guide the work on the 504 convertible using ideas they found in numerous sketches and line drawings – hence its visual similarity to other Pininfarina cars of the period.

This car is a simple design and not really ground-breaking, but conceived with grace, elegance and pleasant proportions. The only unusual line is the dip in the bootlid, which was employed for aerodynamic reasons.

Many Pininfarina designs of the time were completed using this method. For example, the Ferrari 275 GTB was designed by a panel-beater working at the Scaglietti Modena bodyshop and later approved by both Enzo Ferrari and Pininfarina.

Giovanni Michelotti was something of a cult figure among designers. He always worked freelance and was credited with designing 40 prototypes for the 1956 Torino Auto Show alone. Many of his design themes and sketches became full-size running prototypes with very little alteration. He would present a perspective front- and rear-view rendering to his client, and if approved would sometimes work all night making the full-size loftings to construct the wooden bucks. He had his own workshop where he hammered out the metal bodywork, designed the interiors and painted the finished prototypes. The Triumph Stag was the result of this process, with the sketch approved and the model built exactly according to what Triumph saw on paper, with only a few tweaks here and there. It’s an elegant and well-proportioned design, which later had to employ a B-pillar roll-bar to comply with the new American rollover safety regulations. I find the Stag’s removable hardtop heavy and cumbersome, though – I doubt two people could easily remove it.