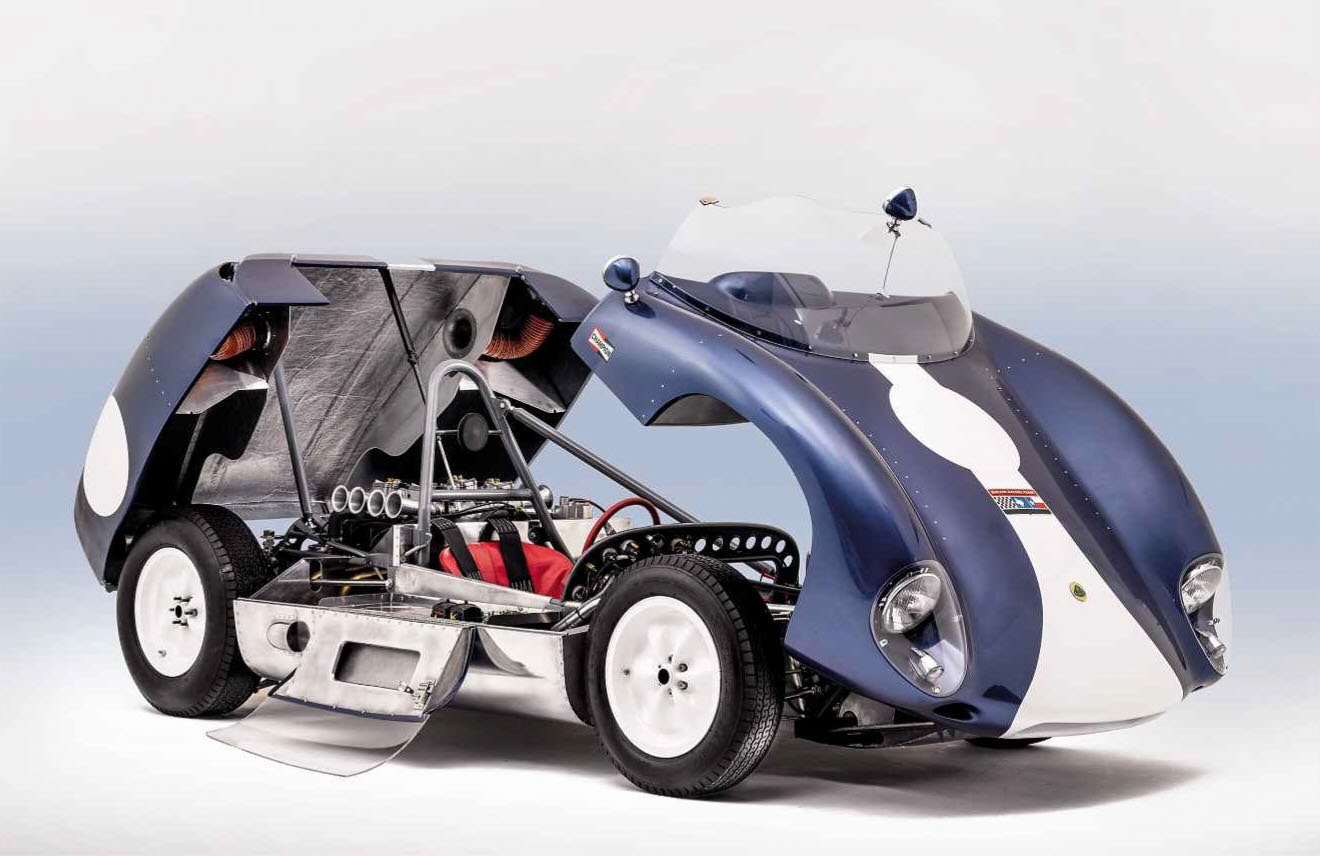 Highs and lows of recreating an FIA-approved car Lotus 19. Until as recently as 2012, this Lotus sports car recreation was a box of bits. Now it’s back on track after a meticulous 12-month restoration that earned it FIA papers. Words Rob Scorah. Photography Tolman Motorsport, Rob Scorah.

Know what you’re getting into’ would be sound advice to anyone taking on a classic car rebuild – especially if it’s a racer. But if anyone was fit to judge the dismantled Lotus 19 being offered from the estate of racing driver Roy Lane, it was surely Christopher Ross.

Ross is a Lotus man through and through, with a history of racing Elans and Elites as well as single-seaters back in the 1980s and ’90s. ‘The passion goes back a long time,’ he admits. ‘I’ve always found them exciting sports cars – they were fast and handled well.’ He was a great admirer of Chapman’s ingenuity and even co-wrote a book on Elans with Paul Robinshaw. ‘As an engineer myself,’ he explains, ‘I like the way Chapman “cheated” geometry and physics. Components often had to do two or three jobs.’

Judging from the several boxes of Lotus 19 parts, it looked as though Ross would have two or three jobs of his own to do over the coming months.

The car was actually a replica, the chassis having been built by Ken Nichols in Devon. It had been acquired by Lane, the four-times British Hillclimb Champion, with the idea of reproducing one of Lotus’s lesser-known sports racers and using it for hillclimbs. Lane had shown his worth in machines such as the Brabham BT21 and McRae GM1, usually with relatively heavy V8 iron in the back. As with those cars, he had sourced a trusty and ubiquitous American V8, in this case mated to a Hewland transaxle. Most of the important suspension parts were present and there was also some reproduction bodywork.

Ross now thought carefully about who would do the rebuild. He chose Tolman Motorsport for the job.

‘I saw the work they’d done – some beautiful Lotus Elites. They also made parts,’ he explains. ‘Their work was excellent and they had lots of racing experience. I liked their attitude; they never said no.’

Chris Tolman and his team have experience in aviation engineering as well as racing campaigns with top-flight teams such as Prodrive and Mitsubishi’s World Rally Championship-winning team of 2000. It would be Tolman’s job to produce an accurate and raceworthy car, as well as proving to the FIA that the machine they had created was indeed period-correct.

‘We involved the FIA from a very early stage,’ explains Ross. ‘They said, “You can’t cherry-pick the parts you want – you must build a specific car.”

‘Also,’ adds Tolman, ‘it had to be a recreation of a car that raced internationally: not just Mallory Park or Bahamas Speed Week, but championship races.’ That might not be straightforward. Lotus only made 17 model 19s. Built between 1960 and 1962, its name ‘Monte-Carlo’ was a nod to the heavier-built Cooper Monaco. It was not exactly intended for championship racing, it was primarily for shorter events and circuits. So finding an example that would fit their V8 spec might not be so easy. But without the FIA’s stamp, the finished machine would be little more than an expensive kit car.

So began three months of intensive research and sorting of the components they had. But, despite travelling as far as Denmark, Chris Tolman only turned up a handful of examples, and scant evidence of the authenticity of the machine he was putting together. Plus, the car itself was throwing up issues of its own.

‘Aspects of the chassis were simply not exact enough to construct both an accurate replica and a competent racing car,’ observes Tolman. It was time to get technical and bring in some modem hardware.

Tolman measured the entire chassis with a FaroArm, a tool capable of making 3D inspections and dimensional analyses and turning them into data. It would also allow the team to ‘reverse engineer’ components once the information was collated. Peter Denty Racing had been very helpful in coming forward with original pictures and drawings of the 19, as well as some parts. So the builders now knew what it was supposed to look like. Tolman replicated the Lotus’s structure in CAD, and created a 3D model to find the extent of any discrepancies.

Also, Ross and Tolman had finally hit upon a ‘role model’ for their recreation in one of four machines that had been shipped (minus engine and transmission) to the States. Chassis 19-965, the last Lotus 19 built (followed only by the 289 Cobra-engined 19B ordered by Dan Gurney), had been delivered to John Mecom Racing, whose drivers were AJ Foyt, Augie Pabst and Walt Hansgen. Loaded with a 4.2-litre Oldsmobile engine, the car had run at Brands Hatch in 1964, driven by Hansgen, who put it on pole and led initially.

Everything was now in place to start the rebuild. The modelling had shown the front end castor to be totally wrong. Indeed, Chris Tolman thought the front end had probably come from a Lotus 23.

‘It was a case of two steps forward, one step back,’ he explains. ‘A lot of the original parts were wrong. We had to do a lot of development, going back and forth to the original drawings.’ In the end, the entire front of the chassis was replaced and the engine and transmission mounts modified. The bump steer was also adjusted in CAD. New body parts also had to be made – new doors were rolled using the original techniques.

With an eye to modem safety, Tolman installed rollover protection with a T45 roll hoop combining fore and aft location stressed correctly. In addition, the floor was not simply an alloy skin but a high-strength aircraft alloy, riveted and bonded along the bottom for greater safety. The fuel system again was custom designed, incorporating a one-off Tolman-designed ATL fuel cell; even the pipework has a classic influence, being all black and cloth-wrapped where appropriate.

The FIA demanded authenticity and said the engine couldn’t run as it was – it needed to be wet-sumped and use four Weber carburettors. The wet-sumping was rectifiable, but only after some considerable difficulty. The Buick engine was substituted for a period-authentic alloy Oldsmobile 4.2-litre V8 from John Eales at JE Developments. But, as initial tests revealed, this brought issues of its own: cooling and stopping. Time for some ad-hoc air hole drilling? Tolman thought not.

‘As far as the body was concerned, there was to be no hole cutting,’ he said. ‘Though obviously, in period, people did cut ducts very crudely, we wanted the pure aesthetic.’

But aesthetics weren’t the only concern – more troubling was that the car could not use a bigger radiator and brakes unless there was evidence of the period car doing the same. A dilemma; without the mods, the car would only last a few laps of any race; without the papers, it wouldn’t run at all.

A strangely fortuitous coincidence came to their aid. Ross’s friend John Wood, technical director at the RAC and former CEO of MIRA, happened to be looking over the car one day. ‘I’m sure I know that car,’ he frowned. ‘I think I’ve got pictures of it in the loft.’

Indeed he had – from its outing at Brands Hatch in 1964. Unfortunately for Mecom Racing, the Lotus crashed. Very fortunately for Ross and Tolman, one of the pictures showed the car in its forlorn state, wheels splayed. The bent suspension revealed several things: the car was running larger-than-standard brakes as well as a bigger radiator. With the FIA’s full approval, the Tolman Lotus was soon sporting a larger radiator and new brakes from BG Developments. In its new form, it was again ready for trials at Mallory Park.

In between classic racing specialist Simon Hadfield’s proper test laps, I had a quick go in the Tolman Lotus – just after the windshield had undergone an in-the-field resculpturing to cancel out some buffeting the drivers were experiencing.

As with all Lotuses, once you’re ensconced in the cockpit, you sense the petite delicacy of the machine, its compactness and the nearness of all the controls. And, even when you are trying to be all racing driver-ish and business-like, you can’t help noticing those incredibly seductive lines and the sheer cuteness of the thing. The car looks fantastic in its metallic Cadillac blue with the original-style Mecom decals, while the red Lotus steering wheel and the red leather seat offer a nod to the F1 cars of the period. 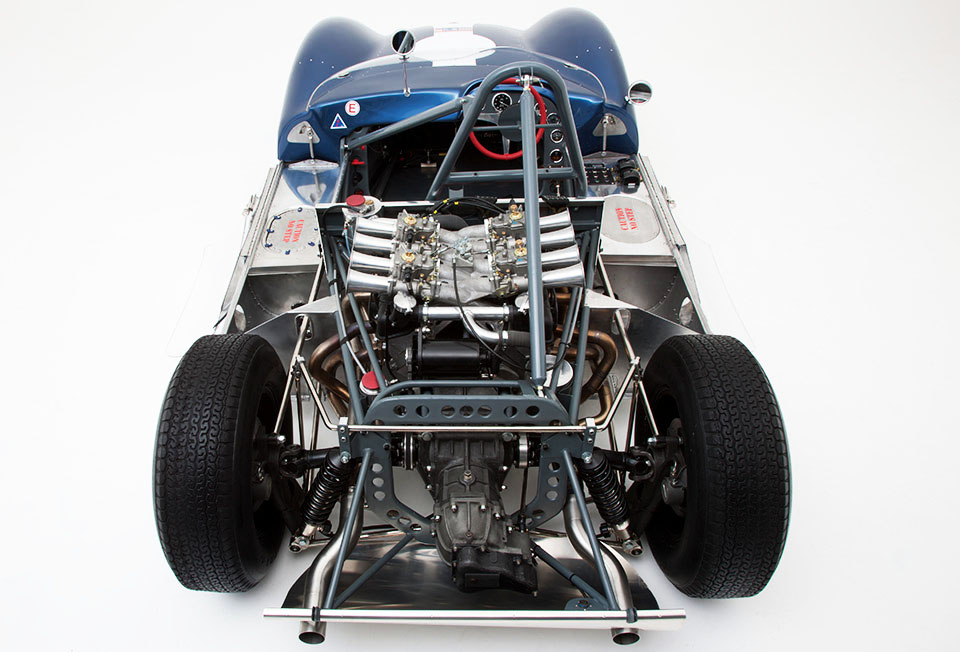 In someone else’s finished-the-day-before-yesterday toolroom replica, I didn’t think it wise to try proving oneself the King of Mallory, nor to see whether the 19 was capable of those four-wheel drifts you can pull in an Elan Sprint. But it would be interesting to feel how sticking a Yank V8 in the back would affect – or destroy – the legendary Lotus dragonfly deftness.

Chugging through the pit lane, the Olds V8 grumbled and popped and I began to wonder if one over- enthusiastic shove of the throttle would send the light frame, arse-first, off into the bushes or, more humiliatingly, into the pond in the infield.

Waved onto the track, we were immediately into the first corner, an intense growl coming from the rear, and, with Hadfield’s advice on gears and bends foremost in my mind, we gingerly built up speed through the long arc. One of the things that had struck me on the sighting lap (in a modern Maserati) had been Hadfield’s frugality of shifts in the 19 but now, out on the track and sitting what seemed like at least two feet lower, it all made sense. Detroit alloy V8, Norfolk design – and Tolman setup – were working perfectly together.

Below. Seductive lines benefit from a lack of holesdrilled in the bodywork – engine cooling issues were resolved by fitment of a larger radiator. 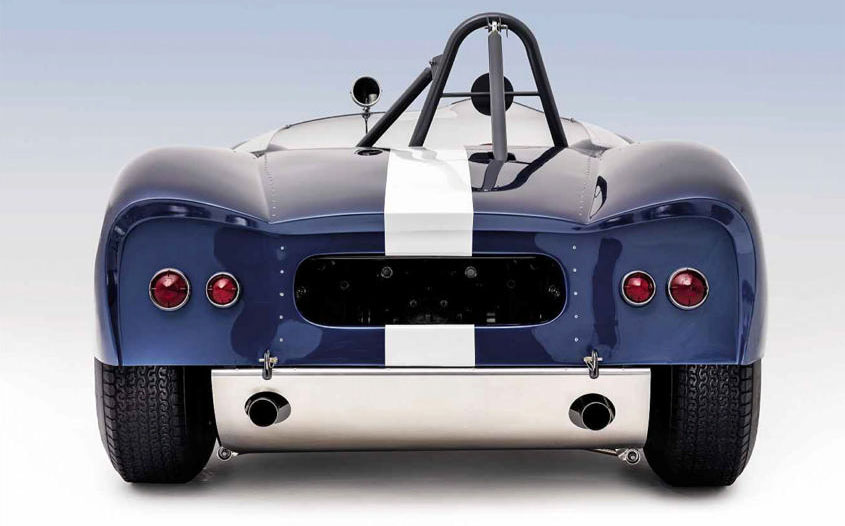 Clockwise from left Oldsmobile V8 runs four Weber carbs, as raced in period, to satisfy the FIA; entire front of the chassis had to be rebuilt; red leather steering wheel is a nod to Lotus F1 cars of the day. 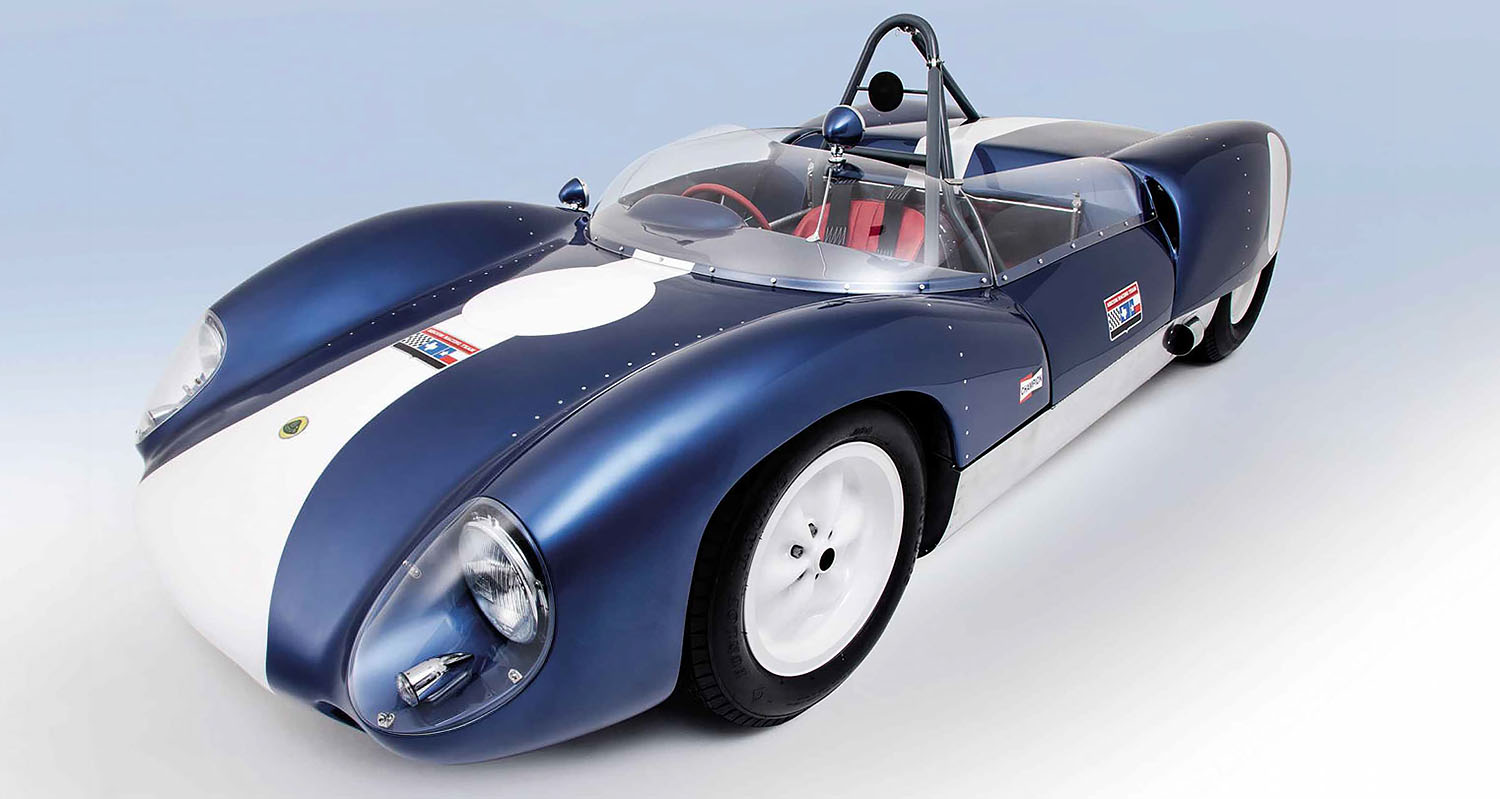 ‘WITHOUT THE FIA STAMP, IT WOULD BE LITTLE MORE THAN AN EXPENSIVE KIT CAR’