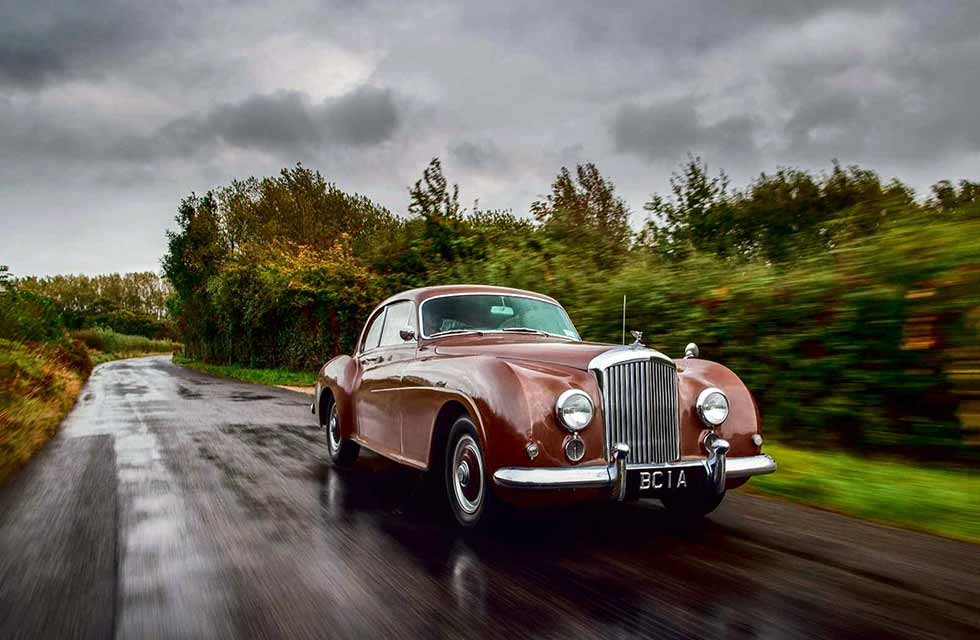 The very first production Bentley Continental Sports Saloon, chassis BC-1-A, has never been restored. By a miracle, it has survived its 67 years in incredibly original condition.

It’s the car you see here, the first of only 208 such Continentals ever made: chassis Number One. All it has received over the years is a paint blow-over and a re-trim. It has never been apart and has covered only 115,000 or so miles. It was delivered new to the Franco-Britannic dealership in Paris on 6 June 1952, following a special 393-mile test at MIRA proving grounds during which the rear springs’ poundage was altered to improve the handling. It was originally finished in Moss Green with an Antelope (brown) interior, a radio and a plain radiator without a bonnet mascot. The first owner was Ms André Simon, after which the Bentley went to America and was bought by Father Joseph Reagen from the famous Vintage Car Store in New York in 1959. However the Vintage Car Store’s proprietor, Ed Jurist, kept tabs on the Bentley, buying and selling it a couple of times until, in 1970, Eric Weissberg stopped in and bought it for $7500: quite a lot for a somewhat tired-looking, right-hand-drive, manual-gearbox car in Woodstock, New York.

Eric Weissberg is a successful session musician who played the Dueling Banjos instrumental in the film Deliverance and worked with stars such as Bob Dylan, Billy Joel and Talking Heads. He used the Bentley sparingly, driving it in the Woodstock and Hudson Valley area but never in winter. Three years after acquiring the Continental he had it repainted at the Earl Scheib paint shop for the specialoffer price of ‘Just $75’.

The catch was the limited colour range, so it ended up with the exterior finished in the former interior colour of Antelope. An excess of brown was remedied by having the cabin retrimmed in Cherrywood leather by Jetson Aircraft Interiors. Only in America… After that the Bentley was quietly enjoyed by Eric Weissberg for the next 45 years and slipped off the car collector radar.

So, how did the Continental series come about? To discover that, we need to go back to Bentley Motors’ first ownership change. Having won the Le Mans 24 Hours five times, in late 1930 WO Bentley decided to pull his works cars from endurance racing. The Wall Street Crash of 1929 and the Great Depression helped this decision but, worse, Bentley Boy Woolf Barnato’s diamond-mining wealth was starting to dry up. Come 1931, Bentley Motors Ltd had no choice but to call in the receiver.

‘WO’ thought that Napier would rush to his rescue but instead, in a rather unsavoury manoeuvre, a company called The British Central Equitable Trust won the sealed-bid sale with an offer of £125,000. This turned out to be a front for Rolls-Royce Limited, which was becoming increasingly concerned that Bentley’s ‘fast lorries’ were becoming so refined, especially with the 6½ Litre and 8 Litre cars, that they were starting to ‘out-Rolls- Royce’ Rolls-Royce itself. The owner and exrival duly sold off the Bentley factory at Cricklewood, and in 1933 it moved Bentley production to Crewe, where the new ‘ownerdriver’ Derby Bentley started production.

This car was a more sporting alternative to the rather staid Rolls-Royce 20/25 and soon became known as ‘the silent sports car’, a welcome addition to the portfolio of a firm that, at this time and leading up to the war, was becoming pre-eminent in engineering. Rolls- Royce’s spectacular Merlin aero engine drove the point home, and after the war its motor cars were regarded as some of the finest in the world. Bentley offered the more sporting models, launching its Mk VI in 1946 and, later, that car’s R Type successor.

The Bentley division continued with sports car development after the war, meeting the demands of customers who needed fast, longlegged machines for use on European roads and, in particular, the German autobahns. The seeds for this had been sown before the war. In 1938 Greek sportsman and ship owner André Embiricos ordered chassis number B-27-LE for special development with the collaboration of Walter Sleator, managing director of the Paris concessionaire Franco- Britannic Automobiles. It was based on a modified and uprated 4¼-litre Derby chassis, fitted with an overdrive MX gearbox and clad with wonderfully aerodynamic aluminium coachwork by designer Georges Paulin and Paris coachbuilder Portout et Cie.

To publicise this new high-speed Bentley, Walter Sleator took it for a record-breaking run across Europe in January 1939. He covered 182.5 miles in two hours, including a refuelling stop on the autobahn between Berlin and Hanover. During preparation for this, Captain George Eyston had made an officially timed run at Brooklands covering 114.66 miles in the hour. These great feats received wide coverage in the press, which referred to the car as the ‘Streamliner’ and the ‘Continental Bentley’.

After the war, seasoned ash wood framing was in short supply so HJ Mulliner, one of Bentley’s preferred coachbuilders, developed a lightweight bodywork construction system. Its craftsmen had visited Touring in Italy to look at the Superleggera method of construction, but were not impressed with the idea of attaching aluminium skins to steel tubing because it encourages corrosion. Mulliner instead approached the Reynolds Company, and together they developed aluminium extrusions that could be formed into complex shapes by Mulliner’s ‘vice shop’.

In 1951 Ivan Evernden, head of chassis design, formally submitted to the Rolls-Royce board his design proposal: ‘Corniche II, a new record-breaking saloon sports car’. The intention was to re-establish Bentley as the manufacturer of the world’s fastest four-seater sports saloon, one capable of covering 120 miles in the hour. Initial designs were finished by Evernden and chief stylist John Blatchley at Crewe, but the conservative board demanded a more upright and recognisable Bentley radiator shell, complete with a dummy radiator cap. Maybe a ‘flying B’ mascot, too.

Purist Blatchley had to toe the line, but soon a quarter-scale model of the new car was being tested in Rolls-Royce’s wind tunnel at the Hucknall Flight Test Establishment. Particular attention was paid to the rear wings, enabling the car to track straight at a simulated 120mph. Its drag co-efficient was measured at 0.388, lower than the Jaguar E-type’s a decade later.

When the first modified MkVI chassis was delivered to HJ Mulliner in 1951 – with its high-ratio back axle, close-ratio gearbox with overdrive top gear, a cold-air ram inlet and twin-extractor manifold coupled to an ‘acoustical’ exhaust system – it was clear that weight reduction had been high on the agenda. The entire bodywork and substructure were made of aluminium, as were the seat and window frames, the light clusters and the bumpers. Carpets, leather and glass were all ‘aero-grade’. The target was a slim, by Bentley standards, 3470lb (1700kg), about the weight of a new Porsche 911 Turbo 992.

The Corniche II was ready for testing on 24 August 1951. Fitted with Dunlop racing tyres, the prototype was dispatched to the Montlhéry Autodrome and recorded a top speed of 117.34mph at 3700rpm. For the high-speed runs the tyre pressures were increased to 50psi and the rear bumper and numberplate were removed, along with the undertray, the rear seat, the spare wheel and the tools. So was the radiator cooling fan, which gave an extra 3bhp. The stripped-out Bentley reached 119.75mph; finally Bentley had, near enough, its 120mph motor car. In 1951, this was a very big deal. The prototype Bentley was registered OLG 490 and soon became known as ‘Olga’, its fame spreading as one of the fastest cars on the road. It was Crewe’s general test vehicle as well as the press car and works demonstrator, and it was the official safety car at Le Mans from 1952 to 1958. When production began in January 1952, the model was officially known as the Bentley Continental Sports Saloon. It became the ‘R Type’ only after production ceased, to differentiate it from the later S1.

All original chassis numbers were prefixed by the letters BC, for ‘Bentley Continental’. They run consecutively, always omitting the number 13, in five alphabetical series, A to E. The prototype Olga, originally 9B-VI, was renumbered as BC-26-A when sold to its first private owner, Bentley Drivers’ Club president Stanley Sedgwick, in 1960. He was a man who knew a good Bentley when he drove one. TODAY, BC-1-A is lovingly ensconced in a warm barn deep in the Sussex countryside. This first production Continental looks very tidy and very original, so it’s no surprise to learn it has just won the ‘Best R Type Bentley’ trophy at the recent Salon Privé concours, host to the largest gathering of Bentleys ever.

It now belongs to Henry Pearman of Eagle E-types fame. His company spends around 4000 hours per car building the most highly developed E-types to 100-point concours condition. So why does Henry want an old brown 1950s Bentley?

‘I absolutely love original cars. At Eagle, we always do our best to preserve the few original E-types we are lucky enough to find, because originality is irreplaceable. After I left school I trained as a mechanic at Sargeants of Goudhurst, my local Rolls-Royce and Bentley service and restoration specialist, and I have a personal collection of Bentleys that includes an S1, S2 and S3. So this R Type Continental is a special addition. Car number one, and in such original condition… Yes, the paint job is a blow-over and the trim is a bit baggy, but it’s virtually original and I have no restoration plans for it. There’s no need.’

Henry is a perfectionist and a racing driver, but he also appreciates classic motor cars for what they are. He shows me around the Bentley. We note the French plate on the bulkhead, the French instructions on the oil filler cap, the lightweight bumpers on this first A Series car, which are some of the lightest. The veneered dashboard is the early type with lovely crossbanding, the full undertray is in place and there’s a one-shot chassis lubrication system. Henry has had the chassis gone through by the chaps at West Hoathly Garage, his Bentley specialist, who performed a deep service, rebuilt the front suspension and dampers and fitted fresh Avon Turbospeeds. Out on the lanes, Henry is clearly at home in BC-1-A. Fast but not furious, the elegant car is in its element. When it’s my turn behind the large, thin-rimmed Bakelite wheel, the Continental immediately feels special and expensively made. The right-hand, long-throw mechanical gearshift is beautifully weighted and can be operated with two fingers. The clutch is laughably light and the drum brakes, just the front ones servo-assisted, bite with enthusiasm. The exhaust note is subdued but rich as the smooth straight-six wafts the big coupé along without seeming to try.

The steering is a bit woolly around the straight-ahead but it sharpens up in corners. Sitting in the comfortable lightweight bucket seat I realise I’m almost at Range Rover height, and the ride is equally good. Tyre and wind roar are absent, the driving position is commanding, the long gearing adds relaxation to the torquey engine’s delivery and the Continental’s ride is akin to a magic carpet.

Thanks to Henry Pearman, www.eaglegb.com.