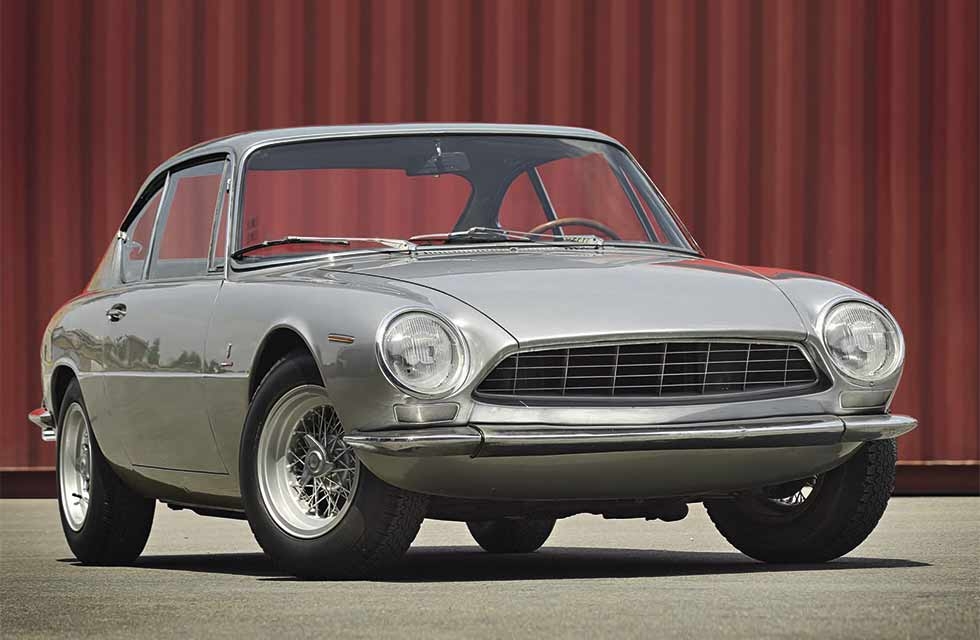 A coupé surrounded by mystery. It could be the title of the story of the Innocenti project 186 GT created between 1963 and 1964 which has been brought back to life only recently. Fifty-five years ago the magazine Auto Italiana briefly hinted at this car in its article ‘Innocenti 1750 with a Ferrari engine’. What was a journalistic scoop at the time, actually fell on deaf ears. There were to be no more lines in the press, although it was a juicy bit of news.

After assembling models for the English BMC group in 1960, Innocenti decided to expand its range by producing a small, prestigious GT. Ferdinando Innocenti was 72 years old, and had discussed his idea with Enzo Ferrari. Oronzio de Nora at ASA, however, was faster than Innocenti and in 1962 he established a plant in Milan, in Via Faustino, next to the Innocenti factory, to build his four-cylinder 1000cc ‘Ferrarina’ ASAs. Ferdinando Innocenti commissioned Ferrari to design a prototype which was never sent to production. This one-off, whose bodywork was styled by Bertone and featured here, is still in perfect shape. Ferdinando Innocenti’s enthusiasm soon cooled for two main reasons: firstly, his plant was not structured to manage a model in this class and secondly, Innocenti lacked a proper commercial network to effectively handle sales.

Ferdinando passed away in 1966. No official data was ever released on the Innocenti-Ferrari offspring. But Enzo Ferrari was an accurate man, and in the appendix of his memoirs ‘My Terrible Joys’ he made a list of all the engines produced at Maranello. The engine for this prototype was created in 1963. It is a 60-degree V6 with a displacement of 1787cc (bore 77mm x 64mm), a single overhead camshaft per bank and two valves per cylinder. Power is thought to be around 117bhp and the engine is fuelled by three-carburettors. The transmission, derived from English technology, has a manual four-speed gearbox with overdrive on third and fourth gears. There are four wheel disc brakes.

The cylinder head cam covers were similar to the Ferrari V12 engines of the same period and also the architecture, although cut down to half size, was almost the same. The engine configuration was not totally new. The 60° V6 single overhead camshaft family had started earlier in 1958, when the engineers were also developing a 65° Dino V6 with overhead camshafts. The extra five degrees between cylinder banks gave Ferrari the straight intakes he wanted. The engine was fitted to the 196 SP which took Lodovico Scarfiotti to win the European Mountain Championship in 1962. It was very similar to the power unit in the Innocenti prototype.

It was not difficult for Ferrari to design an engine for Innocenti, and the Maranello plant overlooked the whole project. Alessandro (Sandro) Colombo, born in 1924 and still very active today, was the technical director at Innocenti back in the 1960s and moved to the racing department at Maranello in the 1970s and recalls the developments during that period. “The car was entirely designed at Maranello, in the Via Trento and Trieste offices. Franco Rocchi studied the engine, Walter Salvarani engineered the transmission and Casali took care of the chassis. I followed the project personally with a few members of my team and we even spent some time at Modena to follow the project in situ. The project was top secret at all stages, because Ferrari was used to working this way, and would never allow any information to leak outside”. Two coupe prototypes under project name 186 GT were assembled. They were almost identical, apart from minor changes to the chassis. For practical reasons, in fact, the first prototype had a tubular frame which Bertone dressed up in aluminium. The second and final prototype had a monocoque body also carried out by Bertone, who was also to be entrusted with the car’s production. Sandro Colombo took care of the design personally with the aid of young Giorgio Giugiaro, (who was working for Bertone in those years before moving on to Ghia and to establishing his Italdesign later on), who penned the car’s lines. In the meantime, the first tests on the tubular chassis prototype started on the small circuit within the Innocenti factory, at Lambrate. But by the time the final concept was sent up to Milan, the project had already been abandoned and the first example had been destroyed. The surviving car ended up in a shed at Innocenti, where it sat until 1994 when the plant, which in the meantime had been acquired by Fiat in association with Alessandro de Tomaso, the then owner of Maserati, underwent demolition. Together with the 186, there was the archive of the Biturbo, whose body shells were built by Innocenti, and several other important papers.

Ermano Cozza, the custodian of Maserati’s archive, swooped in and managed to rescue everything from destruction. Cozza handed over the 186 GT to Ferrari and the car was shipped to Saima Avandero SpA’s large warehouse in Fornigione (Ferrari’s worldwide freight forwarder) and left in the care of Antonio Ghini, former communication director with Ferrari and now director of the Maranello and Modena museums. In January 2015, the car will be the star of a new exhibition hosted at the Ferrari Museum.

BELOW: While the origin of the engine is without doubt, the source for the chassis remains unknown. Could it possibly be MGB?

Ferdinando Innocenti started his company in 1920 and became well known as the post war manufacturer of Lambretta scooters.

From 1961 to 1976 Innocenti built the BMC Mini under licence and later the Allegro-based Regent. During this period the company became known as Leyland Innocenti and produced the Innocenti Spider (1961-1970) which was a rebodied version of the Austin-Healey MKII Sprite. Styled by Ghia the car was produced by OSI, near Milan.

In 1972 BLMC took overall control of the company and Innocenti enjoyed prosperity until BLMC ran out of money and was nationalised by the UK government. In 1975, the company was acquired by Alejandro de Tomaso to become reorganised under the name Nuova Innocenti. However, with the loss of the original Mini, production began to fall and was revitalised by the introduction of the new Bertone-bodied version of the Mini utilising Leyland’s 998cc and 1275cc engines. When the engine deal with Leyland ended, De Tomaso turned to Daihatsu of Japan who supplied 993cc three-cylinder units.

De Tomaso also used the Innocenti factory for final assembly of the Maserati Biturbo, Quattroporte and the Chrysler TC. Innocenti stopped building its own cars in 1992.

When Fiat took Innocenti over in 1990 the factory dealt with the Fiat 127-based Zastava Yugo Koral and Brazilian-imported versions of the Fiat Uno called the Elba station wagon and Uno Mille. The marque ended when sales of these rebadged models ended in 1996.