Tech secrets of the Koenigsegg Gemera 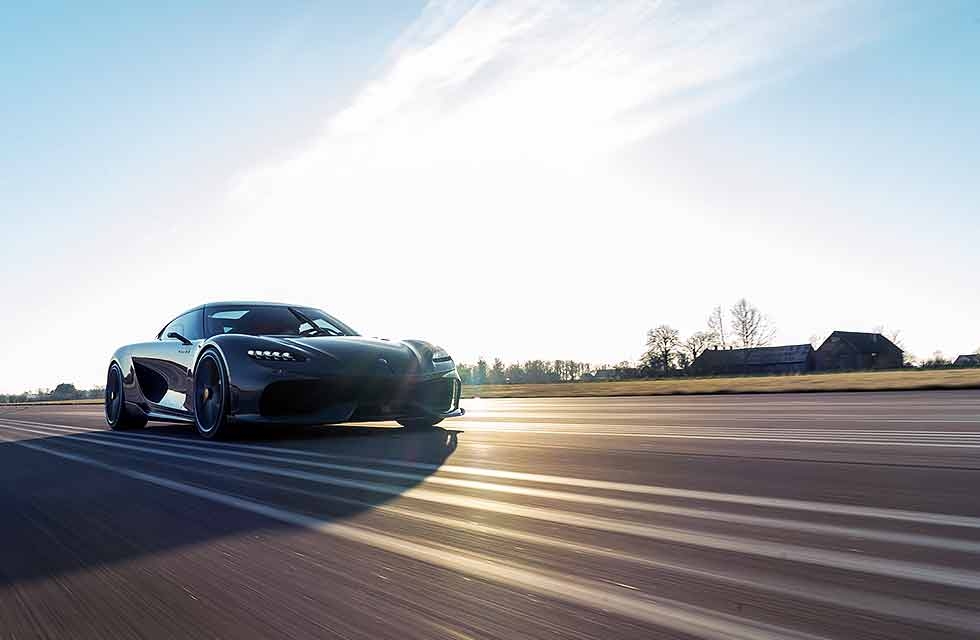 Koenigsegg’s groundbreaking Gemera. It came from the future/Sweden Koenigsegg is at it again. After the gearboxless Regera comes the wickedly weird Gemera, a four-seat GT so outside the box it isn’t aware the box even exists. By Ben Miller.

THE INNOVATIONS TRANSFORMING OUR DRIVING WORLD

Koenigsegg is different. The universe thought it had Christian von Koenigsegg’s team conveniently pigeon-holed as makers of wildly expensive, wildly fast hypercars – a Scandinavian Pagani, if you will. Then Koenigsegg dropped a hybrid GT, the Regera. It was still a wildly fast mid-engined V8 but it was also a gearbox-less hybrid – albeit a hybrid on Koenigsegg’s terms.

The Gemera, Koenigsegg’s new four-seat ‘Mega-GT’, is surely the most radical production hybrid the world has yet seen

The Regera was, like everything Koenigsegg does, a product of founder Christian’s restless and fertile mind. A Tesla fan, he wanted the visceral thump of a performance EV melded with the sensory drama of a high-performance V8. A hybrid, then, but not one a Prius enthusiast would recognise; not a traditional hybrid. Because Christian isn’t a fan of those: ‘Normal hybrid stuff tends to be clumsy and heavy.’

Nor is he a fan of gearboxes. ‘You’re only using one ratio at a time; the rest is just heavy metal ballast at the back of the car.’ Electrification presented Koenigsegg with the opportunity to eliminate the gearbox. When you’ve more torque than a tank, you don’t need a box full of ratios.

‘When the right [battery] cell technology, electric motor and inverter technology came along, I realised we could maintain our DNA but remove the gears and add excitement, functionality and efficiency – a hybrid but without the clumsy stuff,’ von Koenigsegg told CAR when we visited his Angelholm HQ.

Koenigsegg’s new four-seat ‘Mega-GT’, the Gemera, is an evolution of this thinking, and surely the most radical production hybrid the world has yet seen. The numbers take a while to sink in so let’s get straight into them. There is an engine but it’s tiny: a 2.0-litre triple (see panel, left). Its creators envisage it running on CO2-neatural biofuels but petrol will do. It has no camshafts, two turbos and makes 600bhp. Yep, 600bhp. That peak output (more than the new Audi RS6’s 4.0-litre twin-turbo V8) chimes in at 7500rpm, the thing will spin to 8500rpm and torque peaks at 443lb ft (the same as an Alfa Giulia Quadrifoglio’s 2.9-litre V6). Koenigsegg calls it the Tiny Friendly Giant, or TFG.

The TFG sits just ahead of the rear axle but actually has nothing to do with it. Instead, its output is augmented by a 396bhp crankshaft-mounted e-motor and punted to the front wheels via a propshaft, a hydraulic coupling and a pair of wet clutch packs. It’s this combination – potent petrol power and huge electric torque – together with Koenigsegg’s hydraulic driveline coupling that means the Gemera, like the Regera before it, doesn’t need a multi-ratio gearbox. Von Koenigsegg claims a three to five per cent efficiency improvement from the deletion of the gearbox, or a 30bhp gain given the triple’s 600bhp output.

The rear wheels get a 595bhp e-motor and reduction gearset each (opening up torque vectoring possibilities and, when you’re reversing into your clifftop Malibu mansion’s parking bay, a reverse ‘gear’). The car’s full complement of motors is wired to a 15kWh battery pack The net result is 1700bhp: a 1100bhp combined peak from the e-motors plus 600bhp from the engine. With all-wheel-drive traction and torque to shift planets on their axis, the 0-62mph sprint takes a blink-and-you’ll-miss-it 1.9sec.

The innovation doesn’t stop with the powertrain. The Gemera’s rigid carbon structure has enabled designer Sasha Selipanov to delete the B-pillars: all four occupants (each of whom gets two cupholders; one heated, one chilled) enter via the apertures created when the two huge doors (which also bite into the roof) rise via Koenigsegg’s trademark linkages. The exhausts, by Akrapovic, exit high on the rear bodywork, like a 918 Spyder. The chassis is as intelligent as the drivetrain, combining all-wheel drive with adjustable suspension, adjustable ride height, torque vectoring and rear-wheel steering. Cameras replace wing mirrors, their feed displayed on A-pillar screens in a big, airy interior dominated by big Tesla-esque touchscreens. And the whole lot’s wrapped in bodywork that is, by Koenigsegg’s brutalist norms, almost sensuously curvaceous, if riddled with design cues – wraparound visor screen, vented tail lights – that link it to the company’s earlier, significantly less hybrid cars.

Perhaps surprisingly for a man whose name adorns some of the most powerful cars mankind’s yet produced, Christian von Koenigsegg is no EV sceptic. ‘There is no doubt that they’re are here to stay,’ he says. ‘But for long-range cars, the batteries are large, resource-intensive and heavy. Heavier batteries create more rolling resistance, plus the battery has the same weight full or empty.’

He also points to the huge infrastructure challenge long-range EV driving presents. One answer is hybrids combining electric power with efficient combustion engines running on ‘CO2-neutral’ fuels like ethanol or photofuels (alcohol and hydrocarbon fuels from cultivated microbes). The Gemera claims a 621-mile range, of which 31 miles is via EV running. Intercontinental range, fast fuelling, performance, low Co2 emissions and the irreplaceable thrill of wringing out an engine – the Koenigsegg Gemera promises it all, as it perhaps should with pricing from $1.7 million. That kind of money makes it an irrelevance, of course, unless it’s simply the future of the performance car well ahead of its time. Breaking the mould, pushing for the impossible, re-defining normal – these things have never been cheap.

Battery is visible to the left of the transmission tunnel, which runs forward from the petrol engine and crankshaft-mounted e-motor.

Interior doesn’t have to be yellow 918 Spyder meets Taycan, has handsome Swedish child

The Gemera debuts Koenigsegg’s Freevalve camless valve system, something Christian’s been working on for more than a decade. While the benefits are clear, the system is complex. Christian’s team have had to develop everything themselves, from scratch, including the valve actuators and the control strategies. The engine uses springs to close its valves but actuators to open them (their movement is hydraulically damped) and, unlike even the cleverest, most variable of cam-based systems, Freevalve gives Koenigsegg complete control over when, how far and how fast the valves open. The compromises of a traditional cam are gone. This, together with Koenigsegg’s mastery of turbocharging, helps explain the unit’s mighty specific output. The engine weighs just 70kg; the Gemera 1850kg with fluids and ready to roll.