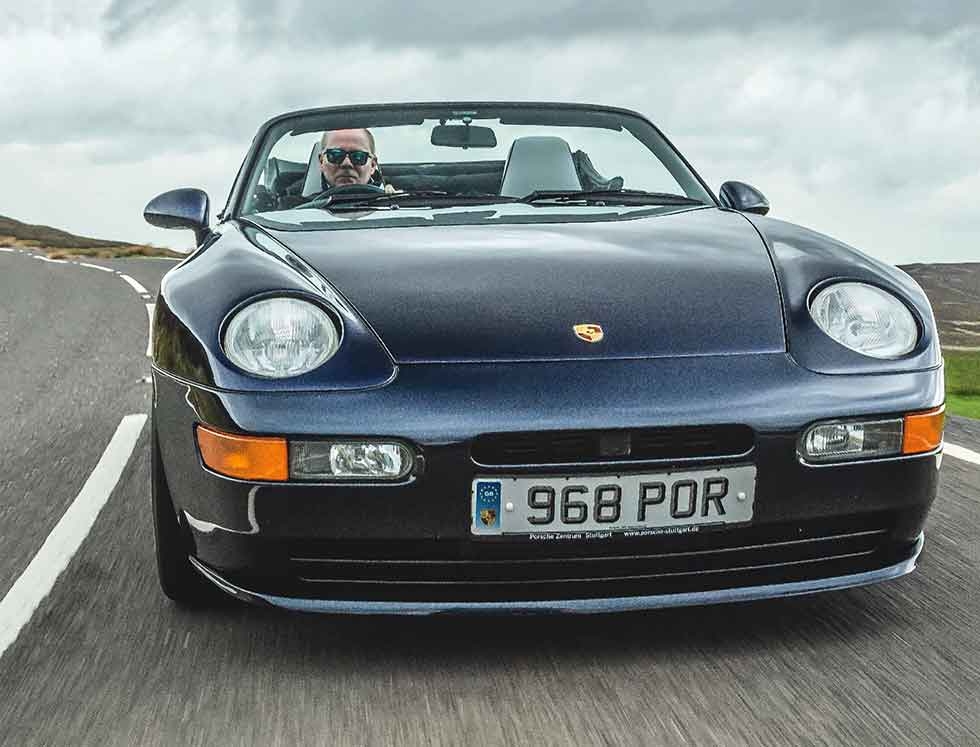 My love affair with sports cars started during my twenties when I bought a Lotus Esprit S3,” recalls Tim Gray. “Additionally, I’ve always been drawn to great engineering. The combination of these two passions resulted in my decision to buy a Minerva Blue 944 Turbo Cabriolet,” he smiles, well aware of the fact he was the proud owner of a hugely desirable Porsche. There was only one problem: he’d set out to buy a 968!

“I love the look of the 968. I’d entertained ideas about buying one for a long time, but an eventual test drive in a standard example left me completely underwhelmed. I appreciated how well built the car was, but the sluggish way it delivered its naturally aspirated power didn’t excite me. With a lack of turbocharged 968 available to choose from, I reasoned buying a 944 Turbo was the next best thing.”

We’ve all been guilty of spending hours scanning Porsche-themed forum posts and Facebook groups, taking inspiration from what others have done to their cars and then applying what we’ve learned to whatever flavour of Stuttgart sports metal is sitting on our driveway or tucked up in our garage. Tim went a step further. “I was reading a project thread authored by a guy who’d supercharged his 968. I was immediately struck by the fact this was the perfect solution to my frustration at not being able to buy a 968 loaded with forced induction!” he beams, before telling us he wasted no time in getting in touch with Warrington-based independent Porsche specialist, Ninemeister.

“We’d converted half a dozen 968s to forced induction by that point in time,” says Ninemeister man, Peter Robinson, confirming Tim’s transaxle was in safe hands. “The concept came about after Ninemeister owner, Colin Belton, bought a 968 Clubsport as a company demonstrator to use for participating in hill climb competitions. Quickly, we realised the car was down on power compared to the other vehicles it was competing against. Developing our own supercharger conversion kit was a great way of putting us on a level playing field.”

Tim presented the team with a 1993 968 Cabriolet, the only open-topped 968 Ninemeister has converted. The car now makes use of a Rotrex C38-61 (the most compact blower in the C38 range), a versatile, high capacity unit capable of producing power of up to 550bhp on engines with displacement of up to five-litres.

Using patented Rotrex planetary traction drive, the C38-61 has a 7.5:1 drive ratio and can achieve impellor speeds of up to a lofty 90,000rpm! Obviously, custom brackets needed to be made to mount the supercharger in Tim’s car’s engine bay (which necessitated an air-conditioning system delete and repositioning of the alternator), plus there was the not insignificant act of fitting a large intercooler, custom boost pipes with Samco silicone hoses, a custom supercharger pulley, a bespoke expansion tank and various other pieces of new hardware, but Ninemeister’s prior experience proved invaluable, resulting in hassle-free installation which promised to boost power to the 360bhp mark.

It would be easy to have an ‘off the shelf ’ custom ECU chipset designed to take into account equipment common to the conversion, but as Peter explains, every Ninemeister ECU upgrade applied to an altered 968’s electronic brain is unique to the host vehicle. “Old-school Motronic ECUs aren’t mappable in the same way as modern car computer equipment, hence the need to replace standard chips with new parts loaded with software written specifically for the application,” he explains. “This involves us making use of an emulator which mimics the ECU, enabling us to make changes to a live map until we’re satisfied with the results we’ve achieved. We can then write the finished map to fresh chips, which are then fitted to the factory ECU in place of the original parts.”

Chasing ponies is all well and good, but as any tuner will tell you, the key to successfully enhancing the performance characteristics of your car lies in improving the way it handles and slows. “Colin told me there was little point in fitting a supercharger and drastically improving the car’s power output if I wasn’t prepared to factor in upgrades to the suspension and braking systems,” remembers Tim. He didn’t need telling twice; before long, the keen modifier invested in a set of KW adjustable coilovers and 993 Turbo brakes with two-piece cross-drilled discs. The ‘Big Red’ calipers needed larger wheels to accommodate them, which is why the car now rolls on striking nineteen-inch 996 five-spokes.

While the 968’s three-litre Variocam-equipped beating heart (the fourth-largest four-cylinder engine ever offered in a production car up to that time) and the model’s six-speed manual transmission are generally regarded as bulletproof, it made sense to replace or upgrade each part’s serviceable items, regardless of when they were last changed. To that end, an uprated flywheel, a heavy duty clutch, new camshafts and a renewal of the water pump and timing equipment ensured faultless operation when this nifty 968 was returned to the road, complete with its Techart rear lip spoiler and front splitter.

“The car handles and performs brilliantly,” beams Tim. “Power output is pleasingly linear. Unlike a turbocharged car, boost is accessible throughout the entire rev range. A Quaife ATB limited-slip differential enables me to put all of that power down without losing traction, and a free-flowing exhaust has ensured extra responsiveness and a pleasing bark.”

The rag-top nature of his reborn Midnight Blue belter enables him to enjoy its supercharged soundtrack whenever he hits the open roads of the Berwyn Mountains near where he lives close to the England and Wales border. He loves driving with the roof down, although expresses frustration at the damage retracting it causes to the rear window. “I ordered a new colour-coded canvas roof while the car was undergoing work at Ninemeister,” he tells us. “I also bought a new plastic rear window due to the original part showing its age. Sadly, » folding the roof down causes the plastic to bend and graze. It’s impossible to keep in ‘as new’ condition!”

Tim is clearly over the moon with the impact forced induction has had on his last-gen transaxle, a brilliant example of the final evolution of Porsche’s water-cooled, front-engined, rear-wheel drive concept. He owns a 997 Carrera 4S Targa “for more refined driving,” but assures us he’s informed his wife he wishes to buried at sea in his 968! “It’s a good car in stock trim, but amazing when modified. The leather has been reconolised and I’ve fitted Pioneer audio equipment in order to bring the interior up to modern standards, although with just over 50k miles covered from new, it’s not as though the car was showing its age,” he laughs.

The last 968 rolled off the production line almost twenty-five years ago, but as Tim’s supercharged pride and joy ably proves, with a selection of well considered, well executed modifications sympathetic to Porsche’s original design, the manufacturer’s transaxle cars remain young at heart.

A supercharger is an air compressor increasing the density or pressure of air entering an engine, giving each intake cycle more oxygen, which allows more fuel to burn. This action forces the engine to work harder, thereby creating more power. Superchargers are usually belt-driven, spinning in accordance with revolutions of the engine. The size of the pulley used determines how much boost is made (a smaller pulley will spin faster, creating more boost). Turbos differ in design insofar as they have an exhaust gas housing instead of a pulley. As the car produces exhaust, the gases spin the turbine, causing compressed air to enter the engine.

Favourite Porsche – This one!

Worst thing about your 968 – When retracting, the power roof likes to graze the brand new plastic rear window