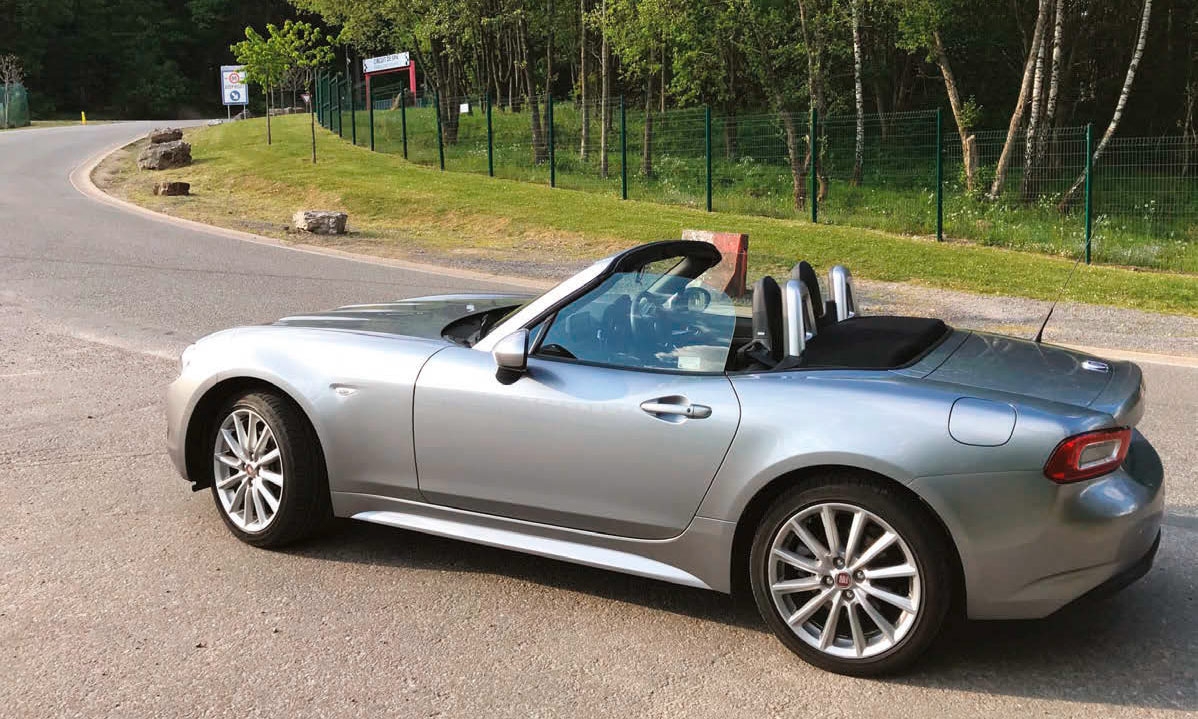 Spider to Spa Fiat’s 124 Spider proves the perfect car in which to discover the lost secrets of the old pre-1978. Spa circuit in Belgium. Words & images: Chris Rees.

Belgium is flat. Billiard table flat. And crowded. In short, not the sort of place for a sports car test. But in the less populated south eastern corner of Belgium lie the Ardennes mountains; and in a corner of the Ardennes is the village of Francorchamps, whose ironrich spring gave the town a prefix – ‘Spa’ – and is behind the name of one of the most famous corners in motor racing: Eau Rouge.

Welcome to the Spa-Francorchamps circuit. I’ve driven 300 long, flat miles to get here from the UK, but it’s been worth it. My companion is Fiat’s 124 Spider, which has made mincemeat of the journey over. It’s been top down all the way, except for one tiny splash of rain – easily dealt with thanks to the easiest soft top design ever, taking mere seconds and next to no effort to do manually. With the roof off, I’ve been able to enjoy the 124’s rorty, raspy exhaust note, but without things ever getting too loud or unrefined, even on the motorway.

Fiat’s excellent 1.4-litre MultiAir turbo engine has 140hp of power, which is just enough for a solid dose of fun. With 177lb ft of torque at just 2250rpm, it’s also a brilliantly relaxed cruiser when you want it to be. Since there’s mid-range urge aplenty, you rarely need to change gear. That’s a shame in one sense, because the six-speed manual ’box is so crisp and short-shifting and the lever is perfectly positioned.

Spa famously hosts the Belgian Formula 1 Grand Prix in August but I’m here early in the season to attend the Ferrari Racing Days gathering. Spa is a corkscrew of tarmac that’s widely regarded as one of the greatest tracks – if not the greatest – in the world. In its current format, it’s 7km long but it used to be twice that length. From 1921, when Spa opened, to 1970 when it was closed for redevelopment, it linked the villages of Francorchamps, Malmedy and Stavelot, in one dramatic 15km sweep through the Ardennes forest.

Spa was one of the tracks used in the inaugural Formula 1 season in 1950 and was thereafter a firm fixture in the F1 calendar. But it defined the term ‘dangerous’; two British drivers lost their lives here in just one GP weekend in 1960 (Chris Bristow and Alan Stacey), while Stirling Moss also had a big accident.

By 1970, it was clear that Spa was too long, too fast (average speed: 150mph) and too treacherous to host F1 any more. The Belgian GP transferred to Zolder but Gilles Villeneuve’s tragic accident there in 1982 forced a return to Spa for ’83, much-reworked so it was now half the original length. That makes me reflect that in 1983, the original 1966 Fiat 124 Sport Spider was still in production.

On the shortened circuit, some of the most spectacular parts had disappeared. Luckily, however, you can still drive the route of the old track on public roads. Heading out of Francorchamps, you pass the main entrance to the modern track and sweep into the forest up a hill towards Les Combes, the highest point of the circuit – and the highest in the region – on roads that trace the old track.

The 124 Spider loves to attack these sweeping bends. The suspension’s compliance means the ride is surprisingly good, with only the faintest sign of scuttle shake. The steering turns in with eagerness and offers solid feedback through the wheel. Pushing hard delivers benign understeer on the narrow 205/45 tyres, but equally you can get the tail end to move around if you’re pushing hard, which is delicious fun. I head downhill through what seems to be a neverending corner, the Virage de Burnenville, once a superfast challenge for racers but these days a 30mph urban zone. Turning left to avoid the town of Malmedy, the road continues towards Stavelot along what was a tremendously fast straight in racing days. It’s punctuated mid-way by the infamous ‘Masta Kink’, a significant ‘S’ in the road. The 124 Spider barely needs to shed any speed here, but back in the day, this was a chicane requiring nerves of steel to thread at speed – a second Eau Rouge, if you like.

Just before I reach the junction of the N68 road at Stavelot, I spot an unmarked section of tarmac sweeping up to the right; this turns out to be part of the original circuit, nowadays crumbling away but still navigable, whose original barriers bear distinct signs of damage from decades ago. This road leads you up to the final section of the old track heading towards Blanchimont – a dead end because huge gates prevent you joining the current circuit at Blanchimont.

It’s time to turn around and retrace my steps. Sadly there’s no chance I can take the 124 Spider on track; racing Ferraris are monopolising the weekend.

(It’s perfectly possible to drive your own car, or a rental racer, by the way, if you come on the right day.) I do luck out by bagging a lap in the passenger seat of a Ferrari FXX K, though, which turns out to be a deeply salutary experience. Its 860hp hybrid powerplant makes it searingly fast at Spa, where you can be exceedingly hard on the brakes and it just stops. Through the most epic corners – Eau Rouge, of course, but also Pouhon and Blanchimont – the grip is literally unbelievable.

Returning back to the UK in the 124 Spider, my companion strikes me as a sports car from the old school – rather like the classic Spa circuit, in fact. Rediscovering the lost, early-form track has been the ideal test for the car, threading twisty roads in forested hills and touring in style. No, this isn’t a car you’d choose to take around the current Spa circuit, but on the old one, now returned to public use, the 124 Spider has been a great companion.

Map below provides a clue to the scale of the old circuit versus the new one; you can drive most of it.