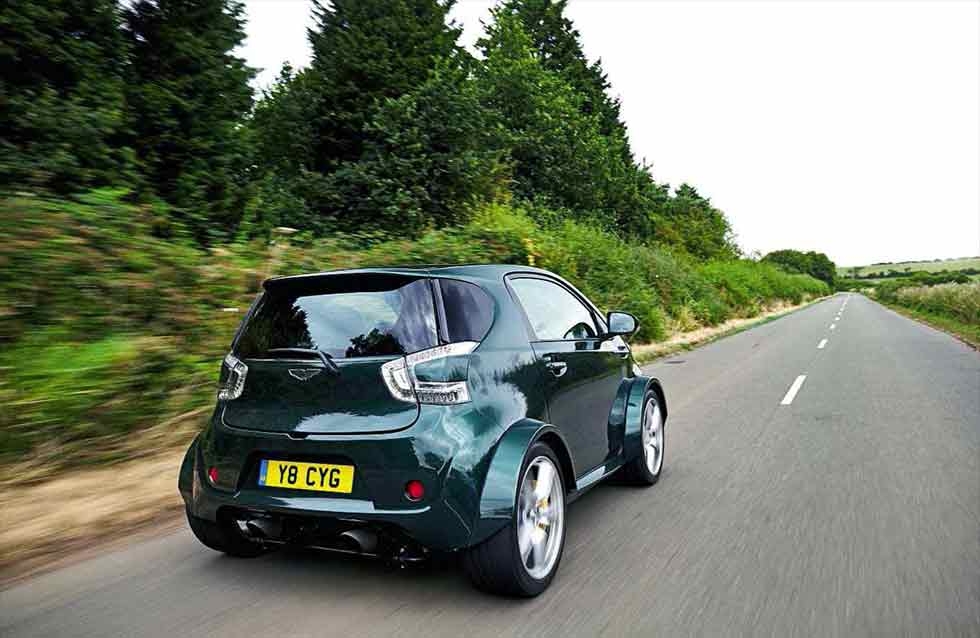 A special commission from Aston Martin’s Q division, this V8-engined Cygnet is faster than most sports cars, and proof that Aston – and its customers – have a keen sense of humour. We take it for a spin. Words John Barker. Photography James Arbuckle.

DRIVE CYGNET V8 What happens when you slot a 430bhp engine into a city car? Let’s find out!

Just behind the tall wooden fence there’s something tasty being lightly exercised, something with a rich, resonant V8 growl. This being Aston Martin’s HQ, I’m expecting a low, sleek sports car to emerge when the security gate whirrs open, but instead a Cygnet trundles out, tall and boxy… trailing that delicious V8 rumble. Cognitive dissonance in car form, right in front of me. The daft thing is, it’s what I’ve come here to drive. I just didn’t expect it to sound quite so fruity.

It’s not a Cygnet, though, it’s the Cygnet, the one with the 430bhp, 4.7-litre V8 engine, the one that wowed the crowds when it was revealed at the Goodwood Festival of Speed in July and howled angrily up the hill through unsilenced pipes. It wasn’t quite finished then but both Aston and the customer who commissioned it agreed that the exposure was too good to miss. Now, about a month later, it’s been signed off and is ready to be handed over… once a few lucky souls have tried it.

It’s taken a bunch of talented Aston Martin engineers ten months to create this outrageous one-off – part of the deal is that there will only ever be one – but the concept is much older than that. It dates back to 2013, to the last days of Cygnet production, when Gaydon wasn’t such a busy place and ‘Saturday Club’ projects like this could ferment under the radar. There were a number of spare Cygnet bodyshells and some of the engineers wondered if the V8 engine from the Vantage could be squeezed in. CAD said no, unsurprisingly. To fit the drivetrain, suspension and subframes from the Vantage would require, in the first instance, some drastic remodelling of the floorpan.

It would certainly have given the Cygnet a good send-off, though. Aston’s city car always sat rather awkwardly with the rest of the range, and regardless of whether you swallowed the line about it being essential to bring down the firm’s corporate CO2 numbers, most saw it for what it was: a Toyota iQ gilded with Aston styling details and a bespoke, leather-trimmed interior and, at over £30k, costing more than twice the price of the car on which it was based.

Aston had hoped to sell thousands, but the Cygnet was axed after three years, having sold mere hundreds (initially restricting sales to existing Aston owners may have clipped its wings). The irony is that its rarity has now been recognised and in the last couple of years values have risen – you’ll be lucky to find a good one now for £30k.

The idea of the full-blooded V8 Aston Cygnet lay dormant until a good customer and friend of the company heard about the project in a casual conversation with engineers. ‘Could it be built?’ he asked. The question was fielded by Aston’s in-house artisans, Q by Aston Martin, who after some consideration accepted the challenge. They remain coy about how much it cost to create, saying only that it was between a quarter and a half a million pounds.

Up close, the impression is of a car full to bursting with mechanicals; they’re pressed right up to the Aston mesh grille, which looks like the net of a trawler bulging with a catch. Lift the tiny bonnet, whose vents were originally for show but now have a purpose, and nestling low in there is the plenum chamber of the old Vantage S’s 4.7-litre V8. Most of it is rearward of the base of the windscreen, which would make changing the plugs tricky. ‘It would be easier to drop the engine,’ says one of the engineers.

To get the Vantage’s V8 and suspension in there required the front bulkhead to be moved back a full foot and modified to accept the mounts of the donor car’s extruded aluminium front subframe. Even so, there still wasn’t quite enough room in the nose for the V8’s bulky MAF (Mass Air Flow) sensors, so they were deleted and the engine management retuned. The fact that the engine bay looks neat and production standard illustrates the attention to detail of the Q by Aston Martin team; there are many bespoke parts in here but, unless they’re pointed out, you wouldn’t know.

The bodyshell was modified to accept the Vantage’s rear subframe, too, while the comprehensive roll-cage features outriggers that pick up on the suspension top mounts front and rear to provide valuable stiffness and strength. The front and rear are also linked by the Vantage’s torque tube – much shortened – which joins the back of the engine to the nose of the transaxle, a seven-speed semi-auto here.

Clamber over the cross-bracing of the cage, painted the same Buckingham Green as the shell, and into the Recaro bucket and you’re in a unique environment. It’s a pity that elements of the regular Cygnet interior, arguably its most Aston Martin feature, couldn’t be retained, but moving everything back 12 inches demanded a bespoke solution. So you’re surrounded by acres of beautifully executed carbonfibre, the facia moulding incorporating the centre vents and switchgear of the Vantage while the small instrument binnacle houses the distinctive, silver-faced Vantage dials. Behind the seats, under a box signed by all the people who helped make the car, is a measly 30-litre fuel cell. When it’s full, the super-Cygnet’s weight distribution is 52/48, front /rear. Empty, not much different,

I imagine. And it feels like it won’t take long to arrive at that state.

Press the crystal-like key into the slot and the Cygnet erupts with a sensational V8 bark. The attention-grabbing, straight-through, Festival- of-Speed-spec exhaust has been replaced by a more road-legal system, but one that still growls and rumbles with character at idle. Hit Drive, tickle the throttle and you’re away, sitting tall in a 4.7-litre, V8 Cygnet. It feels as odd to drive as it is to write that sentence.

I’d feared it would need wheelie bars to stop it flipping back onto its roof at the first press of the accelerator but, even with the Sport button pressed, throttle response is mercifully soft, despite the V8 Cygnet weighing just 1375kg, which is more than 200kg less than the donor Vantage. The nature of the naturally aspirated V8 is such that it doesn’t wake up until the rev- counter needle has swung past 3500rpm, so it takes a while to get going, but when it does the V8 roars to the red line like it has come on boost. It feels crazily, loopily quick.

There have been many technical challenges to overcome, including integrating Toyota wipers and lights with the Aston loom, but none proved trickier than refining the shifts of the automated manual. The trouble is that the huge reduction in weight and thus inertia affected the way the car picked up and shed speed, demanding a bespoke shift strategy. Even now it’s not production-car perfect, occasionally fumbling low-speed refinement, but if I’m honest I’m more interested / concerned / terrified about how the Cygnet’s handling has turned out.

The Toyota iQ never felt teeny like a Smart car because, although similarly tall, it was as wide as a regular car, and this is confirmed by the fact that fitting Vantage front and rear suspensions and 19in alloys has required quite modest wheelarch extensions of about 5cm at each corner. The wheels and tyres do look massive in relation to the rest of the car, though, with 235-section tyres up front and 275s at the rear. There’s certainly no shortage of grip. In fact, early in development, when the suspension was relatively soft, under emergency braking the Cygnet was lifting its rear axle off the ground. Stoppies rather than wheelies, then.

The final set-up is much stiffer, to keep pitch, roll and wheel movement in check, which has to be a good thing with a projected top speed of 170mph and 0-60mph in a claimed 4.2sec (even faster than the Vantage S donor). Its firmness is apparent over any kind of ridge or lump in the road, even at low speed, but the car feels solidly made and refined, with no rattles or buzzes, indicating it has been built with skill and care.

On smooth, sweeping A-roads it feels pretty sorted, and for a moment it seems like it might not be too bad on a twisty B-road. The steering is standard Vantage and feels quite slow, but this is a good thing because the further you drive, the more you appreciate that the V8 Cygnet is not a car you want to over-excite or provoke. While it’s not short of grip, there’s no traction or stability control and I can’t imagine pushing it to the point where you’d need to apply any corrective lock. I’d leave it at home if it was raining. However, the main concern is that bumps that most cars would take in their stride upset the Cygnet, even in a straight line, and the idea of finding one mid-corner, going hard, tempers your enthusiasm.

In fact, in character, the V8 Cygnet reminds me most of Renault’s mid-engined Clio V6. It’s flawed but exciting and there’s a mad, intoxicating glory to it. The absurdity of this level of performance in a tiny car puts a massive grin on your face. So does rumbling into towns and seeing people turn to see where the rich V8 drawl bouncing of the walls is coming from – and double-taking, slack-jawed, when they figure out it’s the Cygnet. I doubt Aston Martin will ever make a crazier car.

Right and below. Wheelarch extensions are the main external clue to what lies beneath, which includes engine and running gear from a V8 Vantage S, a roll-cage, and race-spec seats and harnesses. Signatures are by everyone who worked on the project.

Above and opposite. Inside, everything’s been pushed back by about a foot and reformed in carbonfibre and Alcantara. Instruments and switchgear are Vantage. Our man Barker finds it beautifully made and surprisngly refined, but he’s glad roads are dry.