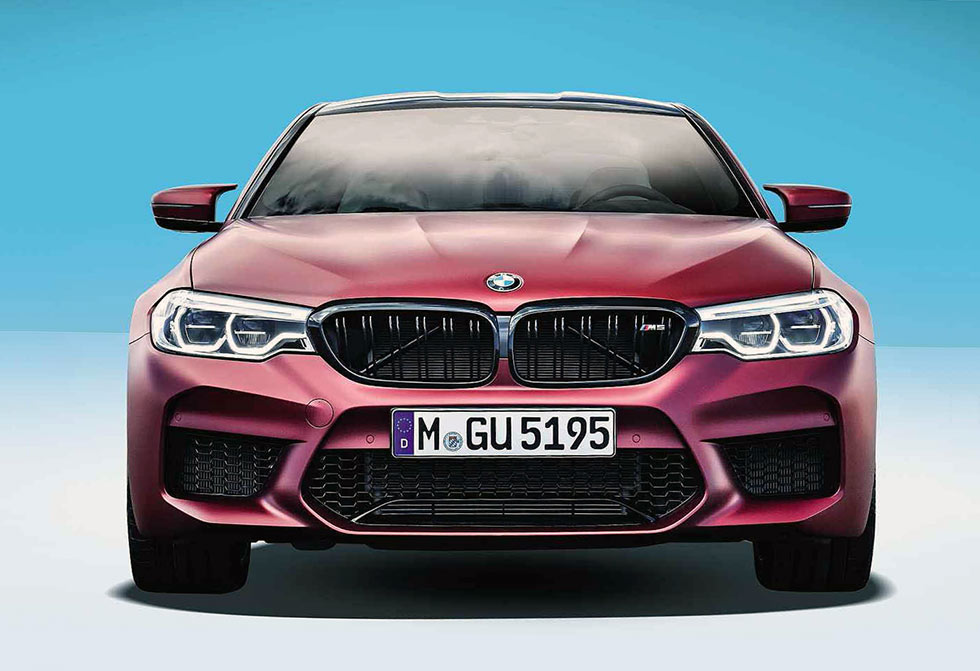 BMW has released its first official images of its all-new M5, along with confirmed specification details, ahead of the car’s debut at the Frankfurt motor show. Designated F90 and based on the latest BMW G30 5-series, the sixth generation of the M5 goes on sale next year, priced from £89,640.

As we already know, and indeed have sampled for ourselves on track, the F90 is the first M5 to feature all-wheel drive. However, in much the same way as the Mercedes-AMG E63 S, it can also be switched to purely rear-wheel drive, via the iDrive interface. BMW is calling the system M xDrive, and it essentially offers three modes. In the standard setting, the M5 is at its most all-wheel driven, albeit with the front axle only coming into play when the rear tyres lose grip. The next stage is M Dynamic mode, which puts the drivetrain into ‘4WD Sport’. In this setting the electronics allow more slip from the rear axle before sending drive to the front.

Finally, there’s ‘2WD’, only available with all traction and stability systems switched off. BMW says it is designed ‘for track use by experienced drivers’.

With 592bhp and, perhaps more pertinently, 553lb ft of torque, ‘2WD’ mode and a wet roundabout could certainly prove interesting… BMW M has yet to confirm an official kerb weight, but engineers have told us that the new car should be slightly lighter than the outgoing F10M model – and that’s despite the additional 60kg-orso of four-wheel-drive hardware.

The M department has adapted technology used in the M760i, utilising that car’s transfer case with its electronically controlled clutch, along with the Active M Differential from between the rear wheels of the M3/M4. The centre diff can range from 100 per cent open (essentially rear-wheel drive) to a 50:50 split, and is said to be all but seamless in its operation.

The new M5 is powered by the same twin-turbo 4.4-litre V8 as before, although as you’d expect it has been given a thorough update. With revised turbos, increased direct-injection fuel pressure to 350bar and improved lubrication and cooling systems – the former including a variable pump designed for ‘racetrack applications’ – the new engine comfortably exceeds the 552bhp and 501lb ft of the old car and the 567bhp of the previous Competition Package model.

A significant change to the M5’s drivetrain is the switch from a twin-clutch M DCT gearbox to an eight-speed ‘M Steptronic with Drivelogic’ torque converter.

Its operation is governed, as with other aspects of the M5’s behaviour, by modes – there are three, along with Efficient, Sport and Sport+ for the engine – and gears can be changed manually via paddles on the steering wheel or with the gear selector. BMW M engineers claim there is no loss of performance with the Steptronic ’box but an improvement in the sort of everyday comfort relevant to most M5 buyers. Certainly, the performance claims are suitably ballistic: 0-62mph in 3.4sec and 0-124mph in 11.1. That 0-62 time obliterates the old car’s 4.3sec. Thank the traction advantages of four-wheel drive for that. Top speed is limited to 155mph.

So how does the new M5 compare with its most formidable rival, the E63 AMG S? At £88,490 the car from Affalterbach slightly undercuts its Munich rival. It also offers a little more power and considerably more torque from its twin-turbo 4-litre V8 (603bhp and 627lb ft). However, the BMW should be around 100kg lighter, thanks largely to its aluminium bonnet and front wings and its carbonfibre roof. Carbon-ceramic brakes are also an option, saving a further 23kg, though given the M department’s recent improvement in the quality of its standard-fit braking systems, the regular sixpot calipers and iron discs should be more than up to the job.

Naturally, the chassis has been thoroughly upgraded, too, with stronger, stiffer suspension assemblies and firmer, bespoke springs, dampers and anti-roll bars. There are Comfort, Sport and Sport+ settings for both the dampers and the steering, but, along with the modes for the engine and the three-stage control of the gearbox, these can all be saved as preferred settings using the M1 and M2 buttons on the steering wheel. The wheels are bicolour cast-alloy 20in items, with 275/35 tyres on the front axle and 285/30s at the rear.

First road drives of the finished article should take place around November, at which point we’ll know whether the F90 captures the spirit of some of the beloved M5s of yore. Perhaps only in the years to come will we be able to judge whether the F90 is simply another step on a relentless development quest for more power and acceleration, or whether it marks the tipping point for the near-two-ton, 600bhp super-saloon.

Top: a key change for the F90 is the switch from a dual-clutch gearbox to a torque-converter auto with manual override via paddles or the gear selector. Above: exterior detailing, including wing vents, revealed for the first time. Above right: cockpit is packed with latest tech, as you’d expect with a £90k price tag.