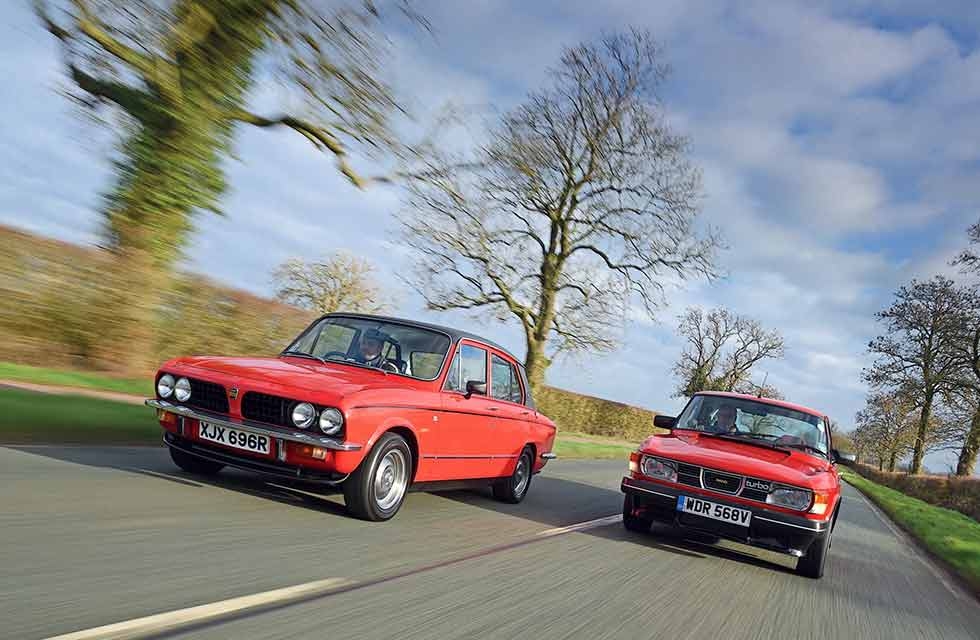 Think of the Dolomite Sprint and it conjures the image of a moustachioed man in an Afghan coat, with woodbine hanging out of the window, on a wet street in Birmingham. The sort of bloke who smelts things for a living, or maybe blows glass – ashtrays, not champagne flutes. Toeing the line in the adjacent lane is the Dolly’s Nordic rival, the futuristic Saab 99 – its brushed-aluminium-effect ‘turbo’ script giving bragging rights to the turtle-necked wearer of thick-rimmed glasses behind the wheel. The two cars could hardly be more different and yet, beneath their bonnets, the 99 turbo and Dolomite Sprint share powerplants derived from the same humble beginnings – the roots of which stretch back to a deal hammered out for mutual benefit in 1965.

Triumph set the ball rolling in 1963 when investigating possible replacements for its ageing engine range – a scope so broad that it even considered rotary power. The Standard Eight-derived four-cylinder unit was elderly, and even the straight-six that powered the fuel-injected TR5 was a dinosaur in technological terms – too long and too heavy for the new breed of ’70s sports cars. By chance, Saab was also working on a ‘four’ to power its forthcoming 99 and contracted British firm Ricardo to carry out early development. Costs quickly became an issue for the comparatively small company so Ricardo, aware of Triumph’s programme, made an introduction that would lead to a pooling of resources between Trollhättan and Canley. Saab would turn over its drawings and prototypes, and in exchange Triumph would build the engines, supplying the Swedes with some 50,000 units. The result of the collaboration was the Triumph slant-four. Compact and powerful, it featured four cylinders tilted at 45º from the vertical, which not only allowed for a low bonnet line, but also provided cost benefits when expanding the range. Essentially, two slant-fours could be combined to create Triumph’s 3-litre V8, saving investment in additional tooling. It was in this form that the engine made its way under the bonnet of the Stag – but it was Saab that would be first to make use of the 1709cc ‘four’ when its space-age 99 broke cover in ’1968.

Plans for the new model were announced in November 1967, with Sixten Sason’s bold design going into production by autumn of the following year. Saab had taken the new crossflow powerplant and mounted it longitudinally, with the clutch and Triumph 1300-derived gearbox mounted at the front of the car, following the front-wheel-drive layout of the 96. The dead axle at the rear was also carried over, though by now straight rather than U-shaped, and located by a four-link system with Panhard rod, while stopping came via discs all round.

By 1972, Saab had reinvented the slant-four. The 78mm stroke and canted cylinders were retained, but engineers at the firm’s Scania division in Södertälje completely overhauled the cylinder head and block, adding bigger valves, ports and constant-depth combustion chambers, as well as water jacketing for each cylinder. Now fuel-injected, the ‘B’ engine produced 120bhp and, with its added strength and improved build tolerances, proved the perfect platform for the powerful 99 turbo that arrived in 1976.

Triumph’s V8 had been considered for the new model, but the firm opted for a blown version of the revised engine, featuring an exhaust-driven Garrett turbocharger with a pioneering wastegate and boost-control valve to direct excess exhaust gases past the turbine. Power shot up to a BMW-baiting 145bhp, but the real story was a torque increase of some 45%, while the use of manifold pressure to reduce boost at high revs helped fuel economy. Saab claimed that during an average journey the turbo would only be on boost for 15% of the time – and the driver could tell when it was, thanks to a racy dial mounted on top of the dashboard.

The boost gauge isn’t the only interesting styling detail on the turbo, a car bristling with curious features notable for their eccentricity and ergonomic brilliance. The over-engineered doorhandles, for example, have a hidden mechanism that opens the heavy door with a satisfying click. Stepping into the cabin is a breeze thanks to the ingenious indented sill built into the bottom of the door, which not only removes a likely rust trap, but also stops your bell-bottoms getting mucky. The modernist seats are trimmed in red velour, the dashboard finished with faux wood, the grabhandle for your passenger giving a nod to the firm’s sporting heritage.

Erik ‘On the roof’ Carlsson would no doubt have approved of the fighter-jet-style curved windscreen, with deep yet narrow A-posts and near-unimpeded view of the road ahead. It feels like a vision of the future, as likely to take off as drive down the road… once you get it started.

‘The Dolly’s overall sensation is that of a go-kart, an impression reinforced as you wake up the angry little engine’

The ignition barrel is eventually discovered between the two front seats – so placed to avoid harm to driver and passenger in the event of a crash. Give it a twist and the ‘B’ kicks quickly into life, sounding purposeful in the refined sort of way you would expect from a Swedish sporting saloon. The gearchange is precise, the clutch binary in its operation, but once on the move the car is marked by docility at low revs. Put your foot down in second or third gear and the response is swift, with slight lag before the turbo spools up eagerly. Above 3000rpm the engine really sings – keep the boost gauge firmly in the red and the pace of the 99 turbo still has the ability to surprise. It’s only when the route turns twisty that the Saab falters slightly, with the direct yet low-geared steering feeling more suited to high-speed motorway blasts than crosscountry progress, and the comparatively soft suspension allowing a decent degree of roll.

As our two cars chase across the back-roads of Rutland, it becomes clear that there’s little to choose between the supersonic Saab and bantamweight Dolly Sprint in terms of outright pace, which is remarkable when you consider the divergent paths that each manufacturer took in their pursuit of performance. While Saab’s development ultimately led to forced induction, Triumph’s treatment of the same basic block took a very different route. One that was arguably even more groundbreaking.

Saab was given exclusive use of the shared engine in the early years, and Triumph only unveiled its new four-pot model – the Dolomite – in 1972. It proved an immediate success, combining practicality and performance with a famed level of luxury. Where rivals made do with cheap-looking plastic interiors, the Dolomite was trimmed in plush Bri-Nylon cord and real wood, while the instruments were lifted straight from the upmarket 2000. So confident was Triumph in its new model’s fit and finish that the only options initially offered were an automatic gearbox and Sundym glass.

The cooking 1854cc Dolomite was hailed for its sporting prowess, comparing favourably against more expensive Continental rivals such as the BMW 1602. Triumph, however, had greater ambitions, which were met in 1973 with the arrival of the range-topping Sprint. From the outside, you would be hard pressed to separate the new car from its entry-level stablemates – black vinyl roof and cast-alloy wheels aside. But beneath its restrained exterior lay a number of technological advancements that were if not revolutionary, then certainly revelatory.

Most notable was the enlarged 1998cc engine, which upped power to a remarkable 127bhp – enough to propel the saloon to 60mph in just 9.1 secs and on to a 116mph top speed. The aim had originally been higher, with the firm deciding to abandon the proposed ‘Dolomite 135’ moniker to account for power output consistency, despite achieving 150bhp in early tests.

Triumph’s secret to the improved performance was a new multi-valve cylinder head of a type rarely seen outside of motorsport, with 16 inlet and exhaust valves operated via one camshaft – an award-winning design influenced by advice from Coventry Climax engineers. Each one of the eight cams operated an inlet valve, as well as a rocker arm that actuated the corresponding exhaust valve. The result was a small but mighty engine that outperformed everything in the Triumph range apart from its V8 stablemate.

To cope with the extra power from the new 16-valve head, the Sprint received a number of drivetrain upgrades. Engineers played pick-and- mix with the parts bin, fitting an uprated short-ratio version of the four-speed gearbox used in the TR6, a rear axle stuffed with the gizzards from the same, plus brake pads with a new and improved compound. More committed drivers could even specify their new Sprint with a limited-slip differential.

These improvements tell on the road, where the Sprint’s 195kg weight advantage perfectly compensates for its power deficit – and while the Saab is two-tenths quicker to 60mph, it’s the Triumph that feels the faster car. Part of that is down to its size; the Dolomite looks as if it has shrunk in the wash, even next to the two-door 99 turbo. Climb inside and the use of space is impressive, with a bright and open cabin that harks back to a bygone era. It sits low, too – even more so Charles Nunn’s example, which benefits from the common Dolly upgrade of firmer suspension. The overall sensation is that of a go-kart, an impression reinforced as you wake up the angry little engine, snick the gearlever into first and drop the clutch.

Like the Saab, the Sprint maintains some semblance of sanity at low speeds, despite its fruity exhaust note filling the cabin. Plant the accelerator and it really takes off, building revs quickly and launching itself down the road. Power seems to grow the harder you push, coming on song early and reaching a crescendo at 5500rpm. That uprated suspension does the job in the corners, with quick steering that loads up beautifully, providing the confidence to really lean on the small saloon through sweeping bends. The package is so engaging that it’s easy to forget you’re behind the wheel of a stodgy four-door family car and not a racy GT.

Comparing the 99 turbo and the Dolomite Sprint is not an easy task. Partly because the cars are ostensibly so different, but also for their striking similarities – as if members of the same species cast adrift on separate islands and allowed to evolve in isolation. One became an early adopter of forced induction, while the other pioneered multi-valve technology.

The Saab is a real object of intrigue, littered with curious and forward-thinking design features of which it would be difficult to tire. It’s a distinctive machine that stands out from the crowd, with performance that cements its place in automotive history. In contrast, the Dolomite Sprint is more conventional, with a place for everything and everything in its place – but beneath that outward conservatism lies genuine innovation and infectious dynamism. Own both and, whichever set of keys you pick up in the morning, you won’t be disappointed.