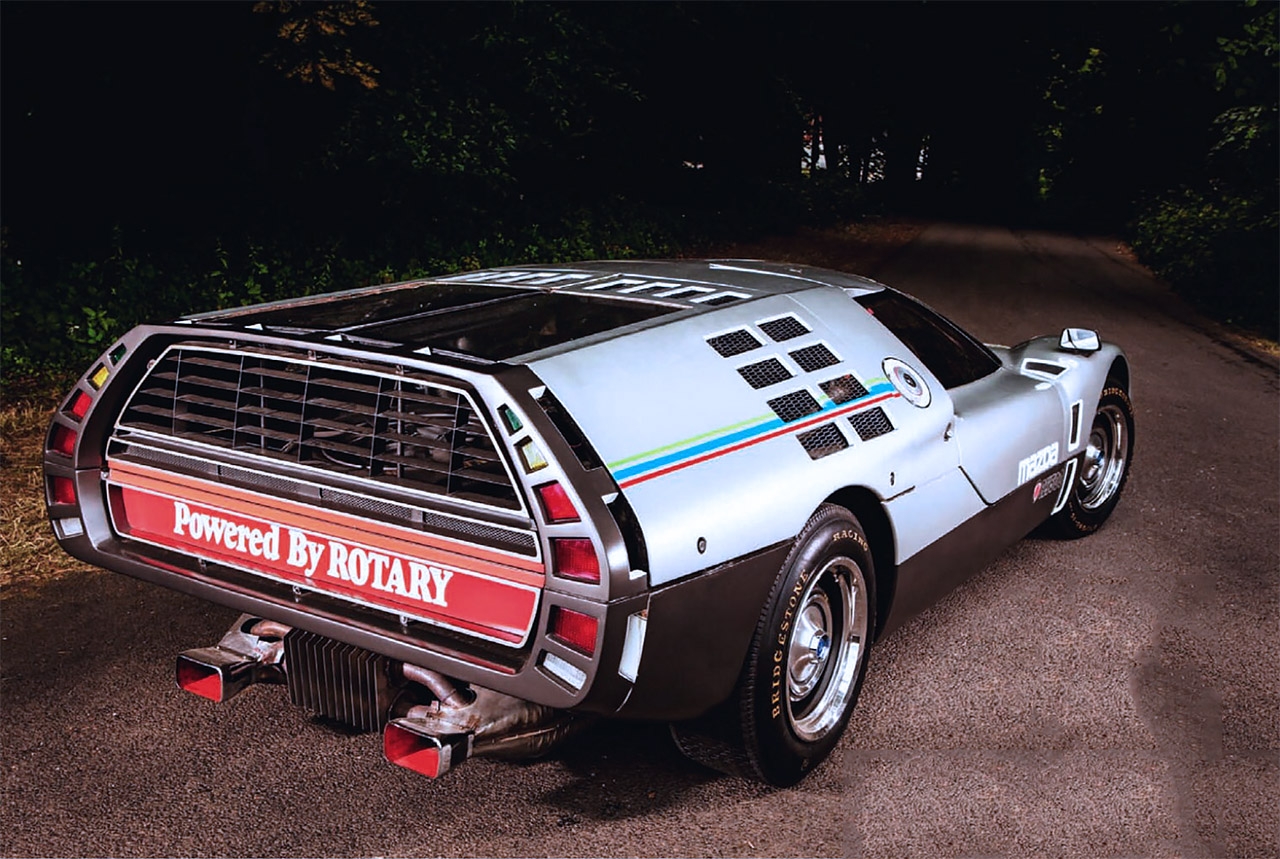 The restored Mazda RX500 almost stole the show when it made its, European debut at the Goodwood Festival of Speed. Mick Walsh investigates the rotary-powered ‘safety car’. Photography Tony Baker.

The dawn of the 1970s was an unsettling time for all, and nowhere more so than in Japan. Morale might have been boosted by the hosting in Osaka of the Expo ’70 world’s fair, which promised an economic upswing, but in Tokyo the effects of pollution were underlined by hospital reports of collapsed commuters. As the UK reeled from the news of The Beatles splitting up, cult album Ram Boo Rock by Minoru Muraoke fused traditional sbakuhachi with jazz. For most Westerners, Japan remained another universe, but it continued to scrutinise Europe for styling inspiration and trends. 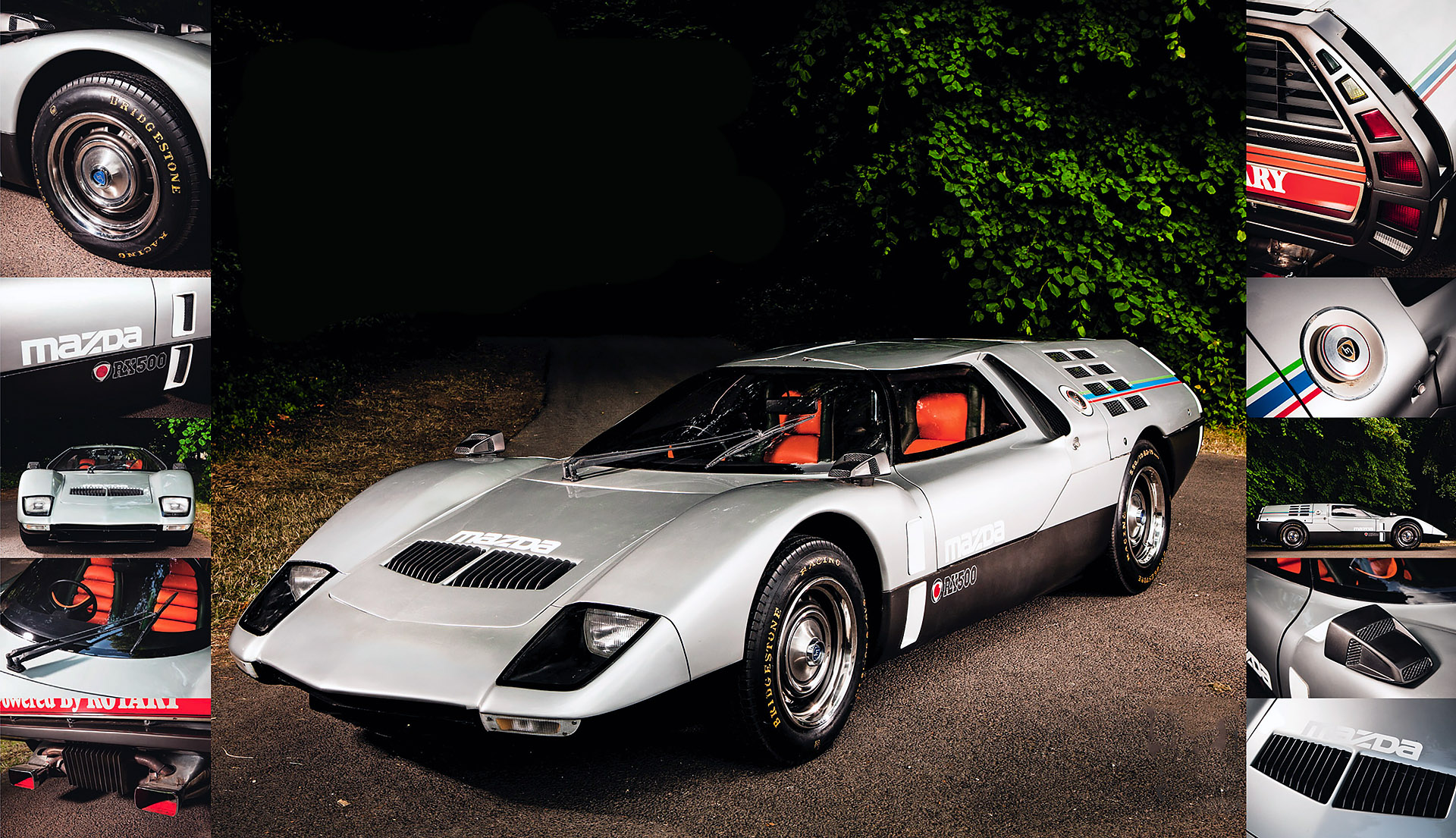 At the 17th Tokyo Motor Show, the talk was all about low-emissions engines, improved fuel consumption, safety and compact city commuter cars. For the first time at the Harumi Fairground event, European imports were invited for display, but the gloomy market forecasts didn’t deter a spectacular group of indulgent supercar concepts from all of the major homegrown manufacturers.

In the year of the sensational Ferrari Modulo and Bertone Zero, the wedge ruled, and Japanese styling studios followed suit with a dramatic set of prototypes that have rarely been seen in the West. Many are now lost or locked up in factory vaults, but, for visitors to the 1970 event, there were plenty of dream cars to discuss.

The concept with the most realistic production prospects was the Isuzu MX 1600, which Ghia’s Tom Tjaarda had remodelled. Eagle-eyed enthusiasts would have spotted that this white wedge was the previous year’s star attraction, but repainted with exposed quad headlights under the nose, wing mirror pods, new trim and a Miura-style slatted engine cover. Based on the R6 racer, this planned Lotus Europa rival could have beaten Toyota by 14 years to be the first Japanese mid-engined production sports car, but it never got the green light.

It was the rotary-powered supercars that stole die show, however. Mercedes-Benz presented its year-old C111, the brilliantly resolved orange prototype with ‘gullwing’ doors and triple-rotor power. Across the huge hall, visitors packed around the Mazda stand to view two experimental designs, both promoting Toyo Kogyo’s major investment in Wankel engines. From the bold stand signage promoting ‘Rotary World’ to the striking body paint of both concepts, yellow was the themed finish. Viewers didn’t know which way to look as the RX500 dream car competed for their attention with a bubble-shaped 200cc hybrid with trapezoid wheel layout that looked like a spin-off from 2001: A Space Odyssey.

Prior to the show, the RX500 had proven that it was a fully resolved design with demonstrations to the press at Mazda’s impressive Miyoshi test course. Journalists had already been given a preview of both concepts back in January 1970 during a private show in Hiroshima commemo-rating Toyo Kogyo’s 50th anniversary. The British press heralded the half-scale clay model as: ‘Mazda’s answer to the C111. Toyo Kogyo (Mazda’s founding company name) claim they have extracted 200bhp from the R100 engine for racing (which has peripheral intake ports and twin-choke Weber), so ‘500’ could mean the power output of the new engine,” surmised Jack Yamaguchi – Motor’s Japanese correspondent.

Toyo Kogyo’s interest in rotary powerplants dates back to 1960, when president Kohei Matsuda and other directors travelled to Germany to persuade Dr Felix Wankel to grant them a licence for what was then little more than an engineering curiosity. It was a dramatic step into the unknown for the Japanese company, and the early rotary prototypes proved to be a disaster. The single-rotor designs almost shook themselves to death when idling, emitted clouds of white smoke, consumed prodigious quantities of oil, and didn’t last for very long before the internal rubbing surfaces deteriorated, resulting in a significant loss of power.

‘EARLY PROTOTYPES WERE A DISASTER, BUT MAZDA REFUSED TO GIVE UP ON ROTARIES’

But in typically Japanese fashion, Mazda refused to give up with the technical novelty, and – mostly thanks to the dedication of engineer Kenichi Yamamoto – the learning curve was rapidly flattened. In 1967, the bold Cosmo 110S coupe became the first twin-rotor Wankel-engined car to go into production. This was followed in 1968 by the cute R100 coupe, but Mazda hedged its bets by offering a line of conventionally powered cars in the same body-shells as the rotary ones.

Six years after the Cosmo prototype had made its debut, a Mazda rotary’ was again the Tokyo show’ highlight. Mounted on a steel platform, the two-tone RX500 – with matt slate-grey underbody – was similarly styled in-house. The chisel nose with retractable headlights and steeply raked ‘wraparound’ panoramic windscreen looked superbly integrated, but the influences for the Camionnette-style Kamm rear can only be guessed at. Maybe Giotto Bizzarrini’s unique Ferrari 250 SWB conversion featured on the styling studio’s pinboard, or the designers were fans of Captain Scarlet, Gerry Anderson’s TV series. There’s no doubting there’s a strong hint of the Spectrum Patrol Car in the RX500.

Externally, the boldest detail was the stack of multi-coloured tail-lights that conveyed the actions of the driver. Under acceleration, the top light showed green, while at constant cruising speeds the illumination switched to orange. When you braked, a series of red lights of ever- increasing sizes revealed to following cars the strength of retardation.

The crisp, clean design was spoiled only by two large silencers with rectangular outlets and cooling fins that cluttered the dramatic shape. 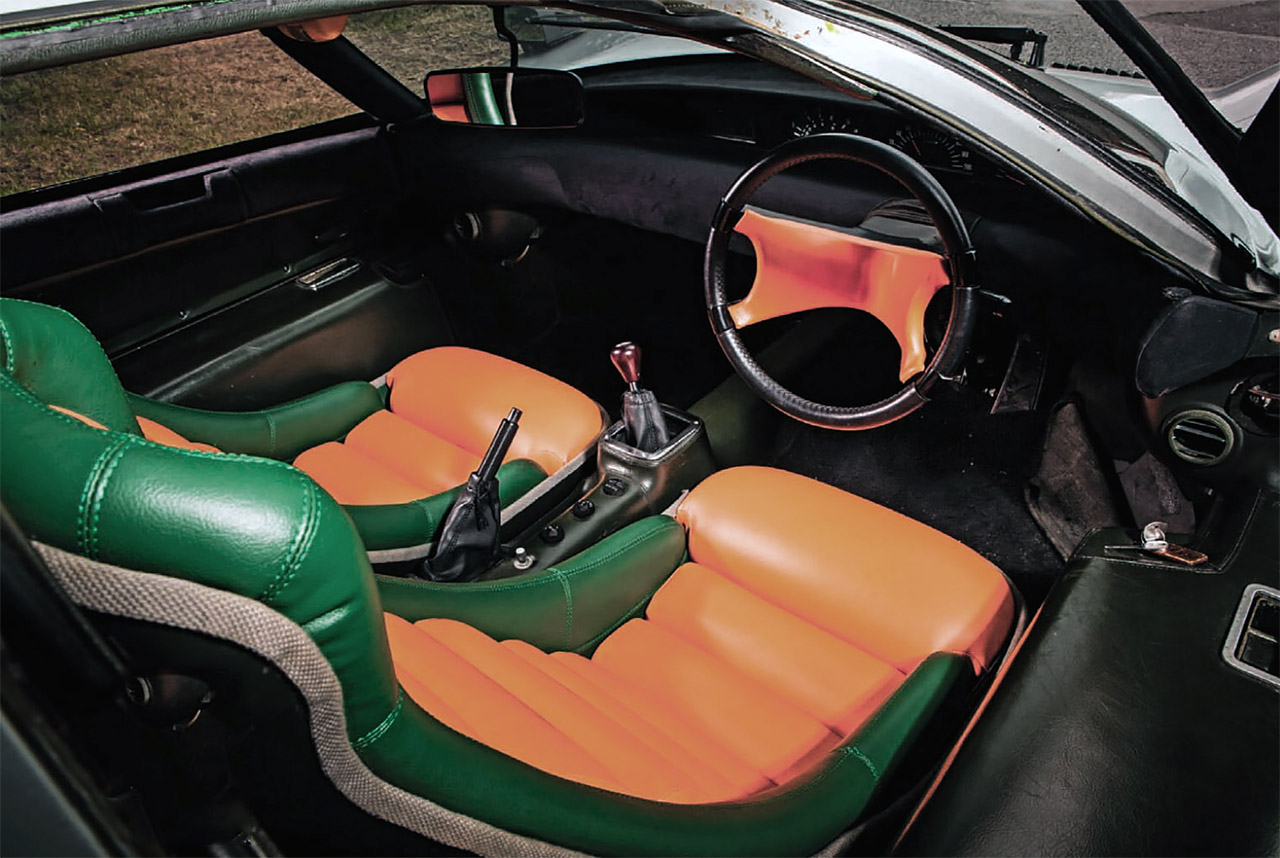 Clockwise, from main: raked-back, hammock- style seats; Type 12 A rotary engine with twin- choke Weber; prominent exhausts; huge single wiper features on well- resolved front; bold badging; novel wheel trims. Three colours were unearthed during the restoration carried out five years ago, but it was decided to preserve the RX500 in its final silver paint scheme rather than the original yellow. 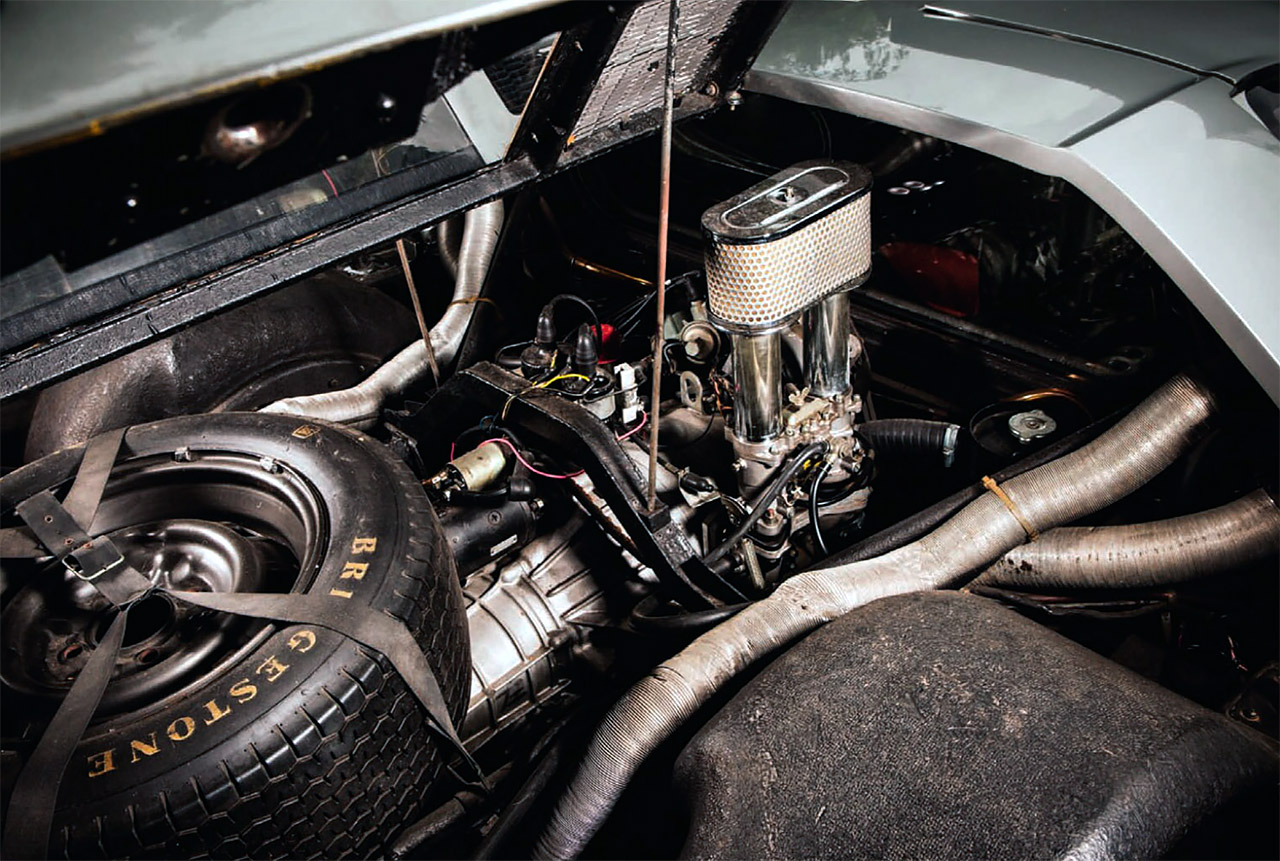 Promoted by the company as a ‘mobile test bed for high-speed safety,’ the RX500 s weight of 850kg (1874lb) was achieved via glassfibre panels on a semi-monocoque platform.

Toy collectors will probably be most familiar with the little-seen RX500 because it became a popular Matchbox subject. Released as number 66, it was remodelled in three colour schemes – orange, red and green – but not the authentic show design. Launched in 1971, the ‘Superfast RX500’ model stayed in production until 1981, when it was reissued in the USA.

Tokyo Show visitors had to strain to see the  real thing’s bold interior because the RX500 was presented within a no-access stand, but occasionally its single-arm, front-hinged ‘butterfly’ doors were opened to reveal a dashboard that matched the exterior and wild seats. Hammock-style, two-tone designs with 10 padded middle sections could have come straight from a Milan furniture show, while deep inside the bulkhead were just three large instruments and minimal warning lights. Ahead of the deeply dished, two-spoke steering wheel, the large black dials included rev counter to 15,000rpm, speedometer to 200 (there is no indication if this is kph or mph), and an AM/FM radio. The centre console, with stubby gearlever, switchgear and high handbrake, looked decidedly conventional in comparison to the other bold details.

Almost lost under the centre-hinged, two-part engine cover is a Type 12 A rotary unit based on the powerplant fitted to the production Capella. Modifications followed the Mazda racing cars, with a twin-choke downdraught Weber and chromed intake trumpets. There was a capacity of 491 cc per crank rotation, and power was an impressive 247bhp. Combined with the light weight, that gave strong performance right up to the sky-high rev limit – Group 5 R100 motors were safely spinning to 9000rpm. The transmission, meanwhile, was derived from the Luce’s front-wheel-drive transaxle.

Like many concepts, the RX500 was then put into storage, but, 39 years after its debut, the car reappeared at the 2009 Tokyo Motor Show. The previous year, Hisahiro Akimasa – curator of the Hiroshima City Transport Museum – had approached Mazda about restoring the old show car and making it a feature display.

Approval was given, and the tatty prototype was moved to a garage in Hiroshima. Many believed that three RX500s were built because pictures reveal a further two colour schemes – green and silver – but during the restoration three different paint layers were discovered. It was decided to preserve the final silver finish, but the mechanicals were rebuilt for demonstrations at events in Japan. The restoration stirred up nostalgia for the 1970 Tokyo sensation, and it recently featured in the PlayStation game Gran Turismo 6.

Interest in the car grew to the point where the RX500 made its first trip outside Japan for July’s Goodwood Festival of Speed, where it was the talking point of the Cartier Style et Luxe. Its fame is deservedly spreading.

To prove its rotary engine development, Mazda quietly planned its debut at Le Mans in 1970 with a Chevron prototype entered by Belgian equipe Team Levi’s International. The link was Yves Deprez, who’d finished fourth co-driving a Cosmo in the 1968 Marathon de la Route.The Belgians idea of fitting a 10A rotary into a Chevron or Lola chassis was given the go-ahead from Japan, and a B16 was eventually acquired in 1970. Testing was carried out at Zolder before Deprez and co-driver Julian Vernaeve made their debut at the Spa 1000km (below) and the Nurburgring 1000km. They finished second in the 2-litre class on both occasions. The rotary had good torque, but lacked the power to battle with the Cosworth- and Porsche-engined rivals. Having to fit a suitably long (2.6m) exhaust in the Chevron caused problems, too.

At Le Mans, the small team had no illusions of success – particularly after qualifying in 41st place, 20 secs slower than the Cosworth Chevrons. It was hoped that the rotary’s strong reliability would play in the team’s favour, but the car retired on lap 19 with overheating issues. Who would have guessed that this fledgling effort would eventually lead to Mazda’s historic 1991 victory with the sensational 700bhp, four-rotor, R26B-engined 787B?