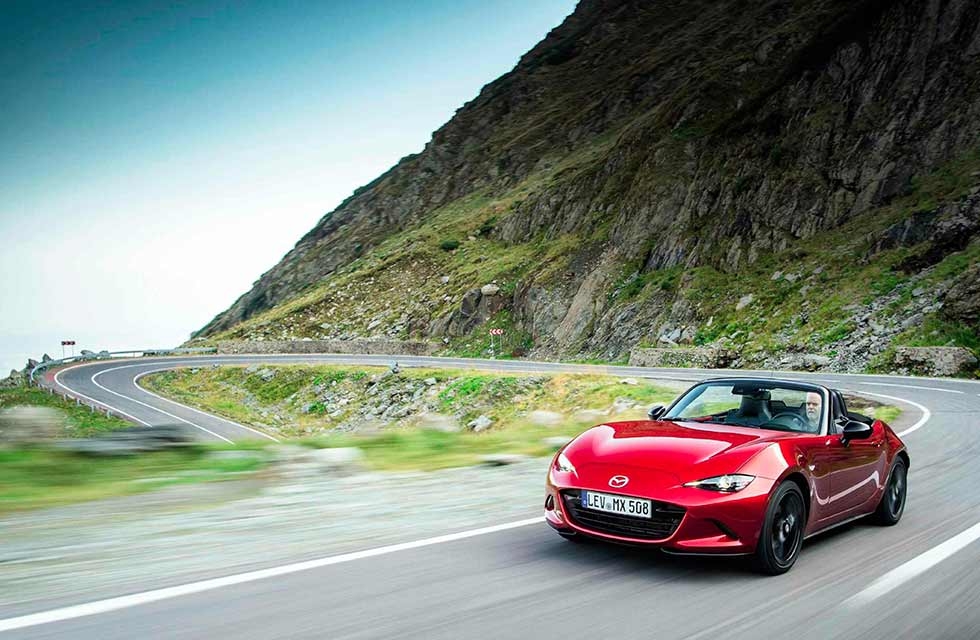 As tales of automotive evolution go, the Mazda MX-5 isn’t quite up there with the Porsche 911 and Chevrolet Corvette, but 29 years and almost 1.1 million sales prove, once again, that the best ideas tend to stick around. This is a mid-term refresh for the fourth-generation run of the much-iterated front-engined, rear-drive, petrol-only two-seater and, although there are numerous tweaks and mods, the big news is 181bhp for the 2-litre version. That’s 23bhp more than before. And you thought the MX-5 was all about feel and finesse.

The car we’re testing here is essentially what will be the SE-L Nav+ model in the UK, which means it doesn’t have the Bilstein dampers and strut brace of the Sport Nav+ and GT Sport Nav+ range-toppers, but does have the limited-slip differential standard on all 2-litre-engined examples. The kerb weight remains appropriately trim at 1030kg, so although 181bhp is far from startling by current hot-hatch standards – there are no power-pumping, torque-swelling turbos in the MX-5 playbook – it’s enough to slice nearly a second from the 0-62mph time, now a more respectable-looking 6.5sec.

There’s a little more breathing space at the top of the rev range, too, the limit raised from 7000 to 7500rpm, which should add a little subjective spice to the stronger-urge. As before, the transmission of choice has to be the sweet-shifting six-speed manual – one of the MX-5’s finest assets – but there is an auto option for the hard-top RF if you insist.

Benefitting from Mazda’s ‘Sky Activ’ tech – which rather than merely adhering to the usual ECU-remap tuning path takes a more nuanced, holistic approach – the 2-litre,four cylinder motor has also had weight shaved from various components to promote pep and boost efficiency beyond that provided by stop/start and braking regen. Included among them are lighter-pistons, conrods and flywheel, and these are joined by a wider-throttle body, expanded port area and larger-bore exhaust valves. Encouragingly, Mazda claims at least 40mpg, however heavy your right foot.

Pure and simple might be the MX-5’s mantra but, as time rolls on, sophistication is creeping in. On the better-equipped versions, lane-departure warning and blind-spot monitoring are something of a novelty. Likewise the optional Apple Car Play display and connectivity hub. Arguably more welcome is a steering wheel that now adjusts for reach (30mm of fore/aft travel) as well as height, making a snug driving position a little more relaxed for the long of limb.

Good seats complement a fine driving position, age-perfected control relationships, spot-on pedal placement and the stubby, super-snappy gear change. And we now have an engine note that sounds better the harder you push it, though below 5000rpm you’d never suspect the blossoming top-end sonics.

With its more muscular motor, it goes well, too. By MX-5 standards, anyway, but you’ll need to use all of the available revs in the intermediate gears if you’re serious about making progress. The mid-range performance is notably stronger than before but doesn’t exactly punch the air from your lungs. Let’s get the reality check out of the way: a well-driven modern hot hatch will still regard a brilliantly driven 181bhp MX-5 as an obstruction.

No matter, if the MX-5 has shown us anything over the years it’s that fun doesn’t have to equate to speed across the ground, and the root-level rewards of a light sports car with the engine in the nose driving the rear wheels and a 50:50 weight distribution can be considerable. A little more grunt to loosen the purchase of the rear tyres does no harm at all and, in this respect, the mechanical LSD is particularly well judged. It requires big throttle, a low gear and exaggerated turn-in to get things moving in the dry, but backing it in isn’t necessary and, with a will to waste the rear rubber, the beefier 2-litre urge could deliver serial mini-drifts all day long.

True, the chassis isn’t a standard-setter for delicacy and precision if your benchmark is something still lighter with the engine in the middle, such as a Lotus Elise, but the Mazda’s balance is superbly and unerringly neutral, its reflexes keen and its body movements well controlled, even if they don’t have the economy of motion of said Lotus. The Bilstein-damped models should get closer. But it feels eager to entertain and quick to forgive, however ambitious the liberty taken. You can hurl the MX-5 at almost any bend, whatever its surface or camber profile, confident in the knowledge that you’ll slither past the apex, if not laughing then with a large grin plastered across your face. Although the helm doesn’t offer the last word in finely resolved feel, it’s meatily weighted, answers inputs alertly and accurately and filters out the rigours of bumpy and poorly surfaced roads with an impressive lack of fuss.

‘It feels eager to entertain and quick to forgive, however ambitious the liberty taken’