Boxy and dated, yet dripping with retro cool, the set-square-styled bodywork of the early Honda Civics is a shape that is rarely seen on our roads anymore. It’s a shame, as the cars look every bit as stylish as their Bavarian cousin of the same period, the Mk1 Golf, especially when lavished with a few choice modifications. Sulayman Ahmed’s example however, has been treated to not just a few modifications, but a full-on performance overhaul in order to create a machine that can not only stick two fingers up at the Veedub boys, but can also show a clean pair of heels to much more modern machinery too.

As a fan of Japanese cars, 30-year old Sulayman (or Sulay for short) has had his fair share of hot Japanese rides, but states that the early ‘80s Civic is the car that tops the lot. “As a car trader, a lot of cars pass through my hands and the few that I like the look of I tend to keep for a while before selling them on,” Sulay explains. “Some I’ve just kept standard, but others I’ve modified with aftermarket parts and even a few engine conversions, however, I always seem to get bored of them and soon move onto the next one.”

All that changed though when he got his hands on this particular car around eight years ago.

“I’d always liked the retro look and old Civics in particular,” he says. “So when I saw a mint example of a super-rare Civic S – thought to be one of only three examples in the UK – driving through the streets of Knutsford, I flagged the owner down and asked him about selling the car. At first he said he hadn’t considered selling it, but then I offered him a price he couldn’t refuse.”

A bank transfer later and the car of Sulay’s dreams was his.

“I think it must have been fate,” he laughs. “When I got the logbook, I noticed that the car was made just three days before I was born!” Like many modifiers before him, Sulay set out to keep the rare ride standard and just enjoy the kudos of driving a cult classic, but all too soon the mods began to creep in. 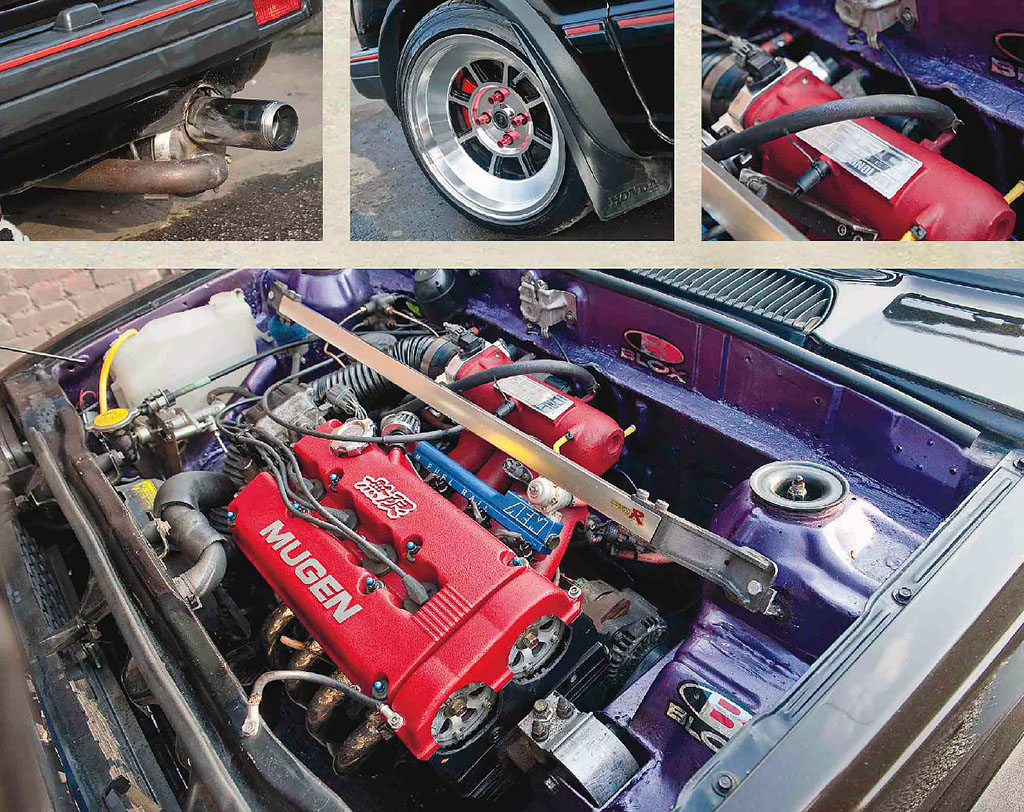 “I started with a set of wide wheels,” recalls Sulay. Giving the little Civic the kind of stanced presence that was so rare on hatches in the ‘80s are a set of 8×15 inch Rota BM8 wheels with mildly stretched 195/45/15 Toyo Proxes T1-R tyres. A retro design that harks back to the motorsport wheels of the ‘80s, but still manages to look fresh and funky today. The Rotas are an excellent choice for the Honda and give it both the widened track and tyre footprint for extra grip and improved handling, but also add a bit of modern day aggression. “Unfortunately, I kept on getting pulled by the police as the extra girth on the wheels poked too far out of the arches. That’s when I decided to add some plastic arch extensions.”

The extra bodywork to shield the wide rubber did its job of placating the Babylon and Sulay could’ve kept it like this quite happily, but the desire was already too strong and he had ideas brewing in his mind that he just couldn’t get rid of.

“I set my heart on doing an engine conversion with the B18C motor from a Honda Integra Type R,” remembers the Manchester-based modifier. “But, not really being that hands-on myself, I did what I usually do and rang around some tuning companies to see if they could help with the swap, unfortunately, I drew a blank.” With none of the usual suspects in the Honda tuning scene willing to take on the project Sulay was despondent; however, his spirits were raised after a chat with his mechanic friend Marek Chrzaszcz.

“Marek is a mobile mechanic in Manchester. I sold him a Lexus IS200 around seven years ago and, as he’s a fan of Japanese performance cars too, we’d kept in touch ever since,” says Sulay. “He’s a really good mechanic and I use him to fi x and maintain a lot of the cars that I sell. I asked him if he would help me do the engine swap as, unlike many of the tuners I spoke to, he has the philosophy that anything is possible. If something doesn’t fit, you make it fi t, simple as that.”

So after a few months of pestering, Marek finally gave in and agreed to help Sulay carry out an engine conversion on the Civic. With the backing of a pro spannerman, Sulay went out and acquired a DC2 Integra Type R, which would be the donor vehicle for many of the parts for the project.

Opening the bonnet, Sulay shows us the fruits of his and Marek’s labour and it’s clear to see that this is no back street lash up. The bright red Mugen rocker cover really stands out in the funky purple bay and a mixture of other JDM brands, such as the DC Sports manifold, Skunk2 Pro intake manifold and vernier adjustable cam gears and AEM fuel rail, show this is a build that’s been taken seriously. “I sold the original 70bhp 1.3-litre motor on a Honda forum to some guy from the ‘States,” says Sulay. “It was low mileage and snapped up fast.”

But before the new motor could be fitted, Marek seam welded the chassis to strengthen it so it could take the increase in torque from the ‘Teg’ lump.

“As no one had done this conversion before, there were no ‘off the shelf’ parts, so we had to make everything ourselves from scratch,” explains Sulay. “The one thing we didn’t do ourselves was the wiring loom, which was custom made by splicing the Integra and Civic looms together and getting rid of the unnecessary wires. For us though, probably the hardest part was fabricating the engine mounts, as the motor is quite tall and needed to be mounted low in the bay, and at the perfect angle to allow the driveshafts to be at the right angle too.”

Sulay reckons he and Marek must’ve had the engine in and out of the bay over 100 times making minor incremental adjustments to get the fi t just right.

“The gearbox is from the donor DC2 as well and uses a Spoon clutch and custom driveshafts with uprated CV joints to deliver the power to the front wheels.”

Although difficult to see unless you really peek through the spokes, behind the wheels is a set of MG ZR 282mm EBC turbo grooved discs with custom mounted Integra callipers and EBC Greenstuff pads, which Sulay says is a great combination that fits perfectly and provides plenty of stopping power for the lightweight Honda, even at full chat.

“When it came to sorting the suspension, again there were no simple solutions, and in the end I spoke to Gaz shocks who said that, if I sent them the original spring and strut combination, they could make me a bespoke set of coilovers,” Sulay says. “The coilovers, along with a full polybush kit, transformed the handling of the car, and helped take some of the weight of the larger engine. However, one of the biggest improvements to the handling was the addition of custom made anti-roll bars.”

The Civic S never came with any form of roll control, so Marek used his welding skills and knocked up some anti-roll bars from scratch, along with some stabiliser bars and modified a pair of DC2 strut braces to fi t.

“The little Civic handles a treat now and, with all the extra power, it really shocks people when I come flying past them,” smiles Sulay. “I love pulling up next to M3s and Porsches and seeing their faces when I smoke them at the lights. I love driving the car hard and do so whenever I can.”

When we ask if he ever worries about breaking his custom creation, Sulay is nonchalant. “If something breaks, we fi x it,” he says. “Through doing this build I’ve learnt a hell of a lot about modifying and tuning cars and it’s been anything but a smooth ride. When we first got the engine in and the car up and running we didn’t realise that when we fitted the adjustable cams, the cam timing was out and ultimately caused the engine to blow. It was an expensive set back, but in the end I just sourced another engine and we went on from then, just this time a little wiser when it came to the setup.”

This newfound knowledge has given Sulay the courage to jump straight into his next project. “The Civic is finished now so I’m just going to enjoy driving it. I may sell a lot of the cars I own, but this one’s a keeper. The new project should be good though too, as again it’s something that’s not been done before, so Marek and I have our work cut out again.” Sulay’s staying tight-lipped about the details of the upcoming build, but says it involves another small ‘90s Honda, turbocharged power and four-wheel drive! We’re betting on a CRX with a Subaru powerplant and running gear, but with Sulay’s wild imagination and Marek’s magic spanners, who knows what the pair can conjure up. But whatever they decide to do next, one thing’s for sure, even if it’s an old dog, it will certainly have some new tricks up its sleeve.