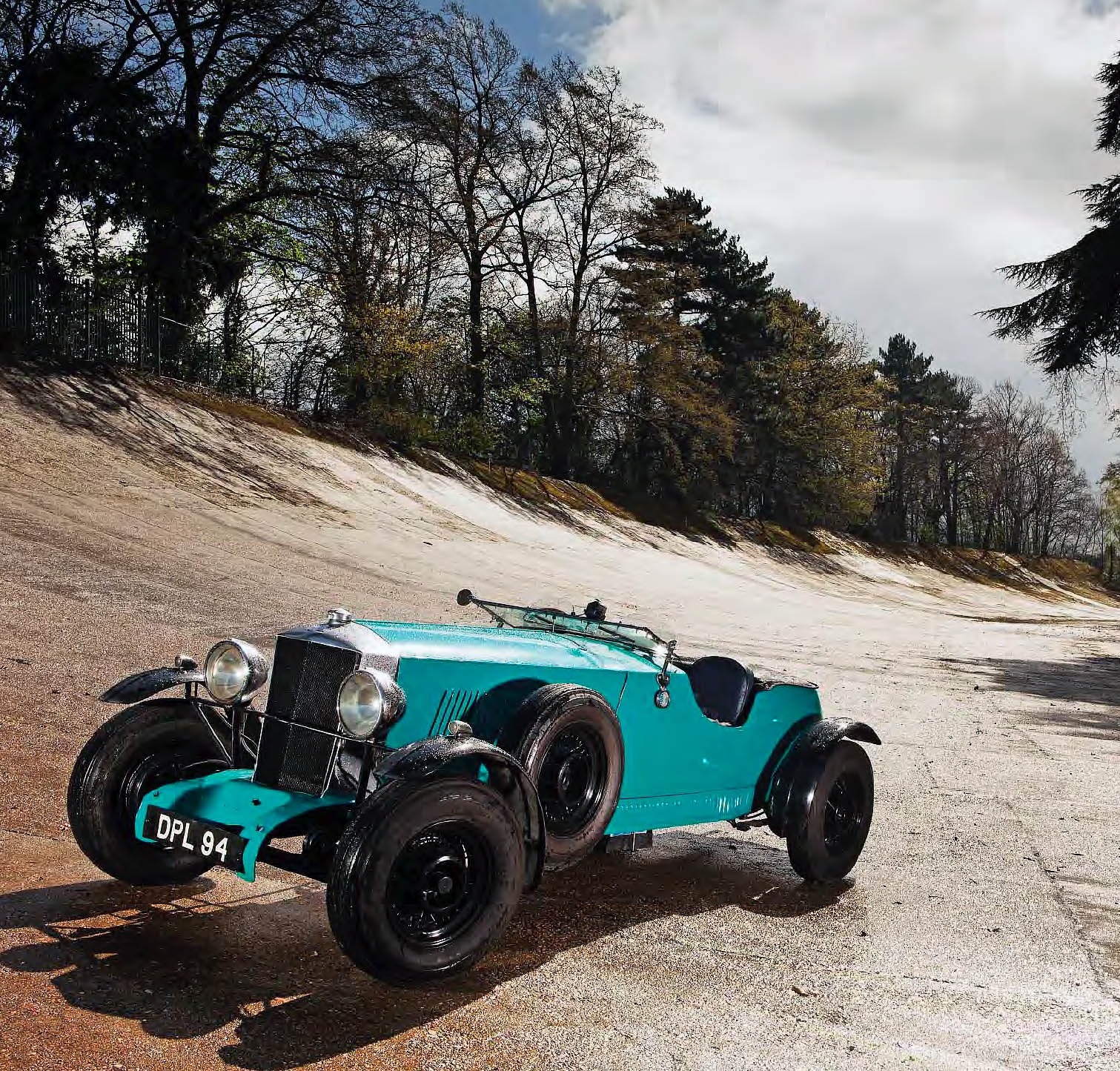 The hot rod from the Home Counties. Thirty years before the Cobra, Railton harnessed. American power to create its own roadgoing racer. James Page drives an ultra-rare LST, photography Tony Baker. The idea behind the Railton Light Sports Tourer is simple: extract performance by dropping a big, powerful engine into a lightweight design. It’s a method that manufacturers have used throughout motoring history, but in this case the results are particularly impressive. In its day, the LST left road-testers struggling for superlatives, and even now it offers a startling turn of speed. Yet, for a long time, it was all but dismissed as a crude hybrid of American brute force and English know-how.

Railton was the brainchild of Noel Macklin, who had previously established the Invicta marque on premises within the grounds of his home in Cobham, Surrey. The most powerful Invictas used the 4½-litre straight-six Meadows engine and could reach 100mph. They were successful in competition, with Donald Healey winning the 1931 Rallye Monte-Carlo and Tommy Wisdom that year’s Ards TT, but hugely expensive to produce. With Invicta sales falling away and the business failing, Macklin looked towards building a more ‘off the shelf’ sports car.

He settled upon Hudson’s Terraplane as the basis for his latest venture. The Detroit-based firm also had a factory in Canada that built right-hand-drive models, plus an assembly plant in London that had originally been established to produce cars for subsidiary brand Essex.

Macklin obtained a chassis on which to start development, with subsequent kits being delivered direct to Cobham from Canada. The Terraplane frame was noted for being stiff and light, but that didn’t stop Macklin embarking on a programme of modifications.

He was assisted by engineer Reid Railton, who was in the midst of a busy few years during which he would have a hand in the Bluebird Land Speed Record cars, John Cobb’s fearsome Napier-Railton – which would go on to claim the Outer Circuit lap record at Brooklands – and the new line of voiturette single-seaters from ERA. Such was Railton’s involvement that he agreed to lend his name to Macklin’s project.

The first Railton-Terraplane appeared in July 1933, and was fitted with a Ranalah touring body. All of Macklin’s main goals seemed to have been achieved: the car received positive reviews for its acceleration and 90mph top speed, and it cost less than £500. In due course, it also became available as a drophead coupé and a saloon. The ‘Terraplane’ part of the name was dropped in 1934, when Macklin switched to using the major components from the Hudson 8 Challenger instead. Engine capacity increased slightly to 4168cc, and the new powerplant gave 113bhp.

The cars were frequently seen being used in competition: journalist and former Bentley Boy SCH ‘Sammy’ Davis drove a tourer in the 1934 Rallye Monte-Carlo and, at that year’s Brighton Speed Trials, Railtons took second place in both the unlimited and open classes. Production peaked the following year, with 377 cars built using the Hudson Series 54 chassis. A greater variety of body styles was offered, too, including three tourers and two coupés.

While standard cars satisfied Macklin’s vision for what he wanted Railton to be, there was the temptation to go further still. The Light Sports Tourer was therefore developed throughout 1935. Although the basic chassis remained the same, the engine and gearbox were moved back by six inches to improve the weight distribution.

Higher-ratio Marles steering gear was fitted, twin shock absorbers were employed at each corner and there were improvements to the brakes via bigger drums. A 3.3:1 final drive was used and the engine’s compression ratio was raised to 7.75:1, with a Zenith carburettor in place of the standard Carter. 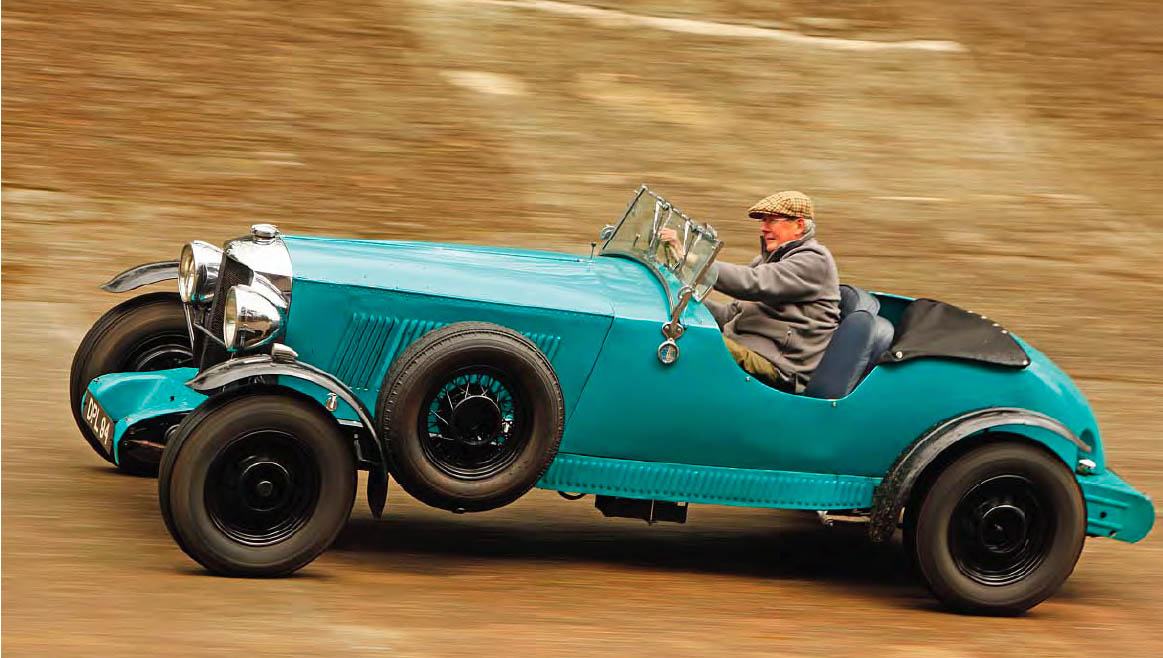 You can forget about the lower ratios unless you want to show off.

Perhaps more important than these mechanical tweaks, however, were the changes to the bodywork, which was produced by EJ Newns of Thames Ditton. The all-aluminium design complied with sporting regulations by having room for four people, but weighed just 50kg – or 1cwt, in old money. The whole car tipped the scales at only 19cwt (965kg). By way of comparison, the contemporary 4½-litre Lagonda weighed more than 33cwt. There were no compromises in this new model’s design: the headlamps, for example, were situated low and close together to help reduce drag.

The LST wasn’t exactly at the cutting edge of technology – The Autocar later remarked on the old-fashioned splash-feed method of lubricating the engine’s big-ends – but it was undeniably effective. The 0-60mph dash took a scant 9.8 secs, and 90mph was reached in less than 30 secs. By removing the wings and headlamps, The Motor managed a top speed of 107mph and a standingstart quarter-mile in 17.4 secs. The Autocar lapped Brooklands at 96.71mph, and provided most people’s lasting image of the LST. The chief road-tester, HS Linfield, climbed the Surrey circuit’s Test Hill and, with a pipe resolutely sticking out of his mouth, the Railton was photographed cresting the rise with all four wheels well clear of the ground. In fact, it apparently remained airborne for 35 feet before crashing back to earth. How Linfield then managed to get it stopped before dropping on to the Members’ Banking isn’t recorded.

Sadly, only two LSTs were built. The roadtest model was registered DPA 231 and was raced in period by Charles Follett, who further modified the car and lapped Brooklands in it at 112mph. He also took Fastest Time of the Day at the Brighton Speed Trials in 1938, and set the sports car record at Shelsley Walsh hillclimb.

That LST now resides in New Zealand. ‘Our’ car, registered DPL 94, was bought new by JF Kingston Whittaker, who initially ran it in bare aluminium before deciding to paint it. Kingston Whittaker used the LST for rallying either side of the war, notable results including a sixth place on the 1937 RAC Rally. He kept the car until 1962, when it was bought by James Hide, who paid the princely sum of £250 for it.

Hide even used the Railton as his wedding car in 1965, and still owns it today. Having been driven regularly throughout the 1960s, DPL 94 was put into storage as family and business commitments began to monopolise Hide’s time. It wasn’t until members of the Railton Owners’ Club, who had been trying to trace the car, knocked on his door that Hide realized its significance. More and more enthusiasts then dropped in, wanting to measure up the rare original so that they could produce replicas.

In the mid-1970s, Hide decided to treat the car to a restoration. The engine was removed and sent to a firm near Chester for a complete overhaul, but the aluminium body proved to be a stumbling block and work soon ground to a halt. The project was only revived in 1993, when Geoff Moore took it on. As well having a number of rebuilds under his belt, Moore was a longstanding club member and, indeed, he remains its spares registrar. He was therefore well placed to return the LST to the road.

The Railton was given a chassis-up rebuild at Moore’s Builth Wells premises. As far as possible, the original material was retained but, despite Moore’s best efforts, some of the aluminium panels needed to be replaced. With the major work done, the car was returned to Hide’s Lancashire base for the final touches to be carried out, such as upholstery and chromework.

It was finally ready in 2001 and, in a nice example of things coming full circle, it served as a wedding car for Hide’s son Charles in 2011. Trying to get a bride into the LST must have been interesting, for it’s not the work of a moment even in everyday attire. The bodywork features no doors, although the sides are cut away in order to make things a little easier. You find a foothold on the chassis then swing up into the cockpit. The driving position is good, with the notable exception of the pedals being very close together. Narrow shoes are a must. Inside, it’s stripped-back and basic, as befits its lightweight ethos. The only trim is that found on the seats and ahead are two aeroscreens; the fullwidth windscreen can be folded flat against the scuttle. Hide is not afraid of using the Railton as intended and everything, therefore, has just the right amount of patina. This is not a machine that would be at home as a pristine show car.

The 4.2-litre Hudson straight-eight engine gives a loud bark as it starts, a raucous noise that is amplified on DPL 94 by the presence of the optional Brooklands exhaust, which doesn’t offer a great deal in the way of silencing. First gear in the three-speed ’box is positioned back and to the left, with second being up and to the right and top gear straight back from there. Much was made in contemporary reports of the Railton’s flexibility and, once the external fly-off handbrake has been released and you’re barely above walking speed, you can largely forget about the lower ratios unless you really want to show off.

First is, after all, good for 54mph. The performance is phenomenal, and the feeling of speed only enhanced by that crisp engine note. The lack of weight immediately makes itself obvious as the LST leaps forward.

The Autocar wrote that: ‘It responds to the throttle in a way that suggests at once the genuine racing car, and not a touring or sports car at all.’ There’s certainly no hesitation in the way it picks up, offering truly impressive straight-line speed.

While it’s fun to drive it like this, double-declutching through the ’box and using plenty of revs, the surfeit of torque means that you can also pootle around in top gear without so much as a cough from the big straight-eight when you prod the centre throttle.

The brakes are strong, too, once you accept that they do almost nothing for 90% of the pedal’s travel. A firm shove will bring the speed down, though, and heaving on the handbrake helps if you really get into trouble.

With its ‘borrowed’ underpinnings and back to-basics construction, you could never describe the Light Sports Tourer as refined, but that wasn’t Macklin’s intention. And it is enormously good fun, providing the sort of exhilaration that you’d expect from a competition car rather than a roadgoing model. “Purists looked down on it at one time,” says Hide, “but I’ve had loads of people offering to buy it over the years. It just gives me a great thrill to drive it.”