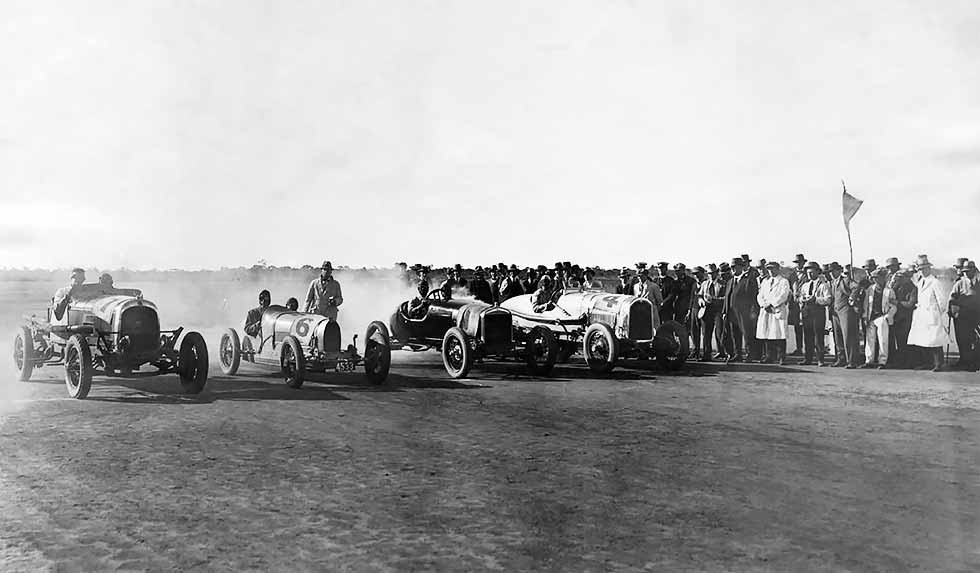 Only seven years after the Australian-born Napier driver Selwyn Francis Edge set a 24-hour record at the world’s first purpose-built motor-racing circuit, the sport had reached the furthest outback of Australia. The Lake Perkolilli race track was about as far away from Brooklands as it could be. From Perth, the capital city of the state of Western Australia, intrepid drivers and riders drove east for 600km to the gold-mining town of Kalgoorlie, home of the famed ‘Golden Mile’ – the richest patch of gold-laden rock in the world. Then they headed north of the town another 30km to a parched, dry claypan.

It was here that motor racing in its purest form was conducted from 1914 until 1939. Anything with an engine was welcome. The motorcycles were initially fastest, although a Sunbeam that was owned by a mining firm connected with Herbert Hoover, who would later become US president, topped the maiden season of car racing. The first man to exceed the magic 100mph mark on the claypan was legendary WA pilot Harry ‘Cannonball’ Baker, who achieved that feat in 1927 on his 1000cc Brough Superior.

What made Lake Perkolilli such an exceptional venue? The roads of Western Australia were terrible in those days – they were more like cart tracks. At Lake Perkolilli, however, speeds well beyond the capacity of the machines were possible. The surface was smooth, flat and hard. Perhaps its only drawback was the layout – a two-mile unbanked circle that, by the 1930s, had become the greatest limitation. Tyres could not grip through the constant turn.

The 1920s were the venue’s heyday. Australians had a penchant for large-capacity, reliable American cars that could cope with the long distances and the poor roads. These proved to be ideal basis for high-speed racing once they’d been stripped and made into specials.

The claypan enjoyed a leap in worldwide interest in August 1927. The local Chrysler dealer purchased Norman ‘Wizard’ Smith’s 24-hour record-breaking example from Sydney and broke the record that had been set at Maroubra Bowl in Sydney by a Vauxhall 14-40. They covered 1607.78 miles in 24 hours.

Chrysler Motors publicised the feat internationally, claiming it as the fastest time ever set on an unbanked natural-surface track. The record did not last long – Wizard Smith drove from Sydney and set a new benchmark on the claypan of 1701 miles in 24 hours with a Studebaker, but not before the Chrysler beat a Bugatti to win the local Perkolilli championship.

The aforementioned dealer – Billy Atwood – and his driver Arthur Colliver returned in 1928 to win the Australasian Championship with a new iteration of the Chrysler with a streamlined body. The following year, they were eclipsed by a straight-eight Auburn boat-tail speedster that had been stripped for racing.

Speeds at Perkolilli increased to beyond 160kph during the 1930s. Ossis Cranston – who first raced a Ford Model T speedster called Heza Henry and then a Model A called Cactus – developed a Ford V8 as the dominant racing car in the state. He took his fabric-bodied two-seater to the Australian GP in 1937 – at Victor Harbour in South Australia – and recorded fastest time, although unfortunately he was less successful in the handicap contest.

The writing was on the wall for Perkolilli when the first around-the-houses motor races were held in Albany on the south coast. Motor racing was being brought to the people rather than the people to the motor racing. Petrol rationing in 1939 brought an end to motorsport and after the war an ex-military aerodrome near Perth replaced the claypan.

It has never been entirely forgotten, though. From time to time over the past two decades, vintage sports-car racers have returned to ‘Perko’. Just like the teams of 100 years ago would have done, they camp in the bush surrounding the dry lake and try out their cars, pushing them as fast as they can go.

There are few other race circuits in the world that are exactly the same as they were 100 years ago. The allure of racing at Lake Perkolilli – the great adventure of it all – is still the same. Put the pedal down and see whether the driver or the machine will falter first. 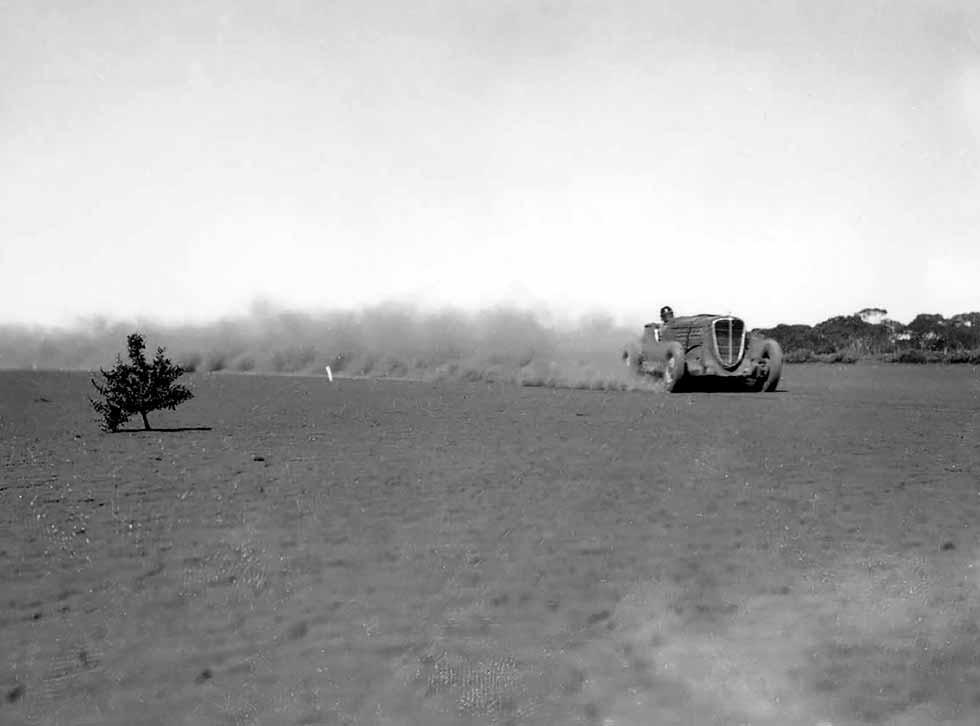 Neil Baird’s Hudson Terraplane kicks up the dust during a 1937 record run. He clocked up 88 miles in the hour.

Left: Ray Charman’s practical but somewhat basic transporter in 1924, complete with Harley- Davidson and Sunbeam racing motorcycles. Below, left to right: Billy Atwood’s much-modified Chrysler returned to the claypan in 1928; Peter Briggs ran the fantastic Napier L48 in 2007, when it was timed at 160kph. 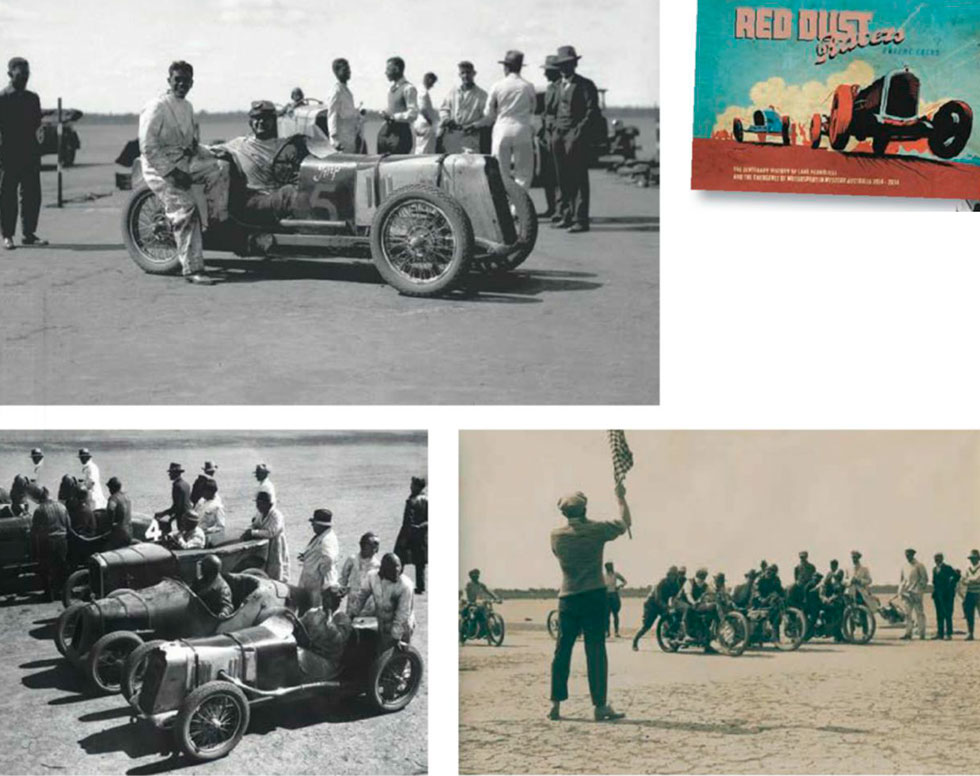 Left: Eric Armstrong’s supercharged Triumph Imp was a regular winner at Lake Perkolilli throughout the early 1930s. Below, left to right: Armstrong lines up with Horan’s Salmson San Sebastian and the Austins of Chick and Baird; 1925 10-mile 600cc race, won by Gus Clifton (centre). 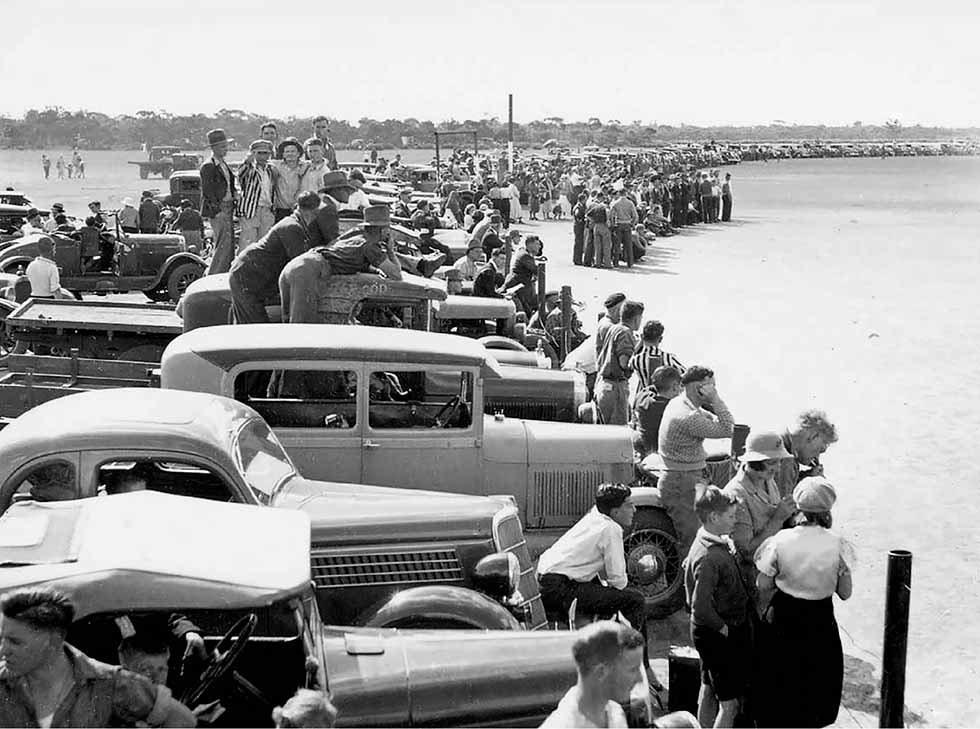