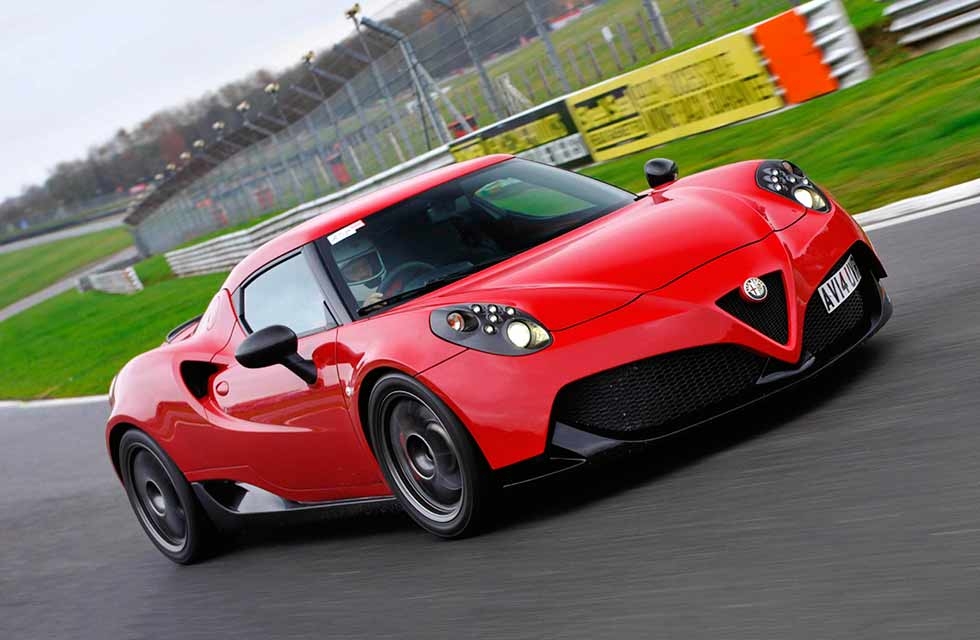 HOW DOES THIS 350HP ALFA ROMEO 4C PERFORM ON TRACK?

Never has the phrase ‘drive to the conditions’ been more appropriate. Brands Hatch has a sheen of bitter dampness across it that simply is refusing to budge. Your local ice rink probably has more grip than Brands today. And our companion for these treacherous conditions? A highly tuned, lightened Alfa Romeo 4C, whose builder – Jamie Porter of AlfaWorks – has issued us with stern instructions to “keep it on the black stuff”.

“I engage ‘Dynamic’ mode on the Alfa’s DNA knob, telling myself that will probably be OK. Mistake! ”

OK then, I’m prepared for the challenge. Er… not quite. Nothing has prepared me for just how awful the surface is. There is no grip here. Turning into Druids bend at what seems an ultra-gentle pace, the rear end starts to step out. Wow. OK, let it ease itself back into line. Pussyfoot the throttle, spot the apex, feed the power in… it’s gone again! The rear end is twitching more than Herbert Lom’s tick in The Pink Panther. And this after I’ve left it till mid-morning for the track to dry out slightly…

Hang on. Let’s pause. Rather like the back end of this feisty Alfa, I’m getting ahead of myself. Let’s rewind to the reason why we’re at Brands in the first place. That’s simple: since we last drove the AlfaWorks 4C on Cambridgeshire B-roads three years ago, there have been quite a few updates.

Perhaps the most important single item is the new bespoke ECU. It’s been developed because it was becoming difficult for the standard ECU to cope with the increasing power of AlfaWorks’ mods – the engine and gearbox ECUs talk to each other and there was something of a communication breakdown. The new ECU is capable of ignoring the signal from the gearbox ECU, so that any amount of turbo boost can now be dialled in. Jointly developed with Norfolk-based power electronics specialists, SCS Delta (www.scsdelta. co.uk), the ECU took quite some finessing. You see, it’s not only the gearbox ECU that the engine talks to, but also the electronics in the brakes, traction control and dashboard. In fact, the new ECU represents six months’ worth of work.

On Jamie’s 4C is a Helmholtz exhaust, fitted because he was tired of the droning noise from the original exhaust at 80mph-ish. This straight-through system uses a special resonator to remove this drone, with two different diameter pipes to produce a sound with much more depth than Alfa’s own race exhaust. At idle, it sounds burbly and purposeful, in contrast to the standard system’s rather flat note. It comes with carbon tips, too, which can be angled as desired. The Helmholtz resonator can be removed easily if, for instance, you want to fit a fruitier-sounding pipe. Weighing 6kg, it adds only 1.5kg to Alfa’s race system.

Speaking of weight, there’s plenty of carbonfibre bodywork on the car now. The side skirts are carbon; the nearside one with an air intake for gearbox cooling, the offside one a cold air intake for the engine. The bumpers are carbon as well. It’s no surprise that the extensive carbon goodies have reduced the weight by some margin – around 20kg in total – and even more if you include the lighter OZ Racing wheels (17-inch front, 18-inch rear).

The last time we visited AlfaWorks, the 4C engine was making 280hp. In the spec in which we tested the car today, with its new hybrid turbo in place, it makes fully 348hp on the dyno. More power and less weight a very quick machine doth make. Jamie says it’ll do the quarter-mile in around 12 seconds, with a terminal velocity of 117mph. I’ll get to how fast it is on track in just a minute.

Because there are many more mods to report on. The new ECU means the gearchange is now sharper, as is the throttle response. There’s also a new gearbox oil cooler to keep temps down (price: £800 plus VAT). Chassis-wise, first up are new dampers. Having tried Öhlins and Intrax systems, Jamie has plumped for Nitron race-spec single-way adjustable dampers (price: £2295 plus VAT). “I have great respect for Nitron,” says Jamie. “They always have time for you and their stuff is not only good value but perfect for the 4C.”

The front geometry is new, increasing the camber and altering the caster slightly. Since semi-slick tyres are fitted, the front suspension is rose-jointed, with cross-axis joints on the front upper and lower wishbones and the rear wishbones (price: £480 plus VAT). That means that pretty much all rubber has been eliminated from the Alfa’s suspension set-up (in fact, there is one piece of rubber left, on the top mount of the rear dampers).

The removal of rear-wheel steer also helps when fitting stickier tyres to the rear. Jamie found that the car was understeering and becoming more unpredictable. The stickier tyres in question are Toyo Proxes R888Rs, the legendary rubber that’s beloved of track day enthusiasts because their semi-slick tread pattern delivers such epic grip in the dry, while remaining road-legal. Simply drive the car to the track, enjoy near-race levels of grip, and pootle home again.

That’s what’s happened today. The 4C has been driven down to Brands Hatch from AlfaWorks HQ in Royston – no trailers, thanks. Trouble is, that light rain I mentioned earlier has resulted in a track surface that’s on the treacherous side of slippery. The briefing instructor tells us that one spin will be overlooked, but a second will result in the day ending for the culprit. (That rule is quickly revised, however, as droves of cars start to pirouette and there are even a few ‘offs’.) It’s my mission not to spin. As I head out on to the track, ‘Race’ mode – where pretty much every assistance aid is switched off – is obviously out of the question. I engage ‘Dynamic’ mode on the Alfa’s DNA knob, telling myself that will probably be OK. Mistake! On its 215/45 ZR17 front and 235/40 ZR18 rear Toyo R888Rs, things are much more ‘dynamic’ than I’d expected. There appears to be zero grip, and even at what seem like namby-pamby speeds, the squirming is uncomfortable to say the least. It would have been easier to run on a full-wet track than this unpredictable, ice-like surface. What a shame the track conditions are so atrocious, as I’m not getting the experience I’d dearly wanted.

Luckily, the Alfa Romeo racing legend that is Ted Pearson is with us, and he’s keen to try the 4C, too, and I call shotgun. Ted sensibly switches the DNA controller to ‘A’ for All-weather – and Brands Hatch is certainly throwing all weathers at us today – but even so the twitchiness is very much still there. Ted says he prefers driving with no aids at all in conditions like these, but on semi-slick rubber designed for dry tarmac, there really isn’t much choice. The lack of grip is most noticeable at Clearways, which doesn’t dry out for the entire day. Here, as you give the throttle full beans on to the main straight, the back end moves – quick dab of opposite lock – then moves again – more oppo – then again, and again. Yes, four ‘moments’ in one corner! But, I have to say, Ted demonstrates that it’s all easily controllable if you have sharp responses. That’s proof enough for me that the chassis set-up works. In the dry, I have no doubt that the 4C would be one of the quickest road-legal cars on the track.

There’s one area in which the 4C is invincible, even in today’s conditions. That comes just after the final kick of oversteer out of Clearways. As soon as you’re on the straight, the 4C just leaves every other car for dead. That near-350hp power output and even lighter kerb weight mean it just catapults it down the tarmac. It’s deceptively fast, as ever.

Then, when you arrive at Paddock Hill bend and some brakes are required, the 4C delivers again, thanks to another area of upgrade, although only slight: Ferodo DS2500 pads are fitted all round.

We’ve driven this 4C on a ‘snapshot’ day. This is a project that’s always in development, never standing still. Jamie has more plans, of course: a full race ECU, twin-scroll turbo, tubular manifold and 100-cell catalyst. Result? The 4C should develop an easy 400hp. Oh, and then there’s his plan to take the 1742cc engine out to 2.0 litres, done by increasing the stroke. Jamie noticed that the 4C engine’s 93mm bore is shared with the 916 GTV unit, so by using the 916 crank the engine can be taken out to 2.0 litres. It will, however, need a modified crankcase.

So I’m already concocting several reasons to revisit the AlfaWorks 4C in the future. One, because it’s such a dynamic, ever-changing project. And two, because we want to see what it’s capable of on a dry track that doesn’t spit you out like a pellet. 400hp plus in the dry? Yes please.

Also at our Brands Hatch track day is Christian Bridgland, the joint owner (with his brother) of this black 2014 4C. Remarkably, the car’s odometer turned 89,000 on this very track day. Yes, this is Christian’s everyday car, used in all conditions – even ones far worse than today. The car is virtually standard, with only an AlfaWorks race ECU (pushing power up 300hp), K&N filter, Samco hoses and uprated brake pads and lines.

We quizzed Christian on what the 4C is like to run as an everyday machine. “It’s brilliant,” he smiles. “It’s actually very cheap to run. It did need a clutch at 76,000 miles, which was a big job, requiring the wing, bumper, engine and gearbox to be taken out. I’ve sampled lots of tyres but the best are Michelin Pilot Sport 4s. On the right tyres, I love driving it in the snow!”

Having enjoyed a few laps at Brands Hatch in Christian’s car, it’s great to be able to report that, with a completely standard chassis, the 4C is absolutely in its element on the track. In the company of some serious machinery, only Caterhams were cornering quicker on the day. Which confirms the theory that track driving is what the 4C was developed to deliver – and deliver it certainly does.