Is a stripped-out, manual-only Porsche 911R on its way? Porsche gets dragged in to the diesel scandal, record sales figures, plus new Macan GTS and Porsche wins the WEC. Low-volume special to get GT3 engine and manual ‘box for maximum involvement.

It’s the rumour that just won’t die. Now we have the images to prove it’s really happening. Porsche is prepping a manual-only 911 for purists and it will likely be known as the 911R. The last 911 to carry the 911R moniker was the ultra-rare and ultra-light competition car of 1967.

Nothing is official at this stage. But the basic outline of the new model is taking shape. Based on the narrow body 991-series shell as opposed to the wide body alternative, the early development mule seen here sports 991 GT3 bumpers and wheels, the latter complete with centrelock hubs. It’s not clear if the new model is part of the outgoing first-generation 991 family or if it will acquire some or all of the cosmetic and technical tweaks from the recently updated second-generation 991.

Either way, underneath there’s thought to be a derivation of the high-revving atmospheric engine found in the 991 GT3 and GT3 RS models. Whether it’s in 3.8-litre or 4.0-litre trim and knocking out the same power or somehow retuned isn’t certain. But the smart money is on a slightly detuned 3.8 from the GT3 with roughly 450hp. What these images do prove, however, is that the aero concept for this modern-day 911R is distinct from the GT3 models.

Immediately apparent is the removal of the GT3’s signature rear wing. Less obvious but every bit as significant is the presence of an aerodynamic diffuser under the rear of the car. Historically, the 911’s rear engine location has made the use of diffusers tricky. So it will be interesting to have a closer look at how Porsche has leaped that technical hurdle.

Whatever shape the diffuser finally takes, it’ll be a first on any series-production and road-legal 911 and indicates that maintaining downforce and, in turn, high performance and grip levels are at least part of the new 911R package. The production version may also sport a ducktail spoiler as opposed to the standard 991 flip-up wing seen here.

Elsewhere, highlights are thought to include the aforementioned manual-only transmission option along with what are said to be slightly smaller tyres than the GT3. The significance of the latter point involves more accessible limits and a playful balance in contrast to the outright grip-maximisation and lap time-optimisation of the latest GT3 models. Though the ‘R’ will clearly be an extremely rapid car, it will also be as much about involvement as pure speed.

With that in mind, it will be intriguing to see how many of the 991’s high-tech driver aids, such as rear-wheel steering, find their way into the new model. But it is thought weight loss measures including a significantly stripped out and simplified cabin will be part of the package.

In the current market context of soaring Porsche values and with models such as the new GT3 RS and GT4 changing hands for significant premiums over list pricing, however, arguably the most critical unknowns may actually involve dealer allocations and pricing. Again, nothing is official, but suggestions of extremely low production numbers including UK allocations as low as 20 have been rumoured. If that’s the case, then reports of pricing roughly in the same ballpark as the GT3 and GT3 RS models – or perhaps even higher – are probably academic. All will already be spoken for.

That would obviously be a pity, the mere existence of such a special model makes the Porsche ecosystem more interesting and is worth celebrating. Moreover, along with the recent Cayman GT4, Boxster Spyder and GT3 RS models, the new 911R surely bodes well regarding Porsche’s future commitment to creating full-on sports cars for enthusiasts. Shame, though, that they have to be quite so rarefied and in such short supply. Time for a lightweight entry level model? We think so.

Proof that a 911R, with manual gearbox, is on the way? It would appear so. Expect something even more stripped out than a GT3, less in the way of gizmos and electronics and smaller wheels and tyres.

Top: Look closely and this prototype appears to be sporting some sort of rear diffuser, perhaps in place of a rear wing. Will be interesting to see how Porsche makes that work. Right: The original 911R packed a 210bhp punch from 2-litres and weighed well under 1000kg.

‘R’ WAS FOR RACING

As exciting as the new ‘R’ undoubtedly is, it’s not quite the same bare-bones purist proposition as the original Porsche 911R of 1967. That car took light-weight engineering to the absolute limit. Every possible component was lightened, including body panels fabricated in glassfibre. Factor in the stripped-out interior and the net result was just 830kg, over 200kg less than the already diminutive standard 911 of the day. 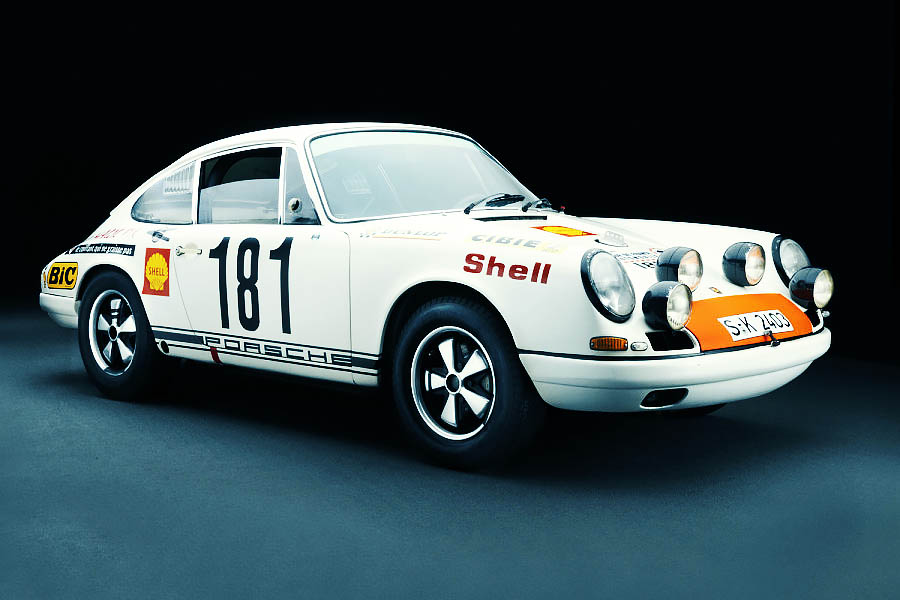 Engine-wise, a number of units were used in the 1967 911R, the most common offering 210hp. If that doesn’t sound dramatic, the engine capacity was just 2.0-litres, which makes for a thoroughly exotic specific output, especially for 1967. With a kerb weight well under 1000kg, the power-to-weight ratio looks thoroughly modern, too. The 1967 R was, of course, a pure racer. But homologation problems meant it never qualified for the sports car racing classes for which it was designed, forcing it to take on monsters like the Ford GT40 in the prototype class. All told, just four prototypes and 19 customer cars were built. So while the new 911R might be low-volume by modern standards, odds are it won’t be nearly as rare nor quite as single minded as the spectacular original from the 1960s.