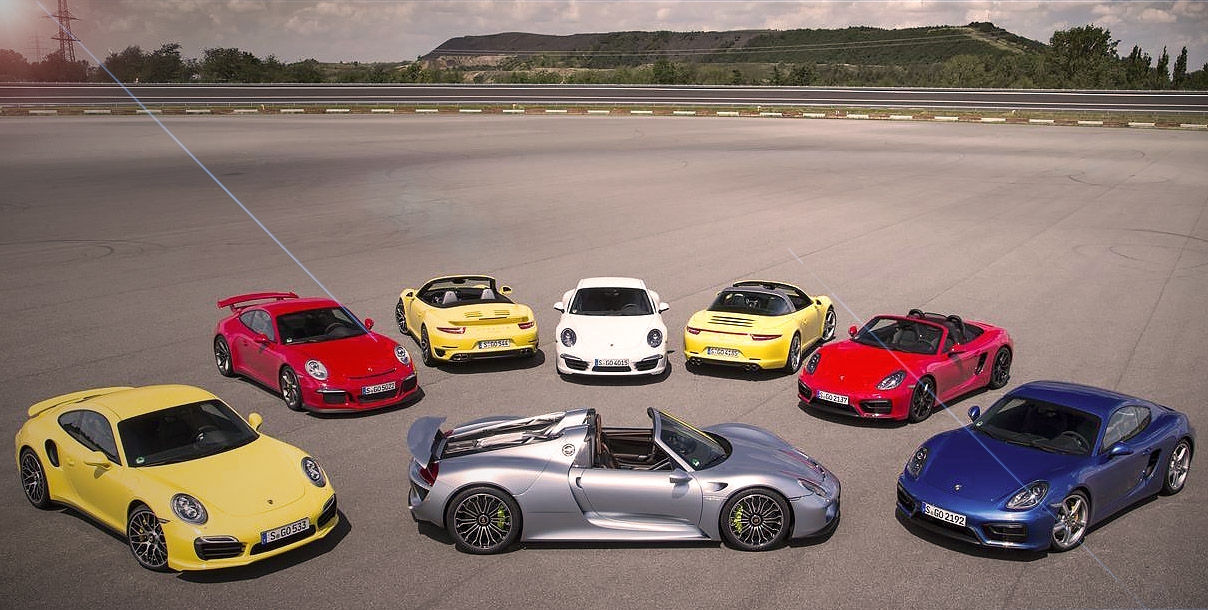 Usual Suspects. Dep Ed, Fraser, gets the full on Porsche driving experience in the full gamut of Porsche’s sporting Machinery, talks tech and electronics with engineers and rides hotshoe in the 918. All in a day’s work!

Are friends electric? (and electrics our friends?)

Macan. Cayenne. Panamera. Hybrid. Improved economy. Lower emissions. Soaring sales. Everincreasing profits. Yep, there’s plenty going on at Porsche these days. But you get the impression that the type of cars that got most of us first interested in the marque are being overshadowed by the forces of marketing, legislation and volume sales.

And that’s something that appears to be exorcising certain factions within Porsche, too. Which may explain why Porsche recently organised a little outing for selected members of the press to ram home the idea that the company does still make pukka sports cars and bloody good ones, at that. Not that we’ve forgotten – certainly not on a magazine called 911-Drive-MY club – but, from Porsche’s perspective, just in case we have an iota of doubt that the company remains true to its traditional core values.

So, we were to be immersed in the ‘Porsche Experience’. An experience involving cars no more than chest-high. And where fourwheel drive was to be found only in conjunction with a 911 badge or, in a slightly different sort of allwheel propulsion, one reading 918 Spyder. To ensure we could go slightly nuts behind the wheel without putting ourselves, the general public, the cars or our licences in jeopardy, Porsche opened the gates to its bijou Aldenhoven Testing Centre on the edge of Düsseldorf.

First, though, a night in the Inside by Meliá Düsseldorf Hafen hotel, a multi-coloured tower of trendy accommodation on the banks of the Rhine, and tucked into the city’s lively ‘Media Harbour’ district: a cool hotel and doubtless chosen to subliminally reinforce the notion that, for all its history, Porsche is a modern car maker.

The vista from the hotel’s 16th floor Skybar was breathtaking on a clear summer’s night, but even more enthralling was an overdinner conversation with Eberhard Armbrust, a long-time chassis engineer for Porsche and now Manager of Vehicle Dynamics. When I asked him about the proliferation of electronics these days for controlling every aspect of a car’s dynamics, he seemed genuinely excited by the level of precision and degree of flexibility that having computer-controlled components allows. Reading between the lines of his slightly corporate response to an enquiry about the feel of electric power steering, however, he conceded that it’s less than perfect, but worth the compromise for the advantages in weight saving and fuel economy: these are things that today’s car engineers have to take into account, he argued.

Electronics, Armbrust reasoned, are inevitable, so what engineers must learn to do is fully exploit them in the context of the type of cars they’re working on: as a case in point, he cited the latest 911 GT3 – for all its electronic aids, it’s not such a bad car, is it? No Herr Armbrust, it’s just fine… But wouldn’t you like to work on a properly stripped out, back to bare bum basics sports car with no electronics and purely mechanical suspension? You know, like Porsche used to make. He smiled wryly, looked a little wistful, and then explained that nobody really buys cars like that any more, at least not in the numbers that would make their development costs viable.

You could sense the regret in the tone of his voice at having to make such a statement, but the mournfulness was replaced by bright eyes and a massive grin when I then mentioned the 968 Club Sport that I’d driven a few days earlier. ‘Ah, now that was a fabulous car,’ reminisced Armbrust. ‘Its handling was superb, great on the track and good on the road, too. And that four-cylinder engine wanted to rev and rev. I think people have forgotten what a marvellous car the Club Sport was, what a marvellous Porsche.’ Driving passion is alive and well in Porsche’s dynamics department, it seems, even if the engineering lexicon has been forced to change through the decades.

Scorching sunshine and a dazzling array of Porsches greeted us outside the hotel the following morning: the colourful line-up seemed like an emphatic statement of corporate intent and included Boxsters and Caymans of the new GTS persuasion, and 911s ranging from regular Carreras all the way through to the Turbo S and GT3. Porsche makes sports cars, jah? What Porsche is rather patchier on, though, is making good road routes for test drives, and by the time we reached the test track we could only be certain that Porsches are a bit quick on the autobahn and ride just fine on super-smooth German back roads.

The Aldenhoven Testing Centre doesn’t occupy much land area, but Porsche has packed a lot in, including a baby handling course, a broad apron for setting up slalom exercises where you can spin off without calamity, and a banked, elongated oval with straights long enough for full-bore, launch-control acceleration runs and full force, ABS chattering braking. And during the course of the day we all got to try most of the cars in all of the different disciplines.

A fun day out? You better believe it… Learn much about individual cars? Not really. We were split into groups, two to a car – which meant frequent driver’s seat hopping – and for some of the exercises, most notably on the handling track, we travelled follow-the-leader style in a big pack, which meant concentrating more on the cars in front and behind you than on quirks of vehicle dynamics.

But there was plenty of scope for making general observations about Porsches. Such as, on a tight, wriggly handling track, a Boxster GTS is just as quick as a 911 GT3 or Turbo S. And that during a high-speed emergency lanechange exercise (that all German car makers deem extremely important), you have to be going ever-so quick and make knuckle-head steering inputs before you can defeat the chassis’ electronic safety net and get a decent, tyre-smokin’, guffaw-inducin’ spin up and rotating. We were also reminded how insane a launch control standing start is – foot hard on the brake, PDK paddled into first, throttle crunched into the carpet, revs tickling the limiter, everything on the threshold of frenzy, and then leap off the brakes… A little chirp from the tyres and then, depending on which model you were in, a torrent of thrust ranging from ‘seriously impressive’ (Boxster and Cayman GTS) through to ‘ha-ha-ha-ha-ha’ (911 GT3 and Turbo S).

Same applied to the braking exercise – up to about 80mph and then absolutely with- all-your-right-leg-might attention to the brake pedal, only there was no running commentary as your chest was being constricted by pressure from the seat-belt as it restrained you from being jettisoned through the windscreen. The other lesson learnt here was that if you do this little test often enough, you start feeling really sick.

Ultimately, though, the Porsche Experience day at Düsseldorf seemed less of an educational outing and more a way of reassuring the European motoring press that Porsche’s designers and engineers and development drivers are not only keeping the faith with sports cars, they’re ardent fans of the breed and are passionate about making their sports cars the best in the world. Which in an era when Porsche sports cars are no longer the major contributors to the profit pot, and therefore might be side-lined in favour of SUVs, is very good news indeed.

Trapped in the Spyder’s web

Until the Porsche Experience day at Düsseldorf I felt lukewarm towards the 918 Spyder. Sure, it’s a goodlooking thing, if a bit Buck Rogers in some of its detailing, and all the data seems delightful, but I find the whole hybrid hysteria a tad ‘bandwagon’. Every supercar maker is going hybrid so Porsche is, too. Which the cynic in me says doesn’t necessarily make it a great Porsche. I was so nonplussed by the Spyder that at Aldenhoven I was the last journo to get a ride – no drives, sadly. And initially my scepticism seemed as though it was a seed that had fallen on fertile ground. The Spyder’s facia and instrumentation were reminiscent of a 1990’s arcade game and the stream of data about electrical current flow and torque distribution between the wheels seemed gimmicky. As for moving away from standstill just using electric power and with only the hum and hiss of the tyres for musical accompaniment, well, I simply don’t get it with a supercar or hypercar or whatever the currently accepted label is. To me supercars traditionally and currently should be about drama and rebellion and fantasy and heresy. They should be unjustifiable. Irrelevant. Want to show how green you are? Then don’t even consider a 200mph, two-seater supercar that can’t be used for anything other than enjoying yourself and showing off: buy a Prius instead, and then you won’t have to squander the world’s resources buying a second car to do all the practical stuff in your life. But then my driver did the standing start stunt. Wham-bam! The Spyder became all banshee, shrieking like a race car, accelerating like a dragster, making the GT3 and the Turbo S seem a little sleepy by comparison. And then huge braking force on the entrance to the track’s banking, so that we didn’t punch our way out through the top railing. It was an oh-so-brief exposure to the Spyder’s potential, yet confirmed its status as a proper Porsche. Yet it did make me wonder how much better still it could be if it weren’t weighed down with electric motors and batteries…

Ducks and drakes on the tight, twisty handling course, where a Boxster GTS is just as fast as a Turbo or GT3. Right: The 918 redefines performance. It’s a wild ride!

Here they are: The usual suspects, Drive-MY elite squad of journalists and Porschephiles. They’ve always got plenty to say so we’ve given them a couple of pages each month to chunter on. Keith Seume, Chris Horton, John Nytipler, Steve Bennett, Paul Davies.