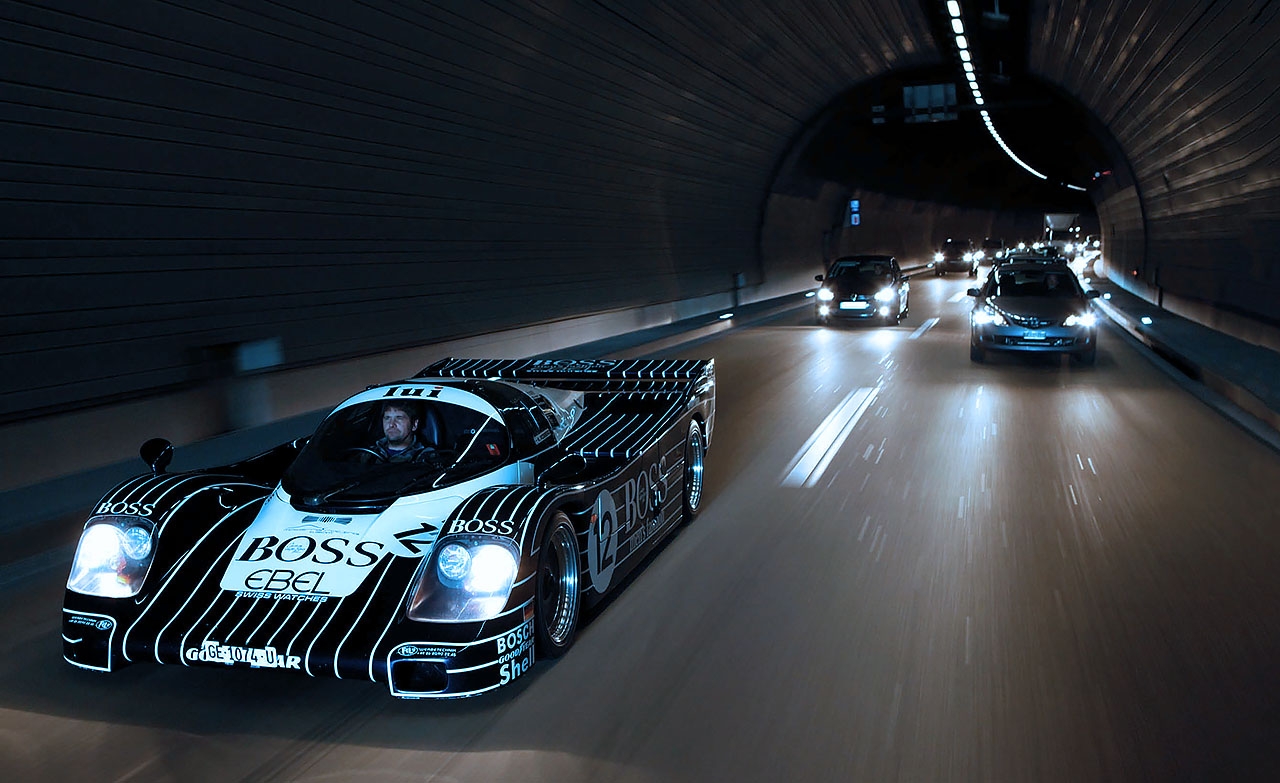 Road Racers. Road legal Porsche 956 and Count Rossi’s famous 917 road car. There was a time when sports cars were driven to the track on the road, but by the mid 60s, such traditions were dying out. There’s always the odd exception, like this ex Keke Rosberg Gp C 956, which a mystery Swiss enthusiast has converted from track to fully road legal Words: Vincent Flandin. Photography: David Pell.

Until the advent of the 910 Porsche’s prototype racers could and would regularly be registered for road use, which meant the chance of seeing a Le Mans racer on the road was fairly high for a while. After that point it became much rarer with only the richest of enthusiasts being able to indulge: Count Rossi and his road-legal 917 being one of the more famous examples. 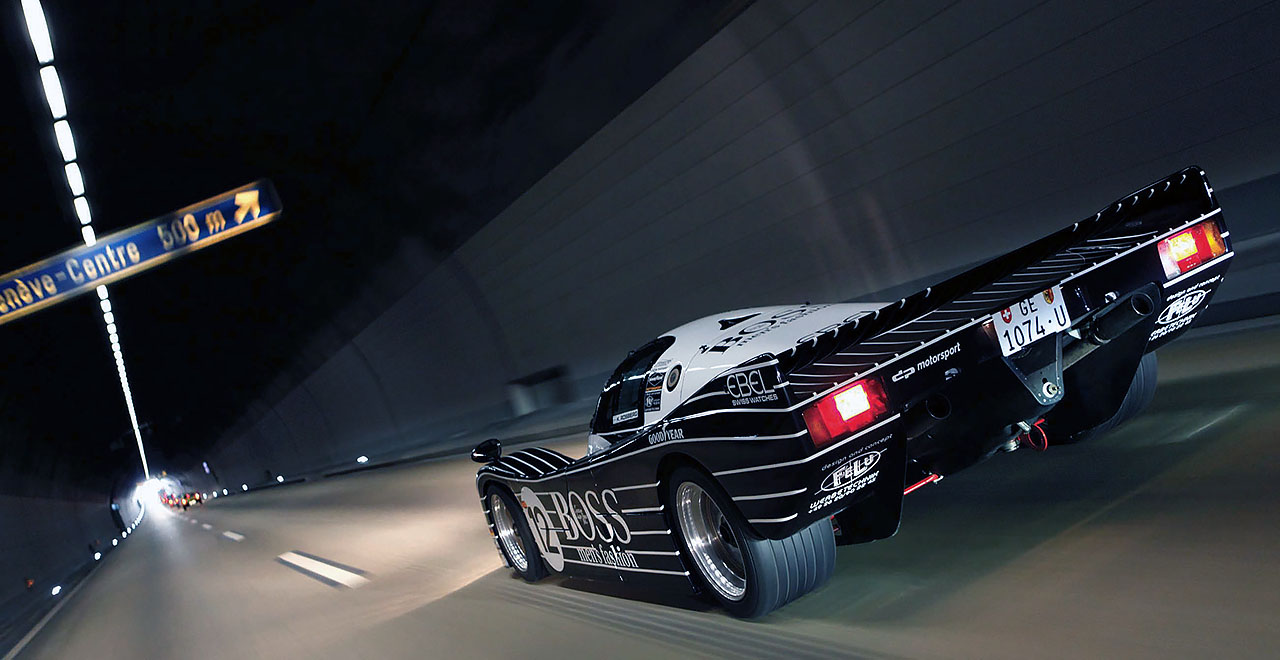 The rule changes meaning that open ‘barchettas’ became the norm didn’t help, neither did the fact that understanding of aerodynamics made the basic designs less and less compatible with road use, not to mention ground-clearance getting tighter and tighter. One option was to go for a 935, a car whose performance envelope really wasn’t that far removed from the factory 936, but that had the well-appreciated benefits of being 911-based.

Having helped kill off the ‘silhouette’ category by dint of winning everything, Porsche found itself in the early ’80s looking at the new FIA Group regulations which reconfigured the previous one to six groups to the new A to C. Group A was for four-seaters, Group B for GTs and Group C for prototype track-based cars, not forgetting Group N which was for fourseaters closely-related to their production counterparts. We’ll leave the homologation details of the other groups to concentrate on Group C, which, ironically, was to allow Porsche to irrevocably leave its mark on Le Mans with consecutive victories from 1982 to 1987. 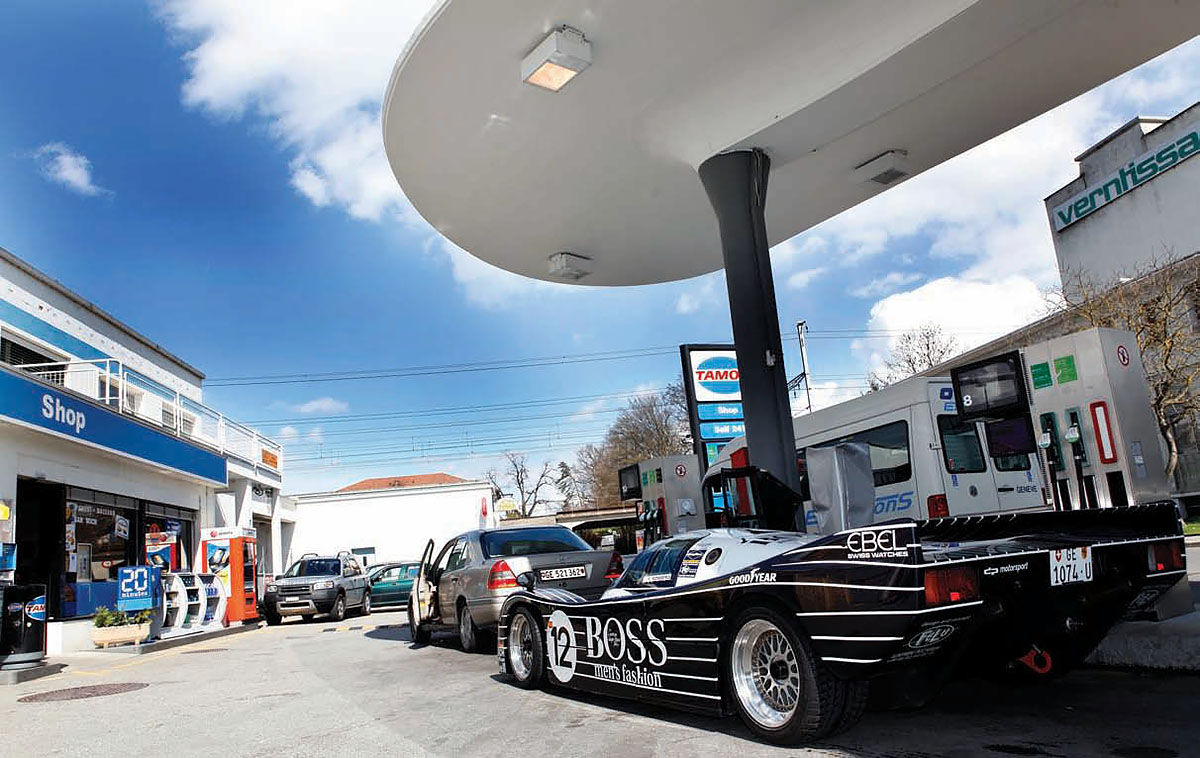 The Group C cars had to have a closed cockpit, with two doors of at least 30 x 50cm, a maximum width of 2m and a minimum weight of 800kg. Engine layout and capacity was unrestricted but a 100 litre fuel tank and limited stops meant manufacturers needed to aim for a fuel economy of around 55-litres to 100km, a ‘reasonable’ figure given a 911 Turbo of the era was looking at 40-litres per 100km when used on track!

Porsche looked at these new regulations with its usual, very logical, eye especially knowing it had the ideal engine sitting on a shelf: a turbocharged flat-six. Not that of the 935, nor that which furnished the 936, but rather the version created for ‘Moby Dick’, the infamous and very special 911 streamliner built by Stuttgart for the 1978 season. This car, built around every loophole in the rule book ran an engine which had the block from the air-cooled 930 Turbo combined with four-valve, watercooled heads. Add to this two turbos and an intercooler and this engine would deliver around 650bhp, when configured to allow for the required fuel consumption.

For the 956 – on which this road rocket is based – Porsche abandoned the tubular frame chassis in favour of a much more modern alloy monocoque, which offered much greater rigidity whilst also allowing better reparability in case of a shunt. The suspension and brakes were heavily derived from the 936 to speed up development time – the new regulations were delivered on the 15th of October 1981 ready for a season start in 1982!

In May 1982, the 956 came second in its first race at Silverstone before delivering a ground-breaking 1-2-3 at Le Mans three weeks later. The rest of the season mirrored the success of these first two outings, a complete triumph for Porsche. Stuttgart is so confident in the car that it starts privateer sales for the very next year at a price equivalent to €330,000. 18 cars are sold to private teams, some of which are cheeky enough to beat the factory cars on occasion.

At the end of 1985 the rules change slightly forcing manufacturers to ensure that drivers’ feet are behind the front axle for safety. Porsche keeps things nice and simple and simply turns the axle around allowing for the extra space and stretching the wheelbase by a few centimetres. And even if the differences between a 956 and a 962 are deeper this illustrates how close they are to each other in reality. The 962 wins Le Mans twice and goes on to a career just as glorious as its 956 forbear – especially in the United States.

Having helped kill off the ‘silhouette’ category by winning everything, Porsche found itself looking at the new FIA Gp C regulations.

But the 956 and 962 didn’t just inspire on track. Some thought that it must be possible to drive one on the road, as you do! Some chassis were therefore built and homologated to be driven legally on the road, however that is not the case of the car you see here. This was a genuine, albeit moderately successful race car used on track by, amongst others, Keke Rosberg before being bought by who shall be known as Mr B, a real enthusiast who wanted to use it on the road like almost all the other cars in his collection. Needless to say this took quite some work, especially when one considers the car is registered in Switzerland, a country whose ministry of transport is well known for its strict rules!

Indicators, door locks, wing mirrors, a handbrake – the modifications are extensive. The hardest part however is fitting catalytic converters to the exhausts behind the turbos without completely strangling the engine. In the end it took Franco and his team at Garage Moderne three years to complete the work and allow this blue beauty to acquire the paperwork allowing it to cruise the streets of Geneva as freely as any other vehicle.

It’s been five years now since fellow road users have shared Tarmac space with this UDO (unidentified driving object) on the roads of Switzerland and the race tracks of France – its owner not baulking at the drive to Dijon or Le Castellet. We’ve known Mr B and his car for quite some time, but it would not have been possible to finally drive the car on Geneva’s streets without the help of Pascal and Jean-Luc who are its regular custodians.

Parked amongst the other racing Porsches in the Garage Moderne it looks very much in its element, were it not for how low it is in comparison.

As with all tests, the priority is given first to the photography and we therefore head out into the town in two cars as normal. However, it only takes 100 metres to realise that there will be nothing normal about this journey. And this is not due to the car being in any way cantankerous to drive (it has a syncromesh ’box), or that its low height and width make it a handful to manoeuvre. No, it is due solely to other road users when they first spot this roadgoing 956. Between those who want to do a complete tour, those who want to take photos and of course those who want to prove that they, too, are ‘racers’ and add those who do not understand that a car like this needs to take sleeping policemen at walking pace. On the other hand, at least filling the car with fuel is as simple as with any other car as the racing filler has been replaced by a conventional, lockable cap.

Time to leave town and join the motorway, which means an immediate drop in stress levels and an equally immediate increase in the pace. Indeed a quick jab of the throttle is all it takes to leave all and any other traffic behind, and in a level of comfort which belies expectations.

Once back in town, a few more photos in front of the United Nations building, which once again creates the inevitable crowd as this is a car which really leaves no one indifferent, especially when one considers that even knowledgeable car fans struggle to identify it. We don’t hang around and instead return the car to its garage at the end of one of the most memorable tests we have conducted.

Memorable because we had no idea this car would be so easy to drive or that it would create such an impression wherever it went, although in terms of the latter maybe we were kidding ouselves. I mean, you can hardly blame other road users for falling over themselves on encountering a Gp C 956 in downtown Geneva.

Left: Not hugely practical, but at least you see out of the mirrors and scissor doors make it reasonably easy to get in and out of. Below: In downtown Geneva everyday traffic towers above the 956. Above: Tunnel vision. Road going 956 on the streets of downtown Geneva, a city not exactly tolerant of the motor car. Left: Interior is comfortably trimmed. Documentation proof of Swiss road legality.