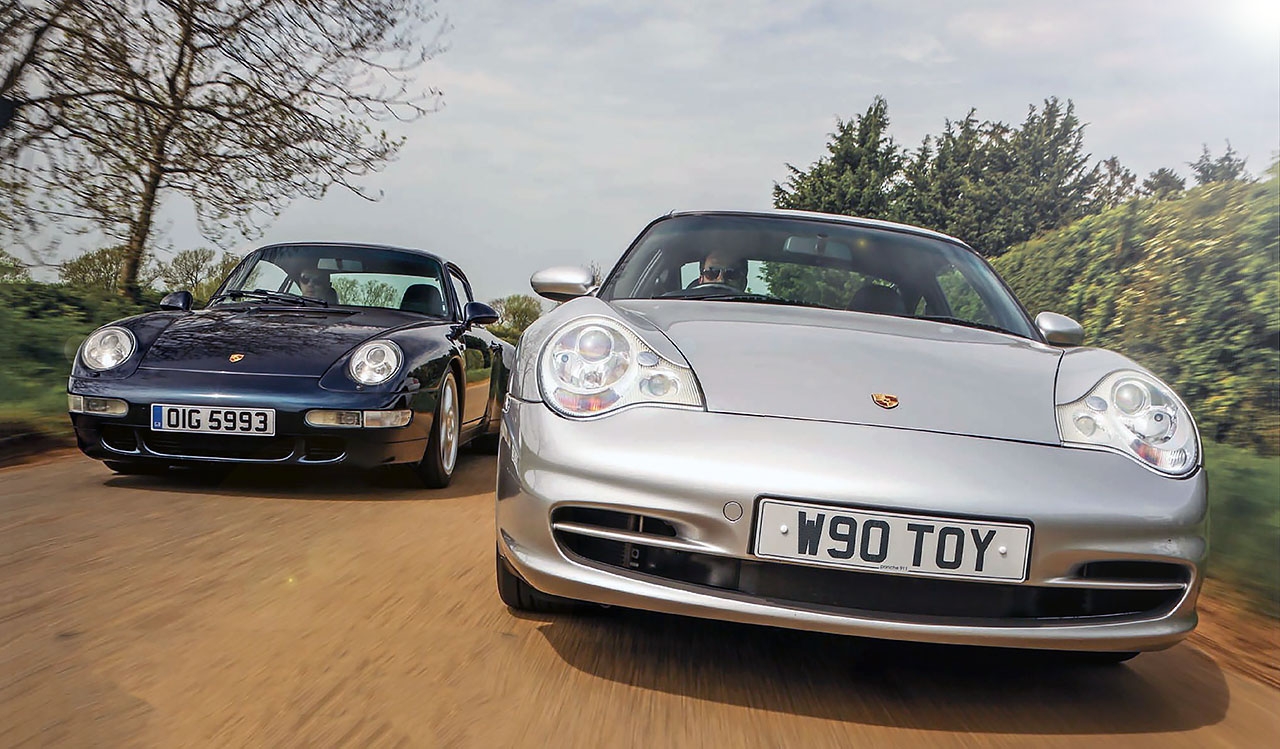 Meet the new boss…Porsche’s unsung 996 Bargain 911 993 vs. 996. The Porsche 996 remains the most affordable 911, but how does it compare to the air-cooled 993? …not the same as the old boss. James Page compares the Porsche 996 and 993 to see if the first water-cooled 911 can match its predecessor for a fraction of the price. Photography Tony Baker.

When we celebrated the 50th anniversary of the Porsche 911 in 2013, we asked a number of marque specialists, road-testers, racing drivers and broadcasters to name their favourite variant.

There were, of course, votes for the usual suspects, such as the Carrera 2.7 RS, a couple for the 993 – the last of the air-cooled cars – and one for the current 991. Brilliantly and surprisingly, however, former F1 driver Tiff Needell bucked the trend by picking the much-maligned 996.

“While not wishing to upset the traditionalists, I’m not bothered about whether the engine is air-cooled or water-cooled,” he said. “This was the model that brought the 911 into the modern world. We finally got rid of the VW pedals and had a chassis that handled in a much more progressive and controllable manner. Not a convert before, completely converted after!” 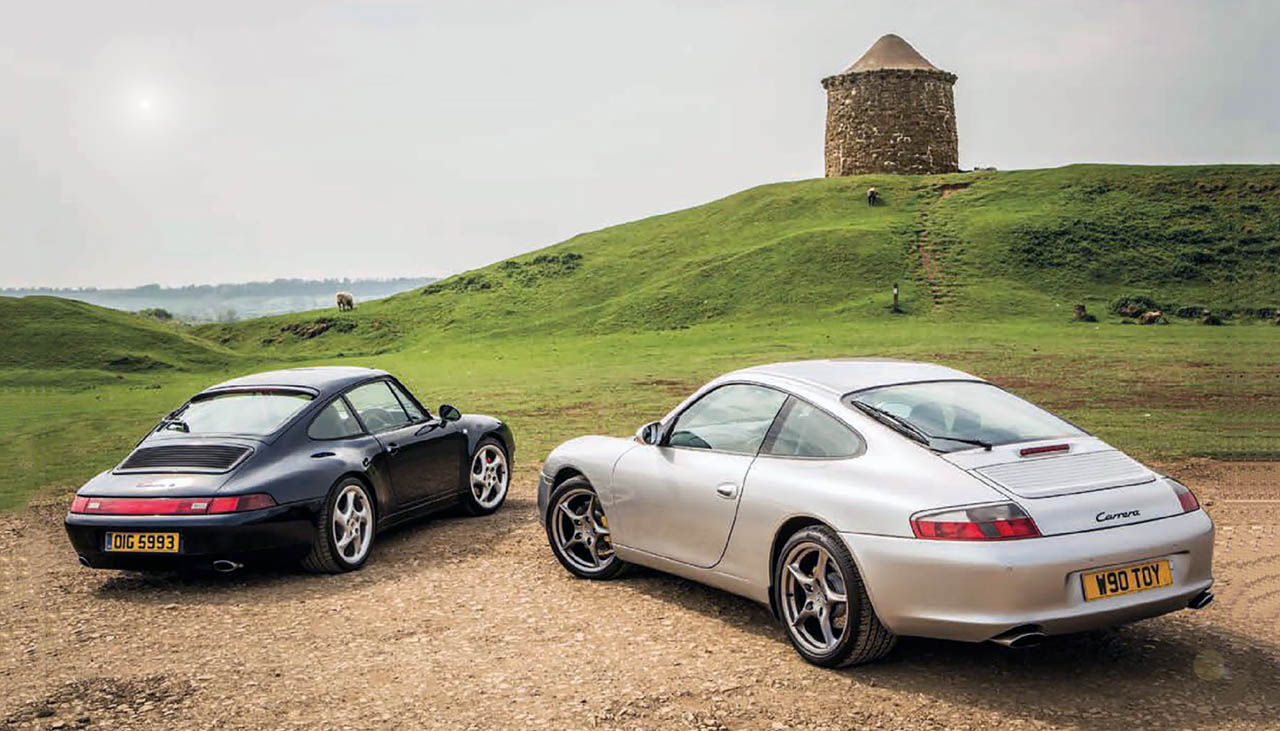 It wasn’t a recent revelation, either. During his original piece on Top Gear when the 996 was launched, he concluded that: “As a driving experience, this is second to none.”

So why has the 996 spent so long in the doldrums? Probably because, after nearly 35 years of gentle evolution, Porsche subjected its star turn to what, in 911 terms at least, amounted to a revolution. For purists, the most unpalatable change came with the move to water-cooling for the flat-six engine, but it was a step that was probably long overdue. Regulations for noise and emissions were becoming harder to pass with the air-cooled unit, and then there was the simple fact that Porsche could extract more power by making the switch.

For many people, of course, what it did was elevate the car’s predecessor – the 993 – to the status of ‘last proper 911’. The fact of the matter, though, is that the way in which Porsche built its fabled sports car was no longer viable. In the early 1990s, the company was nowhere near as prosperous as it is now, and the 993 could quite easily have become the last 911, full stop.

Interestingly, Porsche investigated using a water-cooled V8 in that car – which, even with all other things being equal, would presumably have made the 964 the ‘last proper 911’. For reasons of cost, however, the firm returned to the 3.6-litre flat-six. With lighter pistons and conrods, plus a stiffer crankshaft, it ran more smoothly than the previous iteration and produced 272bhp. A sixth gear was added to the G50 gearbox, and the rear suspension was completely redesigned with a multi-link set-up.

Even though little was carried over from the 964, the basic ingredients and silhouette remained in place, which was enough to satisfy the purists. If Porsche was to return to robust financial health, however, it needed to satisfy more people than that – without bankrupting itself. The 996, therefore, was developed with one eye on attracting customers who might previously have been put off by the 911’s quirks, and the other on making the business of actually building it cost-effective.

The car shared its bonnet, headlamp assembly, front wings and doors with the new Boxster, while the rear end was noticeably fatter – the water-cooling brought with it extra paraphernalia – and the larger tail-lights were mounted higher. It was bigger in every dimension, but overall weight actually dropped from the 993, as did drag – 0.34 to 0.30 Cd. It was far stiffer, too.

The increase in size is immediately apparent when you see the two cars parked side-by-side. The 993 is the sleeker and tauter of the two, especially in profile, but the 996 was helped by a 2002 facelift that gave the rest of the range the same headlamps as the turbo and, visually, moved it further away from the Boxster. The front end is, in fact, ageing incredibly well, even if the rear still looks a touch bloated.

The differences only get more pronounced inside. The 993 is less spacious, and features a somewhat haphazard dashboard that immediately links it to previous generations of the 911 family. Ahead lies the central rev counter, with speedo and clock to the right, various oil readings and fuel level to the left. Here and there are controls for the heater and lights. Jeremy Clarkson once said that, if he filled his mouth and nose with dials and switches and then sneezed, they would be laid out more sensibly. Somewhat harsh, perhaps, but you can see his point.

There are no such compromises with the 996, which retains the basic instrument layout with the rev counter front and centre, but presents it in a much more modern way. There’s a far more coherent centre console, too, with the heater controls and stereo within easy reach. Then there are the pedals: not only are they top-hinged rather than floor-hinged, they are nowhere near as offset as in the right-hand-drive 993. In every objective sense, it is a vast improvement.

Weissach’s engineers worked hard to make sure that as little of the flat-six’s aural appeal as possible was lost in the transition from air- to water-cooling. To a large extent, they succeeded.

The engine is an unbelievably smooth unit, quickly spinning to beyond 6000rpm to the accompaniment of a sound that is undeniably still that of a 911 – even if the noise is rather more subdued. The 993’s exhaust note has more of a bark to it, a distinctive mechanical edge that was a characteristic of its forebears.

Both subjectively and against the clock, the996 is the quicker of the two in a straight line. In truth, each variant delivers a serious shove in the back, but the later car responds more instantly to throttle inputs. That acceleration is only part of the 911’s overall appeal, though. If the 996 lacks the final percentage point of steering feel compared to its predecessor, it is a truly miniscule difference and it counters with greater refinement to its ride and a better gearchange. Both cars constantly communicate with you in a way that shames many of their supposed rivals.

The other quality they share is that of beingpractical – sensible, almost – despite their epic performance. Chris McGinley proved that with our featured 993, travelling down from Yorkshire to our photo-shoot in the Midlands with his wife Katie and two-year-old son Teddy, who fits perfectly in the back thanks to a Porsche child seat designed specially for the narrow buckets. There was even room for his pushchair, and surely there can’t be many supercars that could replicate that feat.

“I just really wanted the last of the air-cooled 911s,” McGinley explains. “I looked for a while to find one in the spec that I wanted, and I love this colour combination, too. It’s great to drive, but it’s the sort of car that you also just want to look at in the garage. Two hours later, my wife will ask if I’m coming back in anytime soon.

“I bought it just under a year ago, and all I’ve really done is clean it up a bit. I took off the wheelarch liners, cleaned it under there and applied Waxoyl everywhere. I’ve tidied up the engine bay, too – there must have been a guy at Porsche whose job it was to sharpen cable ties. Every time I put my hands in there, I cut them.

“I’m taking it to Carcassonne in the summer. I’ll drive it down to Portsmouth, get the ferry to Bilbao, then drive it over the Pyrénées and meet my family there. I can’t wait for that, especially the run over the mountains. A Porsche garage lent me a 991, but with the modern ones you just run out of road – open it up for a few seconds and you’re at the far end of the M1. This is much more usable and much more involving. If you drive it a long way, you definitely feel it.”

“It feels like a classic,” says Alistair Albrecht, owner of the featured 996 as he settles into McGinley’s car, “whereas mine feels much more modern.” Like many of his generation, the music producer had a poster of a 911 on his bedroom wall and had always coveted one.

“I had a Maserati 3200 a long time ago,” he explains, “which was quick but felt like it wanted to kill you. Then I had a Range Rover but it halved in value in the time that I had it. The servicing costs were huge, the running costswere huge – and I just got bored of car bills. This is a great toy and I love it, but it’s a reasonably low-mileage example with good history, so I also know that it’s not going to decrease in value.”

That much is surely true. When we published that 50th-anniversary celebration, it was possible to find a range of 996s for about £10,000. Today, that sort of money will only just get you a semi-automatic Tiptronic model with more than 100,000 miles on the clock. Pre-facelift cars proliferate at this end of the market. Later examples had a bigger engine, 3.6 litres rather than 3.4, but all Carrera powerplants picked up an unfortunate reputation for terminal failures of the intermediate shaft that drives the camshafts. It’s not as prevalent an issue as some marque forums might have you believe, and updated bearings can help, but it didn’t do the 996 any favours as a second-hand buy.

If your budget stretches to £16-17,000, suddenly you’re presented with a choice of facelifted 3.6 manuals with reasonable mileage and watertight history. To get a comparable 993, you’ll need to spend at least twice as much, so the 996 would still appear to be, as Road & Track once put it, ‘The 911 deal of the century.’ Values are undoubtedly on the move, though, and deservedly so. Whatever the purists may say, this is every inch a 911 and in no way does it leave you feeling short-changed – even when driven back-to-back with the revered 993.

Without doubt, the 996 marked the single biggest leap in 911 development – to the extent that it feels as if there should be at least one intermediate generation between it and the 993.

When new, it attracted those who wouldn’t previously have considered the model and sold in far greater numbers than its predecessor. It did for many what it did for Tiff Needell: not a convert before, completely converted after.

Thanks to Chris Seaward and Andy Willis at Porsche Club Great Britain: 01608 652911; www.porscheclubgb.com

‘WHATEVER THE PURISTS MAY SAY, THIS IS EVERY INCH A 911 AND IN NO WAY DOES IT LEAVE YOU FEELING SHORT-CHANGED’

Electronically controlled pop-up spoilers take care of aerodynamics at speed without compromising the classic 911 shape. Clockwise, from above: instrument cluster is more stylised in 996; vast discs behind 18in alloys; packed engine bay houses watercooled flat-six; cabin is more modern with proper ergonomics for the fascia. The familiar 911 profile remains, but thanks to careful evolution of the design the larger 996 is noticeably more modern than its forebears. Clockwise, from right: last of the air-cooled flat-sixes was good for 272bhp; rev counter takes pride of place; cabin retains the hallmarks of earlier 911s, including the floor-hinged pedals; 18in turbo wheels. Steeply raked windscreen and curiously positioned wipers bestow the 993 with a quirkiness that is absent in the styling of the later Porsche.