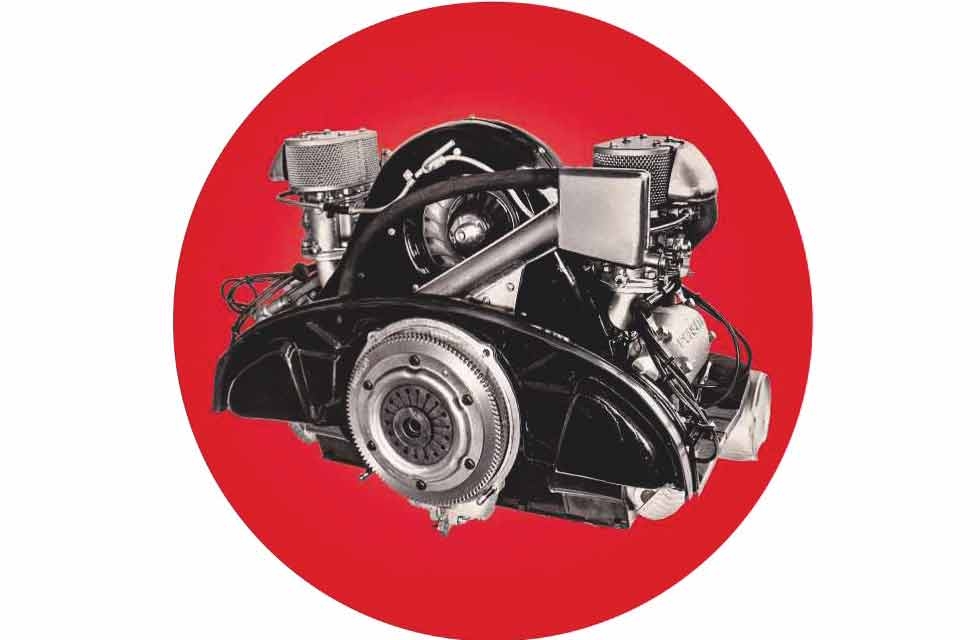 A classic era Porsche flat-four is just a tuned-up Volkswagen Beetle engine. Say that at a gathering of the Porsche faithful and brace yourself for the onslaught. So, what is the truth?

In the beginning, the truth was exactly that, the tuning consisting of twin carburettors and a higher compression ratio. But not for long because in 1948, a year into production, Porsche designed its own cylinder heads with inclined valves and better breathing. The capacity was reduced from the then-current Beetle’s 1131cc to 1086cc, too, to suit the under-1100cc motorsport class.

From that point, the flat-four kept on diverging from its origins and followed its own path. In 1951 it grew to 1286cc, achieved with new aluminium cylinder barrels, featuring chrome-plated bores in place of cast-iron ones. A year later buyers had the new option of a 1488cc motor with a longer-stroke crankshaft, and if you wanted to go racing you could have it with a Hirth roller-bearing crankshaft and a racier camshaft. That camshaft was the work of Dr Ernst Fuhrmann, who later made more radical changes to the flat-four’s architecture. A 1290cc version for racing also appeared.

The Beetle roots were fading, and after November 1954’s thorough re-design of the whole engine range only the basic layout remained. All the castings were strengthened, and the crankcase consisted of three rather than two pieces: the main part was still split along the crankshaft axis, but an extra section supported a central pedestal for the fan and dynamo instead of that pedestal being part of the right-hand crankcase casting. And so the whole engine was unique to Porsche.

Engine sizes were then 1286 and 1582cc, with one exception – the one you have just read about in the previous pages. This was Fuhrmann’s four-camshaft Carrera engine, the 1498cc capacity of which was just 10cc greater than the earlier 1488cc unit, but with a bore 5mm broader at 85mm and stroke 8mm shorter at 66mm, making it very oversquare. This engine, designated 547 and launched in 1955, was an entirely new unit with dry-sump lubrication and, of course, those four overhead camshafts in place of a Beetle-style single camshaft and pushrods. The twin-cams-per-bank layout allowed efficient hemispherical combustion chambers, but this efficiency was achieved via complexity and cost.

Horizontal transverse shafts took drive, via bevel gears, from the crankshaft to the bottom (exhaust) camshafts, and from there, via vertical shafts and more bevels, to the upper (inlet) camshafts. That’s a lot of gears to machine and laboriously set up.

‘AFTER 1954’S THOROUGH REDESIGN, THE WHOLE ENGINE WAS UNIQUE TO PORSCHE’

But it worked, beautifully. In 1958 the bore grew to 87.5mm for a 1588cc capacity, the crankshaft changed from roller bearings to plain shells, and the former twin distributors, one on each inlet camshaft, gave way to a single crankshaft-driven one as in the pushrod engines. Then, in 1962, the engine grew again to 1966cc (92mm bore, 74mm stroke), in which size, suitably tuned to 180bhp, it went on to power the 904 racing car – the pinnacle of Porsche’s classic-era flat-four sophistication. And then Porsche had the 911’s flat-six, and the four-cam flat-four’s purpose was over.

Meanwhile the regular 1582cc flat-four continued in the 912, launched two years after the flat-six 911, until 1969. And that was the end of Porsche’s flat-four line until 2016, when new turbocharged units of 2.0 and 2.5 litres brought a new fuel efficiency – and a sound that was nostalgia-inducing to some and plain odd to others – to Cayman and Boxster.

Except, that is, for a blip in the timeline in the 1970s, when Porsche’s roots were revisited in the mid-engined VW-Porsche 914, the humblest of which used the 1.7-litre (later 1.8) Volkswagen flat-four originally fitted to the 411. A 2.0-litre, longer-stroke, fuel-injected version arrived in 1973, also used in the US-only 912E available briefly from 1976. Those Volkswagen genes just wouldn’t go away.