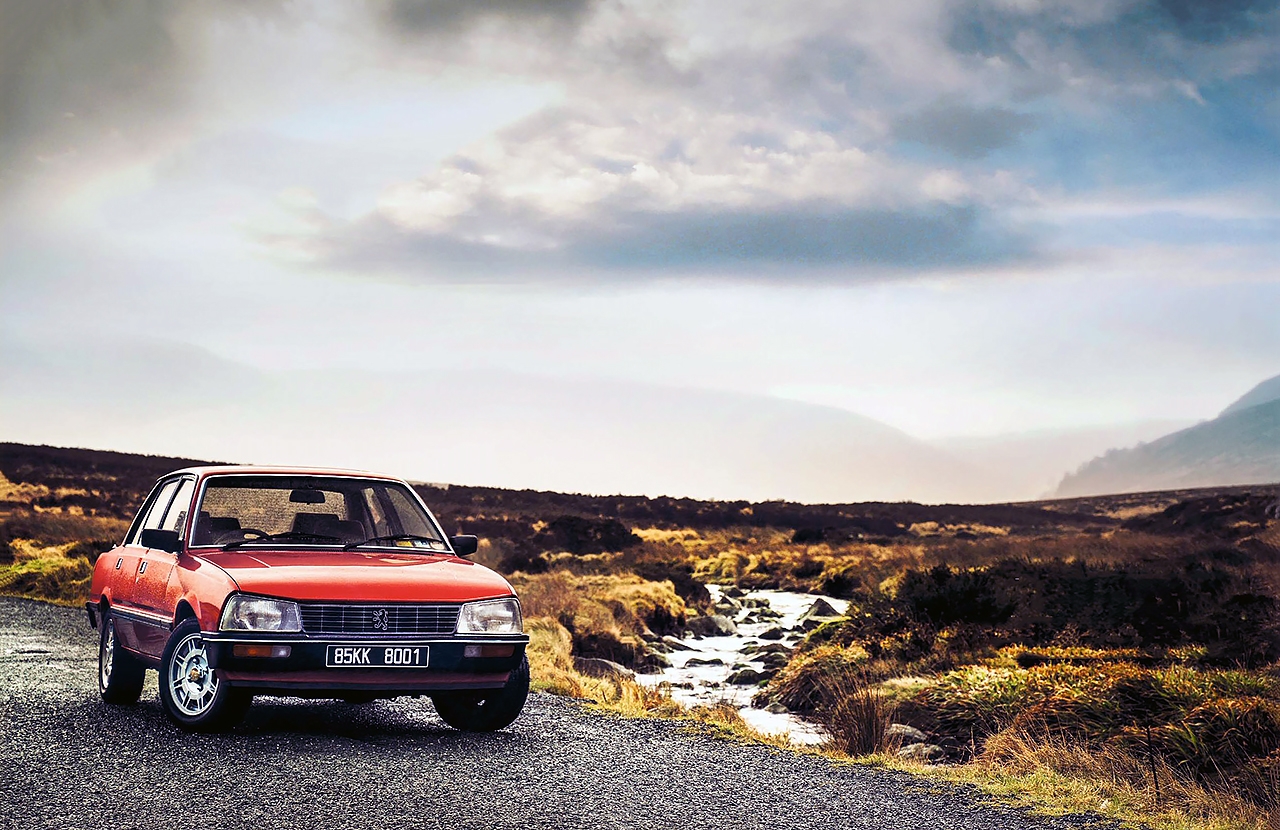 Think the first GTI was the 205? Think again. Peugeot’s take on the sporting saloon class was loved in the 1980s, but are now hard to find. We head to Ireland to sample a rare survivor. Words Nathan Chadwick. Photography Richard Pardon. Endangered beast. Remember the Peugeot 505? We do. Especially this wonderful survivor, which was the company’s first GTI-badged car.

Endangered beasts only 9 left. Achingly desirable, near extinction. The phrase GTI is loaded these days. Picture a car so-monikered and you’ll be thinking of a small, snarling front-wheel-drive terrier-like car, ready to pick fights with bigger machines and win thanks to immediate throttle response and nimble handling. Peugeot’s very own 205 GTI has a lot to do with that preconception. Only, the very first Peugeot to wear that badge is drawn from a very different ilk. The 505 is a fairly big rear-wheel-drive saloon, for starters. It’s not exactly what you’d call overtly sporty looking, either. It is handsome, though. From the eyebrows-raised front headlights and wings, to the sharp and well-manicured rear, Pininfarina did a fine job of elevating the 505 out of the humdrum executive saloon set – well, in 1979.

Five years later the automotive world was very different – Ford’s Sierra had brought concept-car-style smoothness to the everyday commute and BMW’s 5-series was now a serious contender among the younger executive crowd. Peugeot, meanwhile, was struggling. Having traded for years on its products’ ruggedness and reliability, the 1980s demanded sportiness, aspirational appeal and sexiness. The most exciting 505, the STi, was looking distinctly old-hat. The 505 GTI was the answer – launched in 1984 to widespread acclaim, it’s now a great car that very few remember. Not that there are many still running to remind us – there are nine cars licensed in the UK, down from 466 in 2001.

So we’ve come to the Wicklow mountains south of Dublin to find a very original example of the breed to refresh our memories. Is it still the car that so enchanted road testers in 1984? Let’s find out.

Sliding into the 505 reminds me of just how light and airy executive cars used to be. The Paul Bracq-penned interior may be a sea of brown, but the slim pillars, unobtrusive centre console and deeply comfortable velour seats combine to create an ambience that’s agreeably 1980s luxury private jet in its appeal.

You won’t find shiny black leather, aluminium inserts and needlessly solid seat bolsters here. Even before we turn the key, we’ve warmed to the 505, and it feels like a great place in which to spend a few hours and hundreds of miles. And it would last a few hours before the next fill-up, too. Peer through the rakish two-spoke steering wheel and not only is there an unencumbered view of the dials, but one of the first nods towards the buzzword that’s come to dominate motoring – economy. The Econoscope nestles below the tacho, keeping watch on your driving style to see whether you’re sipping or gorging fuel. Given the second fuel crisis was passé in 1984, this seems rather incongruous. We’re not worried about that, and firing up the 2.2-litre four-cylinder elicits a refined whisp, rather than the coarse rasp usually associated with the GTI badge. Set off and it’s smooth. Hmm, perhaps too smooth? We’ll see.

It certainly doesn’t have a headline horsepower figure to get too proud of – 128bhp isn’t a great deal, and 10 seconds to 60mph is passable for an executive express. The four-speed automatic gearbox in this car isn’t keen to play ball either – the engine delivers peak power at 5750rpm, but you only have a narrow time to play before the ratios call time on any tomfoolery. So far, so tepid… 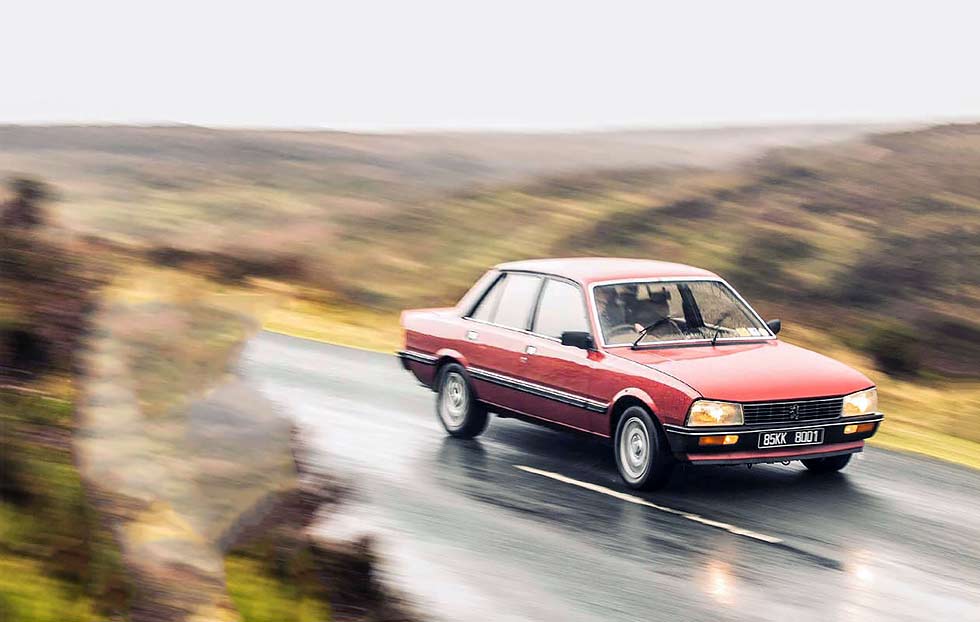 Peugeot 505GTi road test. Excellent damping and limited-slip differential help to give you confidence to get frisky.

But then we look at the location – or try to. A lot of horizontal rain, fog and wind has been dumped on us and if the fog lifted, we’d see beautiful scenery – much of it a long way down. If similarly ensconced in a Mercedes-Benz 190E Cosworth W201 or BMW M535i E28, we wouldn’t be barrelling into corners at such a high speed. At best we’d be tiptoeing, at worst picking bits of our kneecaps out of the wreckage.

Such fears aren’t present in the 505. The limited-slip differential helps give you the confidence to attack corners at speeds most just wouldn’t dream of, certainly in the BMW. There’s just so much grip, and with the compliant damping there’s no shuffle through the steering wheel when galloping over tarmac with more bumps than a teenager’s chops. It just takes what you give it – and begs for more.

Only if we’re really trying does the 505 lose its composure, with a hint of understeer to remind us of our mortality. But that’s taking the 505 to extremes that we don’t really need to get near. We’re covering twistier ground much faster than the BMW or the Mercedes mentioned earlier, the 505 a keen recipient of forceful steering inputs. Getting a sequence of bends hooked up is deeply addictive, however, and the engine spins up to 5000rpm very quickly.

It’s not the most communicative of cars, however – though the GTI received stiffer suspension and wider tyres than the STi, this really is designed for cruising. The steering wheel turns lightly in the hand and there’s not much detail on the road passing beneath you.

Luckily, it doesn’t dampen the fun factor one little bit. While the bald performance figures are behind those of its rivals, what can be summoned from the 505 will be deployed more thickly, and more often. You can drive the 505 hard, safe in the knowledge that it won’t spit you into a ditch (like a 205…). It’s pretty obvious that the chassis could handle more oomph, though.

Peugeot did give the 505 more power to try to combat the Germans. There was a 2.8-litre PRV V6 option with 168bhp, and a turbocharged version of the 2.2-litre unit we’ve exercised today had 178bhp and ambled to 60mph in 8.4 seconds. That’s not far off Mercedes-Benz 190E Cosworth W201 pace.

But it is the Mercedes that’s survived in much greater numbers and is rapidly ascending a price curve. The BMW M535i E28 has risen out of the cheap BMW doldrums, with mint cars going from £5000 three years ago to pushing £10,000 and beyond today. The Peugeot, sadly, became a victim to its younger siblings, despite the sales uplift from the GTI.

Chuck the 505 into a bend and it simply sticks were others would merely twist. / 2.2-litre four-cylinder unit doesn’t zing with performance, but is flexible enough to raise a smile.

The arrival of the 405 in 1987 took the limelight off the 505. Memorable advertising campaigns and Ari Vatanen’s Pikes Peak exploits behing the wheel of the 405 T16 meant the 505 looked distinctly old hat. When the 505 saloon was finally shuffled off the UK showroom floors in 1987, few mourned its passing. From there, the wrong badge meant that many 505swere lost to bad upkeep or the scrap-page scheme. For a car of such character, that’s a crying shame.

The 505 GTI may not have the badge allure of BMW or Mercedes, nor will it win many Top Trumps battles. But for those who delve deeper than bar-room one-upmanship and B-road hooning, the 505 GTI is so much more pliable. With so few cars around, finding one will be your biggest challenge. Parts supply will be tricky, and if you do find a good one you’ll have to pay a decent amount for the privilege. But we feel that if you buy a good one now you’re unlikely to lose money on it – and you’ll be saving one of the rarest and most underrated drivers’ cars ever built. Buy one before they disappear, is our view.

Look for ultraviolet light damage to the plastics as interior trim is very hard to come by. Negotiate a discount if the dashboard’s cracked – unless you want to holiday via French scrapyards. Rust was a major 505 killer. While the cars that have survived have probably done so thanks to diligent treatment of the oily undergarments, it’s worth checking to see when it was last done. We’d budget for a post-purchase top-up, just to be sure.

The 505 was well-regarded for its sheer reliability – it’s not unheard of for some to romp past the 250,000-mile mark. That said, the newest 505s will be at least 29 years old now (if UK saloons), so be prepared for a thorough inspection of the oily bits. There was lots of parts sharing between Peugeot, Renault, Volvo and De Lorean, but it can still be tricky to find trim parts unless you know the right people. Joining either Club Peugeot UK (clubpeugeotuk.org) or Peugeot Sport Club UK (pscuk.net)may be of great assistance.

Struggling to find a non-rusty RHD one for sale? Then Australia may be a good source – the 505’s ruggedness proved popular there.

I BOUGHT ONE MARTY FAGAN

‘I had one back in the day and always liked it. This one was such a rare, mint example, I had to have it. Fuel economy isn’t wonderful about town but great on a long run. Service parts are no problem but it’s a bit of a struggle for body trim. The internet’s a great help if you search hard enough.’

+ There’s so few of these left that there isn’t a market, so to speak. If you really want one, be prepared to pay what the seller asks.

–    –  Hard to find in the first place, but parts are easy to get hold of. Trim is like a rocking horse’s proverbial, however.