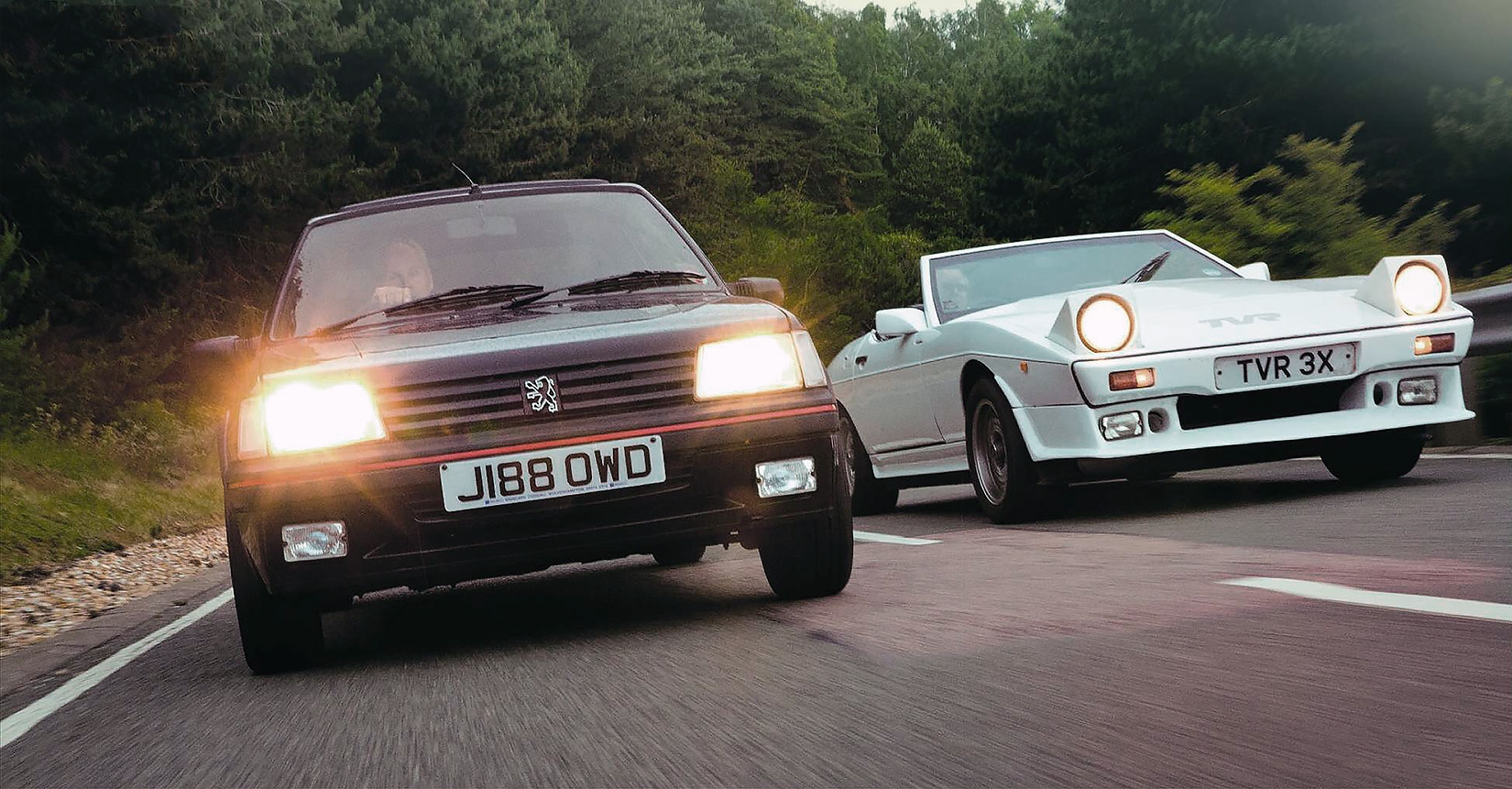 Peugeot 205GTi 1984 Test-Drive. It’s difficult to adopt the correct mind-set to recreate the impact the 205 GTi first had, given how familiar the shape became. In 1984 you’d be used to Gerard Welter’s five-door 205, launched to great acclaim the previous year, and the radically reworked mid-engined T16 Group B version. However, that perfectly proportioned three- door bodyshell – its glasshouse copied straight from the rally car complete with dummy vents in the C-pillar cheekily hinting at an engine in the back, widened wheelarches and a sporty red-on-black instrument cluster – arrived in 1984 in GTi form only. This, coupled with the high-revving, fuel-injected XU5J engine and beautiful chassis balance, meant Peugeot finally had a life-saving hit.

In the early Eighties the Peugeot range had been a cobbled- together combination of ageing Seventies models and an uninspiring inheritance from the Chrysler Europe, Simca and Talbot mergers, all cursed with clattering engines, rust-prone bodywork and soporific styling. The 205 would go on to sell more than 5.2 million units on the basis of its excellent design and reliability, but it took the 1984 GTi 1.6 to grab Europe’s attention.

Settling into the GTi, it’s easy to see why comparisons were drawn with competition cars. The bucket seat seems to wrap around my back like a fighter pilot’s G-suit, anchoring me to the chassis. The steering wheel, with its arrowhead-shaped boss, is shaped so my hands fall at quarter-to-three – the position any racing driver will tell you is best for cornering control on a racetrack. At low speeds I wonder what all the fuss is about. The engine fizzes urgently, betraying a mild level of tuning without sounding aggressive, but the gearchange threatens to undermine the whole driving experience. The lever looks long, hinting at a vague, slow shift – the opposite of the wrist-flick change in the MR2.

But within a few yards I’ve forgotten all about that. Like the best Seventies Fords, the GTi is easy to exploit straight away simply because its ergonomics are near-perfect. The driving experience seems to be a mixture of Mini Cooper and transaxle-gearbox Alfa, given its combination of front-drive with minimal overhangs and an engine that snarls energetically, urging me to rev ever-higher, rowed along by a gearbox that works best if you slam it into the corners of its gate with flamboyant gesticulations rather than measured inputs.

The steering lacks a motorway-friendly ‘dead zone’ when centred, resulting in a skittishness that makes me feel like a rally driver, jabbing minute inputs through to the front wheels in accordance with imaginary pace notes. The GTi pounces towards apexes with its nose down, its 185/60 HR 14 front tyres glued to the tarmac while the inside rear wheel lifts. The engine never seems to find a calm tickover, its revs always surging upwards, tempting ever-faster cornering. This 205 is the devil on your shoulder. If you indulge its constant goading, it will eventually let go of the road and kill you.

But to paint the GTi as a passing-fad fun-car with no purpose beyond grin-generation would be wide of the mark. Although rallying attention was focused on Group B in 1984, the GTi was homologated for Group A competition, and in the following years regularly trounced four-wheel-drive British Rally Championship opposition in the hands of Mikael Sundstrom, Louise Aitken- Walker, Colin McRae and Richard Burns.

This combination of energetic restlessness and serious cornering ability, coupled with Eighties Group A rally heritage, puts me in mind of a much more expensive classic from later in the decade: the Lancia Delta Integrale. The Lancia may be heavier and boast four- wheel drive and a turbo, but the 205 has that same combination of intuitive steering, exquisite body control and urgent acceleration that makes the Integrale such a satisfying country-crosser. However, while the Lancia achieves its aims with technology and grip, the Peugeot does it with light weight and finely engineered dynamics.

In fact, the theme of ‘balance’ seems to sum up the 205 GTi perfectly. The proportions of the three-door bodyshell, the cornering poise, the neatly matched combination of power and grip – Peugeot really got it right first time.

Within 12 months of the 205 GTi’s appearance, just about every rival manufacturer decided it needed a hot hatch in its range. Most hastily installed a turbo, stiffer springs and dampers, some easily stolen alloy wheels and garish graphics. Only the Renault 5 GT Turbo really succeeded, but the failure of the likes of the Lancia Y10 Turbo and VW Polo G40 to achieve the same credibility served to highlight just how exquisite the Peugeot 205 GTi 1.6 really was.

‘One of the many great things about the 205 GTi, especially the 1.6 is that ownership costs are no different from any other small French hatch,’ says Pete. ‘Parts are cheap, many can be bought over the counter from Halfords, and there’s no particular vice that’s so costly to put right it ends up writing the car off. Rust resistance is excellent. Peugeot deliberately designed-out rust traps in the Eighties, which is why you still see lots of 205s and 405s on the road.

‘Like the best Seventies Fords, the GTi is easy to exploit straight away simply because its ergonomics are near-perfect’

‘As well as this standard 1.6,1 own a heavily modified 1.9 with a 405 Mi16 engine; but it’s this one that gets used regularly. It’ll even do 40mpg if you drive it gently – how many performance classics could you say that about?’

Cornering ability is so good, you begin to wonder if it really does run on rails. GTI steering wheel encourages rally driver’s ‘quarter to three’ grip. Fuel-injected 1.6 loves to rev.