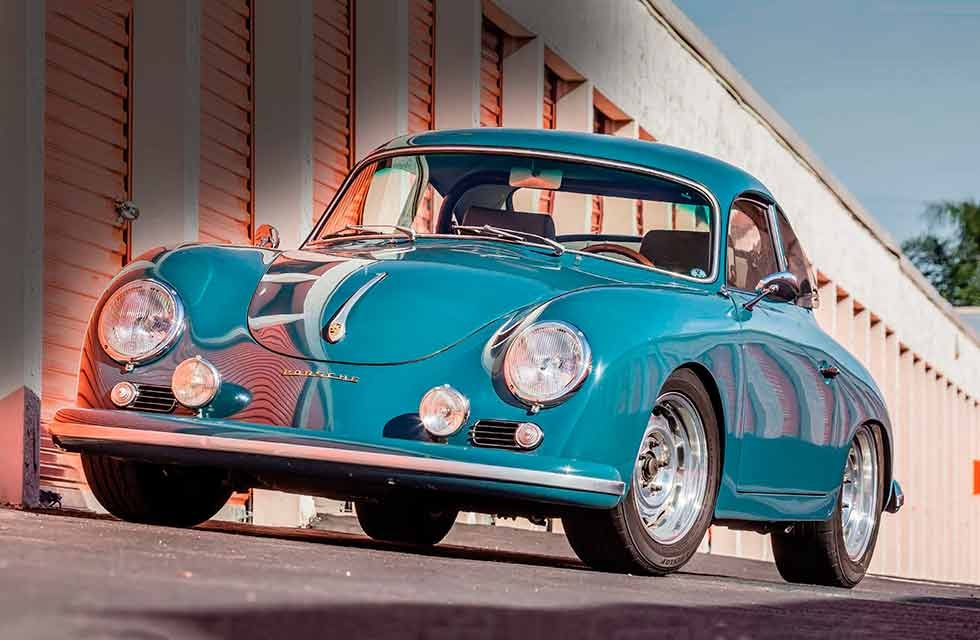 A three-year nut and bolt restoration is often a route to fair-weather usage for classic cars, but Ron Harris had other ideas for this ’1957 outlaw. Words: Alex Grant. Photos: Andy Tipping.

Preservation takes many forms among classic car owners, but the Porsche community is defined by its polar opposite interpretations of the word. Values might be rising across the board and there are a growing number of bought-as-investment cars disappearing into lockups, but the durability and driver appeal of those early cars is as much a lure as their ability to reap a profit. For every Porsche retired to a climate-controlled lockup, you’ll find another still facing four seasons and four-figure mileage in the hands of someone for whom usage is the best way to keep that engineering alive. Usability is a hallmark of the brand.

If you fall into the latter group, then a quality custom build speaks volumes – these are the cars that survive not only the rigours of road use, but the evolution of taste in the meantime without becoming dated. So it might surprise you to hear that this 1957 outlaw-styled Porsche 356A and the sympathetically-deployed modern technology within it were not only put together in the mid-2000s, but that owner Ron Harris has put more than 40,000 miles of road use on it since. That appeal hasn’t dulled at all.

“EVERY DETAIL WAS METICULOUSLY PLANNED…”

‘I had an idea that it would be great to build an outlaw for the road, but with the benefits of modern technology and safety,’ he explains. ‘It’s been a great little car, and a real part of my automotive and personal history.’

A little of that automotive history goes right back to Ron’s childhood. Raised in Long Beach, he recalls spending his formative years spectating at the nearby Lions Drag Strip, promising himself that he’d end up on the other side of the barriers one day. It wasn’t to be – family and work commitments put up bigger barriers than the raceway, not least of which taking over his father’s sizeable Better Beverages fountain drinks supply business in 1969. By the time he bought a ’1970 911T, in 1973, child-carrying capabilities outweighed driver appeal enough to cut ownership short, let alone allow time for any upgrades.

It wasn’t until 1983 that practical needs softened enough to allow space on the driveway for an irresistibly-priced ’1965 Porsche 356 SC. Waiting patiently had laid foundations for a long partnership – 25 years of ownership which would introduce him to the Porsche 356 Club of Southern California, progressing through membership to become president. It would also, by chance, introduce him to this 1957 ‘A’.

‘The car had been abandoned at a body repair shop in Bellflower, California,’ says Ron. ‘The owner was a friend of mine, and did work on my commercial trucks and cars. In 1998, I took a 356 SC to him to be repainted and discovered the ’57 coupé outside, partially covered up and rusting. It was essentially a rust bucket with one door totally caved in, but otherwise a complete car with matching numbers, and belonged to a customer who was going to restore it.

‘Fast forward a few years and the car was still under the cover. They hadn’t done any work on it. The owner of the shop was getting ready to sell his business, so I asked him about the car again. He said the customer had changed his mind and given him the registration papers in exchange for keeping the car there for a number of years. I told him I’d buy it off him for a minor amount of money, and he accepted.”

This was an opportunity for a later build, rather than a base car sought for ready-laid plans. At the turn of the Millennium Ron had been focused on vintage racing with another ’1965 356 SC coupé, sold on it being ‘the most fun you can have and still have your pants on,’ he says.

So chassis 101030 was carefully stored away from the elements for a couple of years while he worked out a plan of action – a classic road car, mixing Californian outlaw style with modern comfort and driveability.

Reviving the tired coupé was no easy task. Ron called in Porsche specialist, Andy Elsener Fabrication in Huntington Beach, to bring the bodywork back to life, fabricating factory-correct repair panels to banish the rust and introducing a few of the outlaw hallmarks. The $17,000 spent on metalwork included a louvred decklid, modified rear arches and transmission tunnel adapted to fit a 901 case. Nothing would be made up on the fly, and every detail was meticulously planned before any work took place.

‘When we were getting to the point of deciding the colour I met with an old friend, Dell Johnston, who had a 356 coupé in his garage painted Aquamarine Blue. I fell in love with the colour, which he told me was one of the rarest for that model year, and he suggested I use it. Ironically, around 2010, Porsche AG from Germany was at the Historic Races at Monterey with all the information for every car they had ever built. I always called it divine intervention, but they told me it was originally Aquamarine Blue!’

Mechanically, the 356 has been treated just as thoroughly as the restored body. Ron had a VW Type 1 engine bored and stroked to 2240cc, fitting ported heads and slotting 43mm Solex carbs atop Gene Berg inlet manifolds, breathing through a custom exhaust system.

Producing a dyno-verified 108bhp delivered via custom gear ratios and a ZF limitedslip differential, it’s a setup designed for long-distance drives, featuring a full-flow oil system to improve filtration and front-mounted coolers, too.

Of course, this required upgrades elsewhere. The 356 runs a trailing arm rear suspension setup from a ’1967 911S, gusseted for extra stiffness and fitted with custom Koni shocks and a larger-diameter 26mm torsion bar. Up front, the anti-roll bar was upgraded to a 19mm Carrera-spec item, while de-camber spindles help with alignment to go with its low-slung ride height. Lightweight Boyd Coddington wheels, aluminium replicas of the original steels, subtly add a little more width – at seven inches wide – and almost hide the 911SC disc brakes.

Despite its Lexan windows, roll cage and fire suppression system, this is not a track car for the road. The modern upgrades are neatly integrated, such as electric windows operated by flicking the original winders up or down, or the power steering noticeable only with a turn of its wood-rimmed wheel. Behind the driver’s seat – donated by an early 911SC – is a CD and MP3 player with satellite radio, operated by a remote under the dashboard. GT-style bumpers, period fog lamps, dealer-fit Coco floor mats, and the rev counter modified to read 8000rpm all show a fine attention to preserving the 356’s character.

‘It took the better part of three years to assemble the car. Fortunately, we were mostly upgrading to 911 parts, and they are more readily available and reasonably priced than 356 parts. There were certainly moments of frustration trying to get everything to fit the way we wanted, but patience prevailed and the end result was worth every minute of it,’ Ron explains. The miles it’s covered since back that up. When the 356 returned to the road in 2006, Ron’s presidency and love of being behind the wheel meant it quickly became a regular at club meets and road trips up and down the West Coast. By his estimation, runs up Highway One to the Pebble Beach Concours D’Elegance and Historic Races at Laguna Seca each year, along with the scenic routes he’d take home to Newport Beach afterwards, accounted for around half of its annual mileage.

It was the perfect backdrop, he says: ‘Driving up Highway One in California is one of the most beautiful drives in the world. And when you have a car that sticks to the ground like a formula race car, you can accelerate to your heart’s content without fear. My friends in Ferraris, Cobras and Corvettes would pull away on the straights, but I’d eat ’em up when we came to the curves. Pure ecstasy.’

And that positivity doesn’t only rub off on its owner. Never prone to taking a back seat, Ron helped develop an idea from a club member and co-founded the Friends of Steve McQueen Car Show with Steve’s only son, Chad. It’s a fundraising event for Boys Republic, a school for troubled teens that counts Steve amongst its former pupils, and has generated $2.5m over its 12-year history. Preparations were well underway for the 2019 show when we tracked down Ron’s outlaw.

But, this year, there’s change afoot. Ron and the 356 are parting ways, and specialist Porsche dealer and restorer CarparcUSA has been entrusted with finding a suitable new home for the outlaw from its lot in Costa Mesa. It’s the end of an era, but with a silver lining for its former owner: ‘The decision didn’t come easy. It’s just time for me to start thinking about unloading a few things, and working on the rest of my bucket list,’ explains Ron.

Meanwhile, the 356 offers a bucket list purchase for whoever is lucky enough to take ownership next. Modern technology and timeless style have not only preserved Porsche’s engineering, but a little of California’s car scene, too. It’s a living legend with plenty of life still ahead of it.