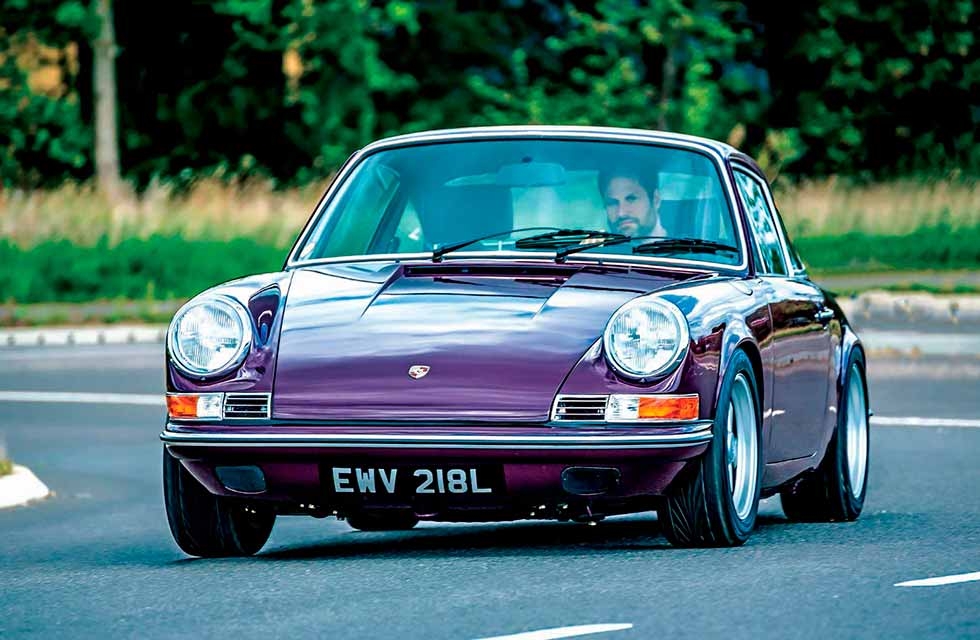 An unexpected discovery during a bare metal restoration turned out to be a hallmark feature of Workshop Seventy7’s latest 911 project. Words: Alex Grant. Pics: Andy Tipping.

Automotive fashions change quickly, with trends in colour, trim, and even entire model lines instantly defining an era in motoring. It’s fast moving enough that OEMs task entire teams with predicting what’s next in the wider design and technology world and carefully time launches to match, and it trickles down into classic cars, too.

Fashions shift values up and down without warning for standard cars – so for those restoring and sympathetically updating the oldest of the 911 stable, it’s just as important to stay ahead of the curve.

“SOME OF THE SUBTLEST DETAILS INSIDE ARE EASY TO MISS…”

‘We don’t build stock cars,’ says David Lane, founder and CEO of restomod specialist Workshop Seventy7. ‘It’s easy to keep doing the same thing, but I don’t want our Oshe cars to turn into a kit, so this one had to be different to Zero2, the first project car we built. The narrow body and the colour sets them apart. It’s a very tight, 1970s sports car style, and I really love that.’

Based out of the Royal Ordnance Depot in Northamptonshire, for several hundred years a production hub for munitions and equipment for the armed forces, David and the team might be relative newcomers but the business is quickly gathering pace. Newly expanded into a second workshop space, it’s added an in-house trim shop to its arsenal of services and word is spreading far beyond the UK.

The Oshe (pronounced ‘osher’) cars and bikes are the pinnacle of its restoration expertise; numbered, baremetal rebuilds with mild-to-wild hot rod accents woven in. If Zero2, the off-white, turboarched, 3.6-litre F-series 911 that put the company on the map, hints at its aggressive side, then Zero5 shows that inimitable sense of style translates just as neatly into a narrow-body 911, too. But that uncommon paint colour – one of the subtler hues from Porsche’s jelly-bean Seventies paint palette – wasn’t part of the original plan. With a close eye on auction listings, David picked up an early notification of a tangerine-coloured US-import 911T around 18 months ago. Running, driving and with an MOT, it had enough boxes ticked to follow up on straight away and the owner, surprised to get a call within seconds of the advert going live, seemed clued up and helpful. This was a good sign.

‘I took a little time to think about it and, when I called him back 20 minutes later he’d had three other calls about the car,’ says David. ‘Luckily he was keeping it for me, as I had phoned first. With at least three other people knocking on the door, it looked like a good car at a good price. So I caught the train down to Hastings and drove it back here the next day, with absolutely no problems.” A long life on the road hadn’t been overly unkind to the coupe.

It had the usual body patina and spliced wiring of a well-used classic, and some period-style add-ons including RS replica seats and black Porsche decals along the top of the sills. But it also hadn’t been a dry-state car before crossing the Atlantic and, out of sight, British weather had furthered some of that decay. Taken back to bare metal, the 911 revealed rot in the doors, kidney bowls, bulkhead and scuttle, as well as underneath the rear seats. And that wasn’t the only surprise it had in store.

‘The more we stripped it down the more evident it became that the car had been Aubergine originally. It was a good job, you couldn’t see any traces of it apart from behind one of the grommets in the bulhead and overspray in the doors. But we were more surprised by the amount of rust – it had a multitude of sins behind the paint,’ David recalls.

‘I spent a few days agonising over whether or not to take it back to Aubergine, which wasn’t really the du-jour colour it’s become in the last six to 12 months. Going back 18 months ago it was a bit of a gamble, not knowing whether anybody would want one in that colour.’

Bringing that decision to life was an easier process. As well as expanding its in-house facilities, Workshop Seventy7 has close relationships with a trusted group of partner companies. The bodywork, as with Zero2, was undertaken at race and supercar specialist paintshop Normandale in Daventry using a slightly darker shade of Aubergine than Porsche applied at the factory. A distinctive choice, but the gamble has inarguably paid off.

Not all of the contents of the Certificate of Authenticity had aged as well. The original owner had specced a beige leatherette interior, replaced here with a less divisive and more luxurious black-on-grey. Built as a tourer, the 911 is fully carpeted and fitted out with redesigned Cobra Stuttgart seats, featuring raised central bolsters and a retrim in soft Muirhead leather, matched to the three-spoke aluminium-centred Momo wheel and dashtop.

Some of the subtlest details inside are easy to miss. The door pulls are hand-made from timber, designed to work as an arm rest and were trimmed in-house, while the 917-style gear knob atop the short-shifter is made from recycled skateboard decks and colour-matched to the bodywork. All of the instruments were hand-refurbished at Workshop Seventy7, while SSI heat exchangers mean it’s all year usable, too – an aspect David was keen to retain. Where appropriate, the original car is carefully preserved. The 2.4-litre engine is numbers-matching, and even easier to justify keeping as it has the same strengthened magnesium 7R crankcase as the ’1973 RS. Of course, it’s been treated to the same care and attention as the rest of the car – stripped and vapour-blasted before being rebuilt by the team at Workshop Seventy7.

Doing so gave an opportunity to step up the driveability a little further. The North American market K-Jetronic fuel injection has been replaced with a pair of Weber IDA carbs more in line with the European specification, while Crane cams up the power a little further.

Behind the rear panel, the crossover four-can exhaust was built by Oliminium and matches the system on Zero2 in all except bore size. It’s inspired by a lightweight Jaguar E-type, rotated horizontally and emerging under each side of the number plate. The end result is an eagerly-delivered 175bhp and a moreish soundtrack to suit.

‘It’s the right kind of loud – it’s a Goldilocks system. You can start it up and not annoy your neighbours, but car boys and girls are gonna see and hear it and acknowledge it. So that’s kind of cool,’ says David.

Having been restrained with the power output, there was no need for extensive and ride-wrecking chassis upgrades to cope. This was the first pre-’1974 911 to be fitted with KW Variant 3 adjustable shocks, while steering and cornering responses are tightened further by selective polybushing of the powder-coated and zinc-plated components underneath. In turn, the 5.5-inch Fuchs it came with wound up tucked under the arches during the build, while David came up with a solution for the laid-low coupe. It’s a classic combination; 7×15-inch Braid RSR wheels wrapped in Toyo T1-R rubber, with RS-spec ATE brakes behind, making this a confidence-inspiring lightweight driver’s car for the winding route home, or a laid-back tourer for long-distance hauls.

‘It’s only 1080kg wet, so it’s not heavy at all,’ continues David. ‘It’s got a lot less power than Zero2 but, because it’s so light, it’s a lot of fun to drive. You can really crank it and keep your foot planted, so it feels really lively and quick. You’re constantly trying to make this car go as fast as it can, without worrying that it’ll let go. That’s part of the fun.’

Perhaps even more fun than he’d expected. Since Zero5 was finished earlier this year, it’s spent the summer show season accompanying Zero2 as a sign of what the Workshop Seventy7 team is capable of, but it’s also being used as it should between static outings. That now trophy-winning style, and the playfulness of the drivetrain and chassis is becoming a hard all-rounder to part with.

‘You can end up sweating over the details and sacrifice the best part of a car like this, which is driving and owning it, so I’d like to do that for at least a year,’ he says. ‘So it’s done and I should sell it, but I had the two cars parked next to each other at Early Edition this year, and I was struggling to choose between them. One is bigger and stronger, the other is a very pretty almost stock-looking coupe. It would be hard to let either of them go.’

One thing is for sure, though, no matter which of the two leaves the stable, it should have no problems finding a home. From wide-arched hot rods to enigmatically-hued stock-looking coupes, Workshop Seventy7 is developing a strong track record of being one step ahead of the ever-changing world of automotive fashion. It’s a solid foundation for wherever the business goes next.

Above left to right: Underbonnet (boot?) detailing matches that seen throughout the car; 917-style gear knob was made inhouse and colour-matched to the car; 2.4-litre ‘T’ engine is fed by a pair of 40IDA Weber carburettors. Below: Workshop Seventy7 enjoyed the challenge of building a narrow-bodied car at a time when most seek the wide RSR-inspired look. Above: The Aubergine paintwork really stands out – it was a brave decision to paint the car this colour but the end result is stunning. Below left and right: Interior features redesigned Cobra Stuttgart seats, with raised central bolsters that are trimmed in soft Muirhead leather. Momo steering wheel adds a classic touch. Above: From behind you could be forgiven at first for thinking this is a tastefully done restoration, but the bark of the exhaust note soon suggests otherwise. Below left: Bespoke exhaust system made by Oliminium not only looks good but sounds good, too. Classic style is emphasised by touches of chrome. Below right: 7×15-inch Braid RSR wheels are wrapped in Toyo T1-R rubber. Above: The latest project from Oshe is full of subtle details that give it a classy yet classic look Below left: ‘We don’t build stock cars,’ says David Lane, founder and CEO of restomod specialist Workshop Seventy7. ‘It’s easy to keep doing the same thing, but I don’t want our Oshe cars to turn into a kit…’