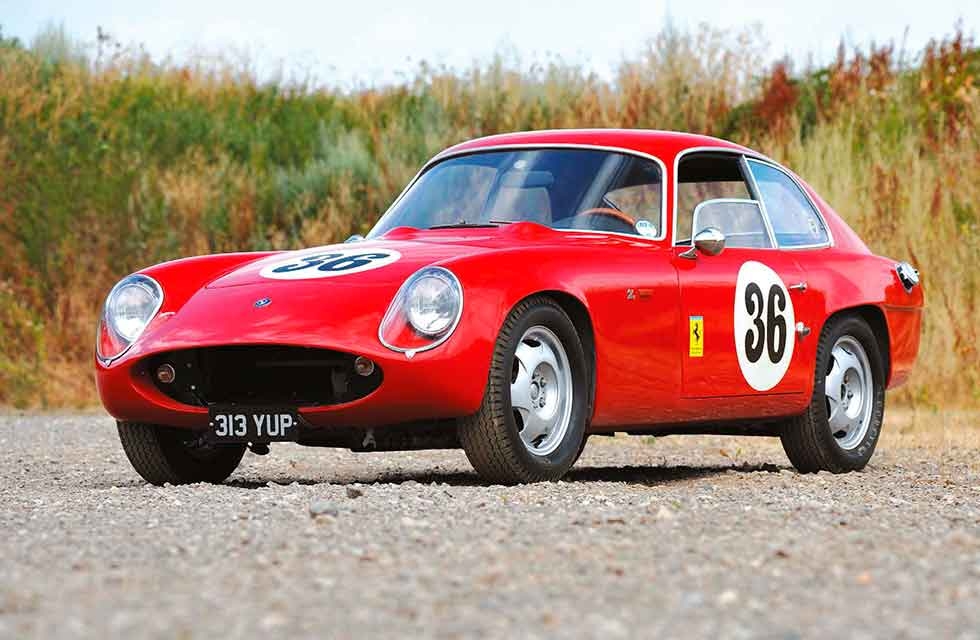 The French Connection Ex-Le Mans Zagato-bodied racer. This is one of a pair of OSCA 1600GTs that competed in the 1962 Le Mans 24-Hours race. How does it drive? It’s time to find out… Story by Simon Park. Photography by Michael Ward.

Howling contentedly along my favourite fast stretch of the B4425 in Gloucestershire, it is quite easy to imagine the tension that John Gordon might have felt, tearing rather more breathlessly down the Mulsanne straight at Le Mans in this self-same OSCA 1600GT, in the late afternoon of 23 June 1962. He had been clocked there doing just 99mph – slower even than both the 1200cc Lotus Elites and the Abarth-Simca 1300s. So the question was not if, but when, he’d be blown sideways by the passing 4.0-litre Ferrari 330 TRI/LM, which topped 180mph there in practice and which would, the following day, put Phil Hill and Olivier Gendebien on the top step of the podium.

By then, however, the OSCA’s crew, John Gordon and John Bentley, were doubtless in a far more relaxed frame of mind – feet up with a nice cold beer, probably – since the car’s twin-plug twin-cam engine had cashed in its chips after a meagre 12 laps due to a bearing failure. For the two Americans, both seasoned competitors in SCCA racing back home, it was a disappointingly early bath – although Bentley, who was in fact British-born, never even got to drive this time.

“The back end was ready to step out pretty quickly if pushed too far, too fast”

The two Johns had first teamed up in 1960, with the joint purchase of an OSCA 750. That year had seen them win the Index of Performance at the 12 Hours of Sebring and finish a creditable 18th overall at Le Mans in another 750, entered by Luigi Chinetti’s North American Racing Team (NART). Back again at Sebring, in March 1962, they won their class in their own 750; and that same race saw the competition debut of the 1600GT – although the sole example, also entered by NART, failed to finish.

But the success of the Gordon/Bentley duo in the older 750 didn’t go unnoticed on planet OSCA, and an approach from the Maserati brothers offering them a ‘works’ drive in a 1600GT at Le Mans, in June, was soon forthcoming. Mind you, they had to buy the car – for close on $7000 – but it came with ‘factory support’.

Chassis 0036 was a top-of-the-range GTS variant, complete with twin-plug ignition and 140hp. It was one of two 1600GTs entered, the other being chassis 007, for Jose Behra (Jean’s younger brother) and another American driver, George Arents. That car fared rather better than 0036, running for 22 hours before its transmission failed.

By the end of 1962, Gordon and Bentley had returned their car to the USA where they quite quickly sold it, transferring their allegiance to a Lotus Elite. Whatever their feelings about the OSCA, they must have had a quiet chuckle when, back at their happy hunting ground – the 12 Hours of Sebring, in early 1963 – their Lotus completed 151 laps for 38th place, 12 laps and two places ahead of 0036.

Elvio Deganello gave us an exemplary summary of the 1600GT’s gestation and history in Drive-My, and it was shortly after this that I stumbled across 0036 whilst on a visit to The Classic Motor Hub (to see a man about a Lancia, as it happens). Details of the OSCA’s comings and goings over the last half-century would probably fill this entire magazine; so suffice to say that, 56 years after its debut at La Sarthe, it has popped up in the Cotswolds – and it’s wearing its years exceedingly well.

Of the 128 1600GTs built, 98 wore Zagato bodywork; and you can’t walk past it without pausing, for a moment at least, to ogle and wonder at Ercole Spada’s fabulously elegant architecture. There are few prettier mid-20th century GT cars, from the perfectly profiled fastback and low waistline to the very beautiful, very rare (virtually irreplaceable) Amadori magnesium wheels. ‘But wait!’ I hear you cry – ‘What about the double bubble roof?’ Well spotted. Since OSCA built this particular car specifically for Le Mans, it may have deleted the bubbles for aerodynamic reasons. Who knows? Whatever, 0036 is believed to be the only 1600GT Zagato with a flat roof.

Even more obscure is the question of the rear suspension. Anecdotally, the 1600GT chassis came with a proper independent rear end, via double wishbones and coil springs; but there was a simpler version, designated ponte posteriore rigido (‘rigid re axle’), with which 0036 was equipped. Unfortunately, OSCA’s record-keeping was typical of Italian manufacturers at that time – to wit, a dog’s dinner – so we have no way of knowing exactly which cars came with what, or why. We do know that 0036 ran at Le Mans with a four-speed gearbox, but I can vouch for the fact that it now has five forward gears – and one backward one as well, apparently, although I never found it.

However, everything else is pretty straightforward. A comfy bucket seat and a good driving position are a good start. Visibility in all directions is admirable, too – although the price of the generous fenestration was a poor Cd figure, contributing to its tardiness on the Mulsanne straight. Ahead of you, there’s an 8000rpm Jaeger rev counter (with no red line), a hilariously optimistic 260km/h (161mph) speedo and a full set of smaller gauges.

Getting up and running requires plenty of revs to overcome some initial fluffiness, typical of high performance engines of the period with this sort of specification. Another change over the years has been to the carburation. In 1962, it ran with twin 45 DCO downdraught Webers rather than the 42 DC03s currently fitted. In fact, OSCA’s original engine data specifies the smaller size, so how the 45s got there is conjectural. A direct comparison between the two would be interesting, but as it is, once you’re up to around 4000rpm or thereabouts, the motor has cleared its throat and settled into a smooth, hard bellow.

Noise there is aplenty; but even allowing for my wariness of running right up to 7000rpm, where peak power reputedly lies, straight-line thrust was a bit less than I was expecting, and one wonders if a rolling-road session might not now be in order. In any event, this is an engine that demands and thrives on revs – which is how it should be in a 1960s Italian racer. The gearchange is quite slick but the synchromesh prefers not to be rushed. It steers crisply, too – nicely linear, with little free play on the wheel. For our road test, Minilite wheels replaced the Amadoris and 175/70 R15 86H Avon radials were fitted, in deference to the originals’ age and rarity.

Back in the day, John Gordon declared himself unhappy with the performance of the Girling disc brakes; but whilst they feel initially a bit ‘dead’, they work well enough now when pushed hard. 50 years of fettling has obviously improved them – no surprise there. But another of Gordon’s observations did ring true. The OSCA is quick to turn in, and grips well. But with the rear-mounted, 80-litre fuel tank full to the brim (as it would have been at Le Mans), weight was heavily biased rearwards, right over that rigid rear end. I only had a little fuel on board, but still sensed that the back was ready to step out pretty smartly if pushed too far, too fast. And a rear track 52mm narrower than the front doesn’t help here, either.

But let’s not overstate the case. With a little more time and practice you’d soon learn to adjust your inputs to the car’s behaviour which, generally speaking, is sweet and secure. The Maserati brothers’ last GT might never have gone on fully to realise its potential on the track, but who cares? It’s a lovely place to spend time, and when a car is as beautiful as this, you can forgive it just about anything. If I were a fair bit younger and a great deal wealthier… Oh well, dream on.

BRAKES: Girling discs all round

This is a noisy, dramatic animal in action, if ultimately not super-fast. Steering is crisp and direct. This is the only OSCA 1600GT Zagato without a double-bubble roof – possibly for aerodynamics.