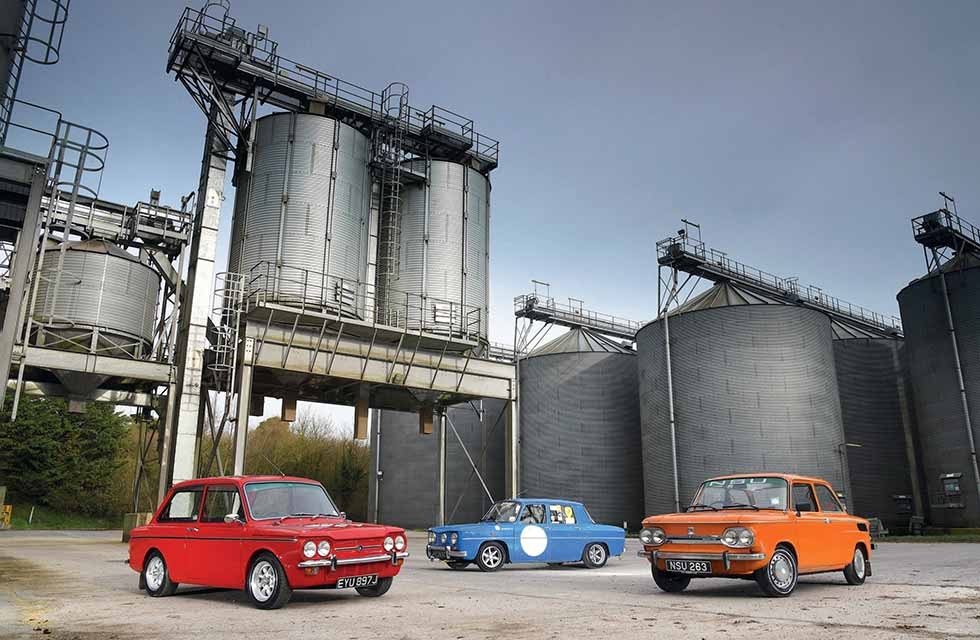 STINGS IN THE TAIL

Rear-engined baby saloons with a kick from Rootes Group, NSU and Renault

On a quiet patch of Wiltshire Tarmac sit three members of a now-extinct species. Rear-engined family saloons and their go-faster sisters were popular in post-war Europe, but they ceased production long ago – victims of motoring evolution. Once Europe’s economy had revived, the motor industry shifted its focus from necessity to entertainment. This Continental trio of performance- pushers is presented in different states of tune, from showroom original to slightly breathed-on to full-bore Group 2 contender.

‘The servo-assisted discs work well, baling speed, as the R8 pops and bangs on the overrun. Steer and it just responds and grips’

The lineage of the Renault 8 goes back further, via the Dauphine, to the wartime developed 4CV. The 8, released in 1962 and later known as the R8, was the first Renault powered by the long-serving Cléon-Fonte overhead- valve ‘four’. The only four-door here, the Philippe Charbonneaux-designed 8 is gleefully perpendicular and nonchalantly boxy.

Even in live-axle Britain, the appeal of Renault’s rear-engined cars was understood. The cars attracted painful Import Duty, yet tuners such as VW Derrington and Alexander Conversions offered go-faster bits for the 4CV and Dauphine among listings for domestic fare. The 8’s potential was obvious to gifted engineer Amédée Gordini, nicknamed Le Sorcier, who had a long and close relationship with Renault.

The Hillman Imp was the answer to several problems in 1963: the Suez Crisis petrol shortage, a hole in the Rootes Group’s range (the 1-litre class was dominated by BMC’s Mini), and press criticism of the company’s staid engineering. Britain had experimented with rear-engined cars before, but none had made it into mass production. Powered by a 875cc engine, based on the Coventry Climax FWMA unit, the Imp was a clean-sheet design executed under Rootes’ technical director Peter Ware. Its Bob Saward styling owed a nod to the Chevrolet Corvair, to a lesser extent than Claus Luthe’s NSU, but the Imp was put into production six months before it was ready – unlike the NSU. Naturally, the Imp was subjected to Rootes’ full-blooded fetish for badge engineering.

Its first performance model came in late 1965, with the homologated run of 1000 Hillman Rallye Imps and Singer Rallye Chamois. A 998cc Rallye won the 1965 Tulip Rally. Production 875cc performance models followed in late 1966 – the plush Singer Chamois Sport and the cheaper Sunbeam Imp Sport – and ever since the Imp and motorsport have got along famously.

Two years later, the MkII Sunbeam Imp received some interior tickles and a new dash. In April 1970, when the Chamois Sport was dropped, the name changed to the Sunbeam Sport and a September facelift incorporated the four headlamps of its coupé sibling. Unlike the Stiletto model, the Sport remained in production with the Imp to the end in March 1976, by which time Sport production totalled 10,336. Tony Armes’ 1971 NSU 1200 TT is an original UK car in factory tune. It doesn’t shout about its go-faster inclination, save a couple of subtle badges and those quad headlamps. Compared to the lowered, rip-snorting TTS hillclimbers, the endearing TT looks almost timid and self-conscious. Yet those narrow tyres and track, that stretched wheelbase and those wing-top parking lights give it a great deal of charm.

The TT is the only car in which the seat is not fully back on its runners. Its floor-hinged pedals, including a tiny throttle that clings to the wheelarch, are the least offset. Aside from its ribbed and drilled two-spoke steering wheel and colourful 8000rpm rev counter, the quality cabin is sombre and oh-so Teutonic.

The accelerator looks and acts like a button. The gate on the gearbox is incredibly fine, the change is long and almost flaccid. Purring away, the overhead-cam ‘four’ is refined, happy to be extended, and revs sweetly without coarseness or obvious breathlessness as the needle stretches further around the dial, honing in on the 6500- 8000rpm red zone. Above 4000rpm the note becomes more urgent and focused, filling the cabin with its intent and a gentle high-pitched whistle. It doesn’t set the road alight, nor does it feel slow; the TT is about building and maintaining momentum.

Battered and broken bitumen does not bother the TT’s supple ride, unsettle its concentration or agitate the light, positive steering. Being the only standard car here, the NSU’s body roll is obvious and controlled, yet it never dulls its cheeky agility on this sweeping, open B-road. It has an uncanny ability to relax its driver. Despite lacking a clutch rest and a brake servo, it’s easy to imagine clocking up large mileages in this captivating, eccentric pot of orange.

Gary Mathew’s mildly fettled 1971 Sunbeam Sport is more of a glamorous pin-up. It is impossible to pick apart its design, proportions or gutsy stance. The Imp remains one of Britain’s greatest motoring tragedies.

Sitting under the generous glasshouse, in a spacious interior that has been subtly customised, it feels like a museum exhibit. The Sport’s top-hinged pedalbox, although offset, has plenty of room. In the Sunbeam Sport, the MkII dash was effectively downgraded to Super Imp specification (cheerio rev counter), so while it looked more fashionable, it was less ergonomic and comprehensive than the standard model. The MkII addressed the original’s positive camber and handling issues, and this car has wider alloys wrapped in 175-section rubber, rather than the factory 155s. The front wheels fidget and tramline on rough Tarmac. The gearing of its rack-and-pinion steering, though, is impossible to criticise; its weighting, speed and feel are immensely enjoyable. When cornering is so effortless, flat and fun, the servo-assisted brakes remain reserved only for the unexpected.

Aside from shorter front springs, the front suspension is as Rootes intended – unlike the engine. In the back is a 1020cc unit with a fettled cylinder head, big valves, high-lift cam, flowed inlet manifold, a four-branch tubular exhaust manifold and an oil cooler. Slightly less refined than the TT’s directly air-cooled single-overhead- cam motor, the Sport’s engine note develops a hint of menace above 4000rpm as it limbers up and starts to sprint. Gears swap with a wonderfully defined and precise remote gearchange. Leaving a thoroughly sorted Imp, a grin comes with you.

If there is a link between rear negative camber and fun, then Nigel Patten’s 1965 Renault 8 Gordini should be a hoot. Since its restoration was completed in 1982, this now Gotti wheel-shod Group 2 1300 Gordini has competed in Tarmac rallies and hillclimbs every year. Its wonderfully dulled, bubbled and dinged patina only whets the appetite further.

The interior is slightly chaotic, with auxiliary dials perched on the dash, eyeballing the driver. The cabin is seasoned with the dust of action, and the faint but unmistakable whiff of petrol. A bucket seat and five-point harness have me clamped in position, which feels high and creates the illusion that the Gordini is narrower than the TT. The chunky steering wheel is so close to my chest I can almost steer with my sternum. Then I clock the only curve in the Gordini: the long, arcing gearlever for the five-speed ’box.

The spinning gears whine, soon overwhelmed and washed away by the guttural voice of the 120bhp four-pot. The bonnet gently bobs, while the quick-rack steering acts as advertised with information sizzling through the wheel. Frontend reactions are quick and feel roll-free.

The competition clutch is abrupt, the long-throw gearchange exacting, but caution is required when selecting second because an unprotected reverse hovers by its shoulder. The servo-assisted discs work well, baling speed when necessary, as it pops and bangs on the overrun. Steer and it responds and grips: you’re soon back onto the throttle for more loudness. The ride and body control compromise is so well resolved that it’s happy on a public road.

The free-revving overhead-valve engine is frenetic, humming and hollering urgently through its throaty exhaust. Power is progressive, the push turning to a healthy shove beyond 4000rpm.The 8000rpmrev counter is free from red paint, but a compromise between exuberance and consideration kicks in at 7000rpm. The Gordini is running on road tyres, but cornering is restricted only by mechanical sympathy.

Picking a winner would be both unfair and futile, for each car possesses a different character and has benefited from an equally divergent approach to classic ownership. All provide a fun and absorbing driving experience, far removed from the rear-engined car’s widowmaker reputation. It’s enough to make anyone go quiet at the sad realisation that they simply don’t make them like this any more.

Various states of fettling and tuning reveal themselves through bends, from the tight Gordini to the roll of the NSU. But the boxy styling trait is shared across the collection – so too the racing heritage. Right column, from top: twin Solex carbs push the NSU to 65bhp; cylinder heads among other things differ on Hillman’s version of the Coventry Climax unit; tuned Gordini is up to 120bhp from 95bhp. Left column, from top: spartan NSU interior with two-spoke steering wheel; Imp Sport cabin was reined back compared to Chamois Sport edition; R8 Gordini’s competition Sparco seats and dials.

Clockwise from main: straight lines and angles aplenty on Renault’s boxy four-door; Nigel Patten is a veteran of numerous rallies with the potent 8; Gordini’s Renault link began with the Dauphine.

Clockwise from main: Signal Red was one of six colour choices for the Imp, which also has Corvairesque lines; owner Gary Mathews; the Sunbeam Imp’s aim was to attract the more sporting driver.

Clockwise from main: Corvair styling influence looms large on the Prinz TT; owner Tony Armes has preferred originality over tuning; TT badge recalls ‘bike victories on the Isle of Man in the 1950s.