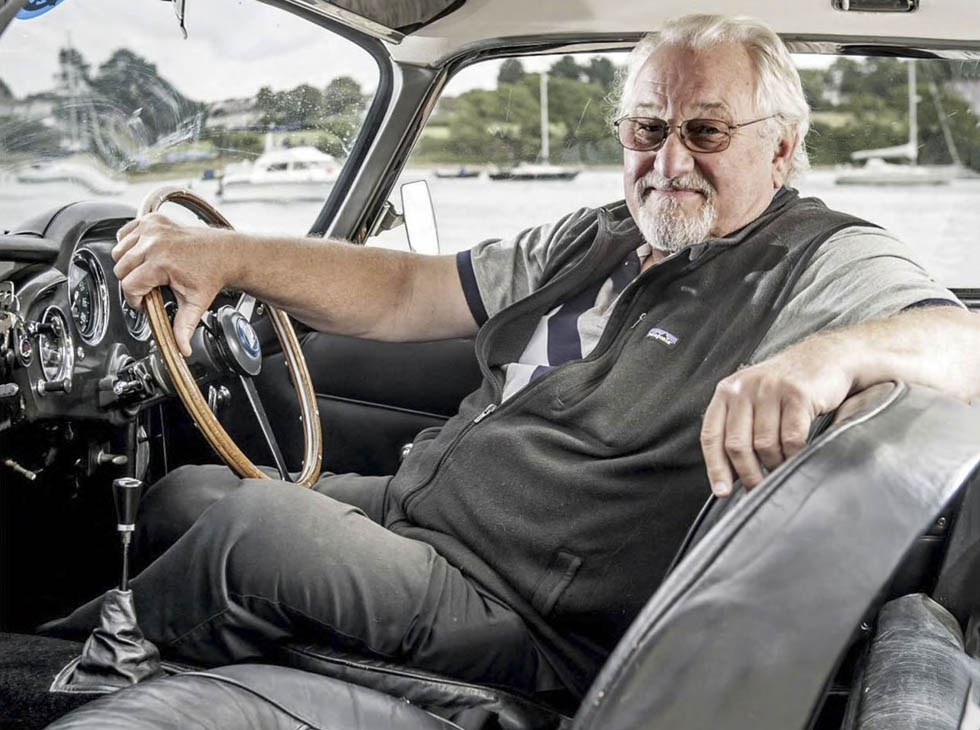 Life In Cars Nick Faure’s lifelong passion for Porsche explains his 356 and various 911s, but what about his old Volkswagen Beetle, Mini Cooper S and Alfa Romeo Giulia Spider?  ‘I bought my first 356 for £600 through a magazine advert’ Nick Faure, aka Mister Porsche, the man whose on-track exploits helped forge the marque’s reputation, tells Classic Cars about the standout cars in his life. Words Mike Taylor. Photography Laurens Parsons.

Photographer, commercial artist, racing driver and car sales entrepreneur Nick Faure’s name has been linked to the world of motor sport since the early Sixties. His successes with Porsche at a time when the marque’s reputation was still in its infancy quickly led to the moniker Mister Porsche, a name which still stands firm today.

His father perhaps inspired his love of fast cars. ‘He always bought specialist models, including a Jensen 541S and a Mercury Comet. He also had a string of Bristols – a 405, a 406 and a 407.’

Nick attended Stowe School in Buckingham, and regularly rode to Silverstone on his bicycle to watch his idol Stirling Moss practising. ‘He was able to race several different cars very effectively at the same venue,’ smiles Nick. ‘He was the only racing driver I ever listened to or read about during my impressionable teenage years from 15-17. His skills with gears, driving line and so on fascinated me.’

‘After I left Stowe in 1962 at the age of 18 my parents sent me to be a student in Switzerland, where I enrolled on a business studies course. My father Freddy gave me £1000 to put into a Société de Banque Suisse bank account, which had to fund my living costs. The VW Beetle was considered to be very reliable, so my father bought one for me. It cost £200, it was a 1957 oval rearwindow car and I drove it all over Europe.

Some of my best friends were Dutch, so I’d go up the autobahns sitting at 70mph for hour after hour, foot flat to the floor. It had a rack on the engine cover to take skis, and friends would stand on the back bumper to help me gain traction in deep snow.

‘It taught me a lot about car control. The winter of 1962/63 was particularly bad and it was a question of delicate use of the throttle, braking and steering, which stood me in good stead later when I began to compete in autocross.’

‘My elder brother Howard fired my passion for motor sport – he was a rally driver and I was determined to beat him. When I went out for the first time in his Downton-tuned Mini at Castle Combe circuit, within a short time I was equalling his performance – and by the end of the day I was quicker. In competition driving, it helps to have an artist’s view of the circuit – it’s about making a picture of the track in your mind. I also have a photographic memory – I learnt the Nürburgring circuit in six laps. ‘In 1964 I bought an 848cc Mini and made a start. Having completed four events, I was able to apply for my full international competition licence and entered the Mini 7 Championship. The following year I bought a brand-new 970cc Mini Cooper S from Wadham Stringer in Guildford. It had been on display in the showroom for about 12 months. The list price was £525 and I managed to buy it for £475. What I didn’t realise was that it had been fitted with oversized pistons, taking the capacity out to 999cc – it revved like crazy.

Nick (right) and college friend Lance with his Beetle on the Costa del Sol.

‘One day I saw Stirling Moss’s Mini Cooper standing outside RobWalker’s workshops in Dorking. I was too shy to approach him, so I waited for Stirling to come out and then chased him up the road, passing him at one point. Then the great man overtook me and waved as he passed. ‘That year I achieved four first-in-class wins and won the Mini 7 Championship outright. In 1966 I had one first-in-class and a third overall in the 6-Hour Relay Race at Silverstone in August. I became very attached to that little car. It made me want to go on to do other more competitive events and led to my buying an Alfa.’

‘I think the Giulia Spider 1600 was one of the prettiest of cars, with a cracking twin overhead camshaft engine. I love the shape and the look of the Giulia, there’s something very special about it. I just wanted to own one so, sadly, the Mini Cooper S had to go. ‘I answered an advert from a guy who lived in Brighton. The Alfa was only a year old and it looked gorgeous. The chap said, ‘You will find that an Alfa Romeo handles and drives like no other car. You can drive it as fast in the wet as you can in the dry.’ I thought that sounded crazy, but it was true. ‘I raced it in Italy. It was fitted with Cinturato tyres and on one occasion it was raining and my little Alfa was running rings around everyone. I learned lot from that car and while I know it is very fashionable to stiffen the suspension so the car handles like a go-kart, if you do it to an Alfa Romeo you lose a lot of the drivability. I loved Alfas so much I later sold it and bought another 1600, and changed it to rally specification.’

‘My love affair with Porsche began while I was a student in Switzerland and mixing with the offspring of wealthy parents. One such parent bought his son a Porsche Super 90 T6B. I remember him taking me out in it for the first time – the feeling of quality and togetherness with the road was completely mesmerising. It was something I’d never felt before. Like the Alfa, it had very nice, delicate steering. I decided I must have one. ‘I bought my first 356 for £600 through an Autocar advert, a Super 75 Cabriolet. I could really thrash it, the engine felt unburstable. It was a lovely car.

‘I realised that the trick about driving a Porsche is never to grip the steering tightly; let the car talk to you, let it feel the camber changes in the road, let it flow. I learned opposite-lock cornering, taking my hands off the wheel and letting the steering selfcentre on its own, just using the throttle.’

‘In the Sixties Porsche Cars GB was struggling to sell cars because they were so expensive, so publicity through successes in racing and rallying was paramount. Vic Elford persuaded them to let him enter a 911 in rallycross events, in which he came up against Roger Clark in a Lotus Cortina. The Porsche emerged covered in dents, but Porsche forgave him because of the publicity. Then they put the car up for sale. I sold my grandmother’s Albrecht Dürer and Rembrandt van Rijn paintings along with a comprehensive stamp collection. In 1967 I bought it and began racing.

‘I campaigned it in the British Saloon Car Championship in 1967 and 1968. But sadly I couldn’t even afford to buy new tyres. Porsche Cars GB stepped in, taking over the running costs. Immediately, I was racing against Frank Gardner and Brian Muir. For the first time, I led an international race at Silverstone; when I entered Copse corner the rest of the pack were growling down my mirrors. It was the most exhilarating feeling I’d ever experienced. For 1969 I drove for the Demetriou Group and got three fourthplace finishes, which gave me 16th overall and fourth in class in the championship. When the season was over, I sold the car.’

‘Having campaigned a 911, I wanted one that I could drive every day, so in 1974 I bought an orange 2.2-litre 911S. Driving it felt like putting on a glove. I kept it for some time. That same year I was also invited to drive the Carrera 3.0 RSR for Ecurie Belge with Jean Blaton of Beurlys fame at Brands Hatch. This led to competing at the Le Mans 24 Hours, my best performance being in 1975 when we finished sixth overall.

‘I’d planned to race at Le Mans in 1986, but a week before the event I got real fear; we were expecting our first child in September and because I’d survived 11 years of participation it was time to stop. It was a dangerous high-speed event and I’d seen many accidents, some fatal.’

‘Throughout the early Seventies I was working on Fleet Street as a graphic designer. Then I decided that my over-riding pleasure was in cars and if I could make a living out of it, great. I set up a business with a partner. Sadly it didn’t last, so I moved into selling classic cars and then exclusively Porsches.

‘It was around this time that I bought a bronze 1974 911 Targa. It was just like my first 911 – the driving experience, the sense of quality in its build and the exquisite handling qualities.

‘Even to this day, all air-cooled Porsches share that same feeling. My girlfriend and I took it on holiday many times, often touring round the south of France.

‘I only sold it when it was beginning to get very tired.’

The One That Got Away

‘I’ve been fortunate to drive quite a few Aston Martins over the years, including DB4s, 5s and 6s. The Series II DB4 is light years ahead of them all. It is everything a true driver could want. Plus it was hand built, the quality is superb. It’s gorgeous; it is sex on a stick.’ 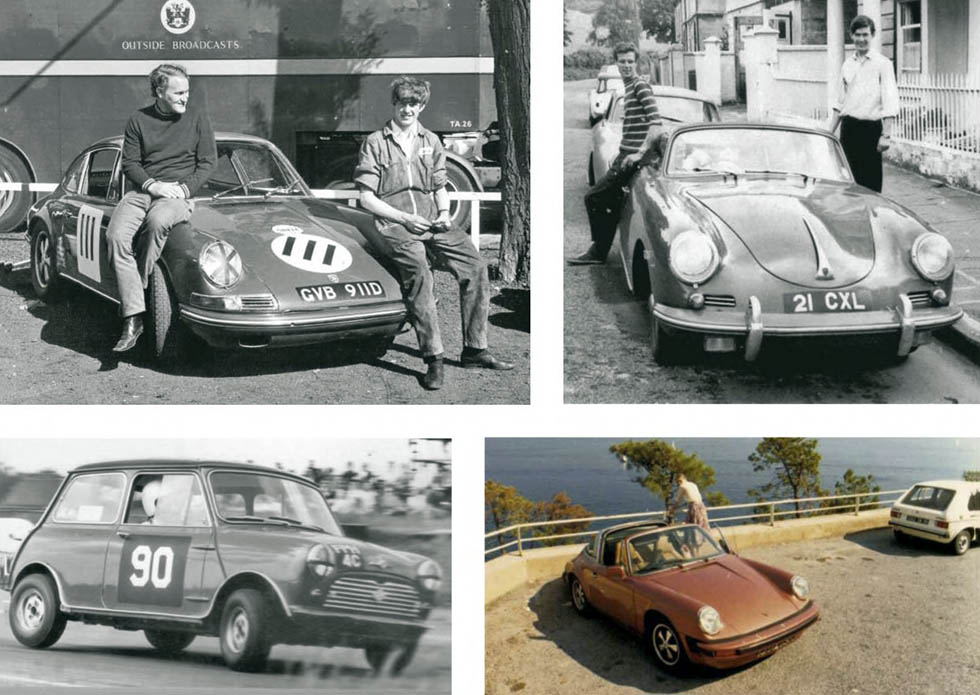 Nick Faure (left) tests out the ex-Vic Elford 911 rallycross car’s suspension balance with one of his mechanics. After sampling a friend’s Porsche 356, he had to get his own – this Super 75 Cabrio. Nick and his Mini Cooper S at Snetterton in 1965, on his way to championship victory. Nick wasn’t afraid to rack up big mileages in his 911 Targa, making several trips to southern France. 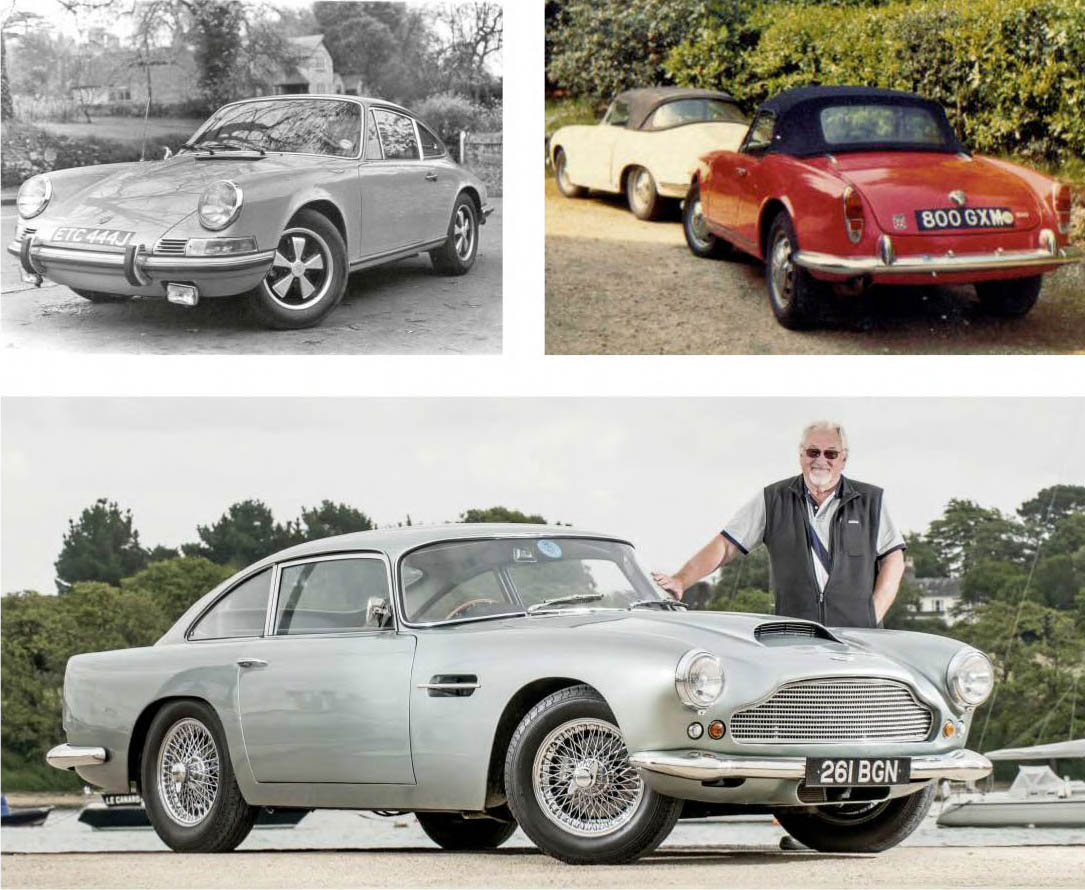 Pounding racetracks in Porsches meant Nick wanted one for the road – this 911S. Afla Romeo Giulia Spider was one of two Nick owned – he still raves about the handling. Nick’s driven many Aston Martins, but the DB4 Series II is by far his favourite, and the car he wishes was his. ‘It’s gorgeous; it is sex on a stick’ Nick Faure and the car that got away – an Aston Martin DB4.