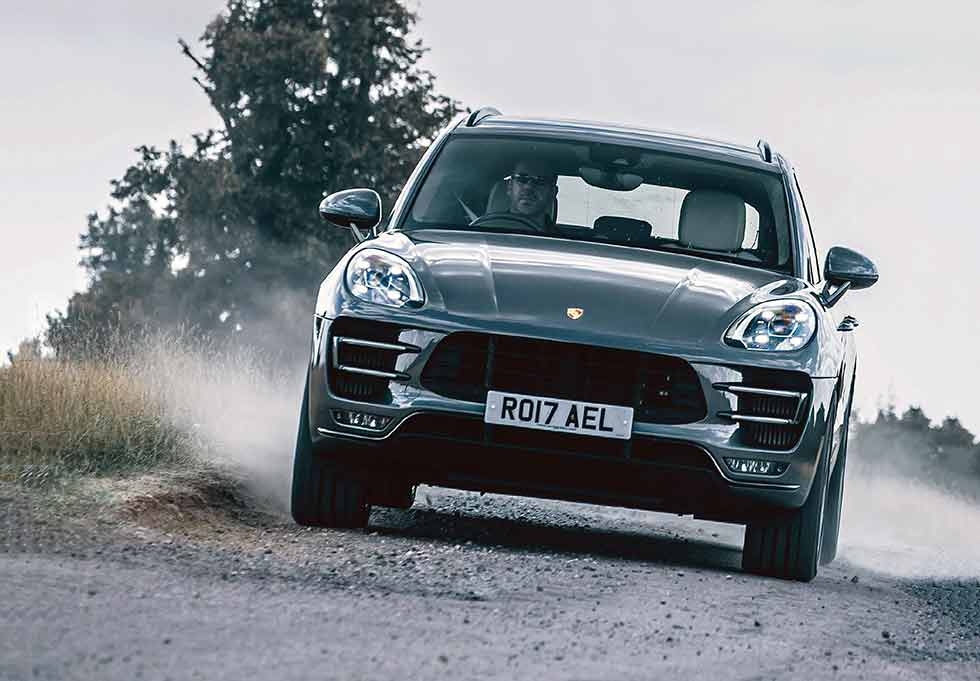 Packing Heat… As Porsche reveals the new Macan, we revisit the current model in its most powerful guise – the Macan Turbo with Performance Package… Story: Simon Jackson. Photography: Malcolm Griffiths.

Porsche might see itself as a sports car manufacturer and nothing less, and as brand aficionados we might be inclined to agree, yet consulting the cold hard facts reveals an alternative reality. Porsche is now primarily an SUV manufacturer which also makes sports cars on the side – and with good reason. The rise and rise of the SUV is undoubtedly a story that, in automotive terms, defines our times. Yet, while the Cayenne might have been Porsche’s first steps into this realm it is the success of its second offering, the junior number, which has truly served to change Porsche’s emphasis and to some degree, its fortunes.

Since its inception in 2014 Porsche has delivered more than 350,000 Macans worldwide. That’s a staggering number which means that the baby Porsche SUV outsells the 911 by a considerable margin. Porsche will argue that its SUVs are not just grocerygetters or mere prestige tools for the school run, rather that they are actually sports cars in their own right. Some might smirk at this notion, but those same folk should take time to drive these cars before passing a definitive judgement. The Macan has been a class-leader in the compact luxury SUV segment since it first arrived on the scene, but moreover a big reason for its popularity is its ability to blend practicality with sporty driving dynamics. There are two prime examples of this; the Macan GTS and the Macan Turbo – two performance orientated machines easily capable of wiping the smirk of the faces of any non-believers.

Excluding the special order Macan Turbo Exclusive Performance Edition, the range-topping model is the Macan Turbo with Performance Package. It unashamedly uses as its basis the Macan Turbo and dials its prospect up to 11, offering further enhanced driving dynamics and increased agility over its sibling models. It does this by taking the twin-turbocharged 3.6-litre V6 petrol engine found in the Macan Turbo and increasing its power output from 400hp to 440hp. In addition it adds 37lb ft more torque in the low- to mid-range making the grand total 443lb ft. That helps shave four-tenths of a second off its already rapid 0-62mph time of 4.8 seconds, meaning a model equipped with the Performance Pack can hit the milestone speed in just 4.4 seconds before going on to top-out at 169mph – 4mph more than the ‘normal’ Macan Turbo. However, it is not entirely about headline figures here, for it is where that extra grunt is delivered which is important – 49mph to 74mph can be racked-up in 2.9 seconds, two-tenths quicker than the car upon which it is based. That makes overtaking more than easy, it makes it slightly perplexing for the obstacle ahead.

The old adage (or was it just a tyre advert?) goes ‘power is nothing without control’ – Porsche has thought of this too. A Macan Turbo with Performance Package also boasts a newly developed braking system, its six-piston calipers grip 390mm grooved discs, 30mm greater in diameter than the already meaty stoppers fitted to the Macan Turbo 95B.

In addition, Porsche Active Suspension Management (PASM) ensures this model sits 15mm closer to the ground with the option to stiffen the ride for more frisky driving. Self-levelling air suspension is an option to, at the push of a button, provide an extra 10mm of height adjustment sitting the whole car closer to the road. With the (standard) Sport Chrono Package, Sport Plus mode matches the chassis, engine and transmission in tune with the requirements of a more aggressive driving style, shift times from the seven-speed PDK double-clutch transmission are also shortened to deliver rapid acceleration. As with all Macans, Porsche Traction Management (PTM) ensures the active all-wheel drive system with electronic controlled multi-plate clutch, automatic limited-slip differential and traction-slip control remains. And mighty fine it is too. It all sounds like a tasty recipe, but its true ability only really comes to light from behind the wheel.

We step into this Agate Grey Metallic Performance Pack the very same day that Porsche officially breaks word of the new Macan at the Shanghai motorshow – it seems rather apt. Like most press cars this vehicle boasts a number of options designed to best showcase the model, this means that despite prices for the Macan Turbo with Performance Pack starting at £69,505, the vehicle you see in our pictures is priced with options (some from the Porsche Exclusive Manufaktur range) at £85,485. A sizable chunk of that money has gone into the right areas – namely the chassis with; Porsche Ceramic Composite Brake (PCCB) at £5,463, air suspension and PASM at £1,004, and PTV Plus at £1,011. The metallic hue and matching Agate Grey / Pebble Grey two-tone leather interior accounts for a further £2,008, the ‘Turbo Exterior Package’ for £4,119. The aforementioned exterior pack adds PDLS Plus LED headlights, tinted LED tail lights, 21-inch 911 Turbo Design wheels (painted in black gloss), SportDesign mirrors, a host of black trim, a colour-coded roof spoiler and a sports exhaust system. There are further interior options, comfort and convenience features, though many add the impressive look of this particular vehicle, unlike the chassis additions we’ve already mentioned here they’re ultimately ‘nice to have’ and far from essential.

I have to confess as much as I adore driving Porsche’s conventional sports cars (read 911, Cayman, Boxster) of its SUV offerings I do have something of a soft spot for the Macan. Its levels of comfort, exceptional driving position and ability to shrink around you as a driver are tough to beat on a long journey, any journey actually. However, up until now I’d have told you that a diesel variant was the only way to go – the Macan Turbo with Performance Package might just have changed that view which, given the apparent absence of a derv sipping version these days might be just as well.

In this vehicle we truly do have the best of both worlds; comfort, luxury and utterly superb build quality with Porsche levels of performance that simply blow you away. You might well feel the need to launch this machine off the lights to experience what a low 4secs to 62mph time feels like in a 1,925kg SUV. While that’s likely to impress the most beneficial (and therefore actually impressive) aspect of this model is its overall drivability. The bulk of its torque is delivered between 1,500 and 4,500rpm, which ensures that making progress out of those big roundabouts which interrupt major dual carriageways what the kids might call: ‘laugh out loud’ amusing. In this car slowing into said roundabouts from speed is a breeze thanks to this model’s ceramic brakes, with simply incredible stopping power offered to your pedal with both lightness and feel. They never fade not matter what you ask of them.

Surprising not only yourself as the pilot but almost everyone else on the road around you (especially outside lane hogging Audi or BMW drivers or, in one instance for me, a now disappointed Jaguar F-Pace customer), the Macan Turbo with Performance Package is more than willing to demonstrate its performance credentials whenever you might wish. Its devastating ability in the 50-70mph acceleration window (even without Sport Plus mode activated), coupled with the addictive and commanding noise it makes in the process from – this particular car’s – Sports exhaust, is remarkable. But this isn’t just a motorway munching machine, it’s capable in the turns too.

Part of what makes any Macan so pleasant to drive is its neutral handling balance, it’s lithe and yet confident even when you ask it to do things no SUV should rightly oblige. That is amplified here, more so with the (optional, remember) air suspension set to its lowest height. The vehicle hunkers down and sweeps through corners as if magnetically sucked to the road, while it will pitch and roll a touch (as any vehicle of this type or weight will) you can use the transfer of weight to your advantage as you send it into corners. In addition of course it will allow you to tailor its various settings individually to best suit your driving style. No vehicle this large has the right to be this much fun to drive, yet this one is.

Naturally drivers of these vehicles won’t always be charging through A-road roundabouts, attempting to out-brake the nearest super saloon, or carving through the countryside repeatedly stamping on the accelerator pedal, but you’re covered outside of those instances too. The Macan Turbo with Performance Package will return up to 30mpg and seat five occupants (and swallow whatever luggage they see fit to bring) in superb comfort, which when you consider the range of things you’re asking it to take in its stride is damn remarkable. This vehicle has to be a relaxed motorway cruiser, a blast to drive on back roads, capable off-road (which I hear from reliable sources that it very much is), and a comfortable, proficient, town tool. One minute it must deliver 440hp at a moment’s notice, the next return 30mpg. In my book the performance and dexterity it offers on tap qualifies it as a bonfire Porsche, its practicality and comfort as one of the best SUVs currently available. Surely the next iteration of Macan will generate a similar model with more of everything? That’s an exciting prospect…