My life in cars – Ray Calcutt 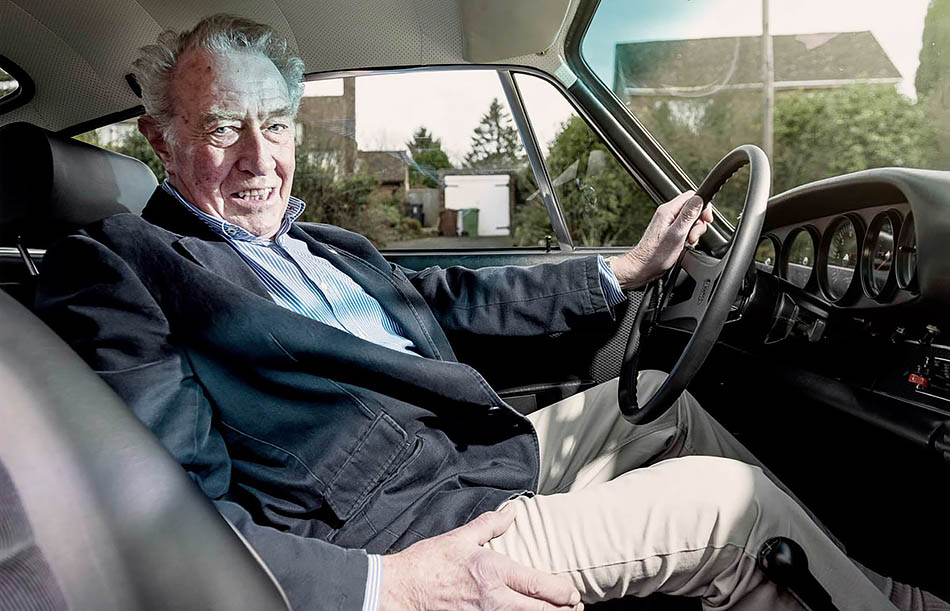 MY LIFE IN CARS

‘I grasped every opportunity I could to drive’

Racing driver and instructor Ray Calcutt cut his teeth on a trackprepared Sunbeam Rapier then campaigned Sunbeam Tigers, Hillman Imps, Formula 3s and 5000s and the McLaren M18 over a career spanning 40 years. He achieved seven consecutive wins in a Fraser Imp and drove a Lenham P99 to class victory in the STP Motoring News championship. Sadly, plans to install a BRM engine and enter it at Le Mans never materialised.

‘My first time behind the wheel was as a child in a toy pedal car, he says. ‘I’d tear down our sloping garden and there was a sand pit at the bottom which was my run-off area. My mother was convinced I’d hurt myself but I never did. My first chance to drive for real was in 1949 at the age of 12 in an old sidevalve Ford pick-up down a private drive to a market garden. I quickly realised I had a strong interest in cars and motorbikes, and from then on I grasped every opportunity I could to drive.’

Ray joined the Metropolitan Police Force in 1953 as a cadet based at Hendon before moving on to stations in Soho, Paddington Green, Brixton and Wapping. But it was always cars that really grabbed Ray’s interest and after two years in London he transferred to the Police Traffic Division, based in Maidstone. ‘At the time they were using Austin A95s and A110s, which were fast and capable cars,’ he says, ‘especially when responding at high speed to attend a serious traffic accident. Coincidentally a mate of mine, John Groves – who was also a police officer at Maidstone – was keen on rallying. On one occasion he borrowed a Saab 93 and asked me to drive while he navigated in an event around Romney Marsh. We did very well and finished well up the field but I was more interested in racing.’

Another friend of Ray’s, Norman Winn, worked in the competitions department of Alan Fraser’s Team Fraser Racing and Ray took every opportunity to drop into the workshops. ‘Alan was such an important man in my life because it was he who gave me the opportunity to start racing,’ he says. ‘One Friday in October 1963 he invited me to join him at Brands Hatch the following day for a test drive in a Sunbeam Rapier. Five months later I entered his ex-works Le Mans Sunbeam Alpine into six races and under observation from Alan I successfully applied for my racing licence.’

Fraser was a successful rally driver in his twenties before setting up his own team, first campaigning Sunbeam Rapiers then Alpines, Tigers and Hillman Imps in races and international rallies. In 1965 – the Fraser Imp’s first full year – Ray competed in 30 events resulting in eight firsts, five seconds, ten other awards and three lap records at Brands Hatch and Silverstone in the up to 1000cc class.

In 1966 he won the Ilford Films Championship and was runner up in the British Saloon Car Championship, also driving a Fraser Hillman Imp.

Think the Sierra Cosworth’s wing was all for show? Not so, says Ray. In the driving seat – just where Ray Calcutt loves to be. Ray loved his Austin Eight Tourer – he kept it for 10 years.

‘I bought my first car – a Morris Minor – in 1956 and replaced it soon after with a Rover P2 16. They were both cheap runarounds but the Rover was pretty thirsty so I started to look for something different and a bit better. My 1938 Morris Eight had hydraulic brakes which made a huge difference – the equivalent Austin Eight of the same era used mechanical brakes. A neighbour in Speldhurst had a similar Morris so I knew they were nice cars.

He had lost interest in it and stored it in a lock-up garage. I paid about £60 for it in 1960 but I soon regretted selling the Rover because it had a fluid flywheel and a freewheel facility. The Morris was no long distance car so I sold it in 1962 for £100 and bought a Triumph TR2.’

‘I bought the Austin Eight in 1970 for about £200 from Brighton & Hove Motor Club member Horace Appleby. It was a 1939 model with the alligator grille, sloping rear and cabriolet top, which made it a rare car. I spent a lot of time trying to find any evidence that it had been built by a specialist coachbuilding company but found nothing.

‘I liked it so much that I kept it for over ten years. It was a lovely car to drive on sunny Sundays with the top down to a point-to-point. Sadly, although the garage I had in Speldhurst was quite large it wasn’t quite big enough for the Austin and a friend persuaded me to sell it to him.’

‘My racing days had a profound effect on the cars I chose for pleasure. I’d always dreamed of owning a Porsche 911 and went for a drive in one owned by a friend. It was a defining moment in my car-owning career.

‘I’d been racing at Mallory Park in 1974 and got chatting to a chap who owned a 911T which I offered to buy. I covered a lot of miles in it and loved the way it drove and handled. We had a cottage down in Cornwall at the time and it was always a pleasure to drive it down the A303 and A30 when there was very little traffic about.

However, I quickly learned a lot about Porsche foibles, such as the hugely expensive heat exchangers and how rust could attack them behind the headlights. At the time I thought it went like a rocket ship. Then I tried a friend’s fuel-injected 2.4S model and could see how much quicker it was. Not surprisingly I sold the 911T four years later and bought a 2.4S.

‘I bought a Targa after that but it leaked and the body flexed – it never felt anywhere near as solid on the road as the coupé.’

‘I decided to buy a Sierra RS Cosworth after chatting with racing driver Andy Rouse – BSCC champion in 1975, 1983, 1984 and 1985 – who raved about it after testing it at Donington Park. I bought my Moonstone Blue car new in 1987 for £15,950 from Tunbridge Wells Ford dealership Stormont Engineering. There was no demonstrator available so I couldn’t testdrive it beforehand. The wonderful thing about it was that the acceleration was just explosive. On the rare occasions when I stretched its legs I could feel the downforce created by the huge rear spoiler. I kept it for two years before selling it through the Sunday Times for a small profit.’

‘One day in 1964 I was at Alan Fraser’s garage and spotted what I thought was a left-hand-drive Sunbeam Alpine. In fact, it was one of the first Sunbeam Tiger V8s off the production line. Alan said I should take it for a drive so I took off in it to explore its performance around the lanes of Kent. ‘Little did I think that from driving that early left-hand drive Team Fraser Tiger in 1964 I’d be taking part in the British Saloon Car Championship two years later, lying fifth with the likes of Gawaine Baillie and Jim Clark. Then there were the laps of honour on the occasions when I won in the Fraser Imp. At Brands Hatch spectator’s cars would be lined up on the south bank with their headlamps on and their horns blaring; they were very special moments.

‘The Tiger always reminded me of driving Alan’s fully modified Marque Tiger with its Weslake cylinder heads and the Group 3 Tiger, which was a modified road car. On one occasion in 1966 I won at Brands in the BARC club meeting driving that car. ‘I bought my roadgoing Tiger in 1990 from a company near Gatwick Airport that specialised in rebuilding them. It was a 1965 MkI model with the 260ci engine and it went like stink, but I quickly realised that it needed a five-speed gearbox because it was very tiring to drive on long journeys. ‘It was a very special car and I kept it for seven years. I only sold it to buy a Porsche 911 3.0 SC. It was the attraction of Stuttgart yet again.’

‘This car was a pure nostalgia trip for me. I once worked at Brands Hatch as an instructor for the Motor Racing Stables and we used Lotus Elans as the school cars. Tony Lanfranchi and I would go out supposedly to warm the cars up and we’d end up screaming around the short Club circuit. After that I did some work for Bonhams at Goodwood and met a guy from Cambridge who wanted to sell his 1967 Lotus Elan SE. It took me straight back to my instructor days and I bought it at the end of 2003 for around £11,000.

‘I know the old Lotus acronym, ‘Lots Of Trouble, Usually Serious’ and mine was no different. Though its issues were mainly niggling things like the time when a catch failed and the bonnet flew open when I was on my way to a charity event at Goodwood. ‘I competed in the Norwich Union rally in that car. It was a fun day out starting at Brooklands and finishing at Silverstone. It was immaculate, but somehow I was always a little disappointed with it and eventually sold it in 2005 and bought a Porsche Boxster. I was never really comfortable with that car either because I have long legs. It was one Porsche that I didn’t fit in to.’

THE ONE THAT GOT AWAY

‘Of all my cars the Porsche 911 2.4S was particularly special because its performance set it aside from my previous 911T and the Targa model that followed it. I knew it would appreciate in value but never dreamed that it would rise to the heights it has achieved today. It was very much a classic of its type and time; my 3.0 litre model was faster but somehow lacked the 2.4s’s individuality. I really regret selling it.’ Thanks to Paragon at Five Ashes, Sussex for the 1972 911 2.4S.