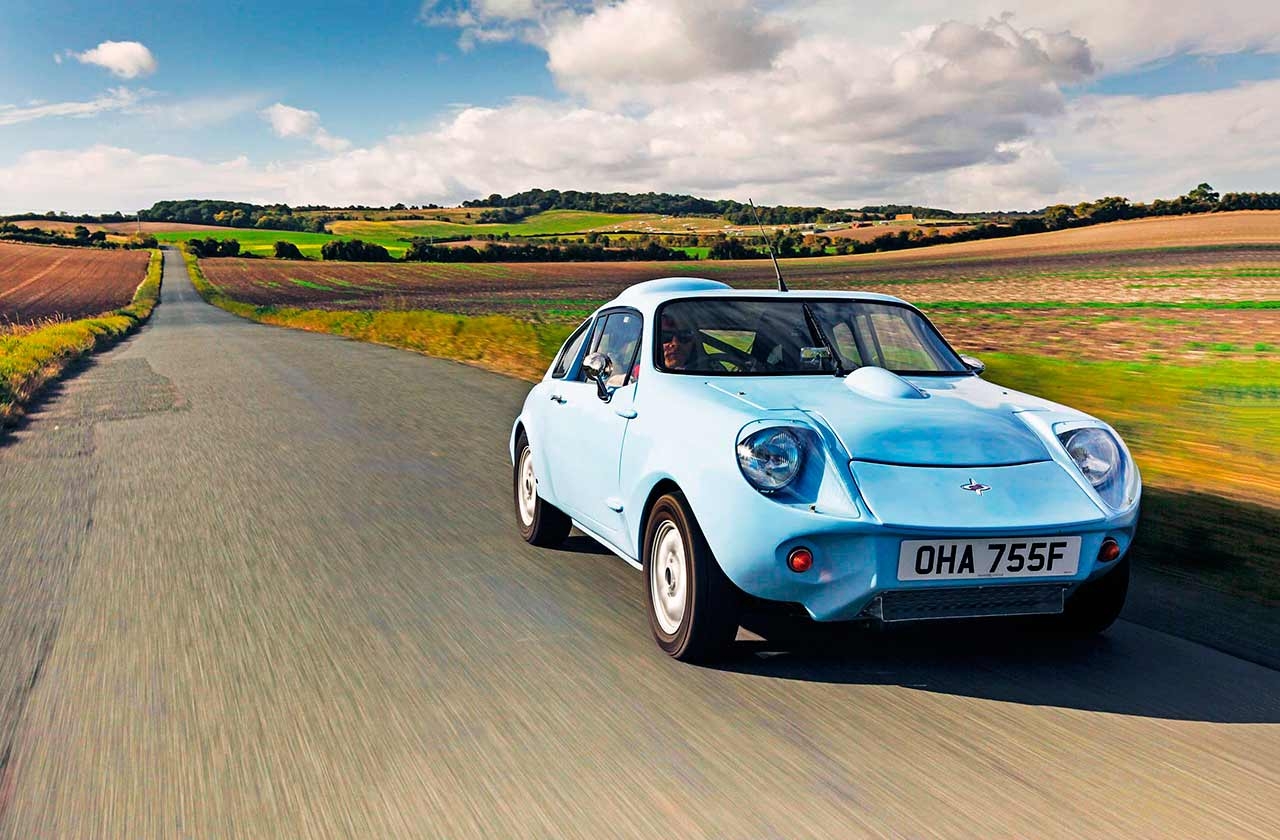 Jem’s Pocket Rocket. Mini Marcos. Making the most of Issigonis’ marvel. Its styling may divide opinion but, as James Elliott discovers after a bracing drive, the Mini Marcos has a beauty that goes beyond mere cosmetics. Photography Tony Baker.

Was any car ever designed with such singularity of purpose as the Mini Marcos? This tiny, squat, beetle-backed fizzbomb might not please every aesthetic sensibility, but it does exactly what it was intended to do. Just 1275cc of transversely mounted workaday A-series engine fed by a single SU (in this example, anyway – no two seem to be the same) sends this little terrier shooting down the road. You can keep the throttle wide open to help it clear its throat with each upchange, the rasp through the pea-shooter exhaust rising an octave each time the revs trebuchet into new territory. It’s remarkable. As is its history. 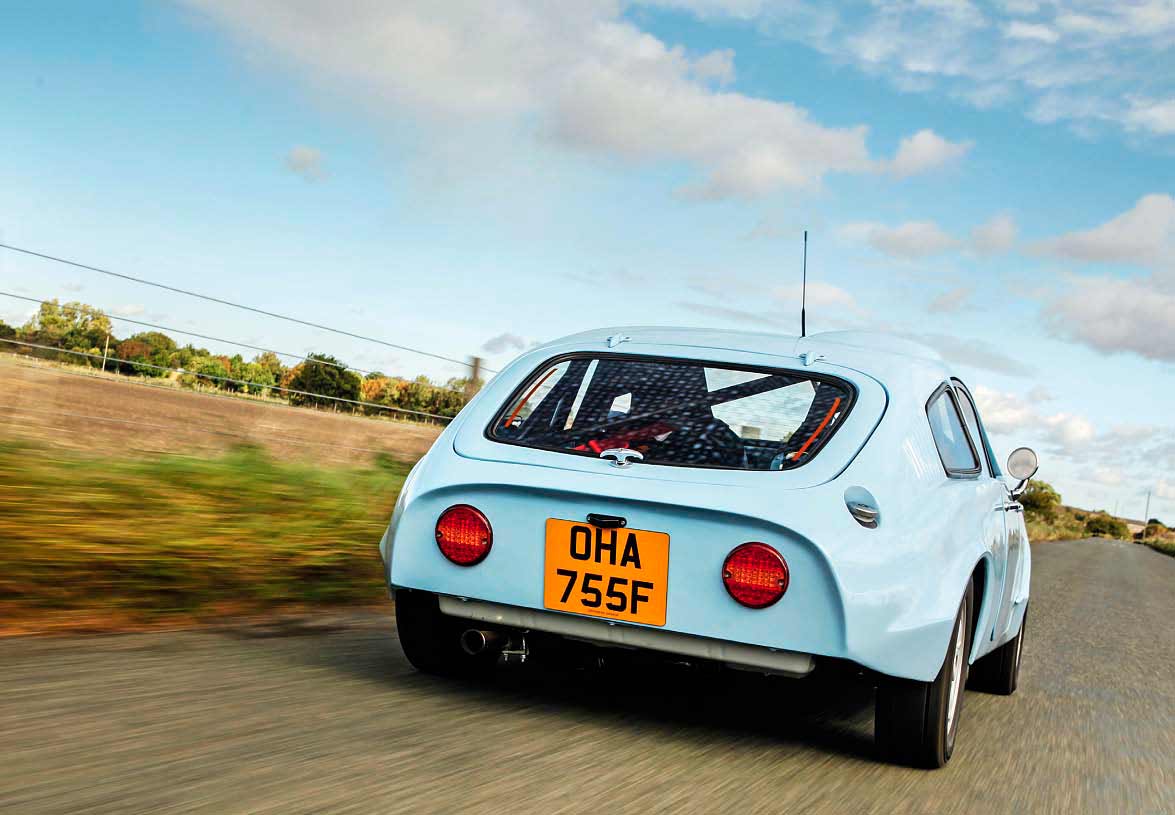 Tracing its lineage back to Dizzy Addicott’s famous DART, the Marcos spearheaded a raft of racing specials based on the Mini, but lighter still. Thanks to Issigonis hanging pretty much everything off a couple of subframes, you can simply take all those mechanicals and transfer them into a lightweight shell.

OK, that’s oversimplifying it, but Jem Marsh and his Wiltshire-based cohorts were not alone in following the formula, and the fact that you can still buy a brand-new example today from Rory McMath’s Marcos Heritage outfit illustrates how successful it was.

Addicott’s car, which was shown at the Racing Car Show in 1964, had been planned to be aluminium but was eventually built in steel. The car was so well received that Addicott wanted to put it into production as a GRP-bodied kit, for which he turned to Jem Marsh for assistance.

Almost inevitably the pair fell out, Marsh deciding to make his own car (the Mini Marcos), while Addicott sold the DART (Dizzy Addicott Racing Team) on to Jeremy Delmar-Morgan for £750. Delmar-Morgan based his Mini Jem on it, a project then picked up by Robin Statham and, when his company Fellpoint fell over, by High Performance Mouldings, which was just down the road from Marcos.

Like the Jem and the Kingfisher Sprint that appeared in the early 1980s, as well as the Midas Bronze (which succeeded and reinterpreted the Marcos), Marsh’s car used plastics. Making its official debut at the 1966 Racing Car Show – even though it had already raced nearly six months earlier – the Marcos’ sub-£200 price-tag was exceedingly low. Coupled with some giantkilling race success , sales were strong for such a niche product. Through six barely discernible variants, the Marcos has carried on erratically ever since, with up to 1500 kits and cars thought to have been sold.

Think Caterham on a smaller scale. And it is hard not to think of Caterham because all the DART derivatives share that oneness between driver and machine and all have endured against the odds. That’s because – whatever the marketing men tell us and however much manufacturers now try to detach the driver from the actual driving – there has always been a group of enthusiasts for whom the joy and exhilaration of such cars will overcome all obstacles. Like the Caterham, these cars have refused to die.

That’s not to say that they haven’t had a few lengthy catatonic episodes, but the fact that generation-old kits are still being made up and new examples are being bought speaks volumes about their enduring appeal.

This car – just out of a meticulous build by Peter Bremner and freshly purchased by archeclecticist Philip Joisce – is a prime example.

The slide-down glass windows, exterior hinges and other features hallmark it as an early shell (though not a Mk1), but some of the finish does not. There is a reason for that: the pre-build intention was to take it racing and that means that its originality was compromised for the small practicality of staying alive. As a result, period pieces such as the dash-mounted mirror and the doorpulls make uneasy bedfellows with the modern internal doorhandles, hi-fi and Metro stalks. Such expedience also adds racing seats and harnesses, plus a rollcage, all of which give a great deal of confidence.

In fact, only the deafening, high-pitched bleeping when indicating needs to be disabled pronto, purely on annoyance grounds. Yes, I know precisely why it is there, but that wouldn’t stop me taking an axe to the dashboard to kill it. Even so, given the model’s longevity and continuity, such things don’t seem so great a crime in a Mini Marcos, especially one built for competition use. These were always kits, partsbin specials for the hard-up to go racing. Why should they be any different now? Besides, the driving experience is pure 1967.

The first surprise is how roomy the interior is. There is loads of space in the passenger footwell, a little less on the driver’s side, but with two cubbyholes on the dash (and no contrived rear seat, as in some variants), it is pleasantly comfortable. The central binnacle tells a story all of its own. Two familiar Smiths dials herald its roots, while the kill switch and fuel-pump switch signpost this example’s racing purpose, making the lack of a rev counter all the more bizarre. The rollcage is pleasingly unobtrusive, though you suspect that the hampered visibility would be excellent without it.

There is no need to prime the engine before start-up, but you do need to be on your toes to catch it when it fires. When you do, it quickly settles into an eager, busy thrum. Grab the high gearlever, slot it into first and you’ll need to give it a fistful of revs to get it moving. After that, unless you are braking, your right foot pretty much stays flat to the floor.

The short-travel throttle is just like any Mini, but the pedals hang very low. What would be a slightly awkward offset for the brake is compensated for by the pedal being twisted towards the throttle. Clutch operation, rather than being by toe or sole, is by heel. You rest your foot on the floor, effectively wedge the pedal under the heel of your shoe and then just rock your foot to deploy it. It’s not heavy, but you are well aware you are working it.

The gearchange has that familiar gappy feel, but is slightly more taut. It might not seem that great to anyone uninitiated in Minis, but it’s plenty good enough, and positive if you know what to expect and how to treat it.

You sit below the sill line and, because the Marcos is so roadhugging riding on its 165/60 R12-shod Minilites, that means your bottom is only just off the tarmac. You therefore feel every nuance, especially on the uneven B-roads where we tested it. Yet, despite the bumpy ride, it feels solid and, perhaps thanks to the rollcage, there is very little in the way of flex.

At manoeuvring speeds, there is no hint of this car’s greatest feature. When you are hauling the wheel round at walking pace, there are few clues as to how you will be able to flick the tiny three-spoke Mountney in your hands at speed.

It really is fantastically direct, one of the nicest-steering cars ever built. It feels strong and purposeful, taking corners brilliantly, with barely any roll as the negatively cambered front wheels swivel at the car’s extremities.

Overall performance is electric, like a Mini but so much quicker – and feeling even more so because you are aware of how much lighter it is. You’re changing up to fourth at 70mph, and that’s way short of using all the revs. Zippy just doesn’t seem a strong enough word because, on flat roads and when it has gathered momentum, it really flies. So, how to describe exactly how this car moves? ‘Scuttle’ is the word that springs to mind. And not scuttling like some everyday earthly insect, but like something from a sci-fi horror movie, a weird alien cutesie that makes you go “aaah” before ultimately growing into something altogether more aggressive.

As a driving experience, then, it’s all positive. But what about those looks? Personally, I am fine with the Marcos’ styling. It doesn’t scare, intimidate or repulse me, as it seems to some. I’m not sure the missus would warm to it if I used it as a daily driver (and you could, thanks to the practical rear hatch), but I think that something so tiny in profile, so low and with so little overhang is kind of sweet. Raised bonnet to accommodate the A-series, jutting jaw, full-nappy rump and all. There’s even a certain delicacy to the rear, despite the harsh docking of the tail.

Besides, this example is so beautifully, thoughtfully built – from the bezel window catches and the centrally parked wiper to the tennis balls that go in the door jambs to wedge them open – that it could never truly be ugly. Plus – I have said it before, but it bears repetition – nothing jinks around a roundabout as swiftly or with such aplomb as a Mini Marcos. And few, if any, road cars enable you to carry the same percentage of your speed through mild chicanes and esses while leaving you grinning maniacally. For that alone, the Mini Marcos should be forgiven anything.

“ON FLAT ROADS AND WHEN IT HAS GATHERED MOMENTUM, THE MARCOS REALLY FLIES”

No wonder the little Mini-based car generated such interest. In just two forays to the world’s most famous endurance race, it chalked up stats to melt even the most steely heart. In 1966, the French pairing of Claude Ballot-Léna and Jean-Louis Marnat piloted a Mk1 to 15th (and last) overall at La Sarthe; it was the only British car to finish. Using a Cooper ‘S’-spec engine, they averaged 90mph over 258 laps. In 1967, Jem Marsh – who admitted that he initially distanced himself from the previous year’s French effort until he saw how successful it was – fancied a crack. Partnering Chris Lawrence in a Mk3 (below left, during April’s Test Day), they retired with oil-pump failure, but not before reputedly recording an unthinkable 141mph down the Mulsanne Straight. It was an astonishing feat for the car to even be on the grid, however. After a protest from the first reserve, the ACO authorities took against the height of the windscreen, saying it was too raked, and threatened to exclude the car. They didn’t count on the determination of the team, who modified the bodywork overnight to fit a taller ’screen! 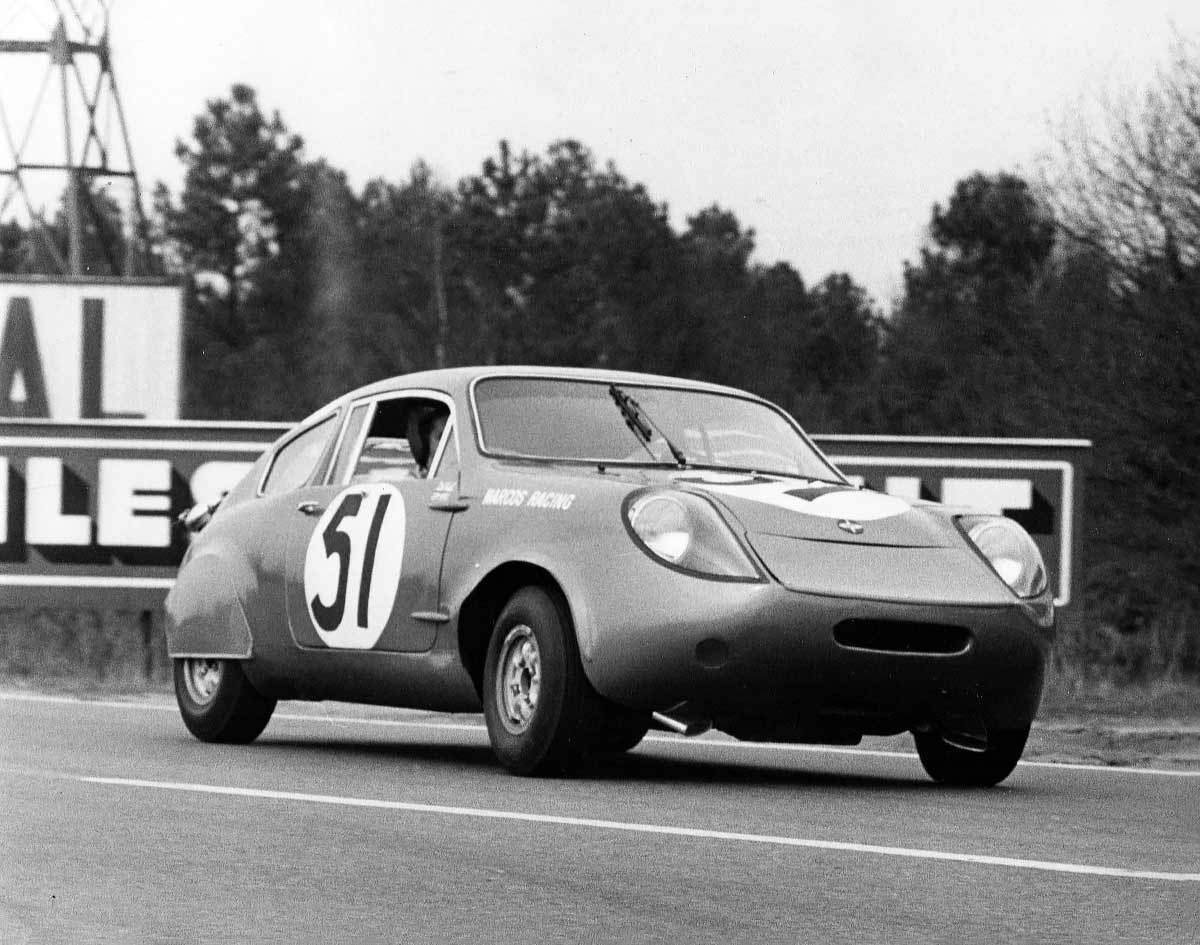 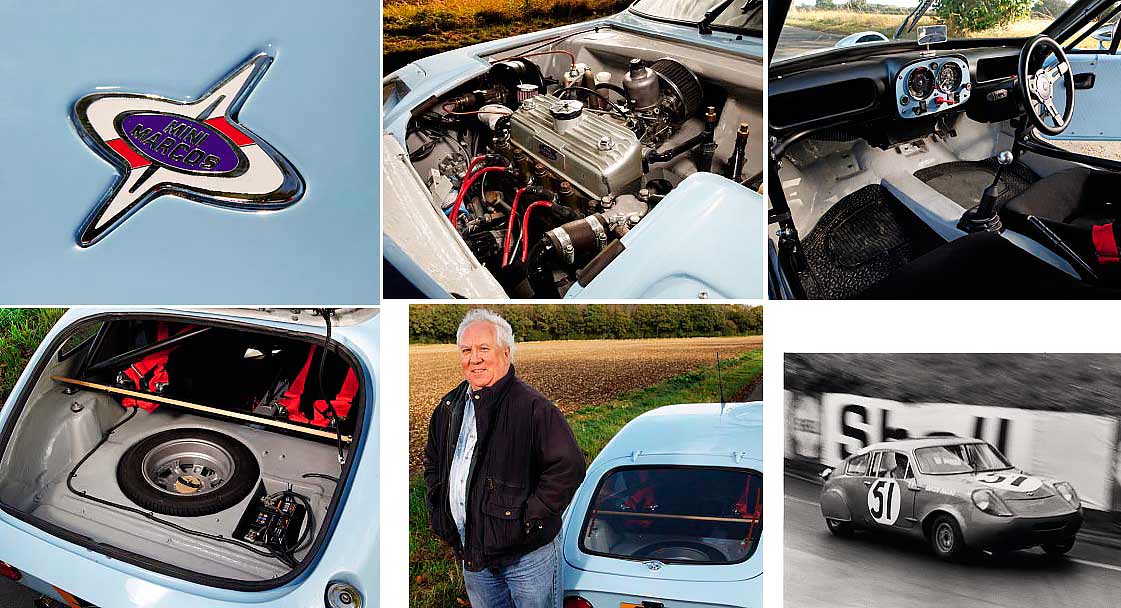 From main: Elliott even warmed to the truncated tail during his time with the car; low-slung profile shows off the minimal overhangs; owner Philip Joisce; neat compartments behind seats for battery and spare wheel.