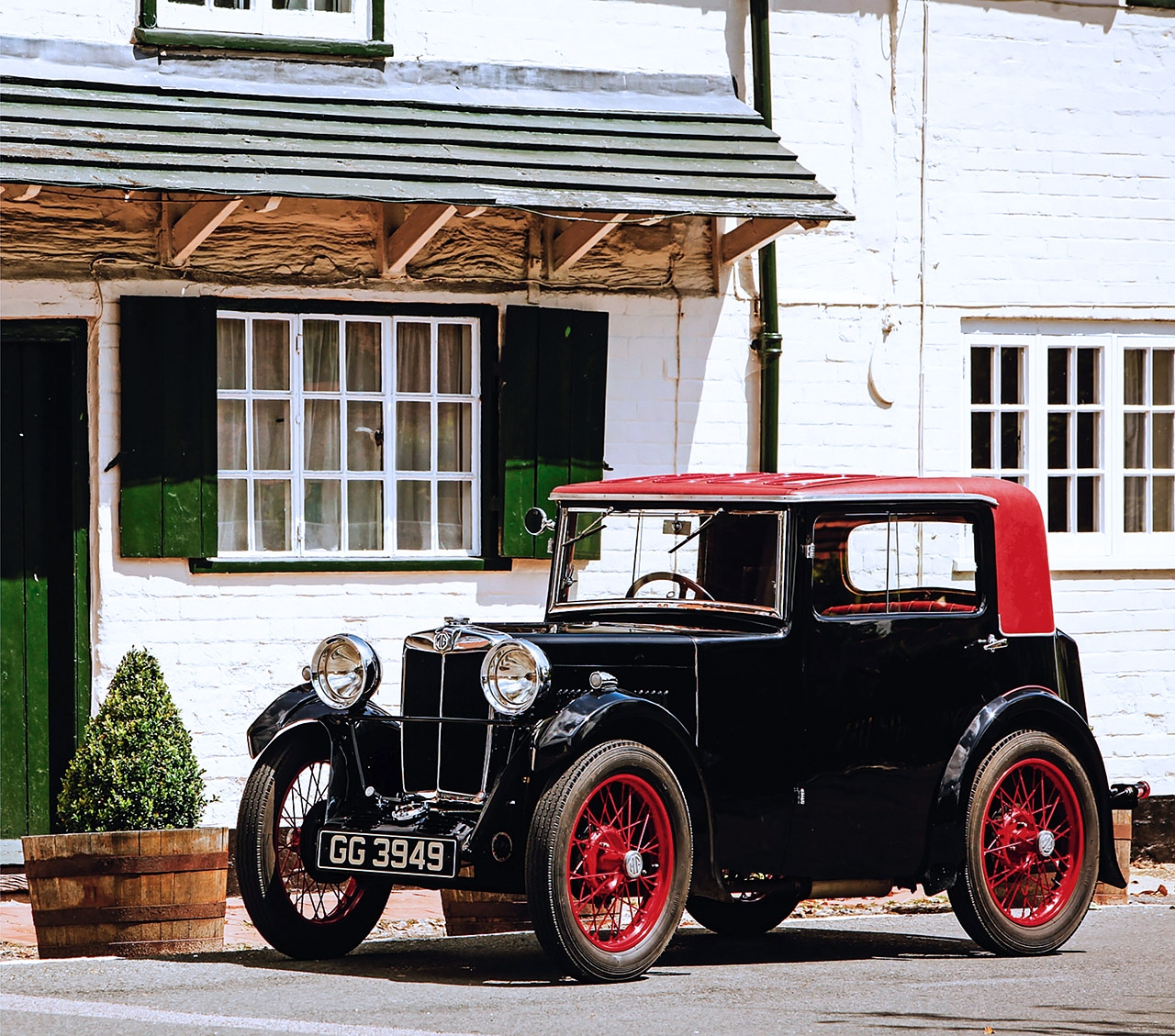 MG M-Type Coupe Abingdon’s cute Sportsman tested. When MG got in touch with its feminine side. The closed version of Abingdon’s pioneering M-type appealed to a different demographic to its open-top sibling, explains Jon Pressnell, and it’s a little charmer. Photography Tony Baker.

You don’t have to read between the lines too much to realise at whom the Sportsman’s Coupe version of MG’s first Midget was aimed. It was in fact the lady driver rather than the sporting male who was expected to buy the elegant little closed M-type. In a guide for salesmen, the word ‘dainty’ was bandied about, while other MG literature positioned the Coupe as ‘a fast tender to a large car’ – which was an indirect way of saying it was ideal for the lady of the house. Advertisements depicted two women in the car, doubtless appreciative of what in-house magazine The Morris Owner described as ‘the dainty exterior and downy comfort of die upholstery’.

Such buyers had a right to these delights, because the Coupe – fabric-bodied for most of its life – cost £245, at a time when the open two-seater ‘M’ demanded a more slender £185. The makers were unapologetic. ‘Coachwork of the MG Midget Coupe is admittedly high in price,’ conceded one catalogue, ‘but it is intended to appeal to the connoisseur, to those who want the very best in miniature cars.’ Else- where, the would-be buyer was told that the coachwork was ‘of the highest class procurable, and, except for size, is definitely produced to rank with the most expensive cars built’.

Take a glance at our featured car – a late, steel-bodied 1931 model restored under the direction of marque specialist and former Abingdon manMike Allison – and you soon realise that there’smore than a grain of truth behind the copywriter’s hyperbole. For starters, the MG – one of only five known survivors – does look spot-on, reminding you of how marque founder Cecil Kimber once said: ‘I believe in appearance as much as in performance.’

Instead of being a stubby brick-on-wheels, the Sportsman’s Coupe is airy and graceful, thanks to the snappy contrasting leathercloth roof and the clever sliding top, with its four stylish clerestory windows. The basically simple lines are accompanied by straightforward cycle wings, peaked in form and flared at their rear, and detailing is similarly restrained: chrome door hinges and a chrome-ringed Altette horn, recessed into the front apron, comprise the only flourishes. A smart feature is a dummy wing section forming part of the door, so that skirts don’t get dirty upon entering the car.

It’s all some way from the more contrived flashiness of the Swallow-bodied Austin Seven, for example. But then MG worked hard, with Coventry-based body supplier Carbodies, to evolve the final style: five slightly different prototypes – all duly photographed – were built before Kimber, with his acute eye for a good line, decided on the definitive format.

The interior is equally well judged. Generously stocked with classy black-on-white dials, the full-width wood dashboard has two closed gloveboxes and is complemented by deep wooden door cappings plus a wood windscreen surround. The windows are sliding rather than winding to maximise space and allow sizeable elbow compartments – forward of which are flap-cover map pouches. Again, it’s all in low-key good taste, with the wood being plain-grain mahogany with no inlays, and the trim being free of embossed patterns.

Bizarrely, the passenger sits semi-reclined and can gaze through the roof glass without having to look up more than a degree. ‘It is quaint to observe that when speaking to a policeman it is easier to address him upwards through the open roof than normally through the window,’ commented The Autocar in its road test.

There was never any pretence by MG that the Sportsman’s Coupe was anything other than a two-seater, but behind the pneumatic-cushioned bucket seats there is nonetheless an upholstered bench – perfect for the family dog, as a baggage platform, or as emergency accommodation for a small child. Remove the backrest and the space in the modest boot can be usefully augmented. Handy pockets at the rear supplement those in die footwells, so the lady driver would have had plenty of room for her impedimenta.

Underpinning all of this are the familiar mechanicals of the M-type Midget – familiar not least because they are in essence the same as those of the original overhead-camshaft Morris Minor that was also announced for the 1929 model year. While MG was at its Edmund Road premises in Cowley, the first M-types used complete rolling Minor chassis supplied from the nearby Morris works. The springs were flattened, the steering column raked more sharply, the pedals altered and the long non-remote gearlever re-cranked, but other than fitting more efficient Hartford friction dampers the running gear was unchanged.

By the time that the Sportsman’s Coupe was announced in October 1929, however, MG had just moved to the famous Abingdon works, and as a result of this change the component parts were henceforth supplied individually from either Cowley or from die Wolseley factories in Birmingham. This gave MG more scope for specifying modified components, or otherwise improving the design.

Accordingly, for 1930 the ‘M’ lost the Minor’s transmission brake in favour of a revised and all-cable system with the handbrake operating instead on all four wheels. At the same time, the pull of the Bowden cables for the front brakes was improved, alloy-finned drums standardised and a larger-capacity cast-aluminium sump fitted. An uprated SU carburettor and a more efficient camshaft followed, boosting power from 20bhp to 27bhp, but strip away such details and you still had a Morris Minor underneath the MG’s smart coachwork. 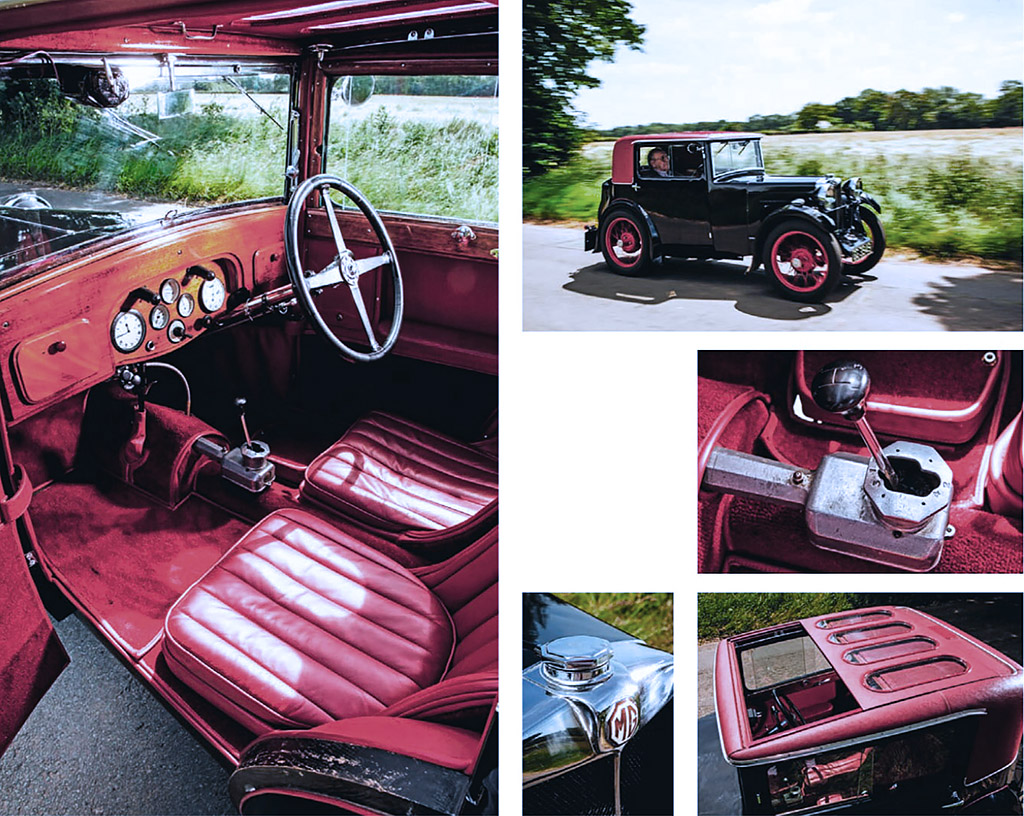 Clockwise, from left: catalogue said that dash was ‘a combination of beauty and utility without being in any way vulgarly ornate’; MG has nice turn of speed if you keep revs up; open gate for reverse- pattern ‘box; delightful glass-panelled sliding roof – a rear vent gives further airflow; octagon badge.

What this meant was a simple double-dipped ladder-frame chassis with semi-elliptic leaf springs front and rear, steering by worm and wheel, and a three-speed non-synchromesh gearbox. So far, so orthodox, but the feature that really distinguished the Minor – and therefore the MG – from its rivals was the overhead- camshaft engine. Part of the package that Morris inherited when it bought Wolseley in 1927, the 847cc ‘four’ followed existing Wolseley practice and could trace its design back to the Hispano-Suiza aero-engines that the company had built during the Great War. Its key feature was the bevel-gear drive of the overhead camshaft, via a shaft that doubled as the armature of the vertically disposed dynamo.

This zippy little unit had two main bearings, the front being a ball-race, and was initially deemed too powerful for its intended Morris home, with the result that it was detuned for use in the Minor. To say that it had great potential would be to understate the case: it provided the building block for specialised MG power units that ended up developing as much as 146bhp, or more per litre than was mustered by the V16 Auto Union Grand Prix racers.

That was all a long way in the future, though, and on its initial 20bhp the M-type was good for just over 60mph – the Coupe, which was 1 ½ cwt heavier than the fabric two-seater, was clocked by The Autocar at 61 mph against the open car’s 63mph. If those figures seem to accord ill with the ‘fierce’ performance that MG claimed of the car – describing it as a ‘pocket projectile’ – then bear in mind that at the time an Austin Seven would just about hit 50mph. The M-type was more than respectably fast for its era.

All the same, does the 11 ½ cwt Sportsman’s Coupe really manage to combine sportiness with its sassy; girl-about-town looks? Wedged beside the broad-shouldered Mr Allison in the narrow cockpit, our elbows overlapping, it doesn’t take long for me to find the answer: the MG is a genuine little sports car.

You certainly feel that the machinery is in the driving compartment with you, there being a constant coffee-grinder soundtrack. Become used to this, and you realise that you’re not going to abuse the mechanicals if you put some vim into piloting the M-type. “As with all ohc MGs, you’ve got to rev them to make them go, unlike most pre-war cars,” says Allison. “Keep it buzzing at 3500— 1000rpm and it’ll go quite nicely. It’s a sports car, basically, so drive it like a sports car!”

Follow this advice and you discover that the MG swiftly reaches 30mph, powers on to a comfortable 40mph, even with a slight slope against you, and adds another 10mph without getting out of breath. Hitting the 60mph maximum, though, needs favourable conditions, while if you do lose speed on an incline you need time and a lower gear to regain momentum. All the while, the little overhead-cam engine sounds suitably sporting, with a surprisingly deep burble for its modest size and output.

In this particular car, things are helped by the fitment of a Wolseley-made MG J2 four-speed gearbox with a remote: it was not unusual for M-types to be retro-fitted with a four-speed gearbox by the works. Equipped with a flipped gate – with third and fourth to the left, and first and second to the right – upchanges can be pushed straight through with delicious swiftness, assisted by a smooth clutch. Downchanges demand more technique if gears are not to be clashed. Having four speeds makes for good lugging power in third but, despite the added case of driving, Allison says he doesn’t find the regular three-speeder any handicap.

The steering is equally quick and light, requiring only minimum guidance. Indeed, it feels slightly disconnected from the road, something Allison attributes to a rearward weight bias with the car two-up. Ally this to a pitchy ride that has the MG hop-skip-and-jumping about on poor surfaces and you learn that the best approach is to let die car find its own course. This it does with a feeling of perfectly adequate security, and your confidence is further reinforced by the brakes. After some initial lost motion in the pedal they pull the Midget up well, and are undoubtedly superior to the sometimes challenging anchors on an Austin Seven. Allison, unsurprisingly, sees no need to upgrade an M-type to the hydraulics found on later Minors. 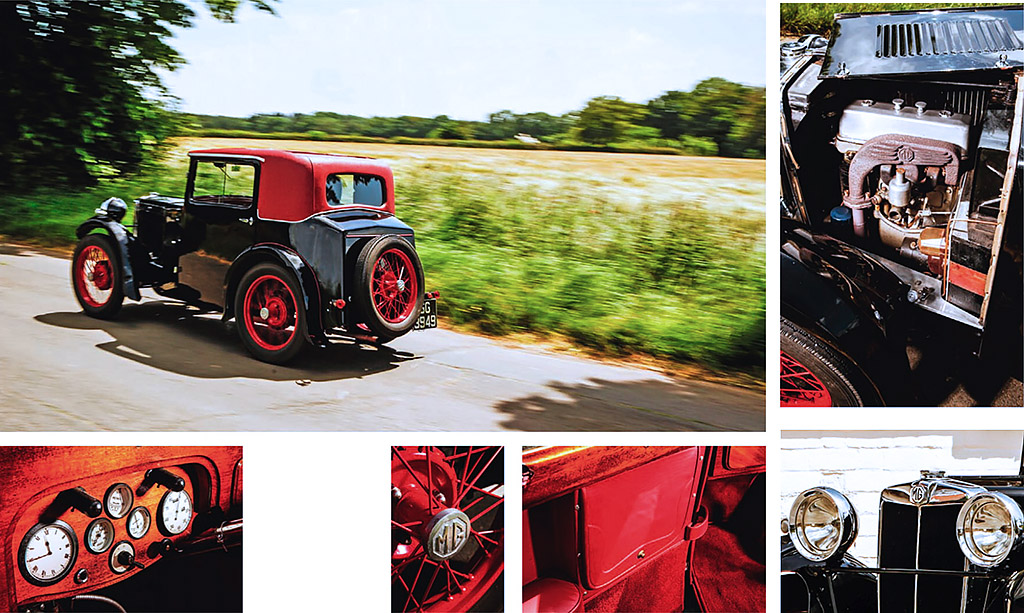 Clockwise, from above: fidgety ride can be unsettling until you adjust your inputs; doors house neat map pouches; wheels always matched roof and trim apart from on cream cars, where the latter was brown; single carburettor for 847cc ‘four’; elegant black-on- white instruments.

In no way compromised by its more elaborate coachwork, the Sportsman’s Coupe reminds you of how clearly, back in the late 1920s, MG’s first Midgets showed all the signs of being the start of something big. So it proved. In all, 3235 were made, the last in 1932; this was more than was managed by any other ‘cammy’ MG. That only 530 were Sportsman’s Coupes – 493 fabric-bodied and 37 in steel – makes the closed model something of a footnote to the story, but one that’s delightfully engaging all the same.